The History of Macaroni and Cheese

Today: The story of how macaroni and cheese became the American classic it is today. 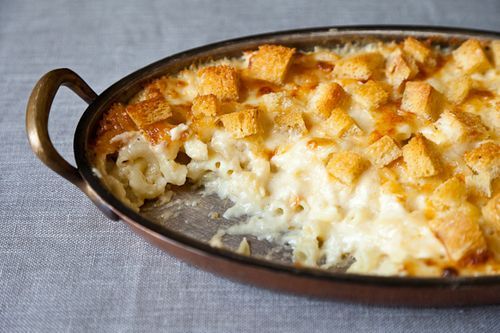 While American comfort foods are known for their simple preparations, one dish in particular stands out as endlessly versatile and universally loved: macaroni and cheese. From a backyard barbecue to an upscale restaurant (with a stop at the Thanksgiving table in between), this gooey, cheesy favorite is equally welcomed wherever it finds itself, in whatever iteration it may be.

Whether plasticky, marigold-hued, and concocted from a box, or topped with breadcrumbs, shaved truffle, or morsels of lobster, macaroni and cheese transcends boundaries, cultures, and food preferences -- exemplifying comfort, no matter what form it takes. But how exactly did this much-adored dish find its way to American soil?

Pasta and cheese casseroles are far from new -- recipes for early versions have been found in various 14th century cookbooks including the anonymously written Italian medieval tome Liber de Coquina (Book of Cooking), and the French Forme of Cury, which lists a dish called “makerouns,” combining thin pastry dough, cheese and butter. Thanks to these recipes, pasta and cheese casseroles gained popularity all around Europe, particularly in France, Italy and England. 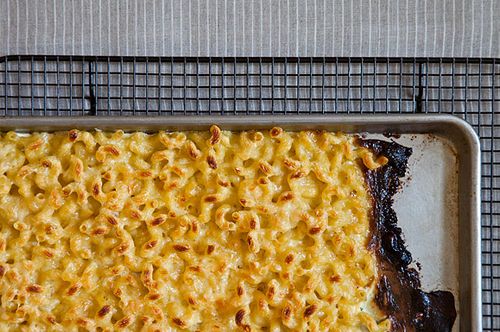 It’s unclear when macaroni became the chosen noodle in this dish, but the recipe in a more modern form emerged in Elizabeth Raffald’s 1769 book The Experienced English Housekeeper. Raffald included instructions for béchamel sauce made with cheddar cheese, and advised readers to top the noodle casserole with breadcrumbs and Parmesan.

Sources differ as to the introduction of Macaroni and Cheese to the United States. Some credit colonial settlers who may have brought over the dish from England, while others ascribe the introduction to Thomas Jefferson, who had sampled the dish in Europe and so enjoyed it that he attempted to design a macaroni-making machine. This didn’t go to plan, and he settled for importing the Parmesan cheese and macaroni noodles, and then serving the dish at a state dinner. Whether or not he introduced it, Jefferson’s appreciation for the dish and its place on such an important table was an inspiration to scores of Americans. The love for mac and cheese was born.

No matter how you like to serve and eat your macaroni and cheese, one thing’s for certain: it’s not going anywhere.

What's your favorite macaroni and cheese recipe? Let us know in the comments!

Karston October 20, 2016
I love mac´n cheese Pizza so much.It looks so
good.I wish I could eat it RIGHT NOW.

meenermax March 8, 2014
It's not just a national comfort food in America, but also here in Canada. When I made it for my son, I would use sharp cheddar for the sauce, and then layer the noodles and sauce with other types of cheeses (chunks of feta, bleu, german butter, Parmesan, fresh mozza, really ANY cheeses that caught our eye in the deli). And I would brown bread crumbs in butter and sprinkle them over the dish when it was done baking. I would broil it to finish, and serve. With the richness of this dish, it amazes me that we didn't have to roll ourselves away from the table!!

Gerald5001 March 8, 2014
I do not agree that M&C is greatest comfort food. I don't really like it unless I put in some ground beef (hamburger).

Ginny W. March 7, 2014
Oh my... Now I may want to start trying new M&C recipes...divine looking. I personally like to use Xsharp cheese and pimento in a basic recipe.

Viviana B. March 7, 2014
'Pasta al forno' is a staple in Italian home cooking. The 'sauce' is not cheese, but 'besciamella' (made of flour, milk and butter with a hint of nutmeg), with mozzarella and parmesan cheeses mixed inside and sprinkled on top. Many variations are possible, including mixing green veggies in (broccoli, zucchini) and red sauce-meat versions that taste like lasagna. Yummmm!!!

Carol March 7, 2014
It was always a main course when I was growing up. If times were good, and it was summer, mother would put slices of tomato on top. Never croutons. Maybe bread crumbs.

Eliz. March 7, 2014
Oooo, great topic! Might we get into Cultural Studies, too? Macaroni and cheese was considered a main course in the parts of the country I was raised. Yet it is merely a side dish in much of the southern United States, and in many African-American families.

MissWilliams March 14, 2014
I'm curious now where I would find macaroni and cheese as a main dish. In what parts of the country were you raised?

Eliz. March 14, 2014
MissWilliams, to answer your question: New England and the midwest. I suspect mac & cheese was a familiar, acceptable meatless dish during WWII and it held its place in family traditions long after rationing ended. Pure speculation. There are other factors to consider, but we are a people, after all, who find it acceptable to eat pasta (unbaked) and risotto either as side dishes or main courses instead of first courses.