Stinging Nettles and the Best Ways to Eat Them

Today: Cardoons aren’t the only vegetable with built-in armor. Meet a green that can put up a fight. 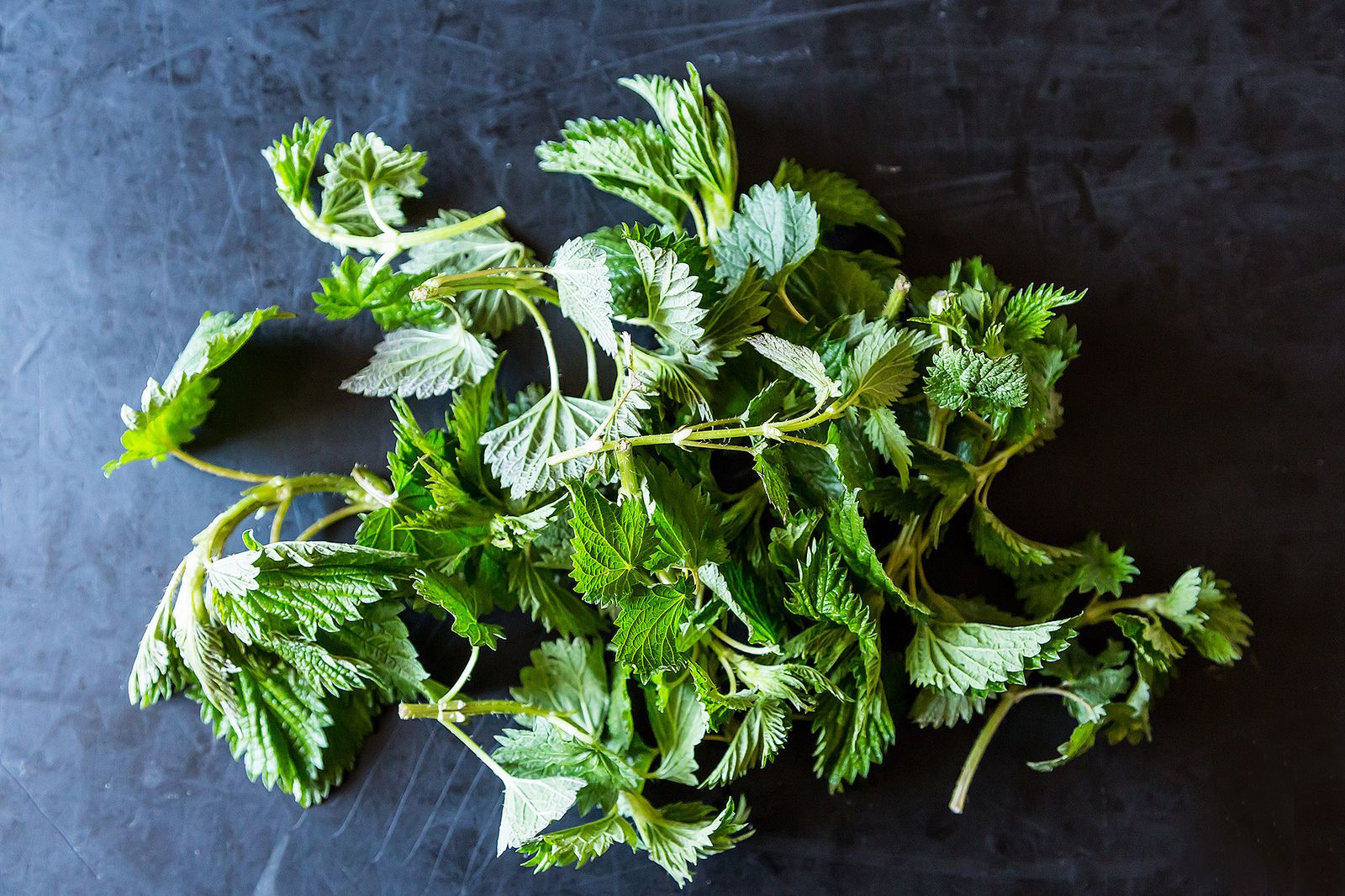 Like some of our other vegetal friends, stinging nettles are considered a weed, and in some areas, not just a weed, but an invasive species. Livestock consider it unpalatable. Oh that that “stinging” bit? The little spines or hairs (1, below) found on the plant’s stems and underside of the leaves are very irritating to human skin. If you brush up against them, expect an intense burning sensation (and maybe welts), thanks to toxins like formic acid, which you might be familiar with if you’ve ever met a fire ant. Why are we suggesting you eat this for dinner? As Michael Ruhlman says, “There’s a visceral pleasure to eating dangerous or forbidden food.” Plus they taste good, and are nutritional powerhouses -- so you should get to know your new favorite superfood.

More: If you have a few bunches of stinging nettles, you’re well on your way to 5 dinners.

Like chickweed, you can (responsibly) forage for stinging nettles, but don’t harvest nettles (or anything, really) near a well-traveled road (unless you’re going for an essence of exhaust fumes). You’re looking for the young nettles, ideally just the top bits of plants (2, below) that are less than knee high. Hugh Fearnley-Whittingstall offers further specifics, and suggests that you pick only the top 4 to 6 leaves, and he mentions not to eat stinging nettles once they begin to form flowers, because by then they’ve become “coarse and hoary.” If you miss out on perfect specimens right now, not to worry -- the plants will produce fresh growth again later in the summer. Or visit your neighborhood farmers market and pick up a bag: We’ll never tell. 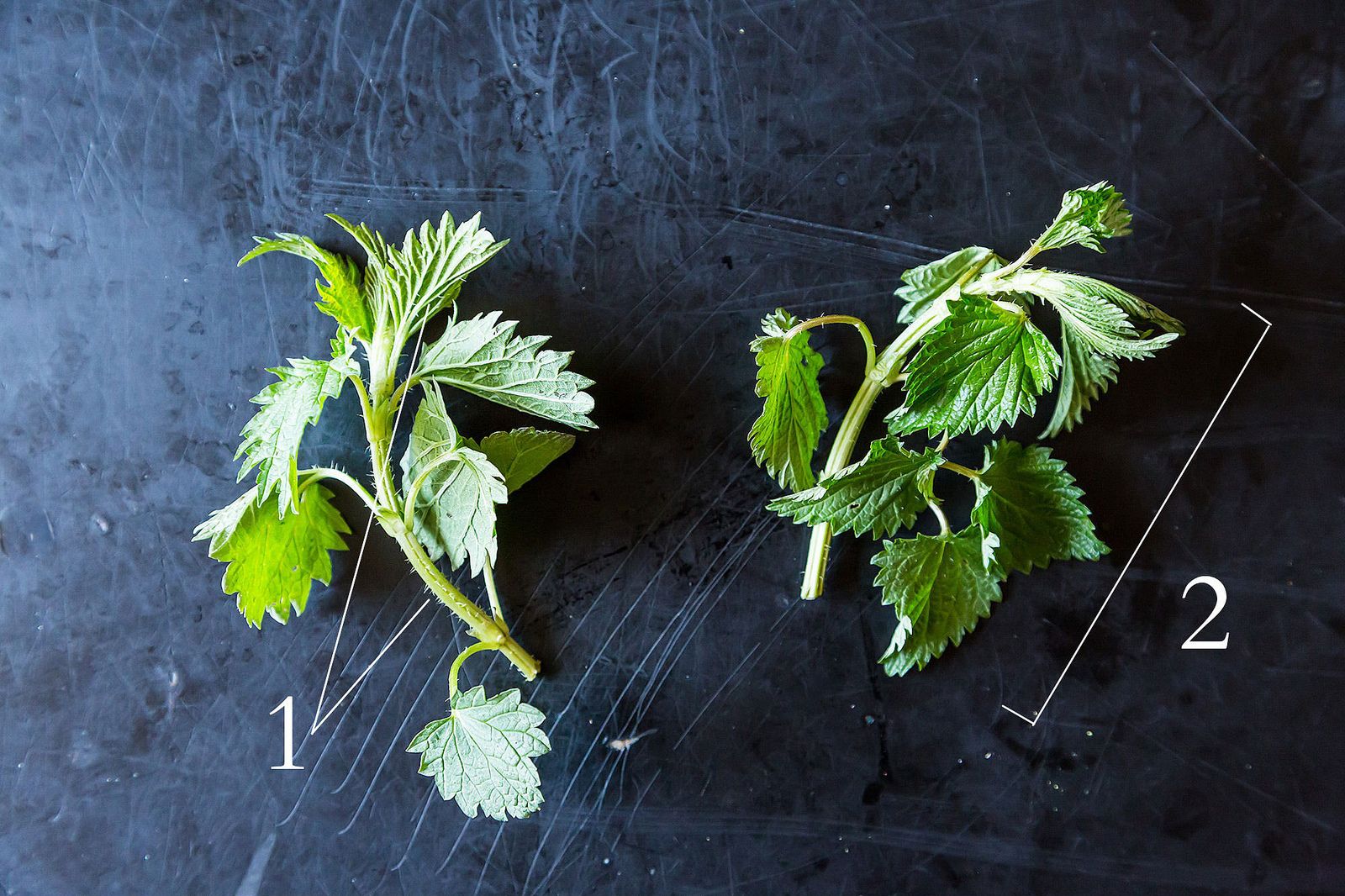 To prep your nettles, Hank Shaw recommends blanching in water that tastes like the sea, shocking them in an ice bath, then draining and drying them. (Don’t forget the gloves when you’re handling them -- but once cooked, their stinging powers are wiped out.) From there, you can freeze some for a taste of spring later on, or you can use them for dinner tonight:

Main Dishes
It seems like a vegetable cliché, but you can use your cooked nettles anywhere you'd use spinach. Try stinging nettles in pasta, either as a filling, or right in the dough. Use stinging nettles in spanakopita or a soup. Go for asparagus benedict on quinoa nettle cakes or use them to top a pizza like Chad Robertson does in Tartine Bread.

Tell us: How do you like to use stinging nettles?

HB30 April 21, 2018
My cooked nettles (I boiled them in water) still have the spines attached. Is that ok? Does that happen when you cook them?

Lindsay-Jean H. April 23, 2018
Sorry I missed this, hopefully you've put them to good use by now! Once cooked, the spines' stinging powers are wiped out, so you can handle (and eat) them freely.

luvcookbooks March 19, 2014
I bought some dried nettles in an herb jar on a whim. They are Turkish. Any ideas on how to use them?

Maedl March 19, 2014
You can use dried nettles for a herbal tea, or even add to pasta sauces. See
http://cedarmountainherbs.com/nettles.htm

Be aware, though, that nettles have medicinal properties, so don't go overboard on the amount you eat.

Valentina S. March 17, 2014
Oh, and! Aside actually putting nettles *into* ricotta/cheese gnocchi/dumplings (like you would spinach) you can make a killer risotto with it.

Also, the water left from cooking them is apparently amazing for washing your hair, as far as olden wisdom goes.

Valentina S. March 17, 2014
I put them to good use today! Nettles are a great addition to other mixed greens for pasta fillings. I just added the recipe for a vegan pasta filling including nettles here on Food 52, or they are also great in a classic greens and ricotta filling (this one: http://bit.ly/PJHmvU).

I once had a nettle and bean soup that I loved and I'd love to replicate!

CookOnTheFly March 16, 2014
Is there an acceptable green substitute? I'm allergic to both nettles and chickweed.

Valentina S. March 17, 2014
I believe that any 'wild' green could be a good sub. Nettles have a veeeery slight bitterness to them, but they are quite delicate. Something that comes close are dandelion greens, or, worst case scenario, spinach :)

Kukla March 16, 2014
During Spring and early summer I cook a delicious soup with Sorrel and Nettle, which are very popular in Eastern Europe. Sorrel has a natural sourness and Nettle a ton of vitamins. Blanched, nettles will keep their emerald loveliness even after a good 15 minutes of cooking, which makes any dish visually stunning.

Kukla March 16, 2014
Yes, you are right Maedl! It is Schav, which we call it Schav or Green Borscht.

Maedl March 15, 2014
I love to use nettles and other foraged herbs in a frittata. It always symbolizes a welcome to spring for me.