Today: In his first cookbook, My Irish Table, Cathal Armstrong takes us on a culinary tour of his homeland -- and gives us a recipe for mince pies. Leave a comment below, and you could score a free copy of the book! 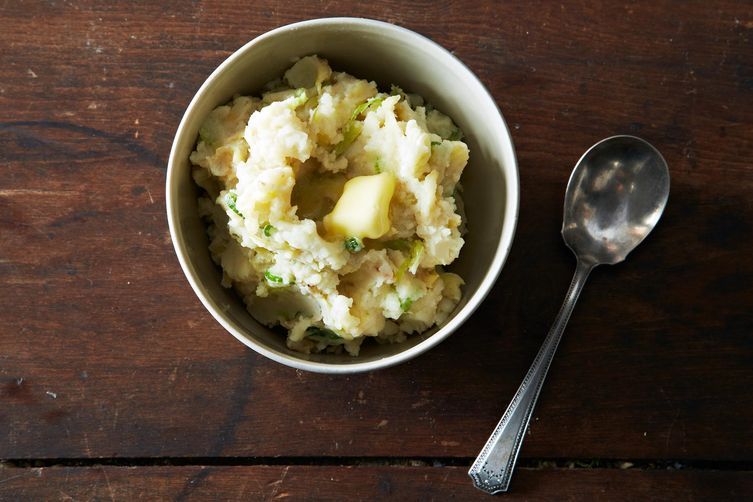 While reading through Cathal Armstrong's debut cookbook, My Irish Table, one phrase immediately jumps to mind: "the luck of the Irish." From the first page, the cookbook whisks you away to a land bursting with natural resources and people who know how to use them to their advantage. This certainly holds true for Armstrong's family of eight: From his father's backyard garden to Sunday dinners at Nana's, it's fair to say that cooking was in his blood.

After moving to the US at age twenty, Armstrong climbed the rungs of the culinary ladder until finally opening Restaurant Eve in 2004. Following in the tradition of Irish chefs, he scoured the markets for fresh, organic ingredients. Following his father's precedent, Armstrong then planted his own garden at the restaurant. Then he upped the ante: In 2010, Armstrong created Chefs as Parents to improve school lunch programs and educate families on how to eat more fresh, local ingredients. 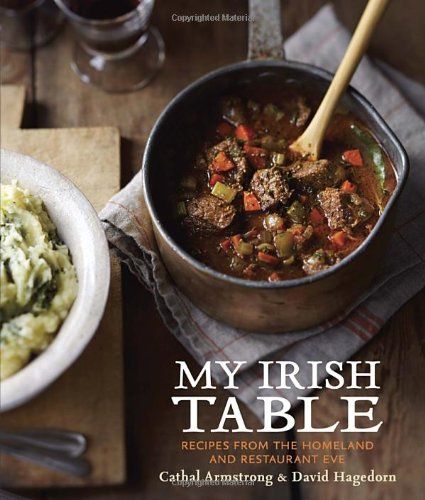 As Armstrong explains in the book's introduction, My Irish Table is more of a culinary coming of age story than a simple collection of recipes. The cookbook provides a loving look into a chronically underappreciated cuisine through the lens of the people, and the country, that taught Armstrong to truly appreciate food. Reading this cookbook is a bit like taking a trip through the rolling hills of the Emerald Isle -- one you're not quite ready to leave when you reach the end. Grab a pint of Guinness and prepare to fall in love.

Are there particular Irish ingredients, dishes, or cooking methods that don't translate over to your American audience? Any that are surprisingly popular?
One of my favorite ingredients from Ireland, which I miss dearly, is Dublin Bay Prawns. They are luxurious, super expensive, and, of course, extremely perishable. I would be willing to assume all risk to get them here in the States, but still no one will ship them to America. One dish you might be surprised by is our house-made black pudding -- it's actually very popular. I guess people are willing to try something new!

How did you strike a balance between the Irish cooking you grew up with and the American cuisine you experienced while working in the States?
My father was an excellent gardener. Growing up with a garden, and learning how to utilize it as much as we could, really shaped how I run my restaurants. I try and source from local purveyors and farmers as much as possible, and I added a garden in the back of Restaurant Eve to have access to the freshest herbs.

More: Armstrong's Corned Beef takes 17 days to make -- and it's worth every second. 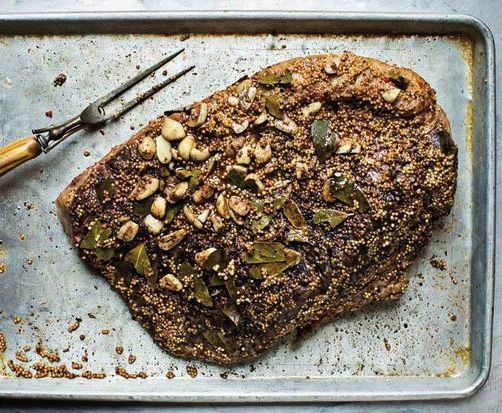 You're very open that the recipes in the Restaurant Eve section are not for the average home cook – why did you decide to include them in the book?
When I decided to write a cookbook, I wanted to make sure it was one that people would feel was accessible. I wanted to highlight the things that I ate growing up, things that I make pretty much as my mother made them. However, I also wanted to include a chapter to show what goes into "restaurant" dishes. That chapter, the one focused on the food of Restaurant Eve, is perfect for those who want to challenge themselves and prepare a restaurant style meal at home.

When you're feeling blue, which of your mother's comfort dishes do you crave the most?
Chicken noodle soup. I've cured people on their deathbed with this over and over again.

More: Got a craving for chicken noodle? Here's how to make your own, without a recipe. 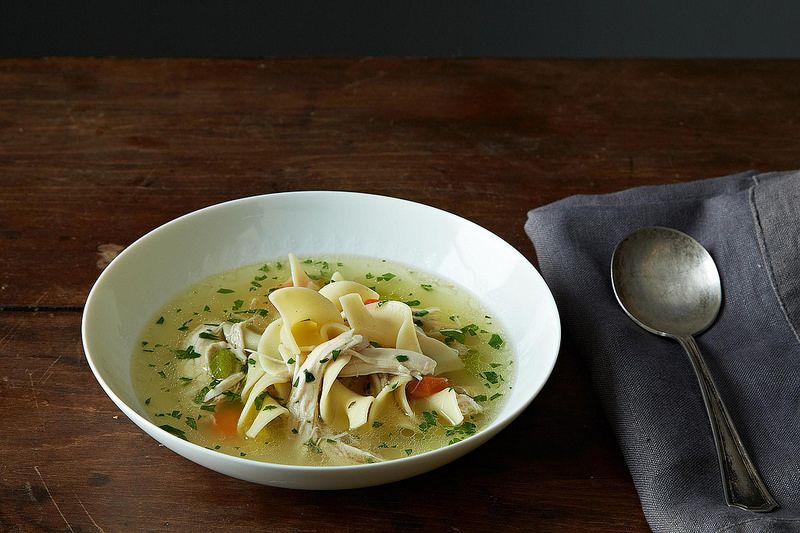 Your book is called My Irish Table: Recipes from the Homeland and Restaurant Eve, but it seems much more heavily weighted towards recipes from Ireland. Why did you decide against making it a purely Irish cookbook?
I wanted to make a personal cookbook book, one that is very autobiographical. I wanted to show that an Irish kid can become a successful chef in America. In that sense, it’s as much an American story as it is an Irish story -- my life belongs in both places.

In addition to your career as a chef, you're widely involved in growing the farmer's market movement, as well as putting healthier lunches in schools. Do you think you'll eventually become more of an activist than a chef?
The role of the chef has changed since I began my career in the restaurant industry. When I first started cooking, chefs were simple blue-collar workers. Now we have transformed into a community of leaders and activists. But I would not quit my career as a chef to become an activist -- being a chef is more fun. Besides, cooking professionally is one of those vocations that gets under your skin: It's more who you are than what you do. 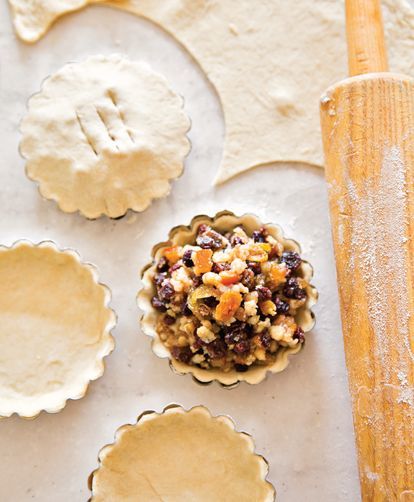 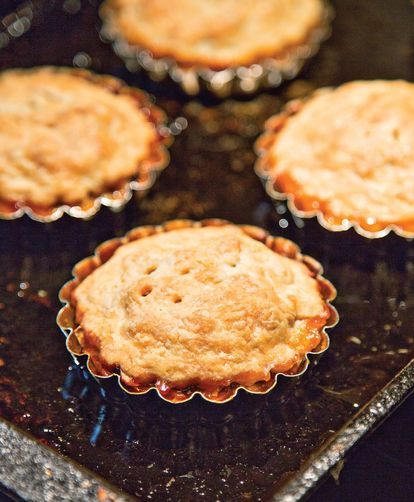 Makes 12 cups mincemeat, and a LOT of pies

See the full recipe (and save and print it) here. (Then make the mincemeat into the pies.)

Soup and colcannon photos by James Ransom; all other photos by Scott Suchman

We've giving away five copies of My Irish Table! To enter, leave a comment below: What recipes do you miss from your homeland, wherever that may be? We'll pick a winner at random at the end of the week! (Unfortunately, we can only ship domestically).

connieskitchen February 26, 2015
Just got an autographed copy. I'm thrilled with everything about this book

Michael U. March 20, 2014
My mostly Irish mother is always looking for new 'authentic' Irish recipes for her fab St. Patrick's Day dinners. I'm sure there are lots of good ones in My Irish Table.

natalie March 14, 2014
I miss crispy super-thin crust pizza - which I didn't realize was a midwestern/Ohio thing until I moved away :(

Sipa March 14, 2014
I've been wanting to eat at one of his restaurants maybe instead I'll make a meal at home using his recipes.

Jessica M. March 13, 2014
Those pies look AMAZING! A definite must try for the weekend.

Melanie A. March 13, 2014
This book is going on my wish list. Shame I didn't know about it earlier I could have surprised my son for his birthday.

Winifred R. March 12, 2014
First a comment about the recipe - mixed spruce? I think that should be mixed spice, maybe?

For what I miss: lobster dinners on the cheap by buying culls (one clawed), cheese that we joked was aged under the manure pile, ice cream from the dairy, and pick your own fruits so fresh that you taste tested in the field and had the best pies, cobblers and shortcakes all summer and from frozen the rest of the year. Central New England wasn't fancy but had it's plusses.

sexyLAMBCHOPx March 13, 2014
I think I recall a hotline question about Spruce and its culinary uses.

Marissa March 12, 2014
Living abroad makes me miss my father's perfect home-made lasagna! Even the noodles themselves are hard to find where I'm at now!

Cayla March 12, 2014
I'm glad to say I'm fortunate enough to still be able to go home to enjoy those family recipes quite often! :)

Erin March 12, 2014
I'm from Kansas, the thing I miss most often when I'm away from home is good barbecue. Kansas City is known for their barbecue and there's a reason!

AoibhinnGrainne March 12, 2014
My forebears were mostly Irish; but my Mother's Mother was German (near what was once Prussia). Mostly, I miss Nonny's Peach Tarts. I have her recipe, but it's a killer! Almond crust, custard-y filling, peaches on top...heavy with cardamom. You can taste the Scandinavian influence. Absolutely yum and fiddley as all get-out since they are the size of a single bite. Maybe I need to try them again, now that I'm almost 60 yrs old and much more experienced than the last time my late Mum and I tried to "translate" the 100+ year-old recipe...

Kelly March 12, 2014
I miss a local Mexican restaurant that was affordable, easy to get to, and provided so many memories for me and my family. Food is so important to forming bonds. I would love to win a copy. Thank you for the opportunity!

Susan March 12, 2014
Mincemeat pie is a holiday staple in my family. Thank you for the recipe to try for next fall.

Cindy F. March 12, 2014
Living in Colorado, I miss Seafood. You can get it, but not very fresh. I miss lobster and scallops, but mostly I miss mussles cooked in a white wine and rosemary.

Christine C. March 12, 2014
I would love to add some Irish recipes to my repertoire. My husband has Irish heritage, but the only Irish food we eat is corned beef and cabbage on St. Patrick's day.

Bridget C. March 12, 2014
I was born here in the states but have a lot of family back in Ireland that I visit. One thing I love that they all do is say welcome home everytime I come. Its so warming to the heart! Dublin bay prawns are amazing. But what I miss most is black pudding.