Today: Little balls of dried fruit and nuts, to eat at home or take on the road. 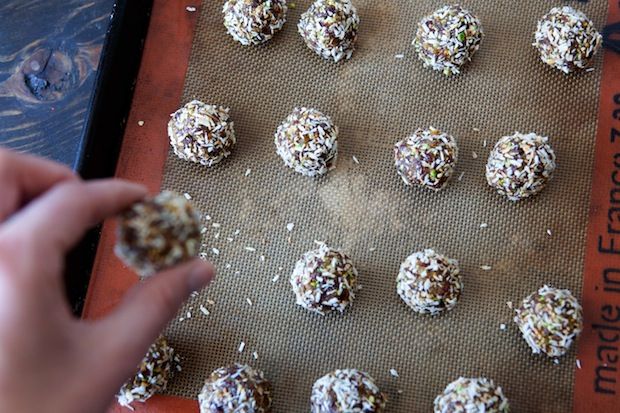 I thoroughly doubt it will surprise anyone to hear that I do not like breakfast-on-the-go (it has to be hyphenated because, as far as I can tell, it is a thing; a thing of the sort that earns its own write-ups in women’s magazines and the like). Perhaps I’m weak, but breakfast-on-the-go makes me feel queasy, a sort of existential queasiness, and makes the whole day feel wrong.

However, sometimes even I have to have breakfast-on-the-go. For example, earlier this week I had to be on one of those TV news morning shows where you stand in a fake kitchen and chat about things. It’s kind of a long story. I had to get up at 5 AM to get there on time after a night of losing a frightening amount of sleep to the screams of a grumpy 7-month old. I didn’t have time for a cup of coffee. I couldn’t remember the name of the Netherlands (oops). But, I was not hungry because I had eaten a few of these little fruit and nut bites on my way out the door, and while small, these things have a weird stick-to-your-ribness about them.

They’re simple to make and simple to vary. The basic formula is two parts dried fruit to one part toasted nuts plus a spoonful of honey and any spices that sound good at the moment. I am partial to the combination of sweet-tart dried cherries and apricots plus buttery pistachios and a little zing from lemon zest. Then you just pulse everything together in a food processor and roll them into balls, which allows you to feel like you’re munching on truffles, when it’s actually fruit. They’re a lot like Larabars but in ball form, ie. Laraballs. Which is not a product name that is ever going to make it. That’s why I call them bites. Whatever they’re called, they can help you get up and go if you’re required to be on the go. 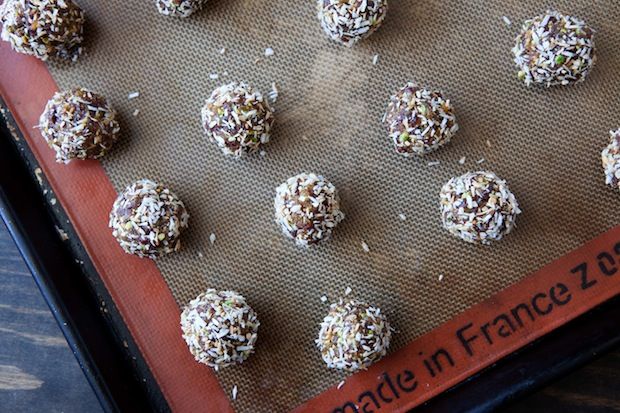