Sorrel and How to Use It

Today: Sorrel is an ancient herb, beloved by other countries, but less common in the States. We’re okay with being a little late to the party, though -- sorrel’s worth the wait. 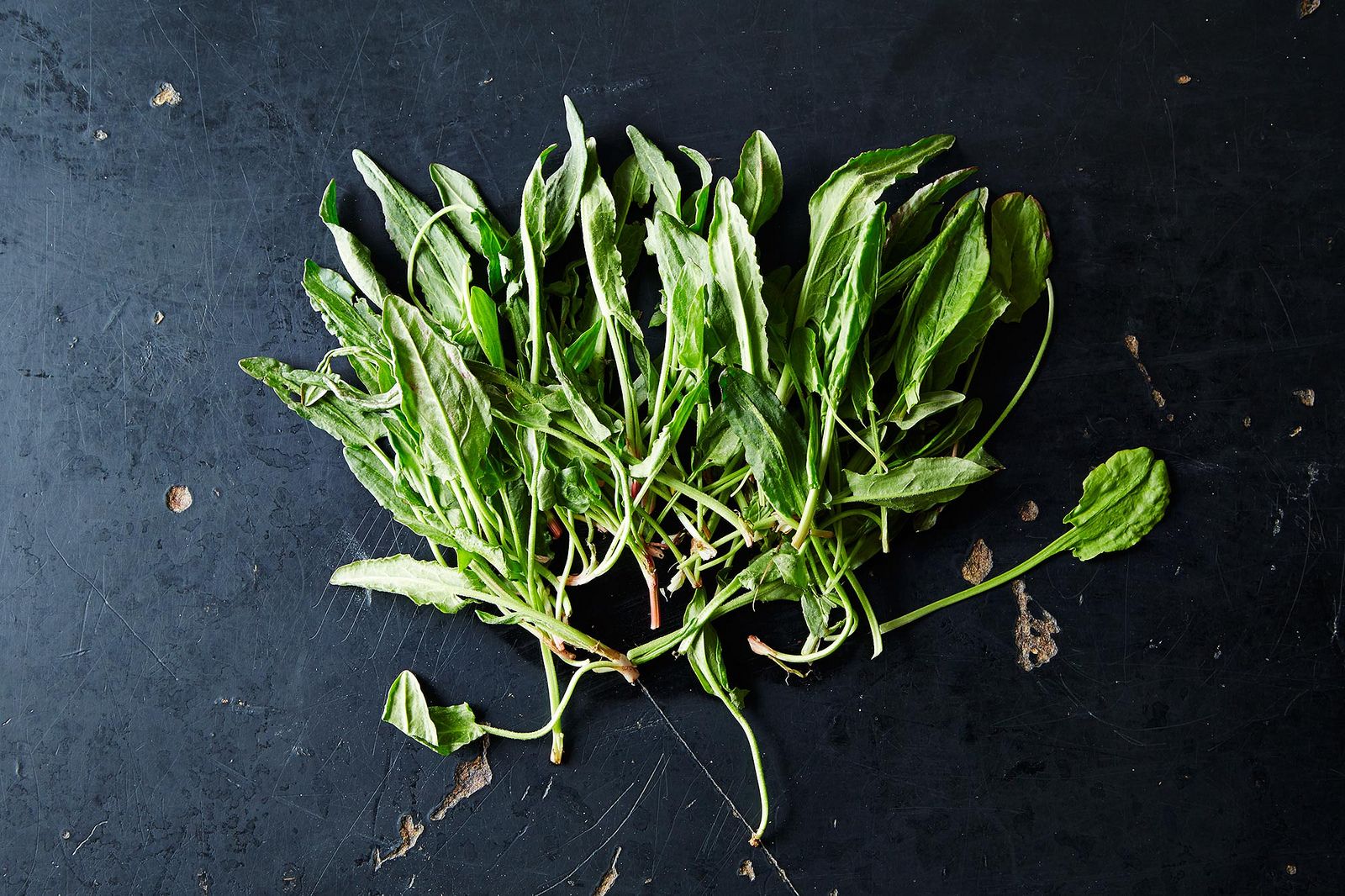 Sorrel has a refreshing sour tang -- in fact, it’s often referred to as “lemonade in a leaf.” That pleasant lip-puckering is thanks to oxalic acid, a naturally occurring substance that makes some foods taste tart, like sorrel’s family member, rhubarb. (It’s less noticeable in other foods like spinach, parsley, and bananas.) You might have heard that oxalic acid can be toxic; this is true, but only in very large doses, so just stick to reasonable levels of consumption. Oxalic acid isn’t all bad -- its presence is what allowed Romans, Greeks, and Egyptians use sorrel as both a meat tenderizer and a digestive aid.

More: Fiddlehead ferns are another spring favorite that aren't stranger to controversy.

Keep your eyes peeled for sorrel at a specialty grocery store or your farmers market; look for leaves that are similar in appearance to elongated spinach, almost arrow-shaped (2, below). You’ll most likely find common sorrel (also called garden sorrel), or French sorrel, the latter of which has less of a bite. Or pick up seeds or a starter plant and grow your own -- sorrel is a perennial, and you’ll appreciate it coming back year after year. 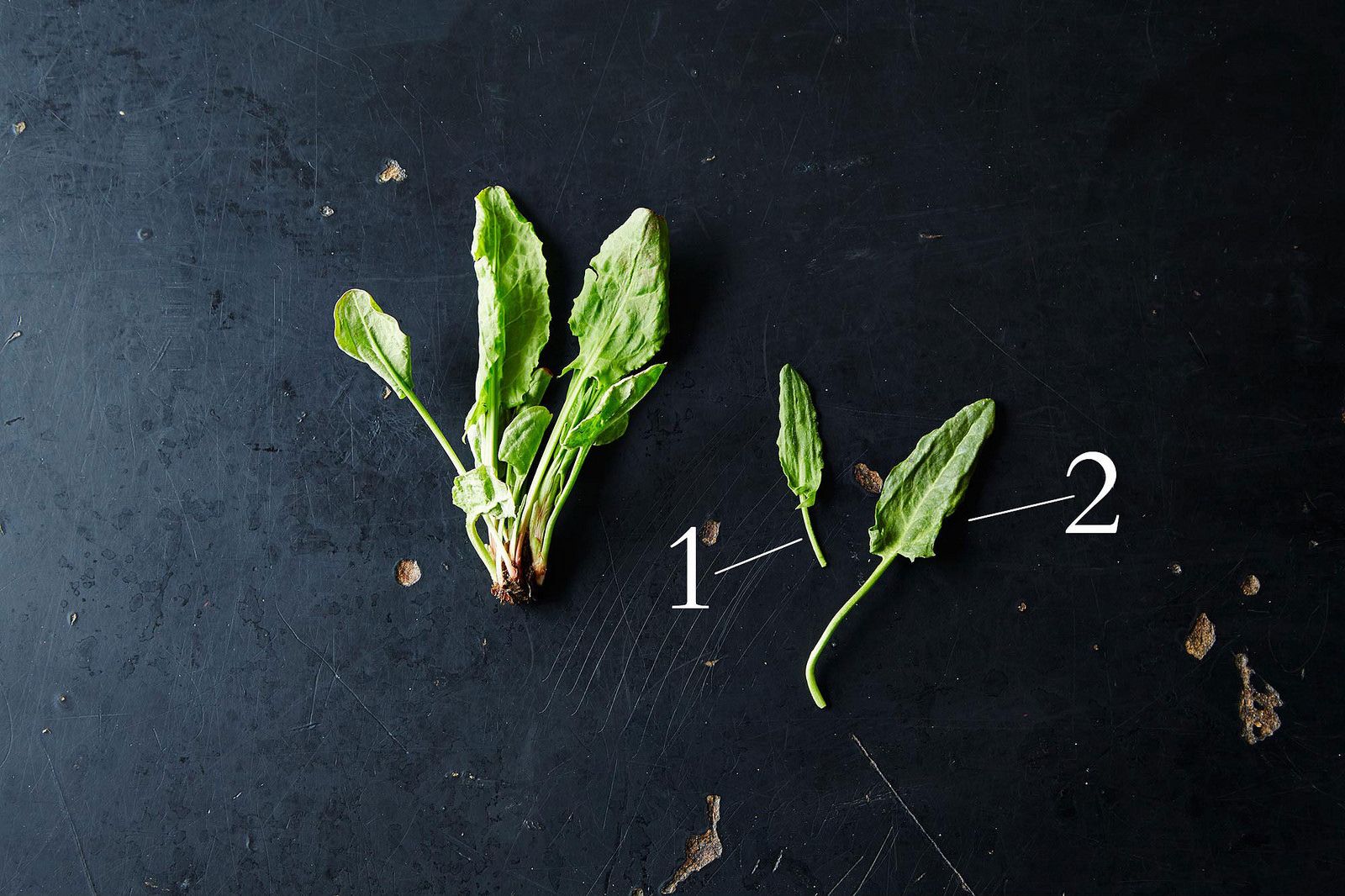 Prep Tips
When young, the stems of small leaves (1) are tender -- but later in the season the stems toughen up, so at that point it’s best to remove them. If you’ll be puréeing mature leaves for a sauce or soup, Deborah Madison recommends removing the stem from the entire length of the leaf -- just fold each leaf in half and pull up on the stem. According to Gordon Ramsay the leaves are delicate and bruise even easier than basil, so always use your sharpest knife when chopping them.

More: Brush up on the best ways to store leafy greens and fresh herbs.

How to Cook with It
Sorrel is happy to be treated as an herb or a leafy green, and it can be cooked or used raw -- a little can go a long way, so remember that it’s easier to add than it is to subtract. When cooked, it will turn a dreary shade of greenish brown (thanks to that oxalic acid), but not to worry -- the tart flavor won’t be lost.

Add small young leaves whole or chopped to a sandwich or salad, or chiffonade and scatter on top of egg dishes. Sorrel pairs well with both potatoes and fish -- try turning it into a sauce for salmon. It also likes to mingle with other spring flavors, like asparagus, peas, watercress, and nettles. It can also stand well on its own: creamed, in soup, or in pasta. And you won’t believe what it can do for our favorite: avocado toast.

Go crazy with sorrel now, but don't forget to save some for a taste of spring in colder winter months too. Deborah Madison suggests making and freezing a sorrel purée: “Drop stemmed leaves into a skillet with a little butter and cook until the leaves dissolve...which takes only a few minutes. Cool, then freeze flat in a ziplock bag.”

Tell us: How do you like to use sorrel?

China August 25, 2014
Ah, sorrel! If sorrel is left to grow in an herb bed pretty soon it would be nothing but a carpet of sorrel. We planted seeds for both kind, the red veined one known as wood sorrel, and the French one that came from my Grandparents home in Provence. Both have proven to be akin to dandelions when it comes to grow and go.
I was taught to "melt" sorrel. A bit of butter melting, a handful of sorrel just without the rib, never to chop it and let it become a puddle of metallic green goodness.
Mixed with a couple of minced garlic cloves, a touch of vermouth and stir until everything is incorporated. As is it can be frozen with no noticeable detriment to the sorrel. When needed it can be added to sorrel and potatoes soup, a wonderful Russian recipe I believe easy to find on the web. For a great sauce, salt, pepper and a soupcon of heavy cream, a dash of sugar and enjoy.

ButterSugarFlowers June 28, 2014
I just wanted to thank you for this informative and inspirational article! After reading your descriptions of sorrel, I created a new dessert with it: little sorrel-speckled lemon chiffon cakes with fresh cherry and sorrel topping! Sorrel is at home in the dessert department! Here is the recipe: http://buttersugarflowers.com/2014/06/16/cherry-sorrel-shortcake/
Author Comment

Stephanie May 26, 2014
I planted a sorrel plant a few years ago, and my 9-year-old adores the leaves straight from the garden. We're up to 3 plants now, as they come back but don't spread. This year we got #3 and potted it in the hopes that we can bring it in and keep it going come winter.

IlovePhilly May 16, 2014
I grow it, but I haven't used it a ton. I mostly throw the leaves into green smoothies in the morning. Thanks for this primer! I'm looking forward to trying it where it will shine!

AdeleK May 5, 2014
I hate to be repetitive but of course, sorrel soup, used in salads along with mache and other spring greens, but my favorite is salmon with sorrel sauce and a chicken in sorrel sauce. I have also added it in vegetable soups and to make a pasta sauce.

NVChef May 4, 2014
I first had sorrel many years ago when I visited my friend in Mougin, France. They grew it in their garden and I was served the best salmon in sorrel sauce. Sorrel, a little wine, minced shallot, cream,. Just lovely. I grow it in a pot and toss it in salad. It makes a delightful pesto too. Lot's of delicious dishes you can make with sorrel.

Lauren B. May 4, 2014
I love the mellifluous sound of the name sorrel so much that I named my middle daughter's middle name after the herb -- but took the poetic license to add to "l's. Tiffany Sorrell --- this post is for you!
Author Comment

Pegeen May 3, 2014
Someone taught me that using a scissors to snip basil causes less bruising so maybe it would work for sorrel too.
Author Comment

Gretchen @. May 3, 2014
Combine a big handful or sorrel with other fresh, spring herbs like chives, thyme, tarragon,sage, etc., a little (or a lot if you like) garlic and a cup of thawed, frozen peas in a mini-processor. Add some fruity olive oil,a little at a time and blend until smooth; salt and pepper to taste and you have a delicious sauce to stir into risotto. Or over hot pasta, chicken, or firm whitefish. You get the idea; improvise a little! I stirred this green mixture into risotto about a month ago and it was fabulous. The essence of spring! You could use very tender raw asparagus instead of peas. Or use fresh fava beans when they come in.

Liz B. May 3, 2014
Thanks so much for the article! I'm on my way to the farmer's market right now in Templeton, CA and will keep a lookout for sorrel. Learning to cook with the seasons is so important; I've been loving all the seasonal coverage from Food52 lately!