Rhubarb, with its red-green stalks and tart taste, is one of spring's first harbingers. Whether you like it in scones, shortbread, a fizzy drink, or compote, here's everything you need to know about buying, storing, and cooking with rhubarb.

Are there any rhubarb facts we've missed? Have you ever grown it in your garden? Let us know! 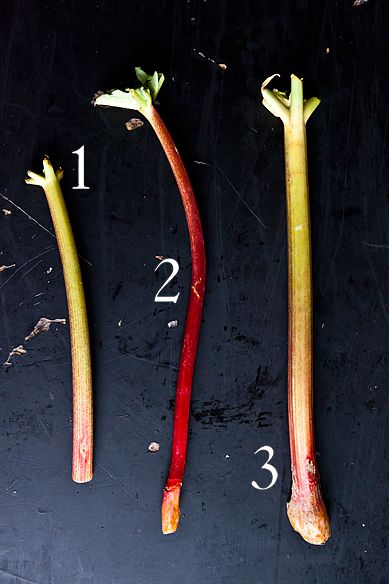 1. The Stalks: At the farmer's market, look for firm, unblemished stems of rhubarb with no nicks or cuts along the stem.

2. 50 Shades of Rhubarb: Depending on the variety, rhubarb can vary from deep red to pale green -- or with streaks of both running up and down the stem. According to the USDA, red rhubarb stalks are "sweeter and richer" -- they'll also lend a prettier color to your baked goods (like the blushingly pink curd in this shortbread).

3. Root of the Matter: Look for rhubarb with the root still attached. Not only will it last longer than trimmed rhubarb, it also indicates that the stalk was truly mature when it was harvested -- ready-to-harvest rhubarb can be pulled from the plant with a gentle tug. Store your rhubarb loosely wrapped in the coldest part of your refrigerator. It will last about a week. 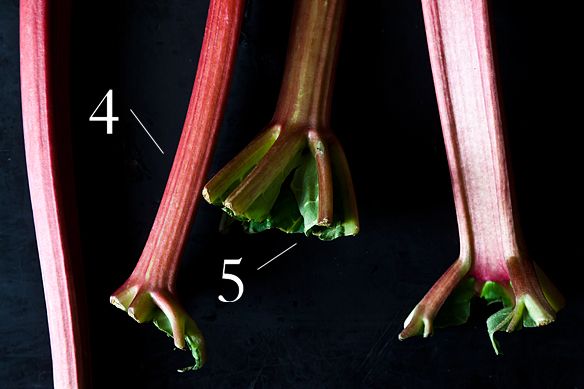 4. String Theory: According to the University of Illinois Extension, older rhubarb can be stringy. Remove the tough outer strings by gently peeling them away with a paring knife starting at the root.

5. You Know That You're Toxic: You will rarely see rhubarb stalks with leaves at the market: they're poisonous! The oxalates in the leaves are harmful whether raw or cooked -- trim them away before cooking the stalks. 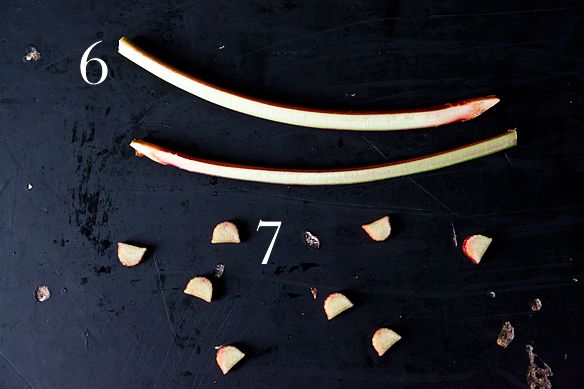 6. X-Ray Vision: Let's look inside: the inner fibers of the rhubarb plant should be pale green and firm -- rhubarb that is too old, or that has frozen in the field, will be mushy.

7. Half Moons: The best way to cut rhubarb for cooking is into coins -- the red outer edge will give color to the tart insides as they break down. The University of Maine Extension reminds us that you should cook rhubarb in non-reactive cookware (ie, not alumninum) due to the acids in the stalk.

Looking for some rhubarb recipes to get started? Here are three of our favorites:

Jeffro May 14, 2014
Wars were fought over rhubarb, but not for the stems. The roots were our first laxative. I read about a guy trying to commit suicide by rhubarb. It didn't work. They'll make you wish you were dead, but they probably won't kill you.

Cherie777gll January 26, 2014
Rhubarb and strawberries make great jams and jellies. The rumor here in Wisconsin is that you don't cut rhubarb after June 1st. It likes a large amount of horse manure in the fall.

BoulderGalinTokyo June 18, 2012
I did know the leaves are poisonous, but every time I throw them on the compost I wonder if that is safe. Maybe they belong in the trash?

mcs3000 June 18, 2012
Great, new series. Did not know the leaves were poisonous. I've been making a ton of smoothies and throw basically everything into them. Will skip the leaves.

Hilarybee June 15, 2012
jbban and mrslarkin, I do this too. It freezes wonderfully, but I don't defrost it before I use it. Just coat in a little flour or cornstarch and then bake it right in. I've found defrosting makes it really flavorless and stringy.

smslaw June 15, 2012
Rhubarb is easy to grow but it is very prolific. We planted 10 when 1 or 2 would have been sufficient, but every rhubarb lover in the neighborhood gets some. It looks nice and grows in a dense clump that eventually crowds out weeds.

jbban June 14, 2012
Fact: you can clean and chop rhubarb, then freeze it for later use.

mrslarkin June 15, 2012
I agree, and use this method all the time! I freeze in a single layer until solid, then transfer to a zip-top freezer bag, and use what I need.

Christina @. June 14, 2012
I LOVE, LOVE, LOVE rhubarb...I do grow it here in SoCal, but it's nothing like back home in Scotland :( Here's one of my favorite ways to have it: http://christinascucina.blogspot.com/2012/05/crunchy-rhubarb-yogurt.html