How to Make Mud Pie

Today: You don't have to drive to your favorite diner for a big piece of mud pie. Carey Nershi from Reclaiming Provincial is showing you how to make your own -- and she's adding a few things to liven up this old classic. Mess optional. 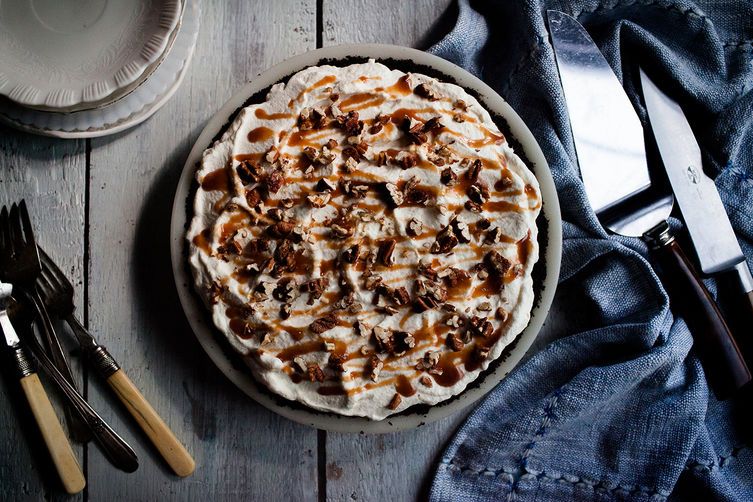 In my eyes, mud pie is a dessert open to interpretation. Over the years, I’ve tasted a number of different treats bearing the name, and no two have been alike. So when I set out to write this article, I scoured the Internet to see if I could turn up a widely-agreed-upon, legitimate, and original mud pie recipe. I couldn’t. There were just lots and lots of different mud pies.

There does, however, seem to be a common framework: a cookie or graham cracker crust, a chilled filling (usually pudding, though I’ve also seen ice cream), and a whipped cream topping. I happened upon some variations that used pie crust or called for a chocolate cake layer (which is baked in the crust before the other components are added), but given that I associate chilled pies with summer, and summer with not wanting to turn the oven on EVER, that didn’t exactly intrigue me. Maybe it’s something to reconsider now that the weather is getting colder. 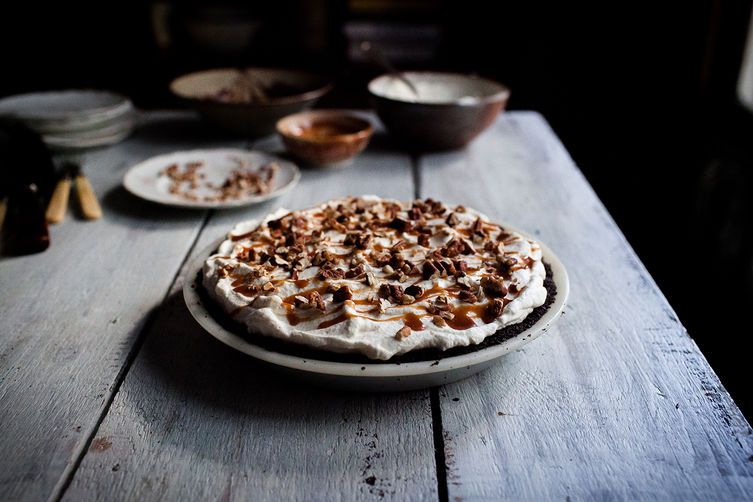 I was intrigued by a handful of recipes that called for chocolate and butterscotch pudding, and I couldn’t get the combination of chocolate and creamy caramel out of my head. I won’t lie, the resulting recipe came about primarily because I wanted a reason to make a batch of cajeta. (For those that aren’t familiar with cajeta, it’s basically dulce de leche made from goat milk. The goat milk gives it a wonderfully tangy flavor, and I have been obsessed with it since I made my first batch.) The chocolate pudding in this recipe also uses goat milk, but the resulting flavor isn’t that different from a batch made with cow milk, in my opinion.

More: Make extra cajeta and then mix it into banana ice cream. (That's a command.)

The pudding and cajeta are dreamy together, and the bits of salted pecans work perfectly to add some extra crunch and break up the sweetness. The only problem with this pie is having to wait for it to set in the fridge overnight. Personally, I see nothing wrong with waiting until it’s barely chilled, then digging in. It’s a mud pie: It has the right to be messy.

For the chocolate pudding:

To make the pie: 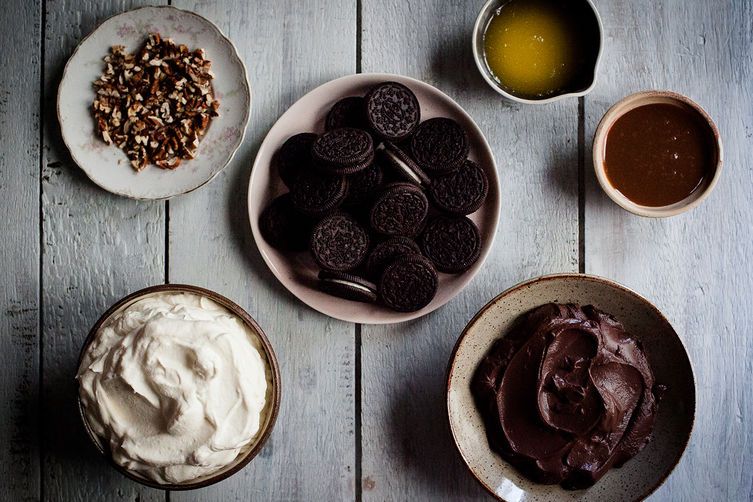 Start by making the pudding. Combine the cocoa powder, cornstarch, and salt in a bowl. Whisk in the heavy cream until fully incorporated and smooth, then whisk in the egg yolks. 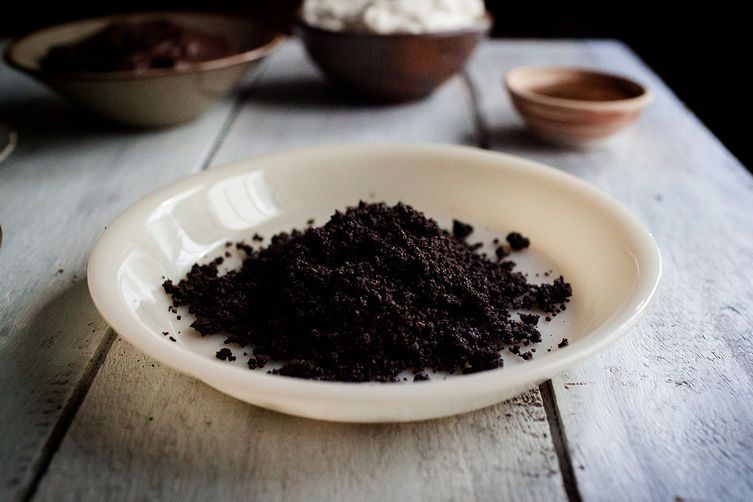 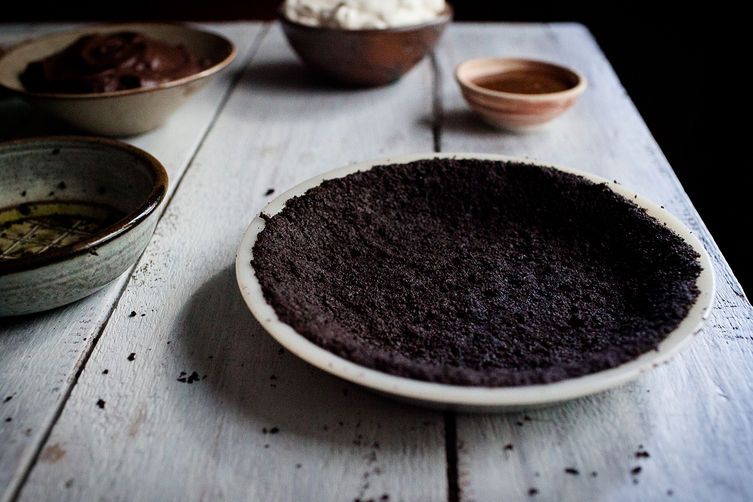 Remove the vanilla bean pod. Temper the egg yolk mixture with about half of the warmed milk, then add the egg mixture back into the saucepan with the rest of the milk. Stir frequently over medium heat until it reaches a boil. Boil for 2 minutes while whisking vigorously, then remove the pot from the heat. Immediately add in the chocolate and whisk until it’s fully incorporated.

If you won’t be making the pie right away, transfer the pudding to a container, cover with plastic wrap, and refrigerate for up to 3 days. 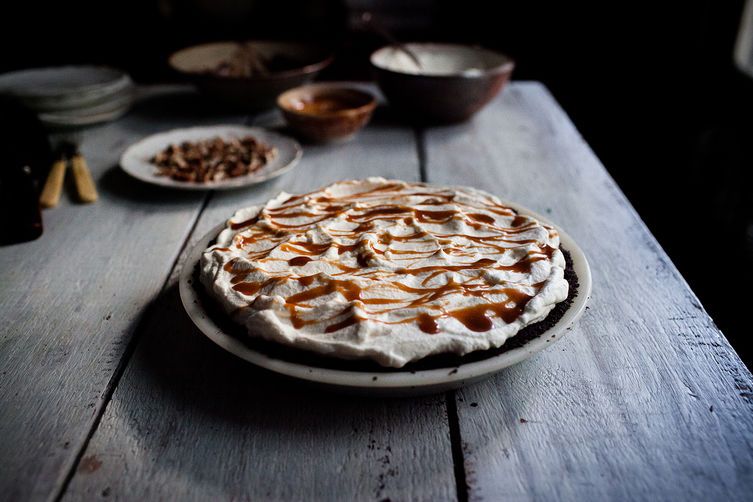 Now get started on the cajeta. Combine all of the ingredients in a heavy-bottomed saucepan. Heat over medium, stirring until the sugar dissolves. Clip a candy thermometer to the side of the pan and continue to heat until the mixture reaches a boil. Reduce the heat to low and simmer for 1 to 1 1/2 hours, or until the mixture reaches 225° F. Remove the cajeta from the heat and let it cool. Store it in the fridge for up to 1 month. 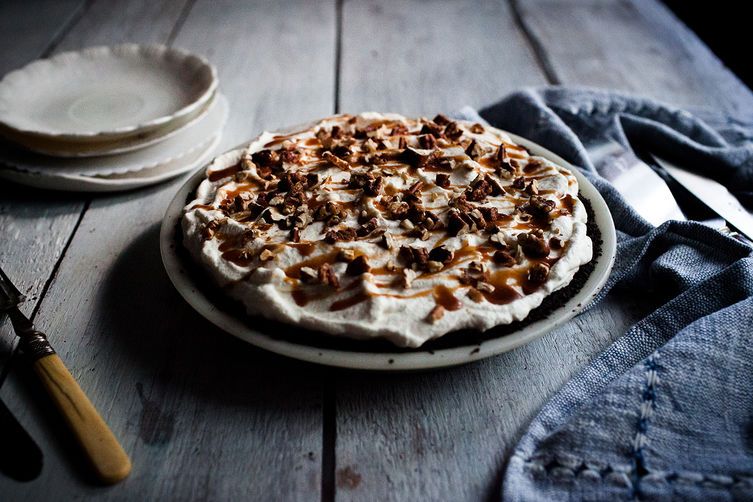 When you're ready to assemble your pie (or you just can't wait any longer!), pulse the chocolate cookies and the melted butter in a food processor until the mixture is crumbly and holds its shape when pressed between your fingers. Press the crumbs into a 9-inch pie pan until they're evenly distributed and tightly packed.

Spread the cajeta over the bottom of the pie shell. Add the pudding and spread with a spoon to evenly fill the pie. Cover the pie with plastic wrap and refrigerate for at least 3 hours or (ideally) overnight to let the pudding to set completely. 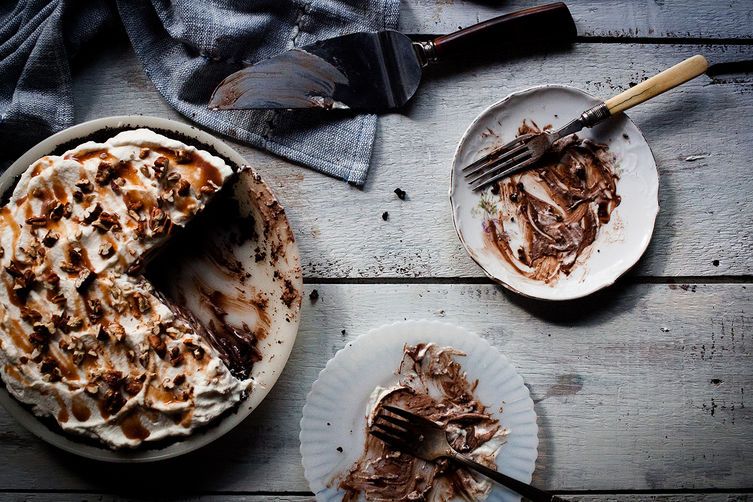 When you’re ready to serve the pie, beat the heavy cream until soft peaks form. Add the sugar and continue to beat until stiff peaks just barely form. Spread the whipped cream over top of the pie.

Drizzle additional cajeta over top of whipped cream. (Warm the cajeta in a saucepan first if it seems a little thick.) Top with salted pecans.

Willow |. September 12, 2014
Absolutely gorgeous! I've never tried cajeta, but now I absolutely must. I adore caramel sauces of all kinds, and making it with goats milk is pure genius. I'm pretty sure I could take down this pie all on my own, frankly. :)