Shallots and Our 5 Favorite Ways to Use Them

Today: Join us as proud members of the Shallot-of-the-Month Club. 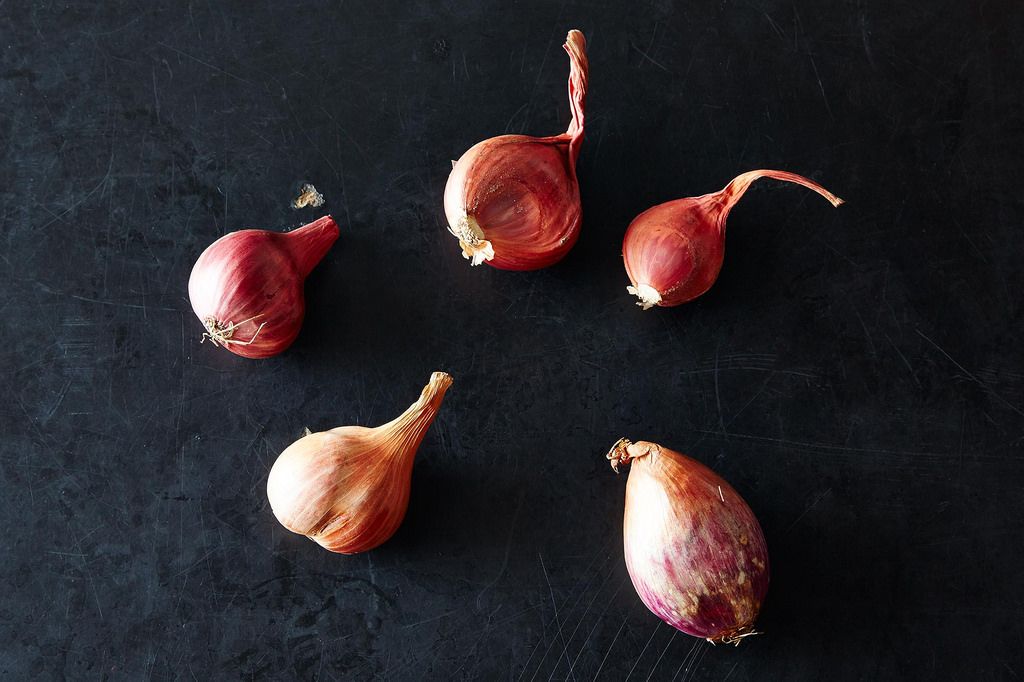 Fact: Shallots are alliums (no big surprise, since they look like tiny onions).

Up for debate: Almost everything else there is to know about shallots.

We exaggerate of course, but shallots truly are surprisingly contentious -- enough to start conflicts in the agriculture world known as the "shallot wars." Some argue that French grey shallots (also known as Griselle shallots) are the only "true" shallots, as they are only propagated by bulb (and not by seed, as other shallots can be), and allegedly have a superior, more complex flavor. As father of molecular gastronomy Hervé This observes: "As is often the case in these political economic wars, science was called upon to produce the facts."

After genetic testing and analysis from "electronic tongues," distinct differences were indeed found between grey shallots, pink shallots, and hybrid varieties of onions "grown to be passed off as shallots." Grey shallots are, in fact, classified as a different species (A. oschaninii) than the other types, which are classified as A. cepa (although they used to be classified as a separate species, A. ascalonicum).

More: You also have Hervé This to thank for discovering the simplest way to make chocolate mousse at home. 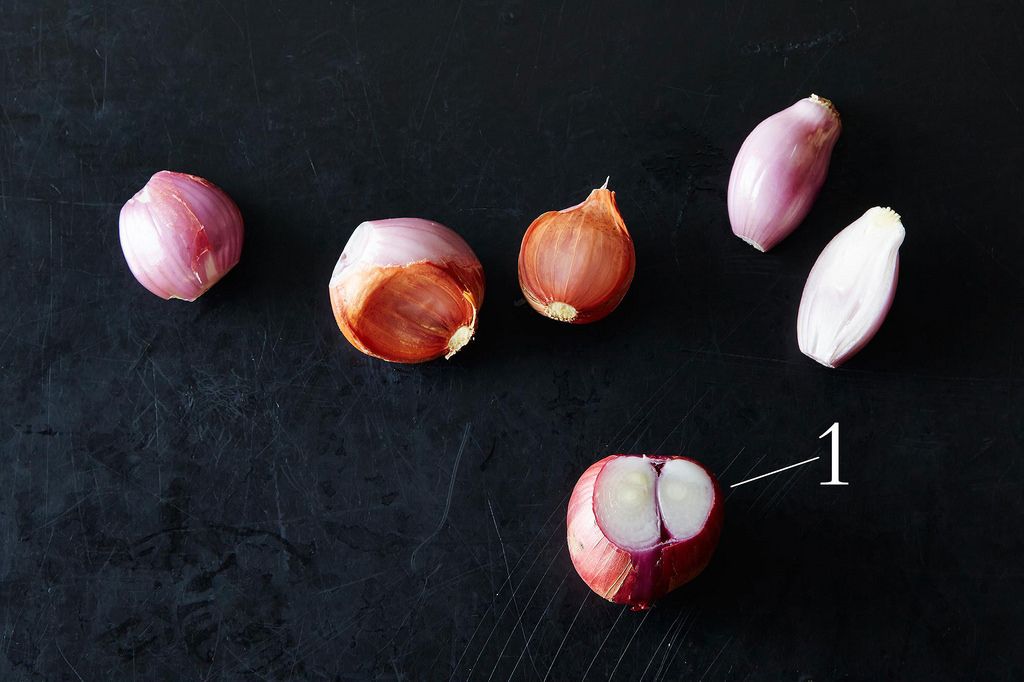 While onions have a single bulb, shallots are similar to garlic: If you plant a clove of garlic, you’ll get a head of garlic, and if you plant a single shallot, you’ll grow a clump of shallots. They form in clusters like garlic, but instead of cozying up and staying tightly packed together like a head of garlic, shallots rebelliously splay out -- although it is it still common to get multiple cloves within what we think of as a single shallot (1).

Of course there are other varities beyond pink and grey shallots; there are Dutch shallots and Jersey shallots, and Cuisse de Poulet, which are a French variety charmingly named for their resemblance to a perfectly golden chicken thigh. The Cuisse de Poulet are actually onions (they are grown from seed and produce a single bulb), but they look like shallots; now, they are referred to as banana shallots or echalion so as not to be confused with "true" shallots. There are other types of shallots, too, but what you'll generally see in the store are the pink Jersey-type variety.

Knowing how they grow will allow you to check to see if they have a small flat spot (2, below) where they were separated from their neighbor, identifying what you have as a shallot and not a small onion that's being passed off as one. 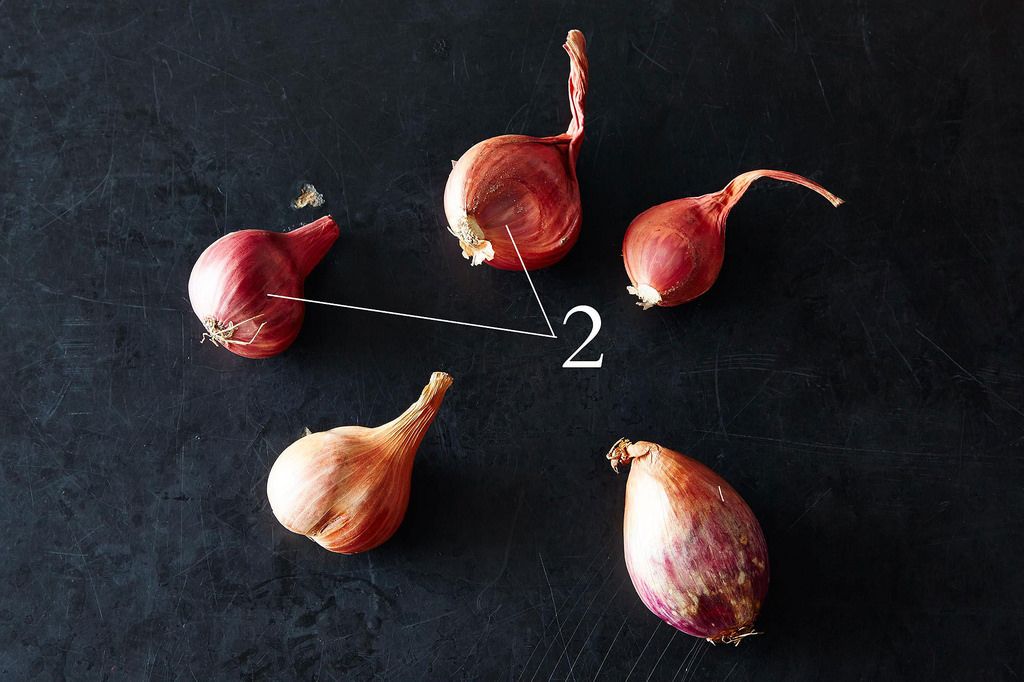 When buying and storing shallots, follow the same rules you would with onions: Look for dry, papery skins and firm bulbs, and store them in a cool, well-ventilated spot. We mainly buy the bulbs of course, but if you’re growing your own, know that the leaves and flowers are also edible.

Recipes will often simply call for "one shallot" -- minced, sliced, or diced -- much to the consternation of some. (Not familiar with this personal vexation? As shallots can vary in size, sticklers for precision would prefer an exact measurement.) If this is you, consider cooking with shallots to be a chance to let your hair down in the kitchen. We assume 1 medium shallot finely chopped will yield about 2 tablespoons, so use that as a starting point, and then let your tastebuds guide you.

More: Commit these common cooking conversions to heart, and you'll be (a little more) relaxed in the kitchen.

Shallots are a classic in a vinaigrette, perfect on a pizza, and can even be treated as a vegetable -- roasted and standing in as a side dish in their own right. They're delicious caramelized, and they also make a tasty crispy topping, whether lightly crisped or deep-fried. If you go this route, take care not to overcook your shallots; Jane Grigson warns that it will make them bitter.

Tell us: How do you like to use shallots?

ghainskom September 15, 2014
This is what I will turn my shallots in in the next days: http://www.thecrepesofwrath.com/2011/09/28/french-shallot-soup/

Mary C. September 14, 2014
This shallot-rosemary puff tart turned out to be excellent! Sweet, caramelized shallots on top of a flaky puff pastry and drizzled with honey-balsamic reduction tantalizes all of your taste buds. It did mine, anyway.

Mary C. September 15, 2014
Thank you! It's a really easy recipe if you don't do the pastry from scratch.

WHB September 14, 2014
Heidi Swanson's shallot oil for almost everything! The cilantro salad is delicious, too! http://www.101cookbooks.com/archives/cilantro-salad-recipe.html

Lindsay-Jean H. September 14, 2014
In a vinaigrette, as a pizza topping, roasted as a side dish, caramelized, and as a crispy topping -- check out the last paragraph for links to recipes!

Pegeen September 14, 2014
Does anyone know if French grey "griselle" shallots are grown in the U.S.?

Lindsay-Jean H. September 14, 2014
Yes they are, and you can also order sets to grow your own!

Pegeen September 13, 2014
Thank you for this article! First, I think shallots, olive oil and vinegar are what I would take to a desert island (beside a team of Navy SEALs). Second, it's exactly the kind of ammunition I need to one-up my brothers whenever we cook weekend dinners together.

marsiamarsia September 13, 2014
I often come across recipes that call for shallots and garlic both. Doesn't this defeat the purpose of using shallots? Won't the garlic overpower the subtler taste of a shallot?

Pegeen September 13, 2014
marsiamarsia, I think it depends on how each one is cooked in the dish. For instance, if you were to use whole garlic cloves to flavor olive oil and/or butter, then remove them, then saute the shallots in the oil, you should have the flavor of both. I think it really depends on the recipe.