How to Make Deep-Fried Apple Pies from Scratch

Today: Tieghan Gerard from Half Baked Harvest makes a miniature version of her favorite pie that's better than what you'd get from the Golden Arches' drive-through. 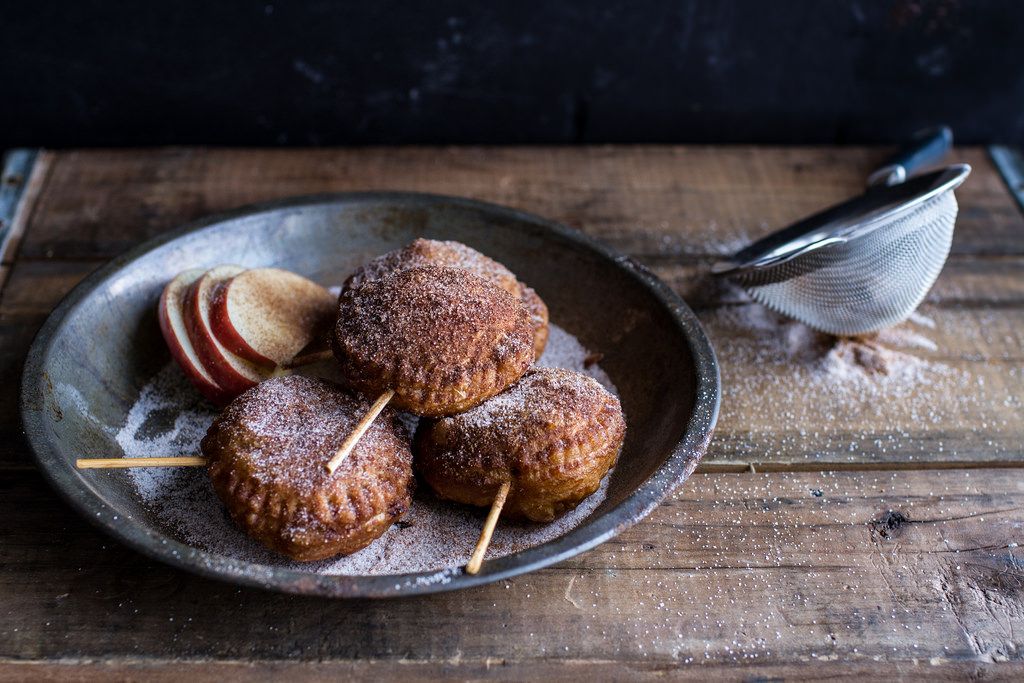 Fall is my favorite season. It’s cozy, colorful, crisp, and kind of delicious. Summer has its berries, winter has its blankets of snow, and spring its budding flowers, but fall will always be my most-loved time of year. And with fall comes my favorite autumn produce: gourds, pumpkins, and, especially, apples.

The first apple pie I ever made -- and ever tasted -- was for my grandfather’s birthday. I think I was only thirteen years old, but I was determined to make it myself. I made my own crust and I was surprised by how easy the whole process was, and by how delicious my pie turned out. Out of all the pies I've made since then, that one is still my favorite. For some reason, I've never been able to make any other pie taste quite as good; they've still been delicious, but just not as unforgettable as that first pie.

More: Try our recipe for a Truly Scrumptious Apple Pie. 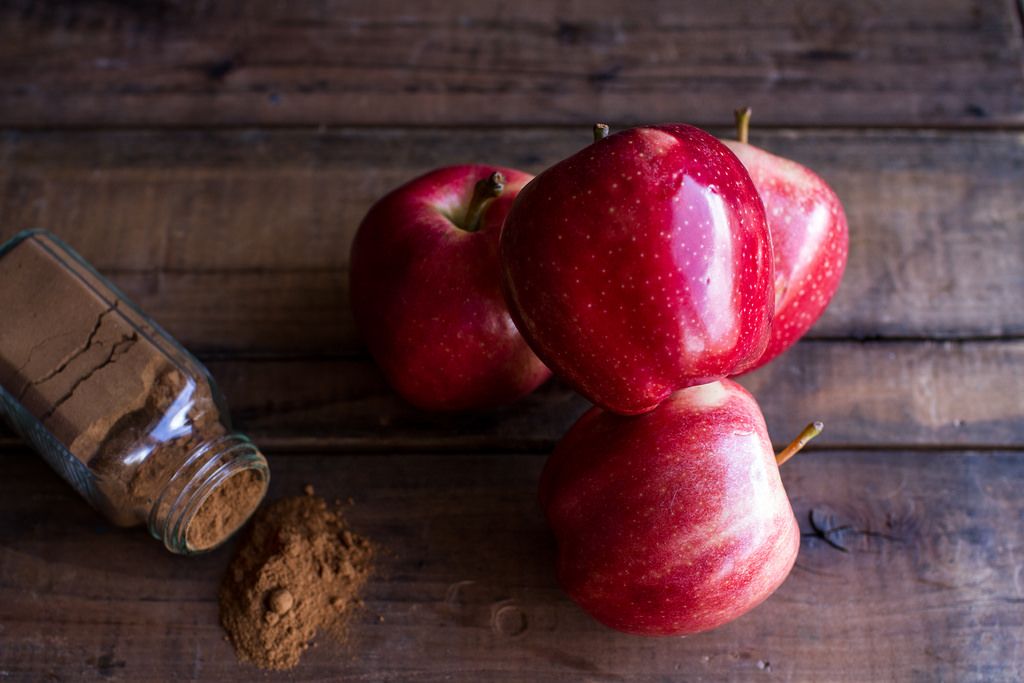 Whether you're making your first apple pie or your fiftieth, these cute little mini pies are perfect. They're different from regular apple pies not only because of their small size, but also because they're fried, which gives them an incomparably flaky crust. I used puff pasty for ease and Honeycrisp apples because they are my favorite. I coated the pies with cinnamon sugar for a sparkly, sweet finish. 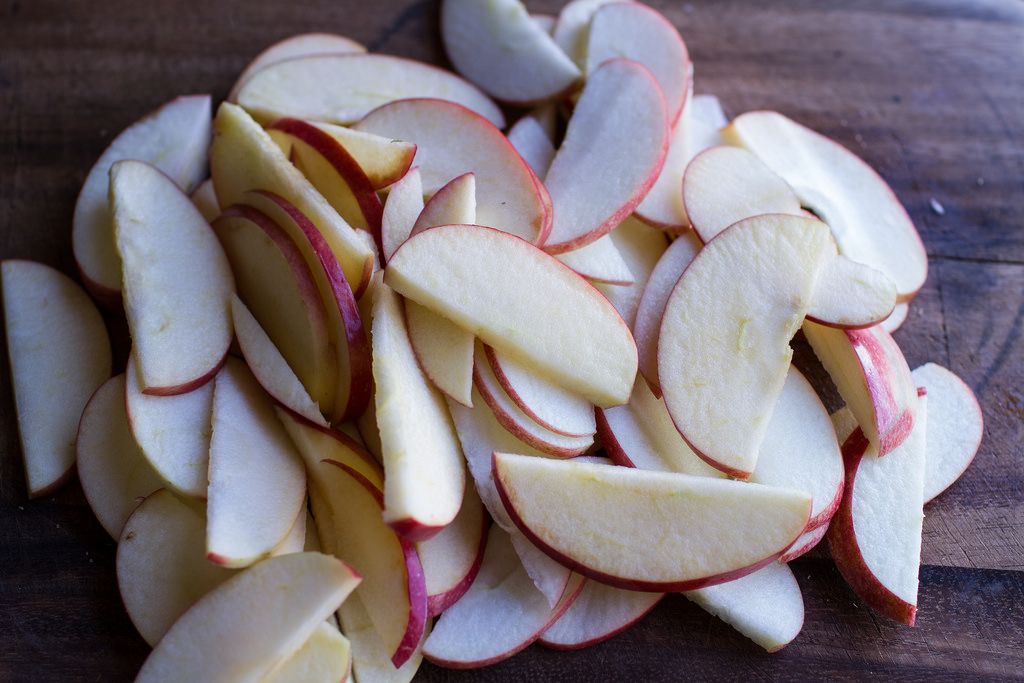 Chop the apples into thin slices. Heat a skillet over medium heat and add the butter. When it's melted, throw in the the apples, brown sugar, and cinnamon, and cook the apple slices, stirring occasionally, for about 10 minutes, or until the apples are caramelized.

During the last minute, add the bourbon, apple cider vinegar, and vanilla. Cook for another minute, then remove the skillet from the heat and set it aside. 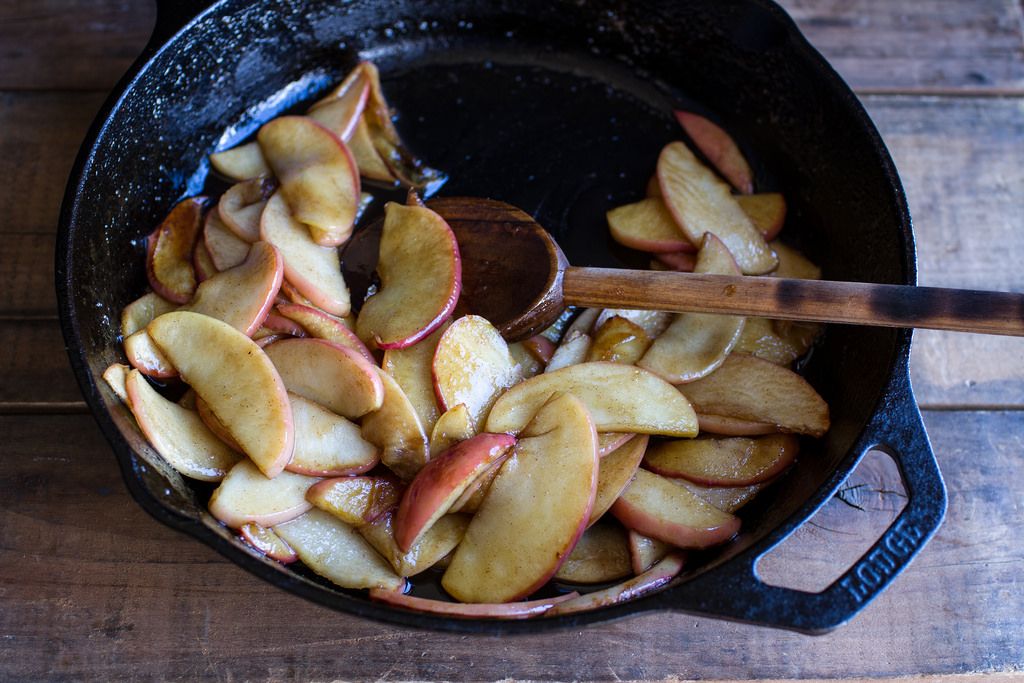 If needed, roll out your pastry dough so that it's 1/4-inch thick. Cut the dough into 1 1/2- to 2-inch circles. Divide the apple filling among half of the pastry rounds. 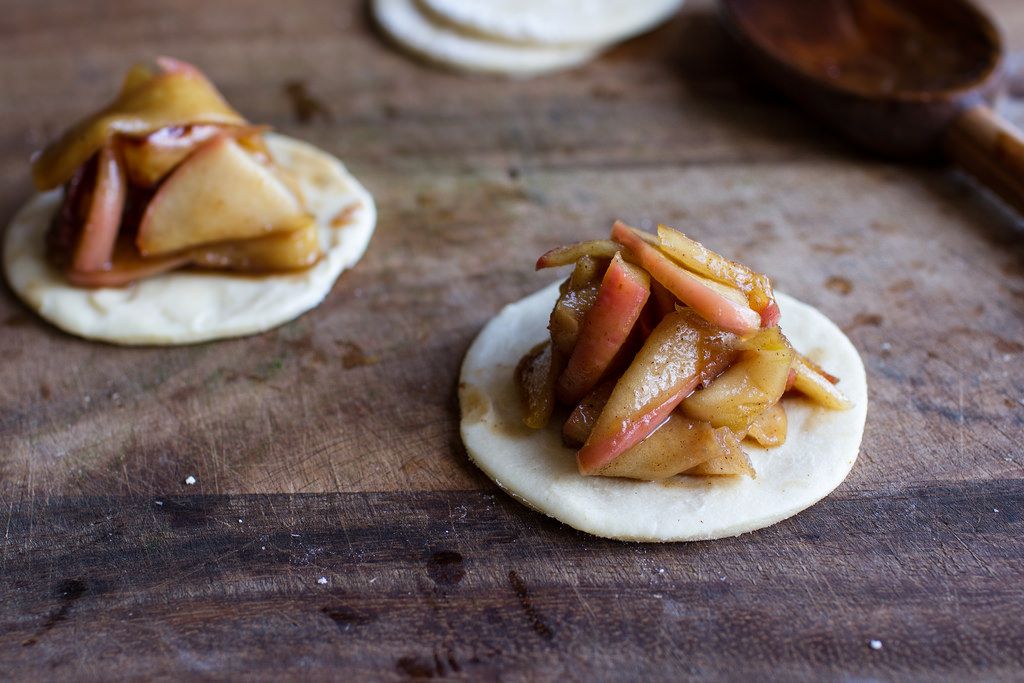 Place the remaining rounds over top of the apples (you may need to stretch the dough to help it fit over the apples). Crimp the edges of the pies with the tines of a fork. (I also placed wooden skewers in the pie pockets to make them easier to eat later, but that's optional.) 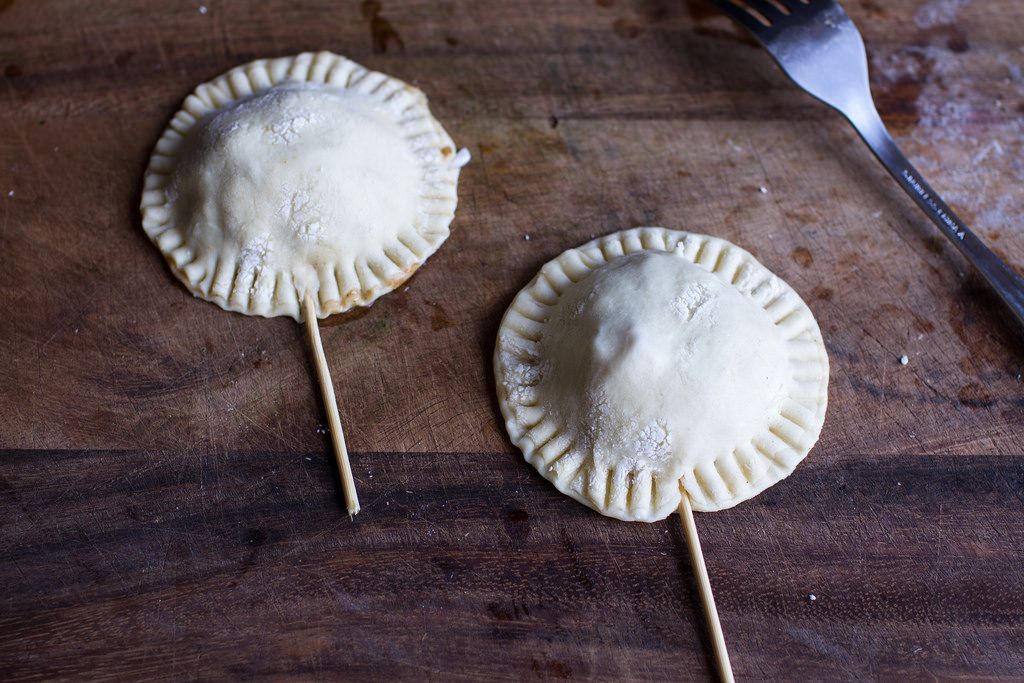 Heat a pot of oil to 350° F. Fry the pies in the hot oil for about 30 seconds on each side, until they are golden brown. Place them on a baking sheet lined with paper towels to drain. 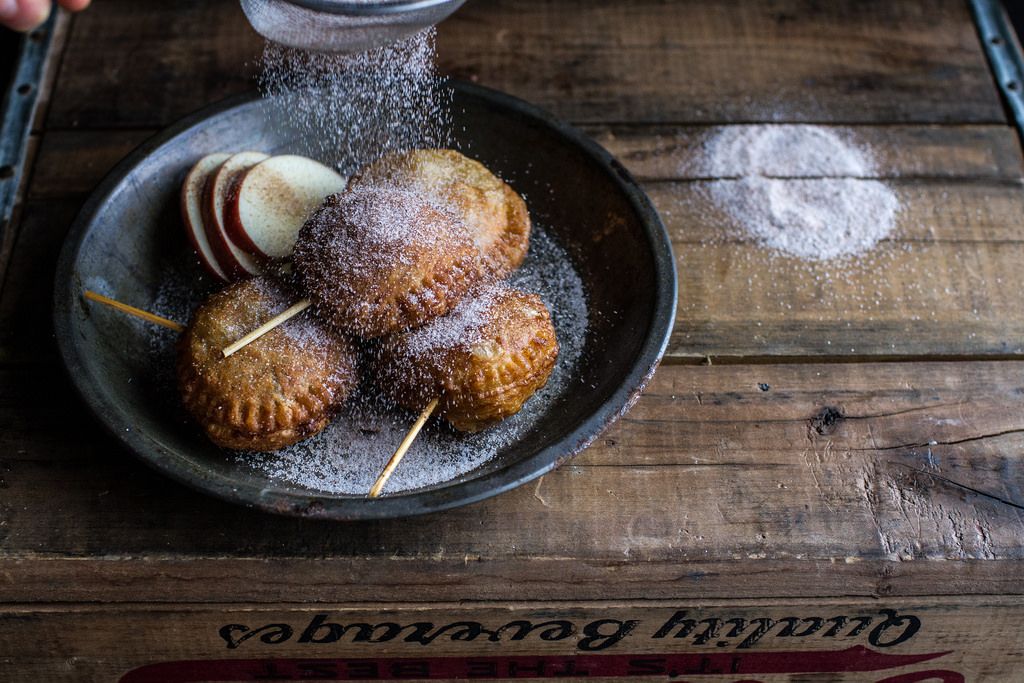 Mix together the cinnamon and the sugar and use them to dust each pie. 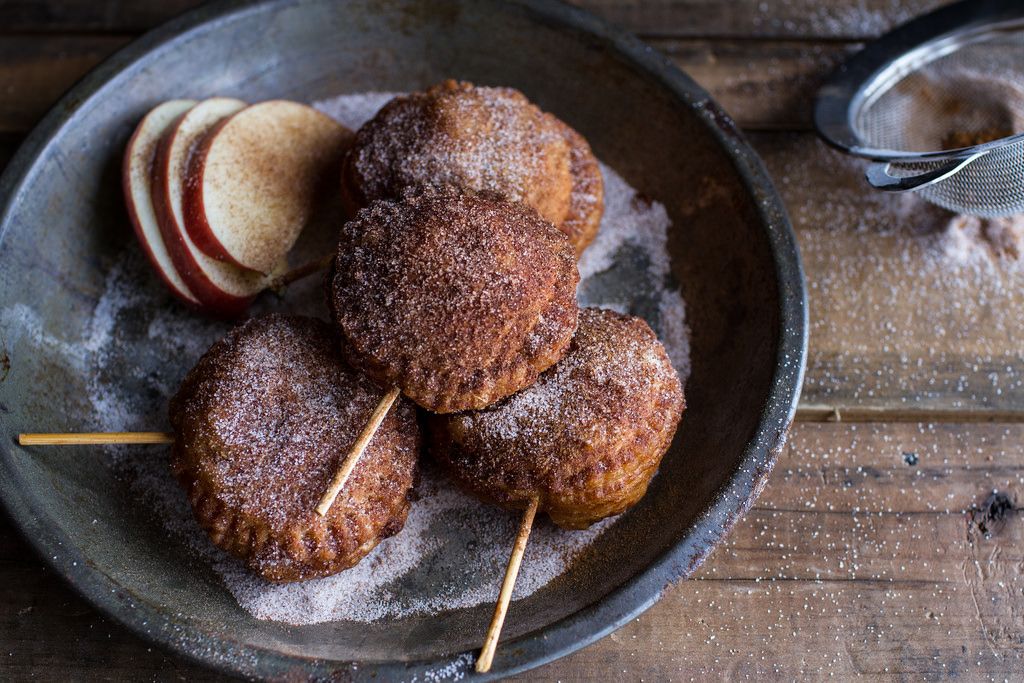 Olivia J. October 2, 2014
Could these be baked as well?
Author Comment

Printz September 18, 2014
Looks awesome & will definitely try this. Any reason why you kept the apple peels on?
Author Comment

Tieghan G. September 18, 2014
I just really like the apple peels, even when baking I almost always keep them on. Feel free to peel the apples of desired

CupcakesandKale September 17, 2014
Would these keep till the next day?
Author Comment

Tieghan G. September 17, 2014
Hi! The are really best eaten right away, but yes they keep about 2 days. Hope you love these!

CarlaCooks September 17, 2014
Oh my, this could not come at a better time. I have a bit of puffed pastry dying in the fridge, and some new apples from my CSA. Definitely making these tonight!

Lauren September 16, 2014
Going to have to try this after I go apple picking!

Lisa G. September 16, 2014
These look amazingly delicious. I love the thought of bourbon, vanilla, apples and cinnamon tucked into a flaky crust! I'm definitely going to try this.

Mindful A. September 16, 2014
This looks delicious! I will definitely be making this at our Thanksgiving, I bet everyone will love it :)