Today: Coconut Cake, Peach Cobbler, and a slew of other Southern desserts have gotten a welcome update in Ben Mims' new cookbook, Sweet & Southern. Read all about why we love it, then bake a cobbler, and enter to win a copy. 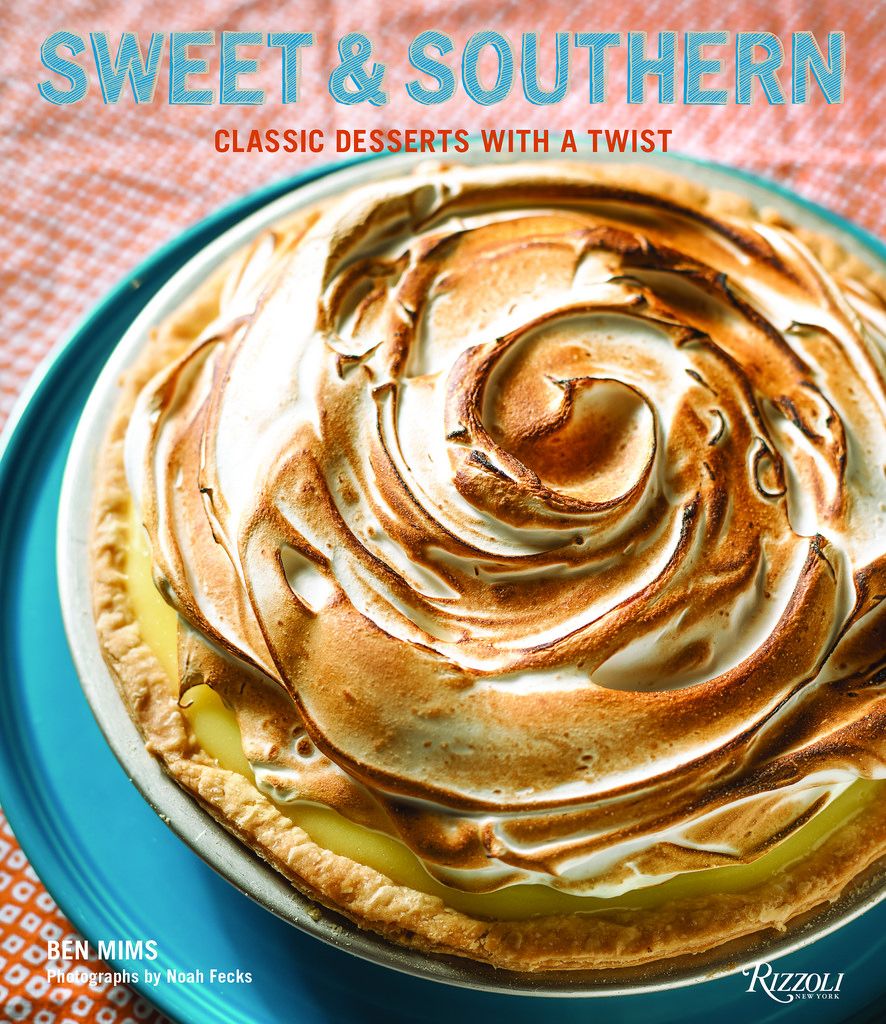 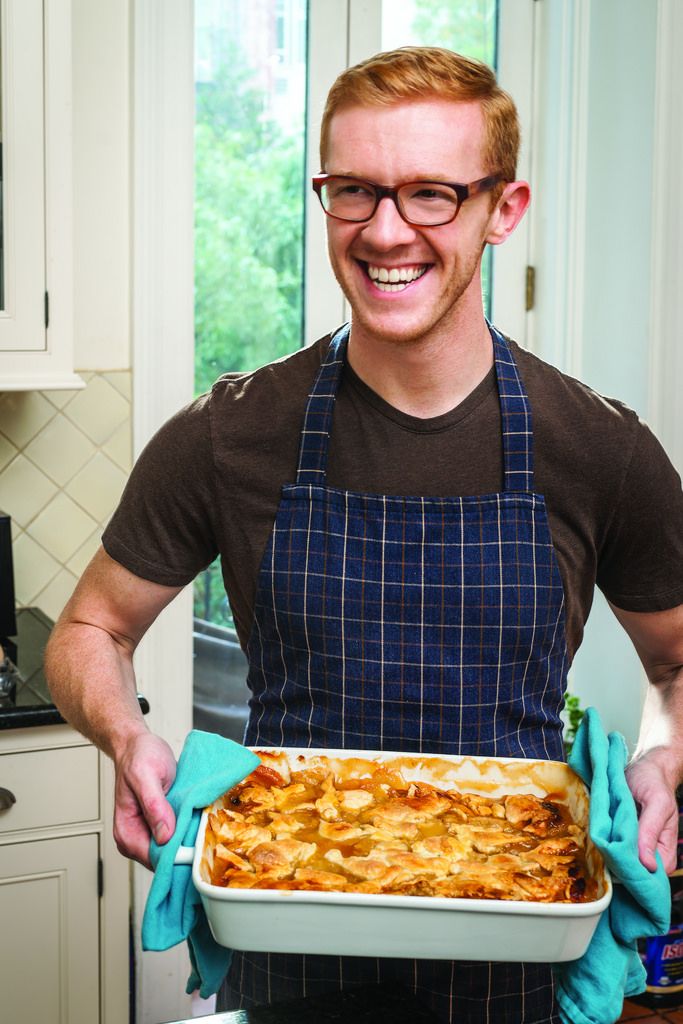 There is sugar in Southern DNA. And butter and an itch that can only be scratched by feeding others. As such, southern parties, weddings, afternoon teas, tailgates, dinners, lunches, breakfasts, picnics, church services -- you get the idea -- tend to center around a cake, a pie, a pile of biscuits, or something else that is round and lush with butter and dripping with icing, so hopeful that you will eat it.

In Sweet & Southern, Ben Mims has taken classic Southern desserts and added a bit of restraint and balance, scaling back sugar by a cup or two, or adding in generous pinches of salt to cut into richness. He has honored the sweet traditions that turned him into an avid baker, but adapted the cakes and pies of his childhood to modern tastes, with a recipe tester’s keen eye. These cakes and friends are not “lightened up” for any reason relating to “your middle” -- they’re just made better, and more reasonable; he calls it "cleaned up." Anyways, it’s much more fun to tear into a big wedge of cake than insist on just a wavering sliver for fear of a manic sugar high.

Having worked in test kitchens (first at Saveur and, now, at Food & Wine) and restaurant kitchens (Jean-Georges, right out of college, and more recently, Bar Agricole in San Francisco) alike, Ben has dutifully studied the anatomy of a recipe, knows the ins and outs of what will get a denser or lighter crumb, knows when to add an extra yolk and when a glaze is more welcome than a frosting. 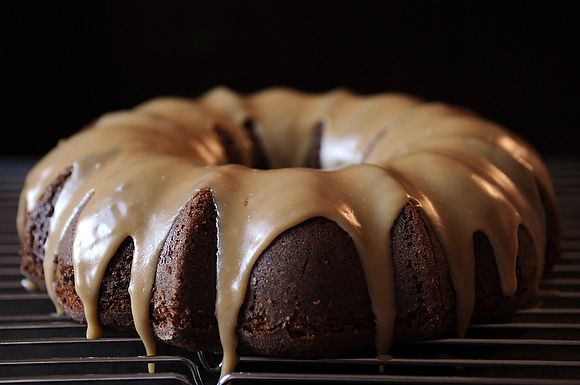 When testing recipes at Saveur -- where he was often tasked with finding the most classic versions of traditional cakes and other common desserts -- “I always thought, if I were to do it my way, this is what I’d add. There were always ways I’d want to change [the recipes].” Many of the desserts he tested were “way too sweet, or not as sophisticated as I wanted.” He refined his recipes, and filed them away. Two years ago, he wrote a beautiful article on Southern cakes in Saveur, and Rizzoli called about a book.

What defines Southern desserts? They are “recipes that use humble ingredients -- mostly just Americana that has become famous in the South,” explains Mims. Their Southern identity “has to do more with intense richness -- it hits you over the head. Living in the South, you’re used to it, but [when you leave and] come back, you’re like, oh my God.” He had just this reaction when returning home from New York, where cloying sweetness is always held at arm’s length, and from San Francisco, where fruit, not batter, runs the show. What really sets Southern desserts apart, though, is their intended purpose, and the attitude with which they’re served. That richness reflects the “generous spirit of Southerners.”

This spirit comes through in Mims’ words, in headnotes and introductions as well as smartly written recipes. When asked about his favorite cookbooks, he first mentions Nigella Lawson’s How to Be A Domestic Goddess: “If I could be anyone in the world, it would be Nigella. Or Jamie Oliver. I love their tone, and their food is very relaxing.”

He wanted the tone of his book to reflect Lawson’s “motherly” style, and retain the feeling of newness he first encountered when reading Domestic Goddess: “I wanted to make my book feel new and unexpected, but make people feel comfortable baking. It makes me want to stab my eyes out when people say they can’t bake.” 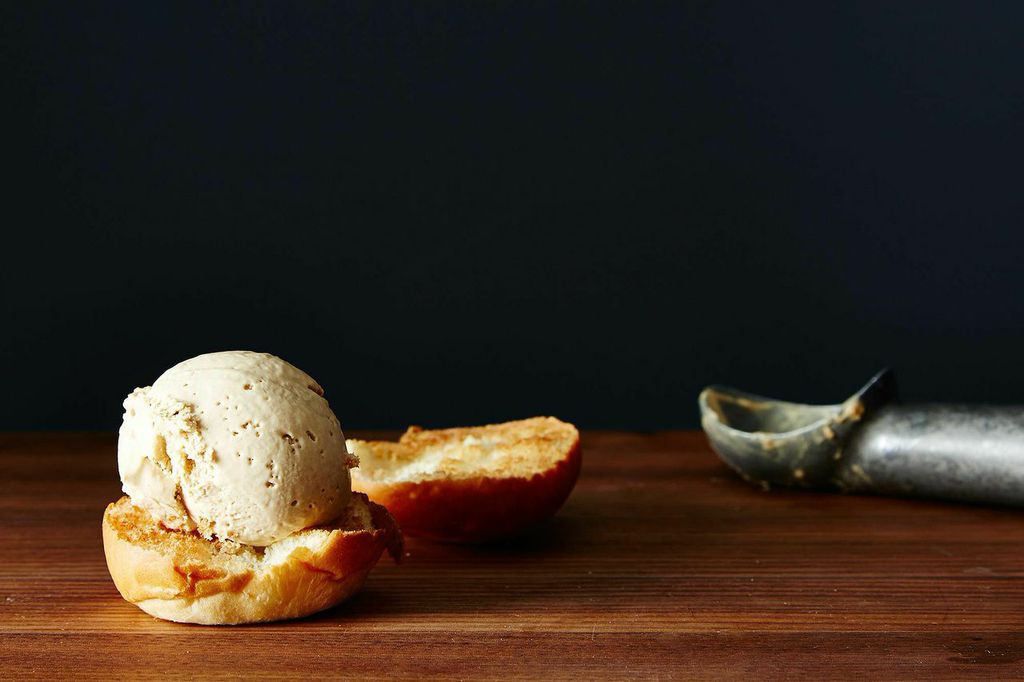 For novices and seasoned bakers alike, Mims has valuable advice in almost every recipe; his additions never feel superfluous, and his slight variations are the sort of smart revelations that come from years of home cooking, of memorizing recipes like others memorize poems, internalizing structure and rhythm. When so many cookbooks purport to “lighten up,” adapt, or riff on existing traditions just for the sake of something marginally new, these recipes feel necessary, like we’ve been waiting years for them, and our Southern aunties are a bit slow on the pickup, bless their hearts.

Mims’ pecan pie uses a homemade “corn syrup,” plus brown butter and a tart shot of lemon juice. His peach cobbler calls on scraps of pie dough he’d had stored up in the freezer, an arguably better fate for them than pie crust cookies eaten straight out of the oven, sure to burn your tongue. His coconut cake -- his favorite recipe in the whole book, an adaptation of his grandmother’s recipe -- has no coconut in its batter; the buttermilk-based cake is soaked in fresh coconut water, which you’ll get from the whole coconut that you then shred, by hand, for the icing. (Apparently, back in the 50s and 60s, coconuts were “as common as apples” in Southern grocery stores, thanks to New Orleans’ trade with the Caribbean; hence grandma’s recipe. Now you know!)

More: Get Ben's tips on cracking and using a whole coconut.

You’ll walk away from the book a smarter baker, with a better understanding of technique and a few tricks in your back pocket -- such as a newfound appreciation for salt and vanilla. “I treat salt and vanilla like salt and pepper in desserts,” says Mims. “Our palates have been conditioned” to want them, and they make a dish feel familiar -- anyways, “you can’t taste sweet without salt.”

Now is the perfect time for this book to appear on your doorstep -- we’re all a bit more excited about pies and cakes when there are holidays to celebrate and extra mouths to feed. In the South, Mims explains, “the food is more important than the celebration. The main sport is feeding people.” With this book in your hands you’ll want to throw a cake party, or befriend someone with an upcoming birthday, just for a good excuse. 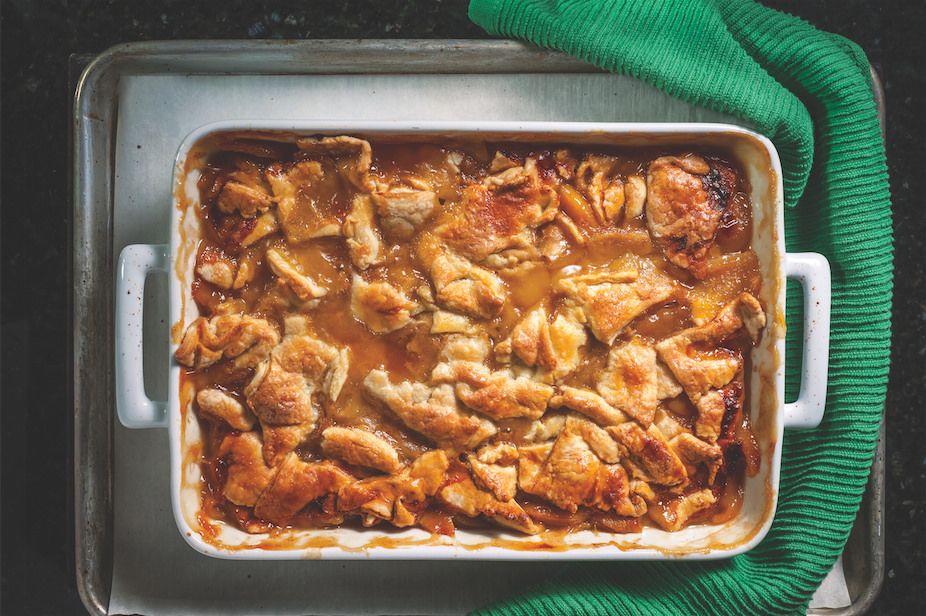 We're giving away a copy of Sweet & Southern every day this week! To enter to win today's copy, tell us in the comments: What is your all-time favorite Southern dessert? We'll choose winners this Friday, September 26th.

Photos by Noah Fecks. Excerpted from the book Sweet & Southern: Classic Desserts with a Twist by Ben Mims. Reprinted by permission of Rizzoli International Publications, Inc. All rights reserved.

marcellatp September 25, 2014
Coconut cake for sure!

Michele H. September 24, 2014
Anything my Alabaman Grandmother made! But her homemade strawberry jam cookies are the best!

Marsha G. September 24, 2014
Coconut cake, hands down. My stepgrandmother Louise was famous for her coconut cake. And I remember one time going to a local BBQ joint -- family owned, of course -- and I just intended to get some 'que, but I walked in and there was this absolutely gorge coconut layer cake under a cake dome on the counter with one slice cut out. I could smell the coconut and the butter through the glass. A son was working that day and he said his mother made all the desserts and that cake had just been made and put out that morning. I got the 'que and a cake slice to go 'cause I was on my lunch break, fully intending to eat everything back at my desk. But I could not resist the cake's siren call and ate the entire slice in my car right then and there. I was a bit late back from my lunch break, but it was so worth it!

Michele G. September 24, 2014
Sliced peaches in milk for me. A bread pudding with bananas and a bourbon sauce, similar to the one served at Galatoire's, if I have guests.

Melissa September 24, 2014
Since I'm already missing peaches, I'll have to say peach cobbler probably with a biscuit top, though I'm not going to turn down the pastry crust!

fiveandspice September 24, 2014
Marian, you are a gifted reviewer!!!! You're making me want to buy all the books!

Stephanie September 24, 2014
One of my earliest childhood food memories was my Grandmother's Lemon meringue pie. It was lemony and sweet with this unbelievable fluffy and light meringue on top that was slightly golden brown in spots. She only made it on the holidays and it was the quintessential southern dessert that brings back fond memories. Wish I had a piece right now. Sigh........

Jen R. September 24, 2014
My southern grandmother wasn't big on desserts. But every year for my birthday she would make a fantastic lemon bundt cake. Served with a generous helping of macerated berries, it was the best thing ever.

Madeleine September 24, 2014
One of my favorite desserts in general, which makes it great that it's also Southern is Carrot Cake with either Cinnamon Cream Cheese Frosting or Orange Cream Cheese Frosting. I always like to add extra cinnamon to the batter, walnuts, and raisins at times, but sometimes a simple "carrot" only cake is all I need :)