All About Yuca and How to Put It to Good Use

Today: We’re talking about another tropical root while we wait out spring's arrival. 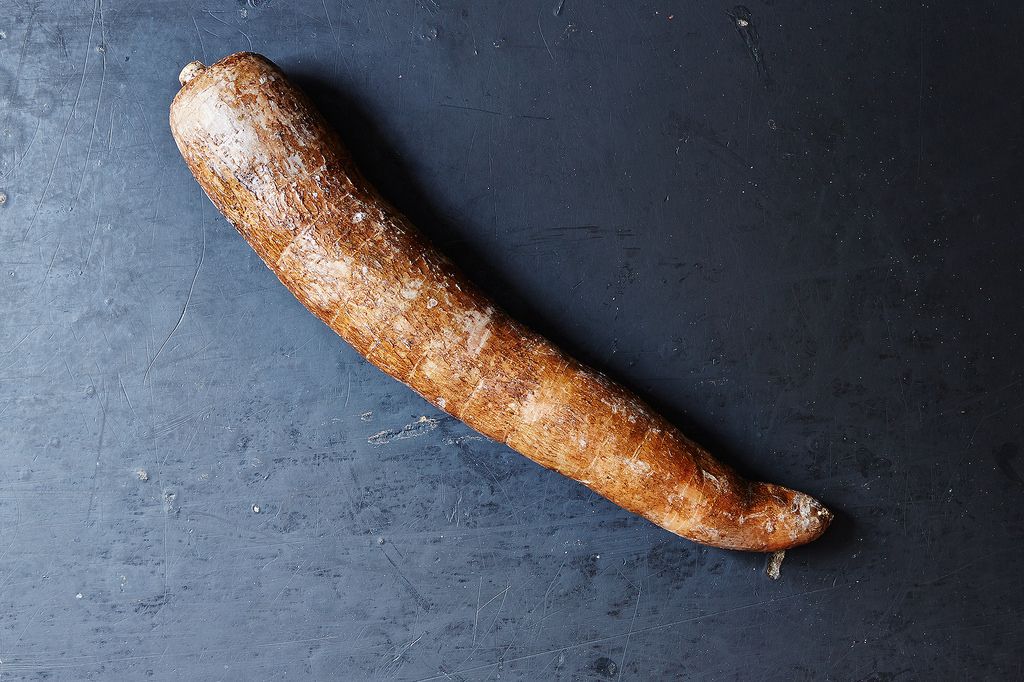 Let's clear this up right off the bat: Yuca is pronounced YOO-ka. And, although you might sometimes see the root we're talking about today spelled with two c’s, there is another plant called "yucca" that is unrelated. (That yucca is in the Asparagaceae family and its name is pronounced YUHK-ka. They are often grown as ornamental plants and while they do have edible parts, too, these are not usually the roots.)

After glancing at this rough root, you might think you're not familiar with yuca (which also goes by the names cassava and manioc), but you almost certainly are. At the very least, you're familiar with a product made from this tuberous root: tapioca. Tapioca -- a starch extracted from yuca -- comes in different forms and can be used as a thickening agent or to improve the texture of gluten-free baked goods. We most often think of tapioca in its pearl form, though -- those love 'em or hate 'em chewy balls in tapioca pudding and bubble tea.

All of this tapioca talk might have you questioning the root’s texture: Once cooked, it can have a stickiness that not everyone finds appealing. Elizabeth Schneider understands the hesitation but puts on a parent hat and urges us to try a bite: “It has a sweetness, butteriness, and a glutinous chewiness that is much appreciated by about half of the world -- so you might at least sample it for the sake of worldliness.” 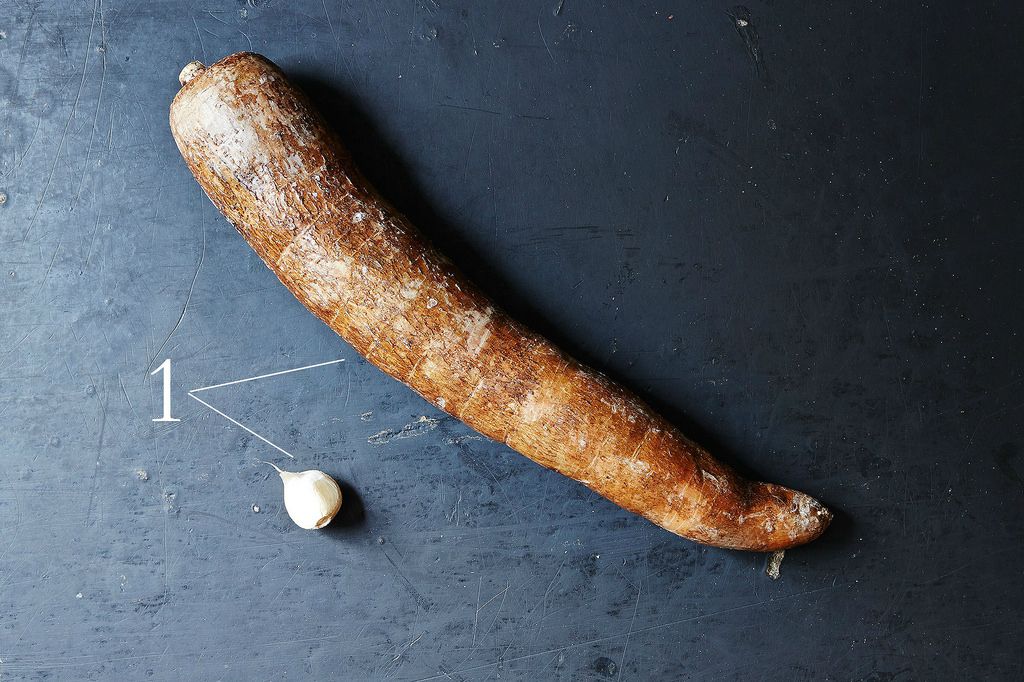 Where to buy & what to look for
Yuca is available year-round, if not at your favorite well-stocked grocery store, then at Asian or Latin American markets. Buy more than you think you need, Schneider suggests, “for even if you select well, there may be some waste.”

Yuca looks a little bit like a small, bark-covered baseball bat -- although “small” is relative: It’s small for a baseball bat, but it’s a large tuber. For comparison's sake, here's ours next to a large clove of garlic (1, pictured above). You might find even larger specimens -- yuca roots can be up to about one foot in length. Look for yuca that is free from cracks and signs of mold. The root will almost always be coated with wax (2, below) to help preserve it. 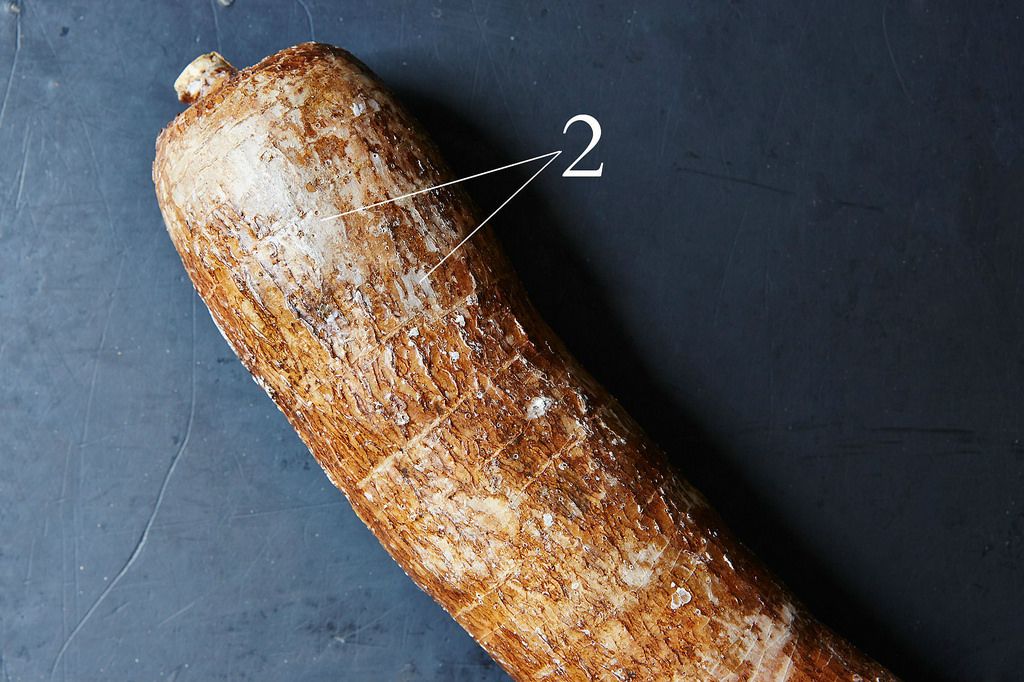 It's okay if you find yuca packaged with a cut end exposed -- it's done to give you a good view of the flesh, which should be pure white (7, far below). Dark streaks (5, far below) running through it can indicate that it’s past its prime and the flavor might be compromised. Cut those pieces away if you see them, and if they run through the whole root, discard it. (This is why Ms. Schneider told you to buy extra!)

How to store & prep
Yuca has a shorter shelf life than you might expect -- for such a thick-skinned root, it doesn’t store all that well. Keep it in a cool, dry place and use it quickly -- within a few days -- or freeze it in peeled chunks (you can buy bags of frozen yuca, too).

Elizabeth Schneider suggests you’ll have an easier time peeling yuca if you look for the pinkish layer of skin (3, below) underneath its rough, bark-like exterior. To get to that layer, cut each tuber into smaller 2- to 3-inch sections, and then cut a lengthwise slit down each section in order to see the layer skin under the bark. Wedge your paring knife under the pinkish layer, peel off that layer and the bark with it, and then cut away any remaining pink spots.

In my experience, I've found that simply slicing away strips (4, below) with a paring knife after cutting the yuca into chunks is just as easy, if not easier. Cut chunks in halves or quarters and remove the central fibrous cord (6, below) -- or remember to do so after cooking. 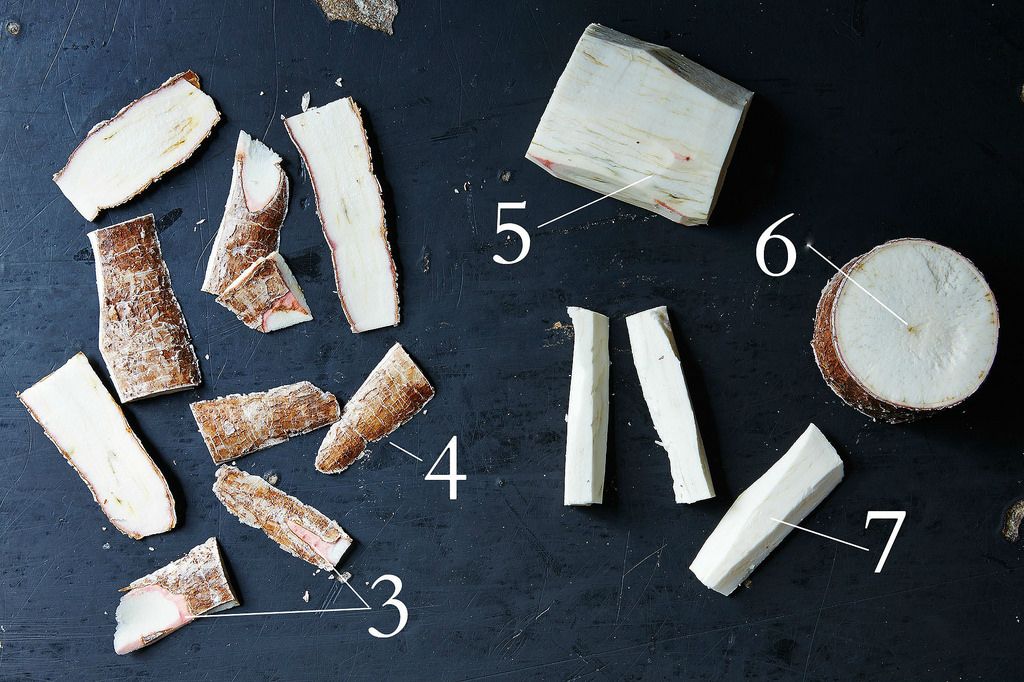 A note of caution
Like taro, yuca needs to be cooked before eating: Don't eat it raw. You might have heard that yuca contains cyanide, and it does, but there’s nothing to worry about with the yuca you’re buying at the grocery store.

That's because yuca comes in two main varieties, sweet and bitter, and the difference between them is due to the levels of cyanogenic glucosides in the root. In the U.S., we’re getting sweet yuca -- mainly from the Dominican Republic and Costa Rica -- and the toxin levels are low enough that peeling and cooking gets rid of them. Bitter, higher-cyanide cultivars are still edible with the right treatment, but you’ll probably have to head to Africa or Brazil to try them. Or you can settle for trying them in their processed forms, like tapioca, manioc meal, and yuca flour.

How to use
The yuca root can be put to use in a wide variety of ways. We know we're starting to sound like a broken record, but it's not just us; Steven Raichlen calls it "one of the most versatile roots in the vegetable kingdom." So get cooking:

Tell us: How do you like to eat yuca?

Sevie G. December 3, 2016
Are sweet yuca and bitter yuca off of the same plant? Is it the size that makes it bitter or sweet? I've read that bitter yuca are bigger. Also I would like to know how you distinguish a sweet yuca from a bitter yuca from taste? From color? Or just by size.

Lindsey August 12, 2016
A very informative post. Not too many of those around about yuca. Thank you!!!

Laila E. June 24, 2016
I grew up with Yuca as a comfort food. We boil it until fork tender then drizzle with a little EVOO and sprinkle a little kosher salt on it.

Shahrizat J. March 9, 2015
A favorite in Malaysia too. There are several ways they are prepared, and can be either savory or as dessert. Here's a simple recipe for desert. Boil until tender and drain water. And then mash, add some sugar and a little bit of salt for balance. The mash is then press-formed into patties/cake and chill in fridge. Serve with freshly grated coconut seasoned with salt.

Erika March 9, 2015
I wish you'd have added the healthy benefits of Yuca. Brazilian indians have been consuming them for centuries and It's wildly popular around Latin America. I like to make Yuca bean soup, where I cook the yuca (with olive oil, garlic, salt, black pepper). Once it's soft, mash a few of them so the broth thickens. Throw in cooked white or pinto beans. and let it cook for another 5-10 min. Serve it hot with a little hot sauce. Many like to add chunks of beef but I'm a vegetarian so mine don't have any meat.

Maria J. March 9, 2015
We make some sort o sheperds pie (instead of potatoes we use yuca) and the filling could be canned tuna, shredded chicken, etc-

Lizzy W. March 8, 2015
My husband peels and cuts yuca into fries then marinades in lime juice garlic and cilantro overnight..he then bbq's them! They are so good!!

Jenny H. March 7, 2015
So good in a long simmer soup with other roots and chicken!

Richard M. March 7, 2015
Grated finely, and use as part of a masa. The masa is filled with seasoned meat and fried. This is a Puerto Rican fritter called Alcapurria.

Poonam March 7, 2015
Chili Mogo! I believe it originated with the large expatriate South Asian community in East Africa (or perhaps it was just very popular there), it is basically yuca fried and then topped with a curry-like chili sauce. This youtube video seems to show its preparation, though I confess I've never made it at home. https://www.youtube.com/watch?v=0nbnGUQYdT4