Today: With this turn-of-the-century recipe, basic beans become a crisp on the outside, creamy on the inside croquette. 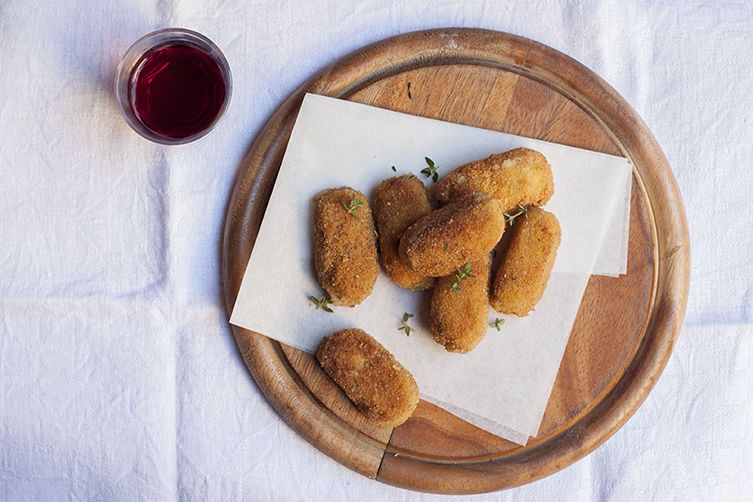 Loved throughout the entire boot of Italy, croquettes—rolled, crumbed, fried morsels—are found in many forms and with many diverse ingredients. The meat versions, generally known also as polpette (meatballs), are often made with a “clear out the fridge” philosophy: Minced meat, sausage, and even salami or mortadella might find their way into the mixture, along with herbs and perhaps some nutmeg. A combination of egg and grated Parmesan cheese binds the batter together before each ball is dipped in egg, crumbed, and deep fried.

In Venice, the minced meat is often mixed with mashed potatoes for a somewhat creamy filling; in Rome, bollito, or boiled meat, makes a cheap and rustic filling; and in Tuscany, tripe balls are a favorite. Fish such as tuna (even canned tuna) and especially baccalà (salted cod) often take the place of red meat, and many meatless versions exist, too: There are croquettes made of ricotta, eggplant (found in Sicily), and, as in this recipe from Tuscany, cannellini beans. 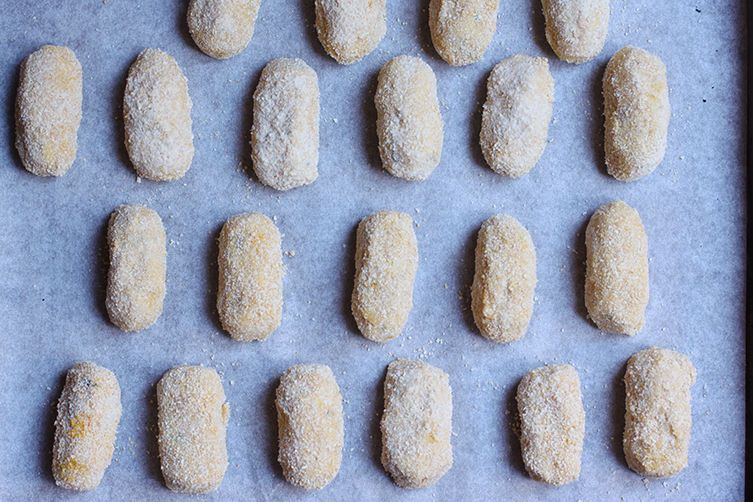 They are inspired by a recipe found in a Tuscan cookbook from the turn of the century, Leaves from Our Tuscan Kitchen. This wonderful little book of vegetable recipes was originally published in 1899, though it's still in print. It was written by English historian and Florentine expatriate Janet Ross, and includes recipes from her cook, Giuseppe Volpi.

The book’s recipe for bean croquettes calls for 1 quart of dried beans (which would equal nearly 6 pounds, or 3 kilos, of cooked beans), which are cooked, mashed, and mixed with plenty of butter, a dash of vinegar, and some lemon balm before being crumbed and fried in butter.

I loved the hint of vinegar and minty lemon balm perfuming the earthy, creamy cannellini beans, though I did adjust the recipe so it uses a smaller quantity of beans and grated Parmesan instead of butter. You could also use other herbs if lemon balm is difficult to find. I found that pan-frying these delicate croquettes in a little butter and oil held together better than deep frying in oil. The result is a crunchy on the outside, smooth and creamy on the inside croquette, which would be perfect as part of an antipasto platter. 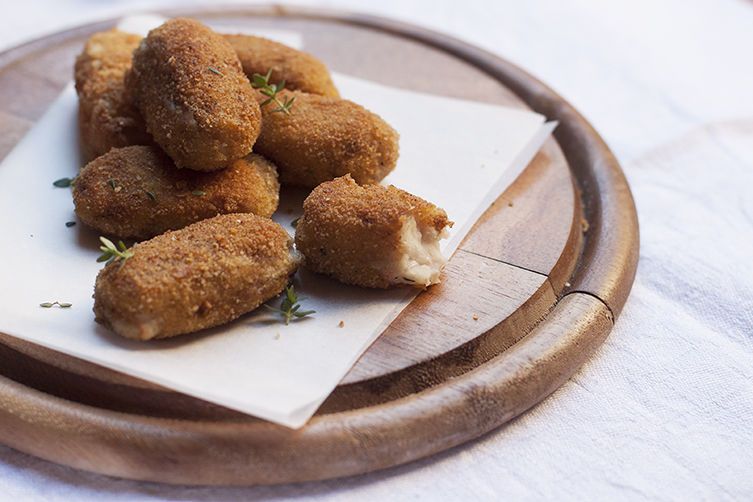 at Y. April 8, 2015
i made these last night.....i added parmesan to the mashed beans....the bean mixture needed a binder, it was too dry as is...with 1 large egg it was perfect!
i used my breadcrumb mixture that has sesame seeds in it....fried in olive oil only and served with spicy pepper relish.....really delicious
Author Comment

Emiko April 8, 2015
Thanks! Parmesan is meant to be in the recipe, it was accidentally left out of this list but you will find the ingredients in the recipe adjusted now (apologies!). It's meant to be quite a firm mixture, easy to roll into a ball. Perhaps a bit too much liquid was cooked out if it was too dry, as you shouldn't need to use an egg in the mixture in this recipe (it would make it way too wet to handle if starting with the right consistency) but glad you enjoyed these your way too!

LeBec F. April 7, 2015
hmmm, emiko, do you know that Jerry Maguire reference? well, you had me at 'croquettes'. I'm not sure I ever met one i didn't like. In fact, I would have to call "crunchy and creamy" my favorite food phrase!
So, i will make this recipe as written, and THEN I will:
--add shimp and pimenton dulce(or cajun spice mix) and lemon juice
and
-- add ground parmesan and basil
and
-- make a smaller center oval of the original recipe
and pat around it a tuna croquette mixture of canned tuna, lemon juice and very thick beschamel; then coat and chill the croquettes a few hours before frying.
oh boy oh boy! Th you for the inspiration!

JoyJoy April 7, 2015
Hello! You mention parmesan (replacing butter in the bean mixture) in the article, but I don't see it listed in the recipe. How much parmesan should the recipe have? Thanks.
Author Comment

Emiko April 8, 2015
Thanks for pointing that out! I've edited the recipe (the link is under the ingredients list) so you should see that addition in there now when you go to the recipe.