The Story Behind The Most Popular Salad in New York

We partnered with California Walnuts to trace the history of New York's most storied salad. Add your version to their timeline by submitting an original recipe to their contest here. Read on to find out more. 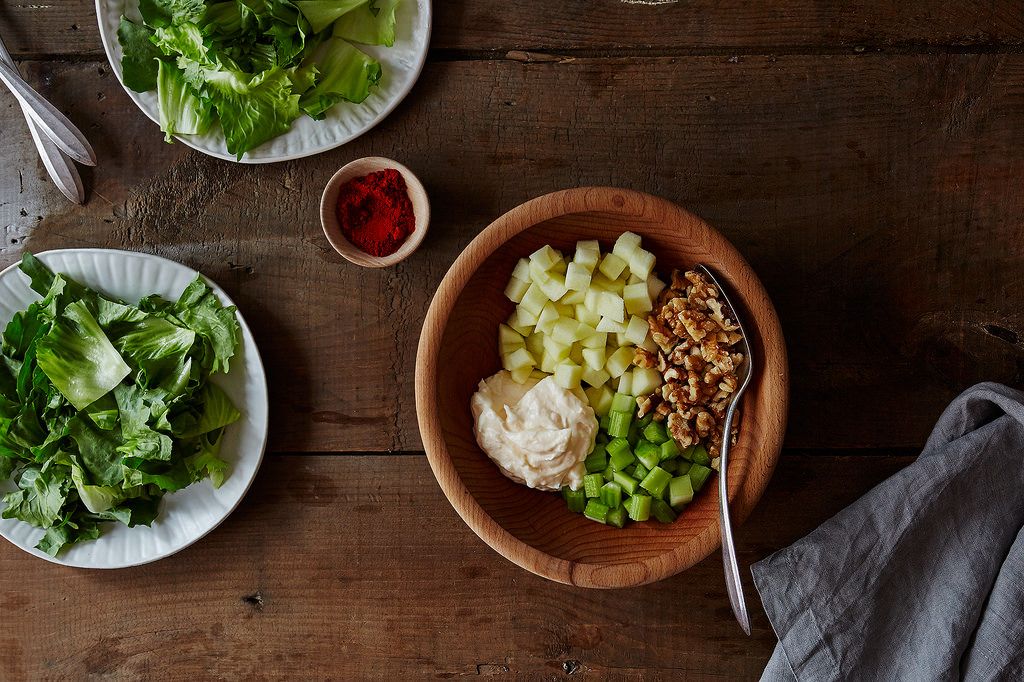 When Chef David Garcelon arrived at the Waldorf Astoria Hotel close to four years ago, he was surprised to find that not one of the hotel’s several restaurants was serving the exact same recipe for its most popular dish: the Waldorf salad. Though it was being ordered 20,000 times a year, it wasn't being prepared the same way across different outlets in its original home. Once you dig into the history of one of the last century's most ubiquitous dishes, this oversight doesn't seem so odd: Everybody has their own opinion on how it should be made.

“Things go in and out of vogue,” Matt Sartwell, Managing Partner of Kitchen Arts and Letters, says matter-of-factly as we pore over several turn-of-the-century cookbooks at his bookshop. Some are worn with age, some are better preserved, and almost all have that mustiness that pleasantly lingers with you after leaving a museum or library.

We weren't talking about recent food trends. We were studying the Waldorf salad recipe (and the ways it has changed). 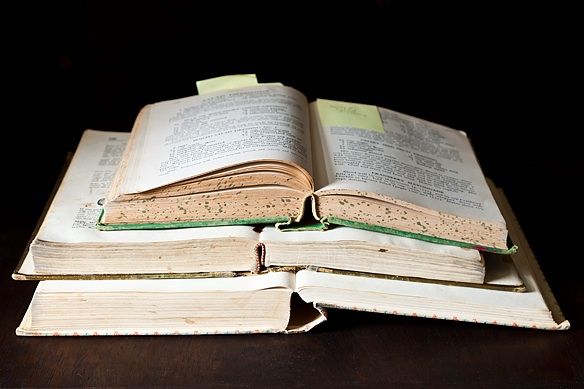 It’s widely known that Oscar Tschirky—the storied, original maître d'hôtel of the Waldorf Astoria Hotel—was the creator of the notorious salad. The original recipe can be found in his cookbook, The Cookbook by Oscar of the Waldorf, with only three things: apples, celery, and mayonnaise (no walnuts to be found). The most intriguing part of the history of the dish that he’s most known for—and a testament to the recording of recipes—is how many iterations it's been through in its lifetime. In each cookbook Matt and I looked through, not one recipe for the salad had the same ingredients. 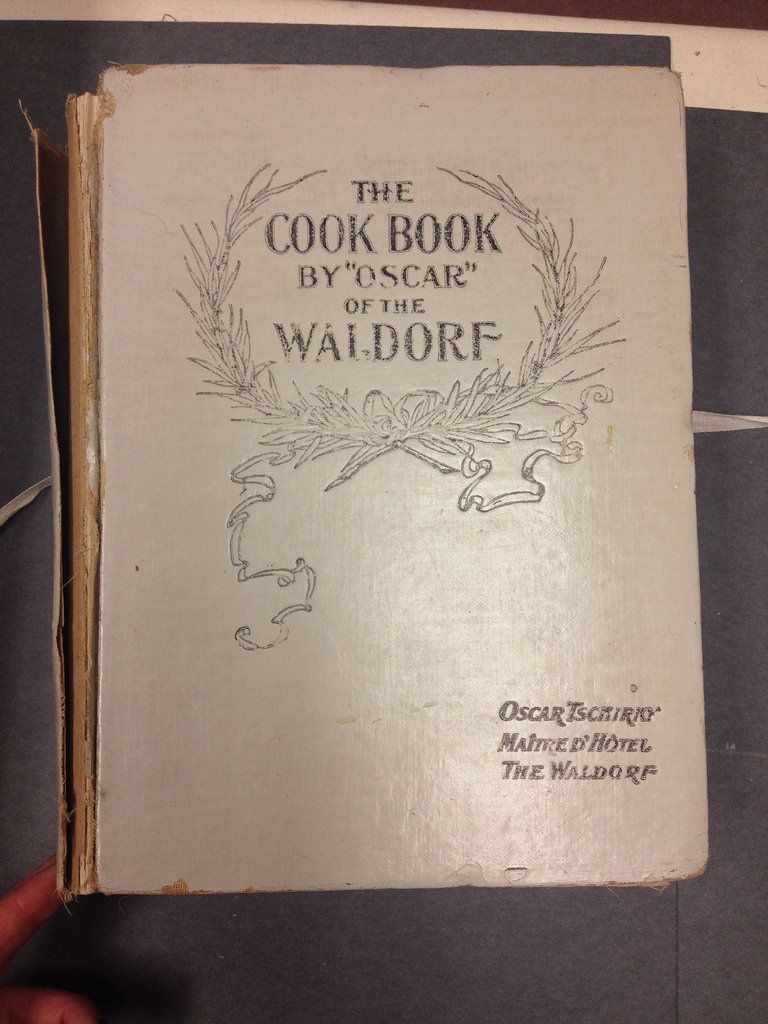 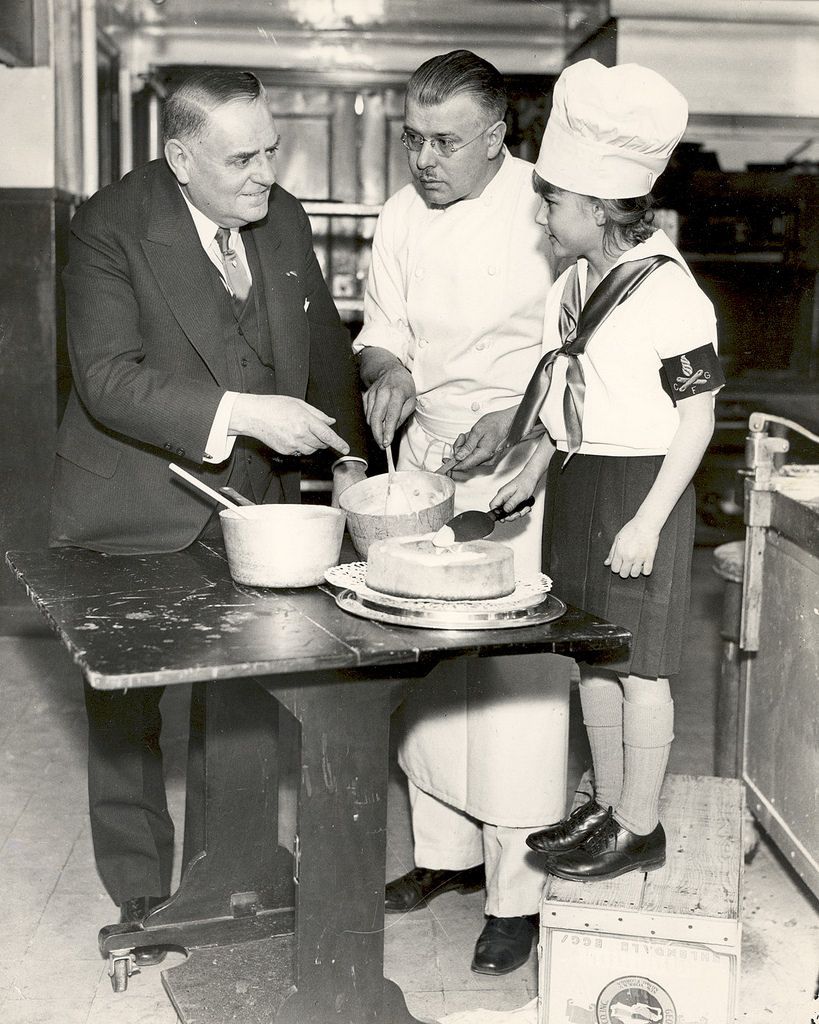 Left: The Cookbook by Oscar of the Waldorf; Right: Oscar with chef and a Camp Fire girl

Over time, walnuts seem to have become integral to the mix, first showing up in a recipe, Chef Garcelon told me, in a cookbook by Escoffier, and then more widely found in 1928’s The Rector Cook Book. Matt mused that the addition could have been as off-handed as someone’s father owning a walnut farm, or a chef who thought the salad lacked balance and savoriness. The ingredient list continued to grow as years went on, possibly due to nothing but someone’s personal interpretation. 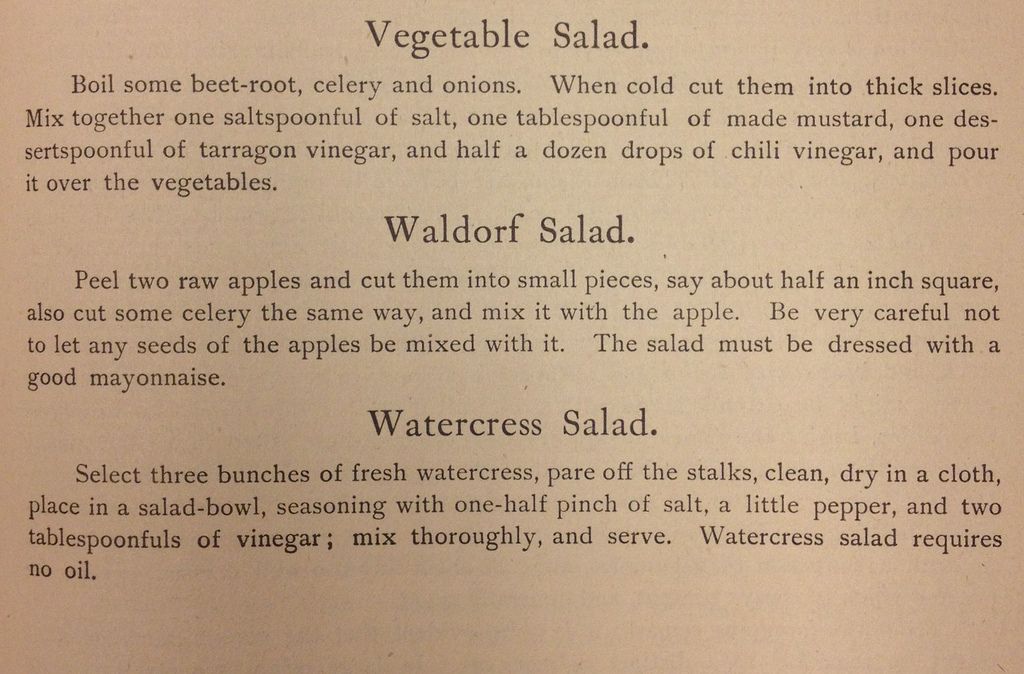 The version in George Rector's Home at the Range from 1939 feels thoroughly modern with bits of bitter greens and a dusting of paprika. American Food by Evan Jones has a recipe that includes mayonnaise made with walnut oil. Matt told me his mom always added raisins, and a Food52 staffer said her parents even used whipped cream instead of mayonnaise. Gelatin and cider vinegar come into the mix in The American Century Cookbook's recipe, and there’s also been talk around the office of additions like marshmallows and hard-boiled eggs. 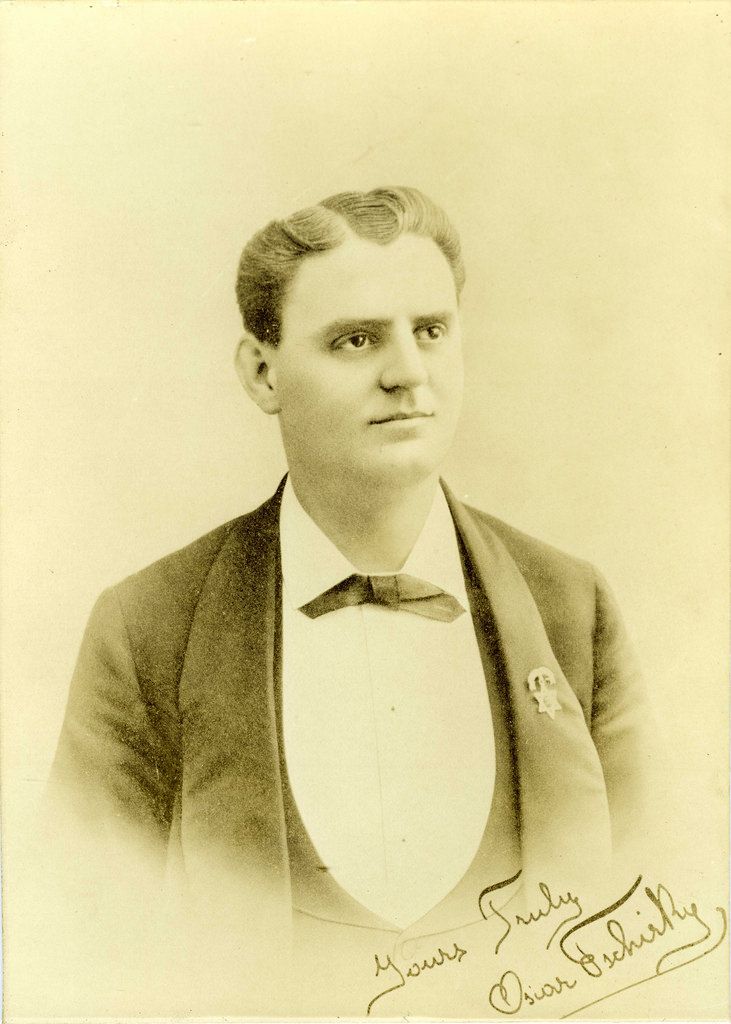 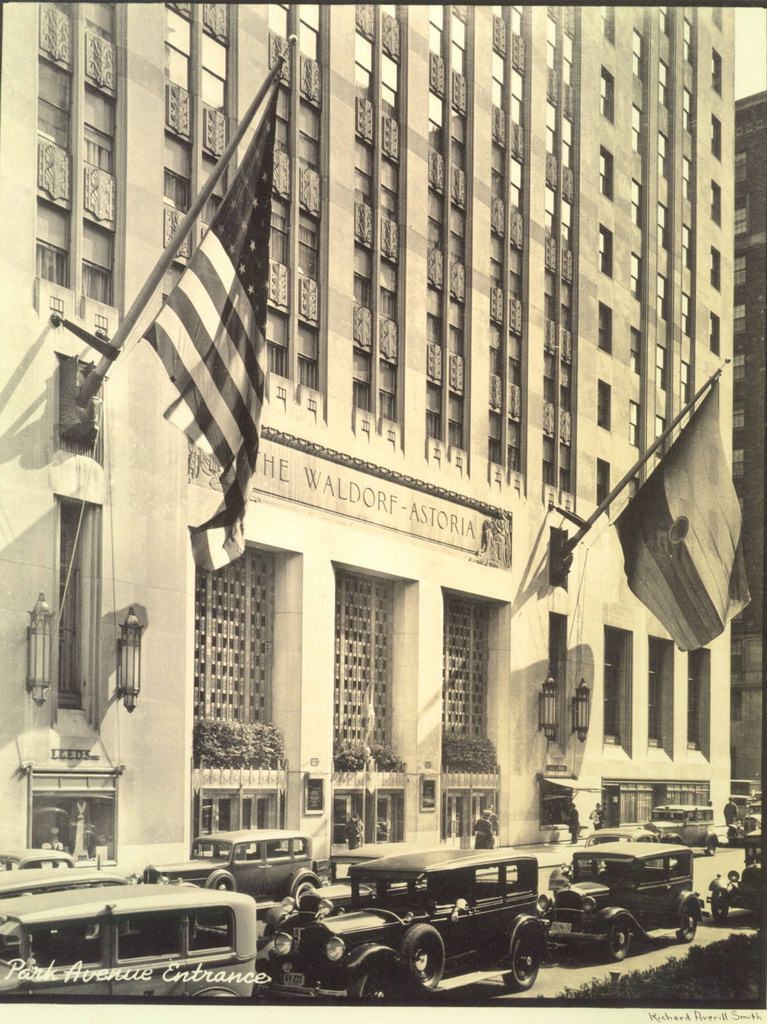 As noted by Evan Jones in American Food, the salad was born for a 1500-person “society supper” to celebrate the opening of the Waldorf in the spring of 1893. It came to life in the heyday of cold salads, when midday meals touched the edge of the afternoon. Sweet salads were all the rage, even when it seemed like a fad in the early 20th century. (It’s mentioned in American Food that Sheila Hibben, cookbook writer and journalist at the New Yorker for the first part of the 1900s, thought the Waldorf salad was a “mixed blessing.”)

“Society's accepted notions of mealtimes and components of meals have changed drastically over time,” Matt reminded me as we pawed through recipes, each reinterpreted for a new decade. 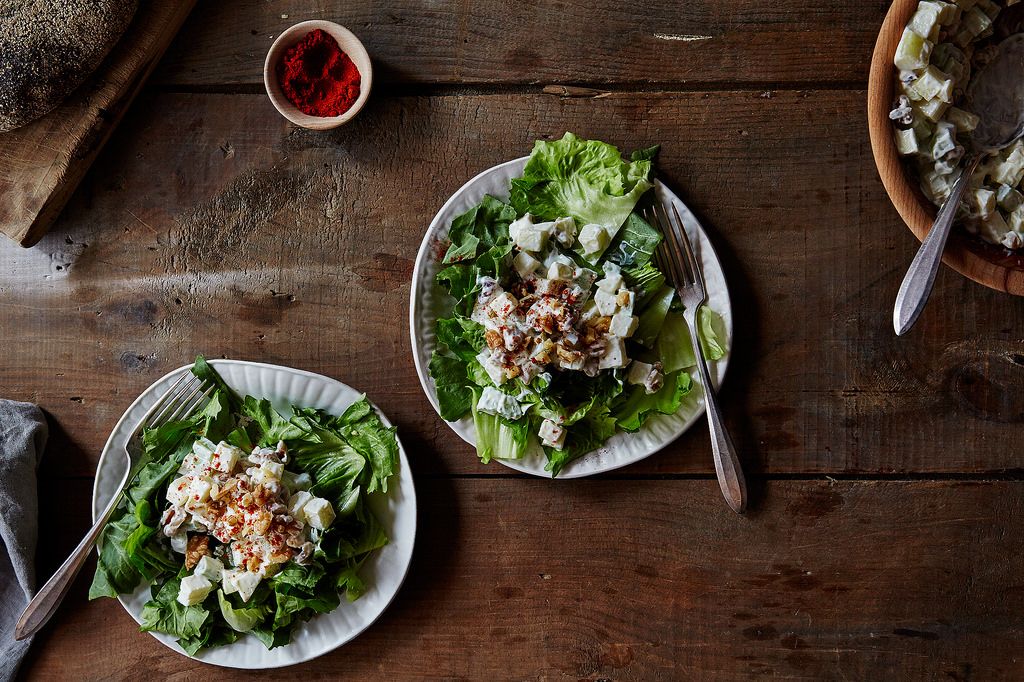 According to Chef Garcelon, Oscar was a celebrity in his own right. Before the time of highly visible chefs, he said, Oscar was the one who spoke to guests—he was the person who was educating people about food and wine at that time. Oscar was born in Switzerland and worked his way up during the rise of the restaurant, from unknown busboy to maître d' of Delmonico’s and then, subsequently, the Waldorf.

Stepping into a strong culinary tradition like the Waldorf’s, Chef Garcelon synthesized all of the hotel's different preparations for the salad and decided to reimagine it in his own way: Today, he uses julienned green and red apples, celery root brunoise, truffle oil, candied walnuts, microgreens, and an emulsified vinaigrette. To him, this brings the Waldorf salad up to speed for 2015. And despite its age and divisive reputation, it’s still the most ordered dish on the menu. Talk about staying power. 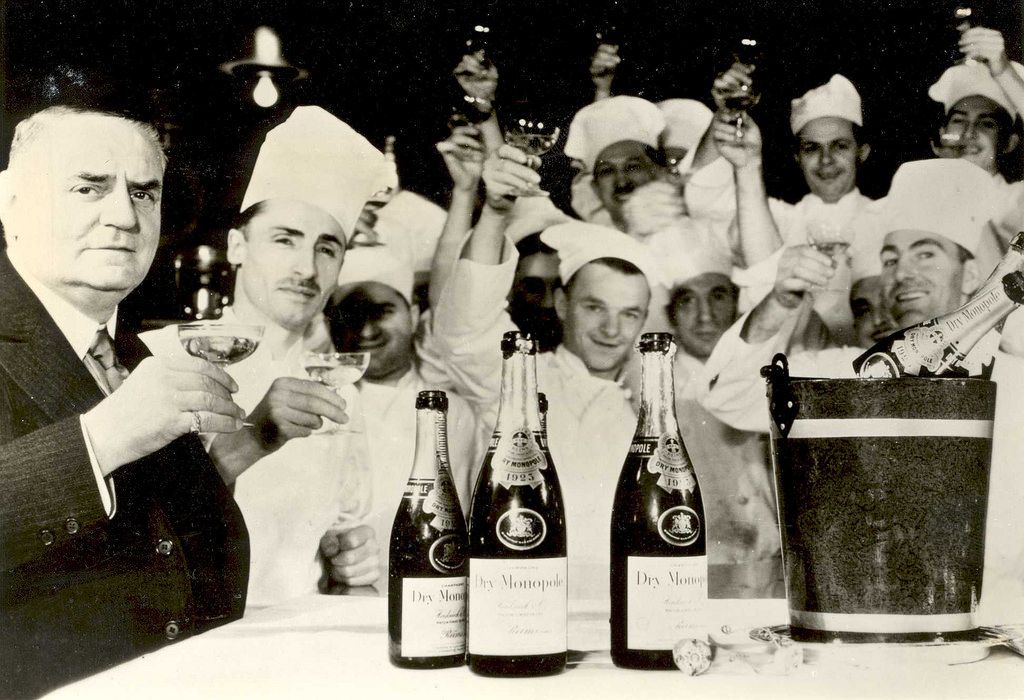 Oscar and his team celebrating the end of prohibition

We partnered with California Walnuts to trace the history of New York's most storied salad. Submit your version to their contest here for a chance to be featured on the menu of the Waldorf Astoria Hotel's Sunday Brunch menu.

Rebecca S. August 3, 2018
At our house, Waldorf Salad was a holiday favorite. Our take: apples (mostly peeled), celery, softened raisins (quick zap in the microwave with a little orange juice or water), halved red or green grapes, halved maraschino cherries, walnuts, a little sugar, a little salt, and plenty of good mayonnaise. I always make extra to eat for breakfast the next morning.

Laura August 2, 2015
according to my mother's version (from a thick green cookbook), Waldorf Salad was dressed with a scratch-made boiled dressing - that wouldn't be mayonnaise, would it?

Pete N. August 2, 2015
A Boiled Dressing can be thought of as sort of a Hollandaise Sauce and I think the chef may have made his own mayo which is a little lighter and without vinegar.
Author Comment

Sharon July 6, 2015
Gee, Waldorf salad. Haven't thought of it in more decades than I care to own up to. I grew up on this salad, as my parents liked it and made it often. It was always on the Thanksgiving table, with walnuts for that special occasion. They used to serve it in iceberg lettuce cups as a side dish. This was way back in the day when iceberg was practically the only lettuce to be found in America. We've come a long way, baby! But, I never cared for this salad and stopped eating it once I was old enough to rebel (around seven or eight years old). However, being obsessed with food history, I really enjoyed reading this. It hit a deep tap root of very pleasant childhood memories, and made me consider adding a Waldorf to the holiday table this season. Just because I don't care for it doesn't mean others won't enjoy it. Thanks for the article.

Pete N. July 5, 2015
Very interesting and I went back through my collection of Fannie Farmer Cookbooks and found that the original that she listed did not mention walnuts but in the 1939 edition they had been added. My mother was a wonderful cook and she introduced me to Fannie as a child and she made Waldorf salad on a regular basis. It has been interesting that many recipes were deleted over the years but got re-instated later on.

AntoniaJames June 29, 2015
I found it interesting to note that in the version of "The Escoffier Cookbook" that's on my shelf, the recipe calls for soaking the walnuts for 15 minutes. Wonder why . . . . (The inclusion of "clear mayonnaise," along with a reference to the procedure for making it found elsewhere in the book, also intrigued me.) ;o)

amysarah June 29, 2015
I have no clue about the wet walnuts, but clear mayonnaise might just be a poor translation from French - 'en clair' means plain, so maybe the original called for 'mayonnaise en claire' as in not flavored with garlic (i.e., aioli) or anything else. Just a guess!

AntoniaJames June 29, 2015
For those of you who might be interested in some other 19th century sources discussing Waldorf Salad, take a look at this: https://www.google.com/search?q=cookbook+%22waldorf+salad%22+&btnG=Search+Books&tbm=bks&tbo=1#q=cookbook+%22waldorf+salad%22&tbm=bks&tbs=cdr:1,cd_min:1800,cd_max:1899
(Ask me sometime why I like Google Books so much. There's more to the story than you think.) ;o)

nancy E. June 26, 2015
Now this is why I joined food52. Not for dumbed down statements but great articles about food and great recipes.

amysarah June 26, 2015
Really interesting - thank you! Would love to see more pieces about the history of iconic dishes/roots of current ones. For me, it would also be a good balance to regular features focusing on trends, what's in/out, what we like this week, etc.

madeebeth June 26, 2015
Thank you for this wonderful article! I've sent the Tschirgi clan (Changed in the states, yet no easier to spell) this lovely extended account, that not only is a fascinating piece of culinary history but also might explain our love of mayonnaise.

Rebecca Z. June 26, 2015
The correct term is 'pore over' rather than 'pour over.' The latter implies you are spilling a liquid over your reading.
Author Comment