The Pie That Says "Home" to Yossy Arefi

We interrupt our regularly scheduled Project Dessert to bring you the next in our "Meet Our Contributors" series—Food52's version of show and tell. We're asking some of the voices behind your favorite columns to share a recipe that represents them (and explain why). 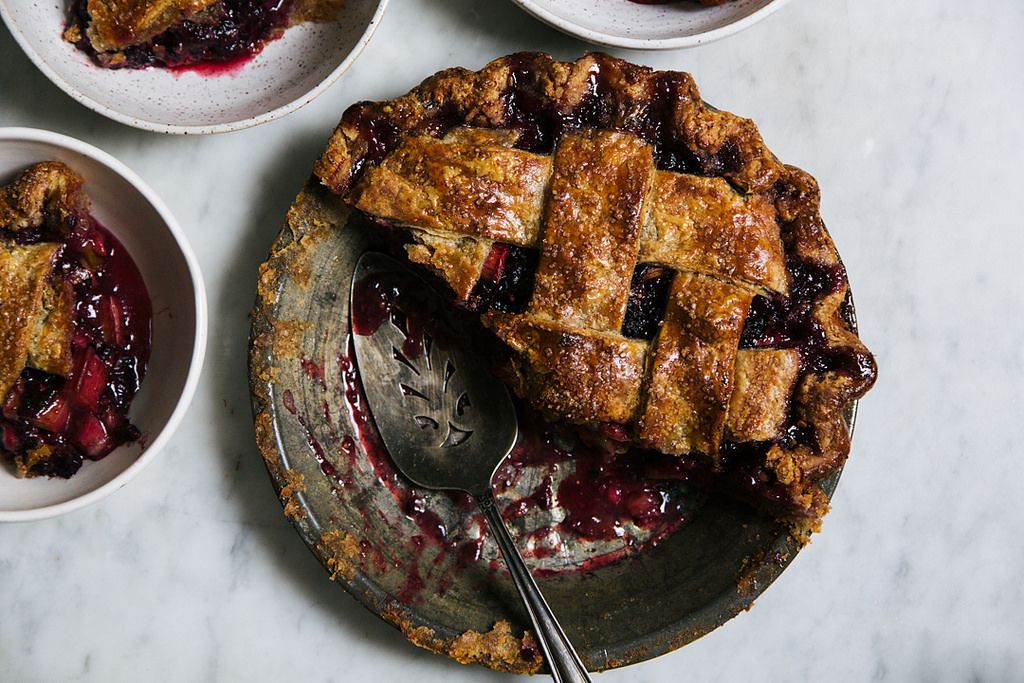 Tell us about this recipe—what about it makes it you?
Between writing my book and blog and my general love for fruit in buttery crust, I have made so many fruit pies over the last couple of years that they have become my favorite thing to bake (just see my Instagram). The first time I made a blackberry rhubarb dessert was during my annual summertime visit to see my family in Seattle a few years ago. It was the August after my brother’s twin daughters were born, and his family had just moved into a new house. It was wild blackberry season in the Pacific Northwest, and my dad and I had picked blackberries from his favorite secret spot earlier that day so we had a pile of freshly picked blackberries sitting on the counter just waiting to be used. My parents’ rhubarb plant had a few last stalks that were looking wilty from the heat, so I picked those too, then combined them with the blackberries and made a crisp covered with buttery streusel. 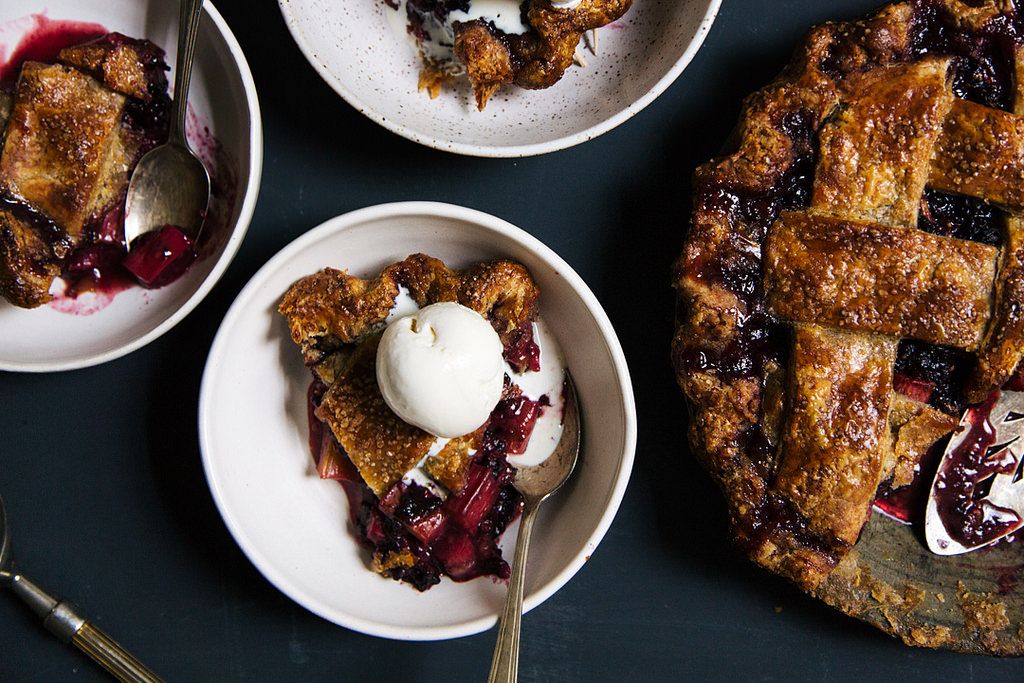 We took the crisp to my brother’s new house, then after the babies were in bed, we ate bowls of it warm, topped with Earl Grey Ice Cream from Molly Moon’s. The combination was perfectly buttery, sweet, and tart, with little crunchy bursts of seeds from the blackberries and soft silky pieces of rhubarb.

To me, this recipe feels like my favorite place (Seattle in the summertime), family, and the place where I am most at ease: in the kitchen. 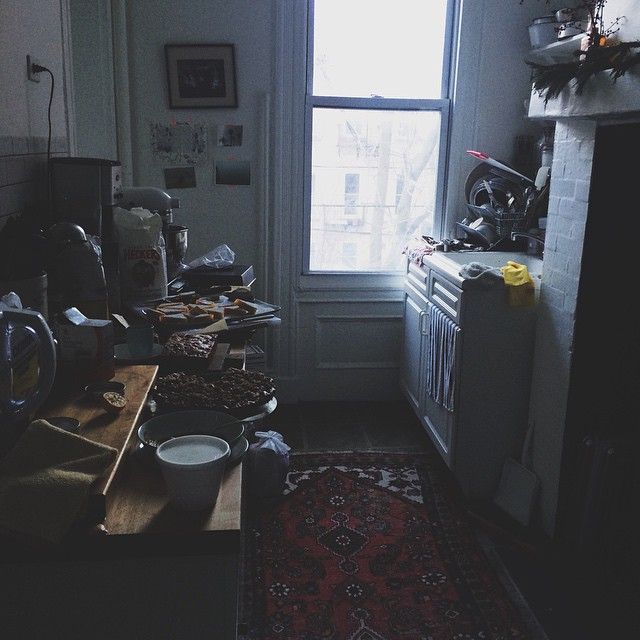 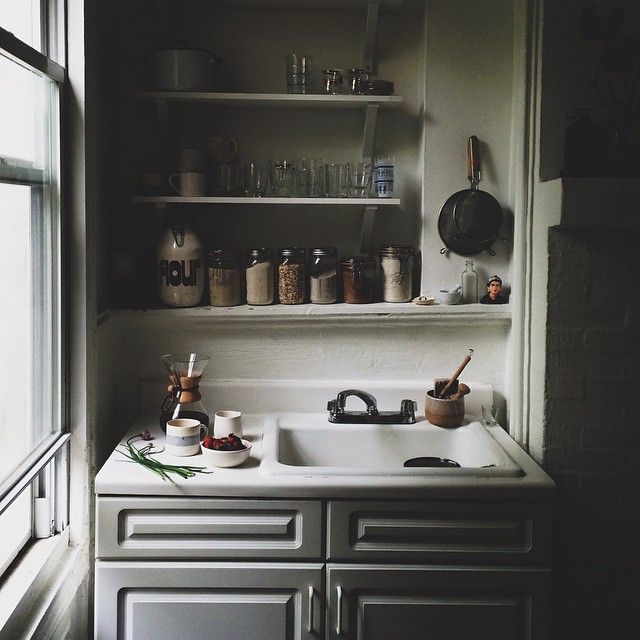 What is your desert island food (practicalities aside)?
Bread and cheese. Maybe some super-chilled white wine too. I mean, I am probably going to get thirsty on this island, right?

What is your vegetable spirit animal?
Oh, I don’t know, I am the worst at questions like these. Something that is maybe a little prickly and unassuming at first, and requires a little coaxing and care to appreciate, but once you do, you get to the good stuff. Maybe an artichoke? Yes, I’ll go with an artichoke. 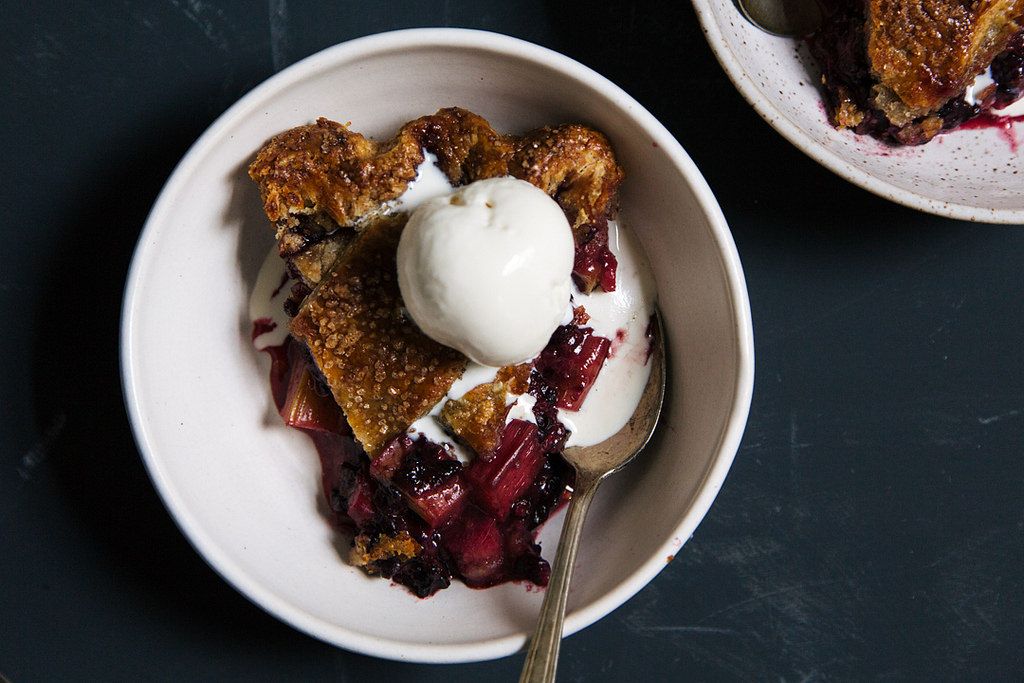 What's one food you pretend to like but secretly hate?
Sorry East Coast, but I think lobster is pretty overrated. Seriously, give me some Dungeness crab and a vat of melted butter over lobster any day.

What is your greatest/most exciting culinary failure?
I’m lucky to have never really royally failed in the kitchen. I am not immune from making a crappy dinner or over-cooking eggs, but I don’t have any “Oh sh*t, I just dropped the birthday cake” kind of moments that I can recall. One time, I did have an ambitious dinner party in my former studio apartment that ended with a bathtub full of dishes and spaghetti, which was less than pleasant to wake up to the next day.

Combine the water and apple cider vinegar in a measuring cup. Make a well in the flour/butter mixture and slowly stream about 6 tablespoons of the water-vinegar into the dough while mixing gently. If the dough seems very dry, add more water a couple of teaspoons at a time. You have added enough water when you can pick up a handful of the dough and squeeze it together easily without it falling apart. Press the dough together, then split it in half, form into disks, and wrap each disk in plastic wrap. Chill the dough for at least one hour before using, or preferably overnight. 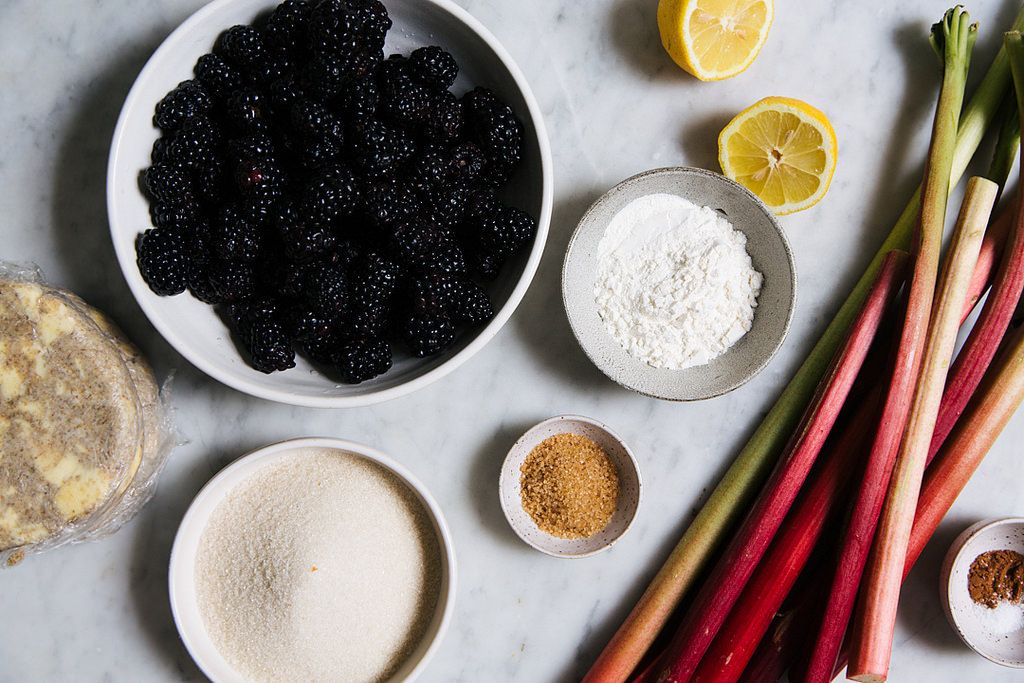 When you're ready to make the filling and assemble the pie, preheat the oven to 400º F. In a large bowl, combine the sugar, lemon zest, and vanilla bean seeds. Use your fingers to rub the zest and seeds into the sugar, until well combined and fragrant. Stir in the flour, cinnamon, and salt.

Cut the rhubarb into 1-inch pieces and add it to the bowl. Add the blackberries and lemon juice, but don't stir quite yet.

Stir the filling ingredients together, then fill the pie shell and top with the second crust. 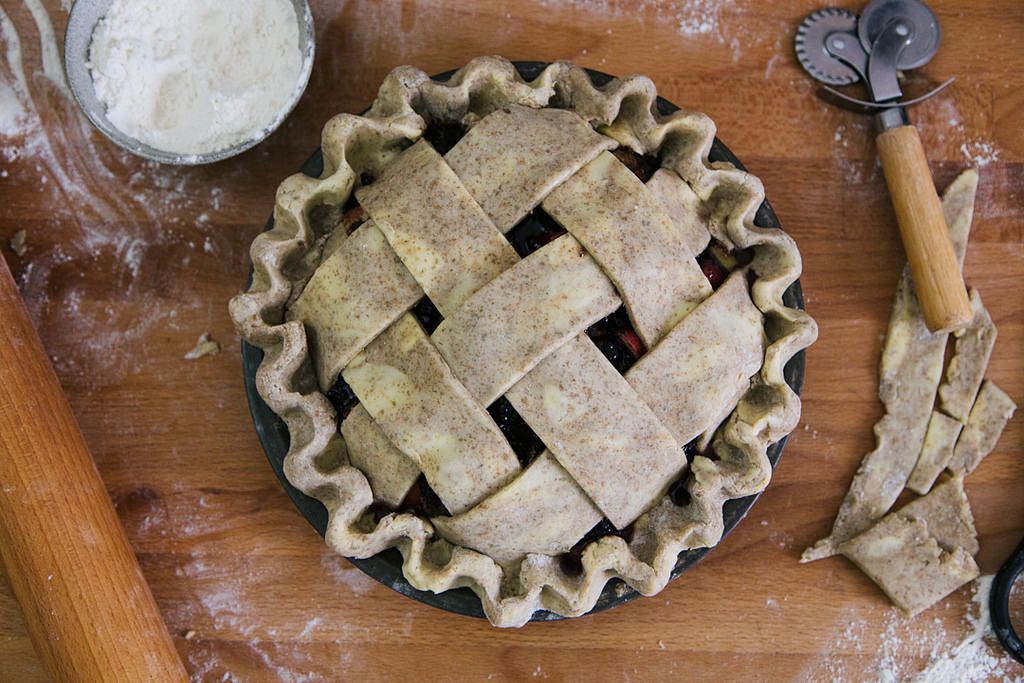 Trim the edges so they are even, then crimp them together. Alternately, cut the second crust into 1 1/2- to 2-inch strips and weave a lattice top.

Slide the whole pie into the fridge or freezer for about 15 minutes, or until the crust is very firm. When you are ready to bake, carefully and gently brush the top of the pie with a beaten egg and sprinkle with a healthy dose of coarse sugar.

Put the pie on a baking sheet to catch any drips and bake for 45 to 55 minutes, or until the crust is a deep golden brown and the juices bubble. Cool it before slicing and serving. 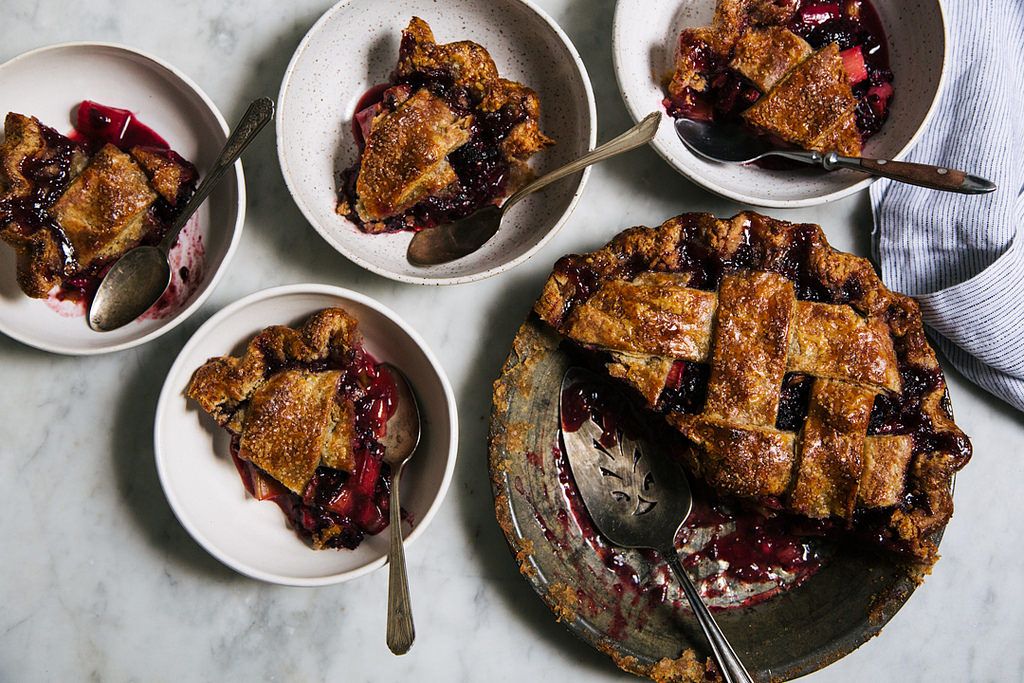 Photos by Yossy Arefi and video by Pete Lockhart.

Darlene July 4, 2015
Ahhh, these photos are SO beautiful.

Yossy -- I can definitely see very large piece of butter in your crust, how do you avoid having the butter all pool out of the crust when it bakes in the oven? I can't seem to avoid butter pooling when I bake pies. :(

Yossy A. July 11, 2015
Thank you! True, there are large pieces of butter in this crust, but they are very, very thin shards rather than chunks that are well coated with flour so they tend to puff rather than weep when they hit the hot oven. I also make sure that the butter stays super cold throughout the entire process from mixing the crust, to rolling and shaping it. I also give my pies a brief rest in the freezer before baking in a super hot oven to make sure the water in the butter quickly creates steam which makes flaky layers, rather than melting into pools. Sometimes I do get a bit of weeping in the oven when I have left a couple of butter pieces too big, but no more than with any other style of pie crust. I'd say quarter/walnut to nickel/dime sized thin shards of butter are ideal for a flaky crust

Darlene July 11, 2015
Thanks so much for taking the time to respond! I'll keep your tips in mind the next time I try. :)

Jen B. June 29, 2015
Blackberry and Rhubarb scream of my grandmother's house to me. A rhubarb pie was always the first of the season for my grandfather (his favorite) and I loved the blackberry ones after spending the day picking them off the bush in their garden behind the neighbors garage.... warm, fragrant, sweet memories.....

Verónica L. June 19, 2015
Beautiful pie! I enjoyed watching the video with my cup of coffee in hand right from my office cubicle at work. Is it crazy of me to say that it was relaxing? The only downside is that now I wish I had a slice of that pie. Thanks for sharing.

Angela June 19, 2015
Seattle in summer, yes!! I recently overheard a rhubarb seller at the farmers market saying his favorite pie is blueberry rhubarb, so this blackberry rhubarb combination is intriguing! I'd love to try the rye crust too, but how to make the streusel option instead?

Yossy A. June 19, 2015
Hi Angela, search my blog: apt2bbakingco.com for "Blackberry Rhubarb Crisp" and use the streusel topping from that recipe or any other crisp topping you like.