Today: A seafood gumbo passed down from generation to generation—with a few secrets, of course. 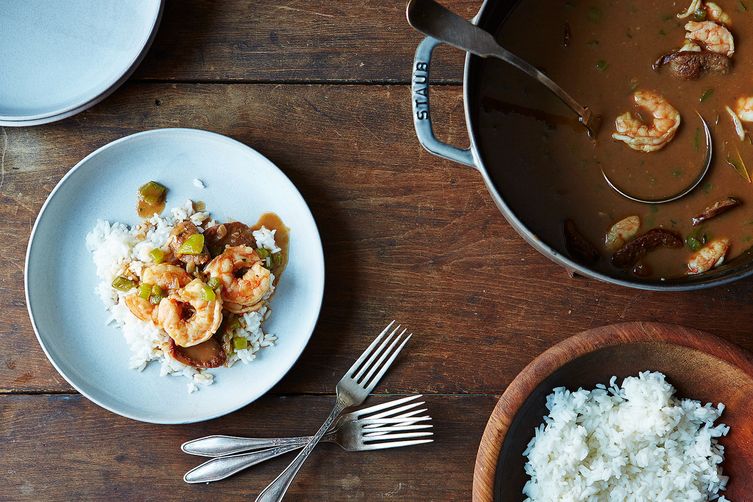 Granny Lee and Alton Brown's (pictured above) shrimp gumbos have something in common: a delicious roux.

My Great-Grandmother Lee may have passed away twenty years ago, but she is alive and well in the hearts and minds of her descendants. She was and is the definition of a matriarch—I say “is” because as far as her family is concerned, she still occupies that seat. As a mother of seven, she, along with my great-grandfather, raised her children in the countryside outside of Mobile, Alabama in a bare-bones log cabin. Living off my great-grandfather’s wages as a shoe salesman, the large family made do by growing their own vegetables, raising livestock, and fishing in nearby Mobile Bay. Granny Lee made her family know wealth through love—and her way of expressing love was through food.

More: How to make seafood chowder the right way.

As a young woman, Granny Lee got a job at Morrison’s Cafeteria in downtown Mobile, which, at the time, was one of the most popular restaurants in town. Morrison’s was pristine and elegant, with waiters in white jackets and an abundance of “Sunday dinner” foods. And while her own mother, "Big Mama"—my Great-Great Grandmother—had taught her how to make seafood gumbo, it was in the kitchen at Morrison's that she learned to perfect it, and the importance of a great roux.

After finishing her tasks at her station on the salad line, she would watch one of the older cooks in the soup station make dark, silky seafood gumbo, brimming with shrimp, crab, and oysters. I’m told one of the things that made Morrison’s so special was that when you were hired, you were hired to do one job—meaning you were hired because you made the best asparagus salad or macaroni and cheese or, in this case, gumbo. Over time, my great-grandmother learned the particularities of seafood gumbo from the expert, gradually perfecting gumbo in her own home. Eventually, whenever anyone who knew Julia Lee came into an abundance of seafood, they would willingly share it if she would make them gumbo. 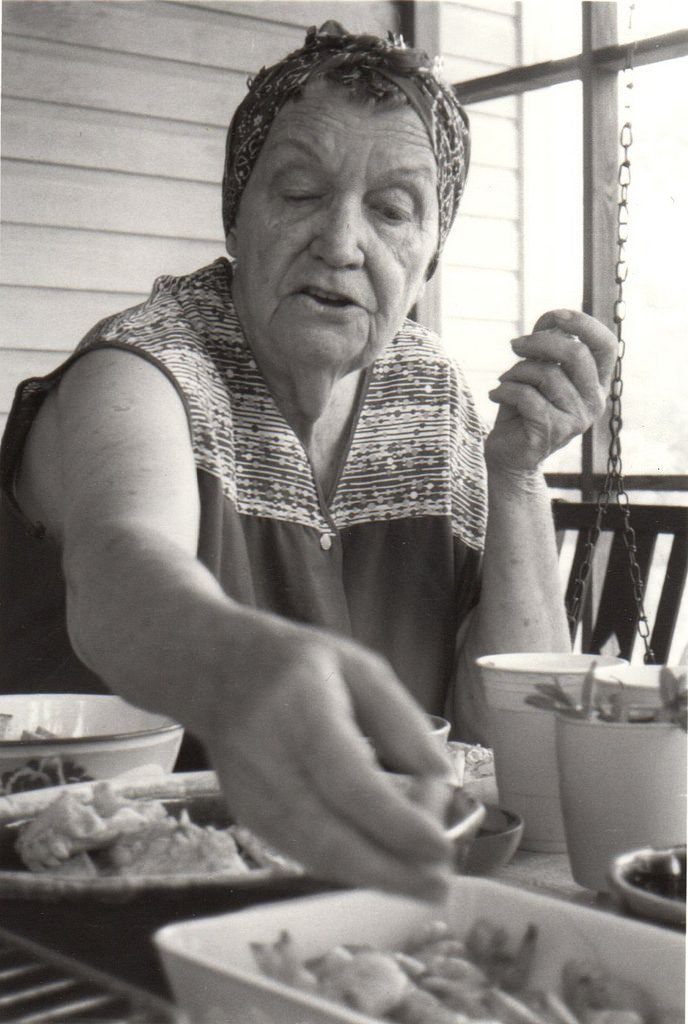 Over the years, gumbo became a special occasion dish for my mother’s side of the family, not only because it was difficult to acquire the seafood to fill a 20-quart gumbo pot, but also due to the time and expertise required to make gumbo well. Making gumbo became a rite of passage for the four Lee daughters as they married and set up their own homes. They would call Mama and have her teach them how to make the gumbo they grew up on, so that they, in turn, could share with their families the dish that symbolized wealth, celebration, and family. It became a sort of unspoken tradition for the Lee ladies—you got married, you cooked for your family, and you learned how to make gumbo from the Grande Dame herself. So, when it came time for my mother to learn, her training as a journalist (and perfectionist) compelled her to record her session with Granny Lee so that she could immortalize the woman and her gumbo.

Several years ago, I decided I wanted my mother to fix gumbo for my birthday. Out came the cassette tapes my mother had meticulously recorded. The only problem was, the tapes didn’t disclose exact measurements. How much flour went into the roux? How many cups of celery? Okra? My mother scrambled to collect recipes from each of her aunts, only to find that no two recipes were the same. All the women swore, “Well, that’s exactly how she made it.” My mother tried to cobble together all the recipes to make my birthday supper, which, for the record, was fantastic. She, however, proclaimed with defeat, “It’s not the same.” 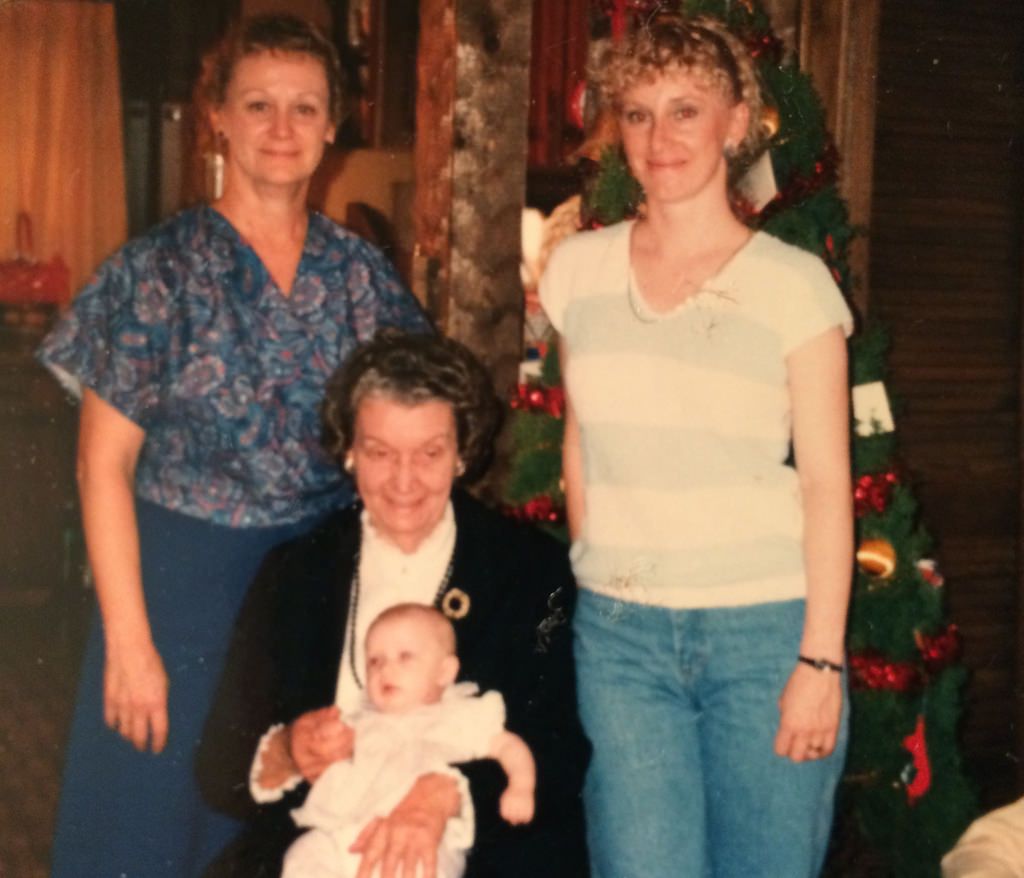 Over the past two years I’ve tried to figure out why my great-grandmother would give each of her daughters different recipes for her signature dish that was allegedly perfect every time she made it. It’s like my Nana—her eldest daughter—puts it: “Women in her generation kept secrets in their recipes to remain exclusive.” She didn’t mean to leave everyone scratching their heads, at least not her own daughters. She just knew that some days you might need more garlic than usual, while other days would call for more crab.

After becoming intimately acquainted with my great-grandmother's gumbo and many of its secrets, I’ve cobbled together the practices of five generations to create a master recipe. I don’t know if I even have it figured out, but I’ll give you my best attempt at my Granny Lee’s legendary seafood gumbo. Save a secret or two, of course.

SweetNovaRain January 15, 2017
I'm from Gulfport, MS too! My grandmother was the famous gumbo chef in the family. (I swear to you, it converted nonbelievers!) Now that she's gone, the only "recipe" we have is a bunch of pictures that I took right before she died, l trying to document the process. My mom, aunts, and I make an attempt every year for Christmas. It's good, but no, it's never the same.

Chef L. January 14, 2017
I love heirloom recipes and the stories that go with them. I was born and raised near Mobile (Gulfport, MS). This is very similar to my mother's recipe and I always proclaim, " just not the same". Thank you for sharing both the recipe and the memory!

Lauren September 4, 2015
I've never seen gumbo eaten from a plate... And my family has been in south Louisiana since the 1700s.