Today: There is a time and a place for seriously under-whipped whipped cream, and that time and place is called semifreddo. 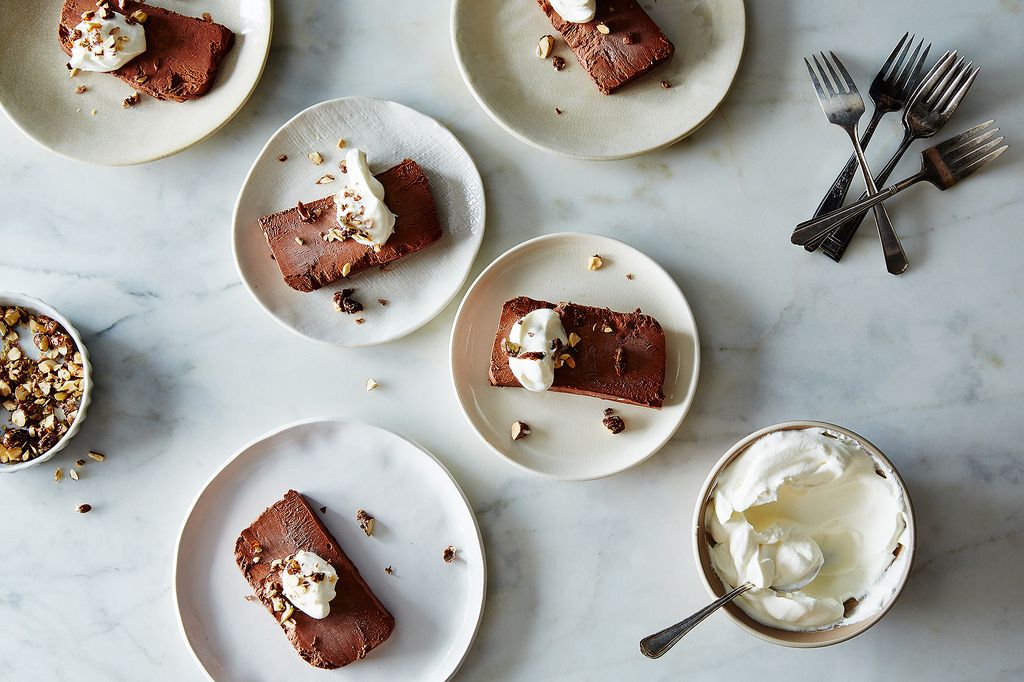 The word “semifreddo” is Italian for half frozen—which I suppose most dessert fans know by now. The dessert so named falls between ice cream and mousse: It starts with custard (crème anglaise), as does ice cream, but has whipped cream folded in, like mousse.

Instead of getting churned, the mixture is poured into a mold and frozen, then unmolded and sliced. This one is rich and chocolaty. Serve it simply with a spoonful of whipped cream, or gussy it up further with a sprinkling of chopped caramelized nuts or crushed toffee.

This recipe comes with a bonus lesson about texture that may be an “a-ha!” moment for some cooks because it also applies to other desserts (such as mousses or Bavarian creams) that involve folding whipped cream into another mixture. Following three seemingly odd instructions will ensure that your semifreddo and other whipped desserts are smooth and creamy instead of grainy: 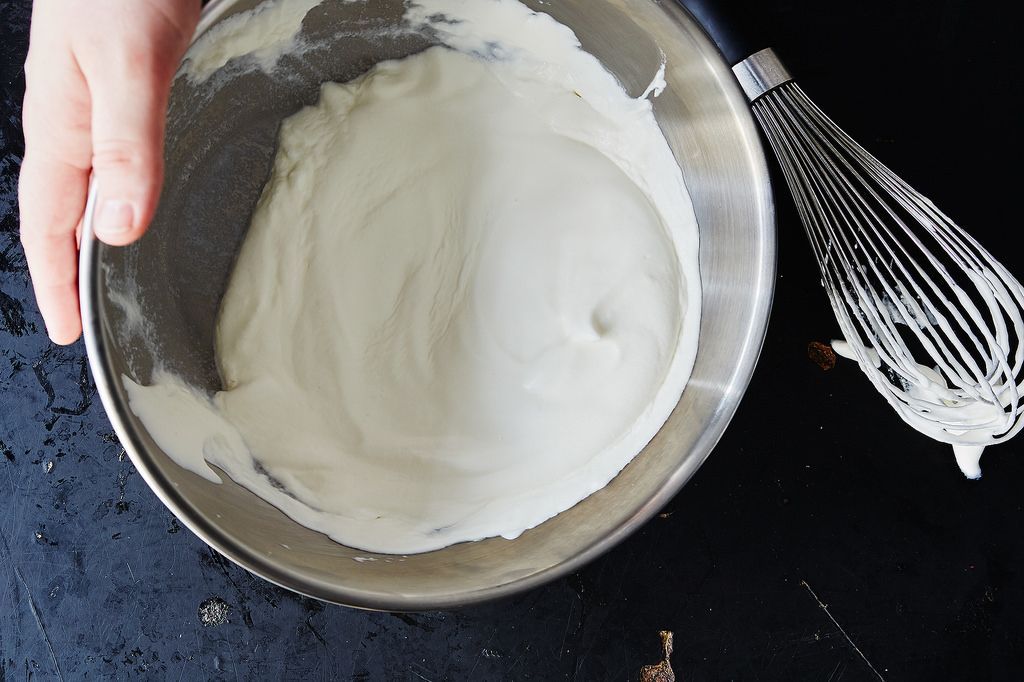 When you tilt a bowl of underwhipped cream, the cream should flow to one side—fluffy but still pourable and not at all stiff.

Why must you skimp on whipping, fold quickly, and rush to get it all into the mold?

Most people know that over-beating whipped cream can make it grainy (from tiny bits of butter). What most people don’t know is that folding whipped cream into another mixture has the same effect of extra beating. Even if you start with perfect whipped cream (by ordinary standards), by the time you’ve folded it into, let’s say, a lemon mousse, it may be over-whipped enough to make your mousse grainy once it’s chilled. Worse still, the stiffer the cream is to begin with, the harder it is to fold, the more you have to fold, the more over-whipped it gets…you get the picture. 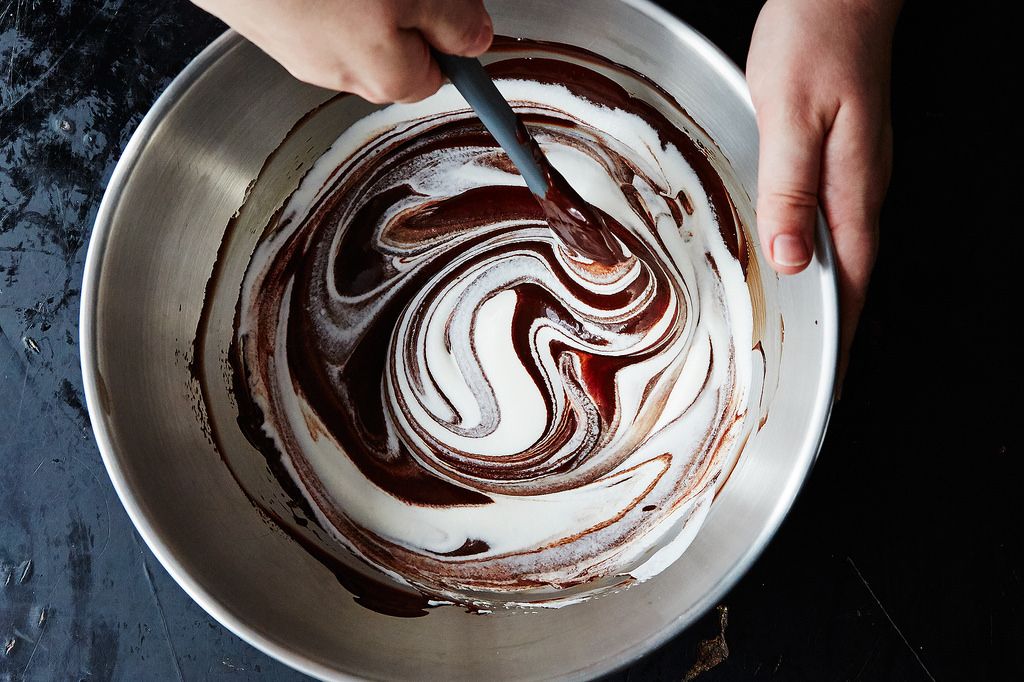 For all these reasons, whipped cream for folding should always be at least somewhat under-whipped. But, when chocolate is involved, “somewhat” under whipped is just not good enough!

When whipped cream must be folded into a rich chocolaty mixture, it should be seriously under-whipped. This is because the cold cream makes the chocolate mixture thicken very quickly, which makes the cream harder to fold in, which causes more folding, more over-whipping, and more thickening.

The whole mixture may actually start to set before you get it completely folded or into the mold. (Has anyone been there?) Once this happens, any further handling—including scraping the mixture into the mold—will further destroy the creamy texture and reduce the volume of the dessert, as well. Serious under-whipping makes it possible to fold in the cream more quickly and easily, which results in a cold or frozen dessert with a creamy smooth texture. 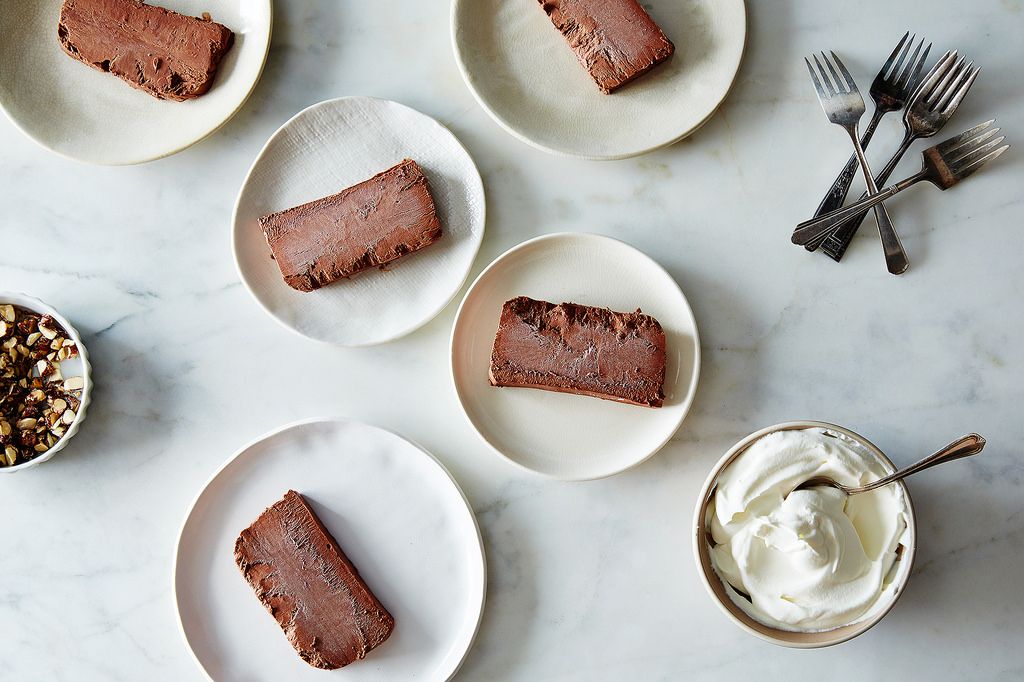 First and last photo by James Ransom; all others by Bobbi Lin