Meg Abbott and Issy Croker—the London-based writer and photographer duo who call themselves The Curious Pear—visit the home of food writer Mina Holland, who has traveled the world but spends most nights cooking at home. 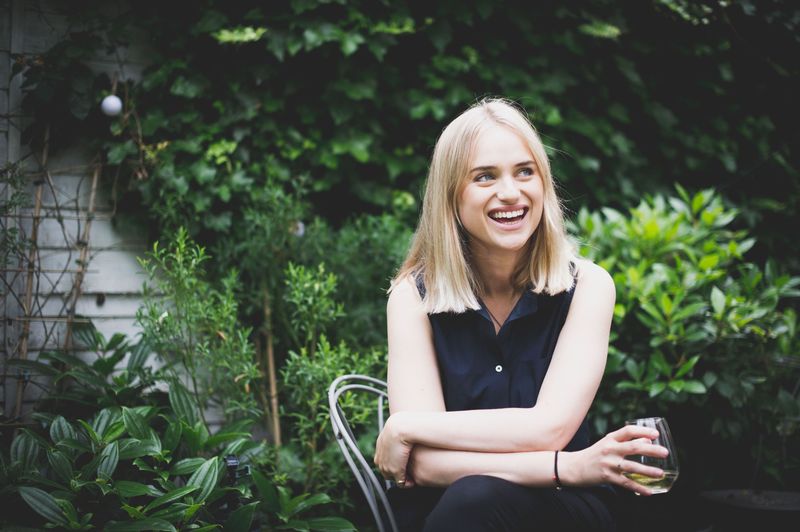 The very first time we met Mina Holland, editor of the Guardian’s Cook magazine and author of The World on a Plate, we ended up lingering outside the entrance to her favorite pub, waiting for the clock to strike 11:30 A.M. and summon the first cider of the day.

So it seemed only right to cement this tradition at our second meeting by sipping icy vermouth at midday in her West Hampstead garden.

Mina is an editor and a writer who, in her short but vibrant career, has reignited a public interest in food writing and the people behind our favorite dishes. But above all, she is a lover of cooking and eating. With food at the front of her mind, Mina has trailed the globe gathering pearls of culinary wisdom from all corners. This summer saw the release of her first book, The World on a Plate: 40 Cuisines, 100 Recipes, and the Stories Behind Them, in the U.S. Exploring eating traditions around the world, Mina has created a book that she says is “as comfortable in your kitchen as at your bedside.”

With recipes, stories, and history, The World on a Plate glides from the spice-infused Middle East to the fish-centric Japan to the family feasts of Mexico. It dips into Venice’s crumbling bars, lifts the lid on Ethiopia’s most beloved stews, and teaches us the formula for a “revelatory” tomato sauce. Her book has been internationally acclaimed, with twelve editions now available. For a recipe book with no pictures, that’s a huge credit to the beauty of Mina’s writing. “It’s just so nice that people want to use it as well as read it!” she says.

More: Here are 5 things Mina's book will teach you. 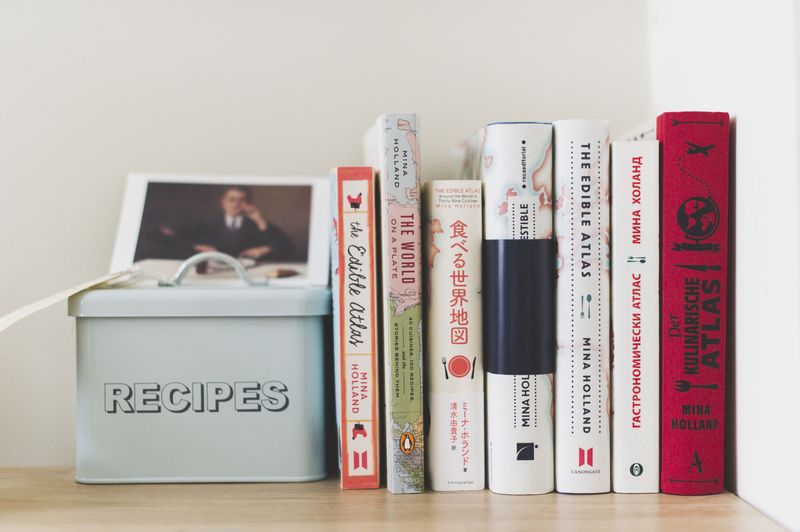 As we speak, Mina is working on her new book, Mama: The Food That Makes Us, which explores culinary inheritance and recipes passed down from mothers to children and how they are altered through time. On her wooden desk sits a little tin box, a gift from her own mother. “Mum gave me this for my thirtieth birthday, filled with recipes I grew up with.” She tells us, unlatching the box and sifting through the labeled cards.

Mina has lived in West Hampstead with her musician boyfriend for six months. Theirs is a quiet, leafy pocket of north London, where the kitchen is the nucleus of the home. “My whole life, I’ve done my socializing in the kitchen,” she explains, refilling our cups with tea. “I don’t ever want a kitchen that’s separate from the living space. I hate the notion of having to scurry away and busy myself in a tiny kitchen while all the action happens elsewhere.” 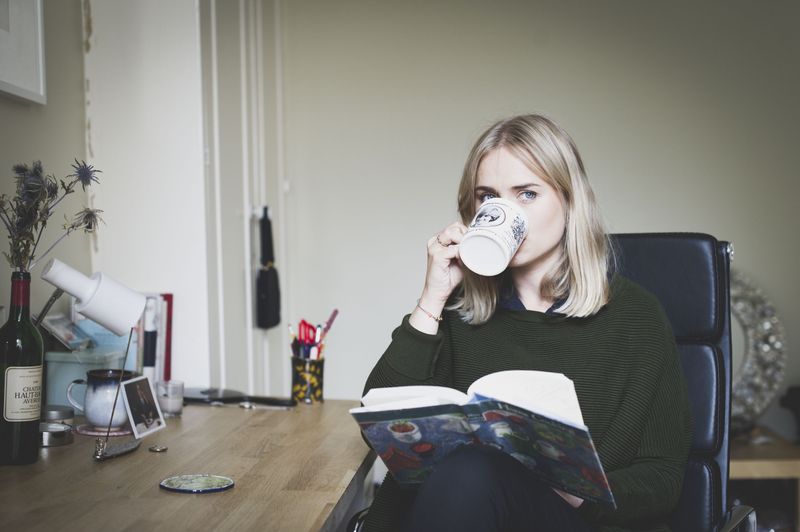 And it’s true: In our afternoon with Mina, we barely leave the kitchen. Once, we scurry up to her airy writing room, with its lavender window boxes and views over the garden. We also head outside for a while to pick her herbs: sage, bay, thyme, and mint swaying beside giant hydrangeas.

But for the most part, we stick to the kitchen, where Mina cooks up two of her favorite home recipes. The first is baked eggs with cinnamon, sage, and arugula. “This is my very inauthentic take on Israeli shakshuka.” We scoop up the gently spiced sauce with hunks of crusty bread, the sauce still bubbling away. She always prefers cooking for her friends to going out. “I think I’ve realized as I’ve gotten older that I like the simple things in life,” Mina says. “And that for me is cooking at home with a nice glass of wine, talking to the people I’m close to. I cook about four nights a week at home.” 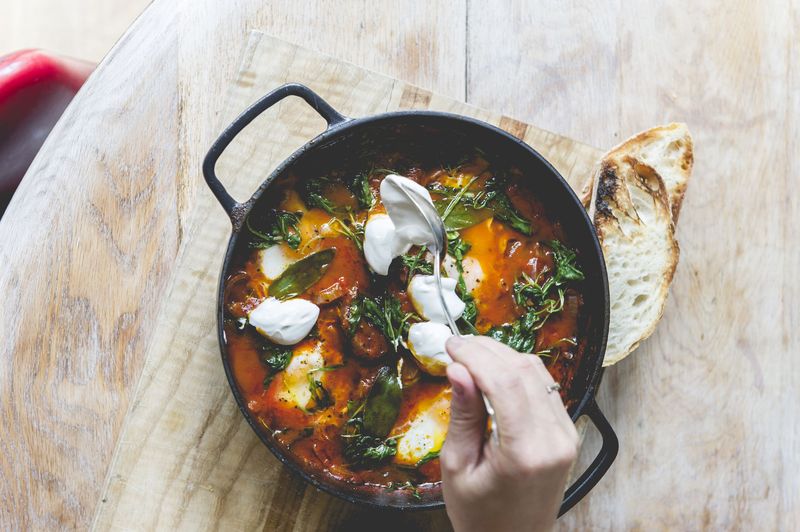 Unsurprisingly for one of the most rousing food writers around, Mina’s kitchen shelves are lined with books. The classic works of Laurie Colwin and M. F. K. Fisher are nuzzled beside many of the latest cookbooks, from Claire Ptak’s The Violet Bakery Cookbook to Rachel Roddy’s Five Quarters. “I don’t cook from recipes very much. But a good cookbook makes me want to,” Mina explains, pulling down this last one. “Everything Rachel cooks, I want to eat. Her recipes are un-daunting for a home cook, they always work, and she lures you in with artful storytelling.”

A lover of words, Mina collects cookbooks that read like novels. “The sign of a great cookbook for me is something I want to sit down and read, or take to bed. I’m always inspired when there’s a story behind a dish.” 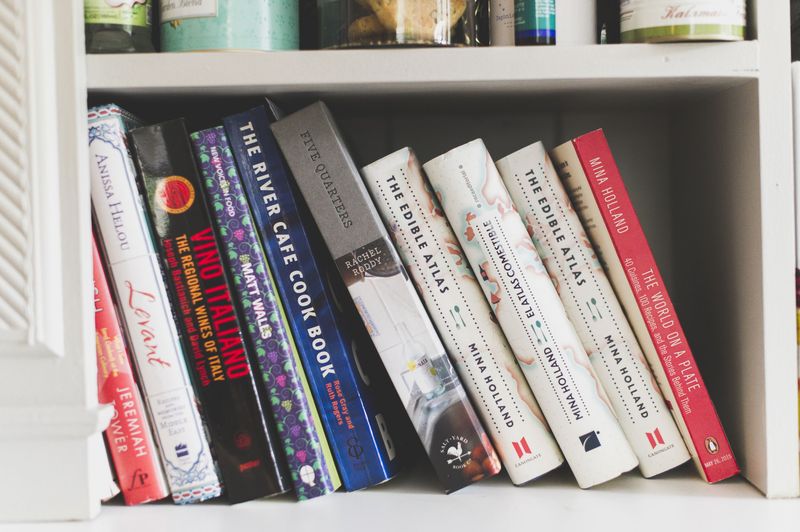 When we aren’t face down in our bowls, we spend most of the time at Mina Holland’s home exploring her well-stocked cupboards. All signs point to a comfortable cook and a vessel enthusiast. A turquoise Le Creuset casserole, a newly-acquired sauté pan from Crane cookware, many ceramics (among them bowls by the North Street Potters), salad servers by a young ceramicist called Daisy Cooper, and stacks of plates from Madrid’s Rastro market. Not to mention a sturdy Charles and Diana mug that she’s had since university.

“I’m not so much into kitchen gadgets as just good-quality, long-lasting stuff. A good sauté pan is important, and I love a big pot to throw everything in to. I like basic kitchenware that’s going to last forever,” like her British-made Blok knives and a fine I.O Shen Japanese chef’s knife. There is also Cuisinart mini food processor, which she calls her “favorite, and perhaps only, kitchen gadget.” 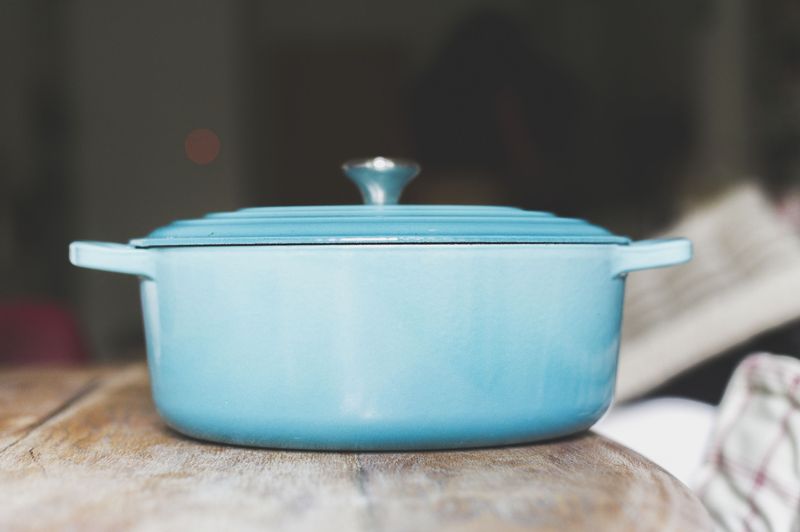 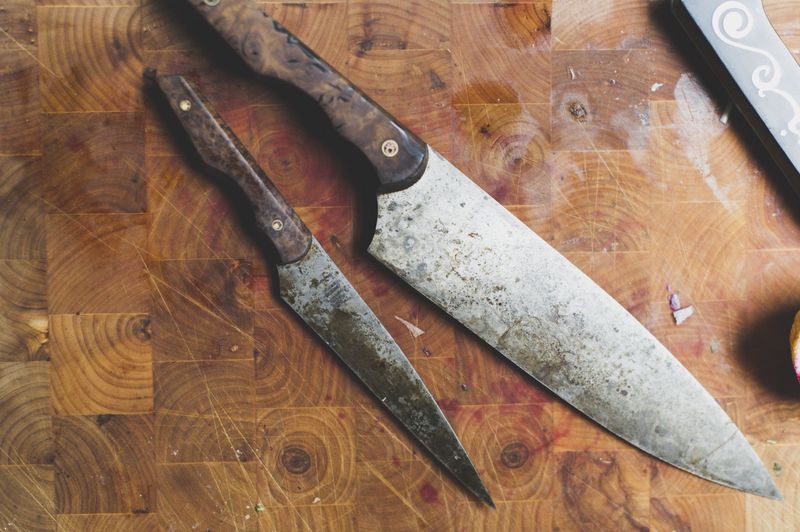 Beside all of this are shelves stacked with jars and bottles—the building blocks to her cooking. In 2009, Mina moved to her “beloved” Madrid, where she spent six months learning kitchen tricks from the locals. “I cooked a lot in Spain. I learned everything there from eating out and then trying to emulate it at home. I ate so many lentils and chickpeas, stewed slowly with Spanish onions, garlic, and this stuff,” she says, producing a small red tin of piménton (paprika). “I use it so much now. It’s one of my kitchen essentials!”

And what does she think is essential to a British cook’s cupboard? “Marmite is obviously an essential for any self-respecting Brit.” She says, “I not only love it on toast (morning, afternoon, and evening…), but it has that beautiful salty umami quality that is great with spaghetti, butter, Parmesan, and pepper.” Also, golden syrup. She admits to being able to live without it, but she enjoys it in moderation for its quintessentially British, cloying, and utterly moreish sweetness. 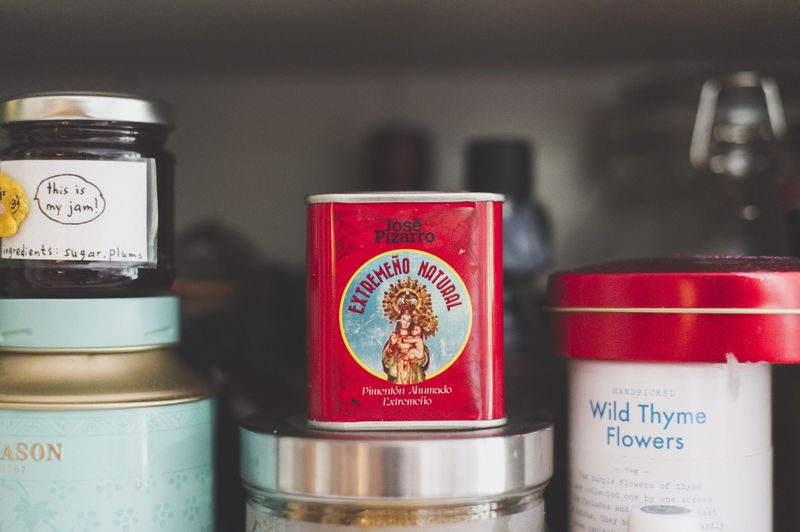 She takes us over to another bursting cupboard. “I suppose my other essential ingredient, for when I want something more neutral than olive oil, would be rapeseed oil, which is great at carrying other flavors or letting the ingredients you use it with sing louder. Rape grows in early summer in Norfolk, where my family is from. The fields glow this shocking yellow color.” The ingredients that she returns to time and again are those she grew up eating, that transport her back to her home kitchen. Fresh mint, used to infuse a pan of boiling new potatoes is one; smoked haddock another. She adds, “It reminds me of my Granny cooking it in milk before adding to a kedgeree. That’s the closest it comes to edible home for me."

After another cup of tea or two later, Mina pulls dessert out of the oven. It is cherries, thyme, and coconut, wrapped up in piping hot puff pastry and served with a dollop of yogurt, a take on the “plum shuttle” that she grew up eating. The cherries are hot and sweet, made zingy with a little lemon juice, the pastry is dense and honeyed, and the thyme gives it an autumnal kick. We demolish the whole thing in minutes. “This is a bit of an experiment. It feeds in to what the new book is about—playing with recipes that have been passed down to you,” Mina says, “vetting” the pastry before we’re allowed to taste it. In the first book, “I tried to encourage people not to follow recipes word for word. For me, food is about what you can bring to ingredients, not just mimicking what’s been done before. If someone has a really great idea that I can take inspiration from and build on, then that’s a lot more exciting to me. The process is therapeutic.” 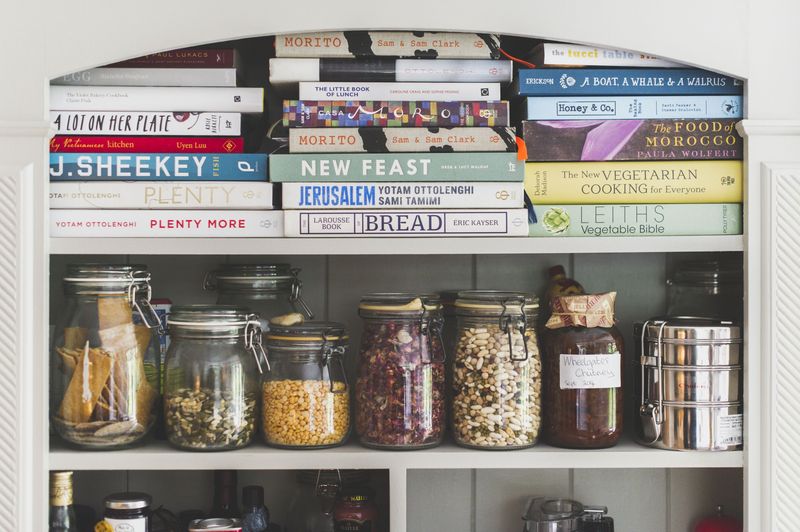 After dabbing up the last of the cherry juice, we head outside for our late-morning tipple. Mina is, of course, as well versed in wine as she is in food. “I learned about wine the same way I learned about food—experience!” As easy as it would be to spend the entire day tumbling from garden to kitchen and plate to glass, Mina finally has to turn to the day’s work—setting up a shoot for "Cook Residency," a column that features food professionals and their signature dishes. “The more people I meet through what I do, the more I learn, which makes me want to cook more than ever.”

“I don’t think you’re born a good cook, it’s definitely something you have to practice your way to. You have to eat a lot and cook a lot. In a sense it comes down to understanding yourself.” 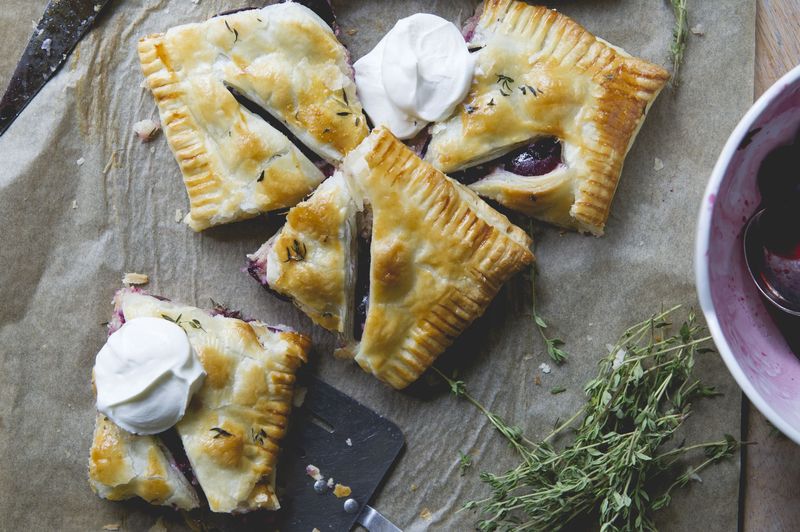 For the coconut frangipane:

Christine September 23, 2015
Eh, disregard my comment. I must be slow today!