Where Does Alcohol Come From, Anyway?

Spirits don't grow on trees—they're made in a distillery!

Today, Emily Vikre, who left her job to start her own distillery with her husbund, walks us through the process—from fermentation to distillation—and gets to the heart (and the heads and the tails) of the drinks we love. 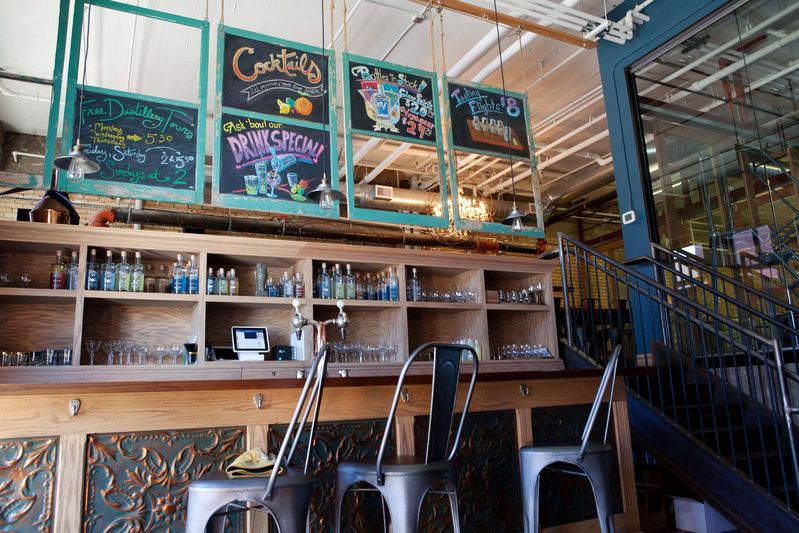 I have spent the last three (wow three! That flew by. I’m beginning to suspect I’m old.) years on this lovely site writing about breakfast. And I do eat breakfast, every day. I look forward to breakfast every day. But, truth be told, the majority of my focus is not on breakfast. Hard to believe, but true.

You see, two years ago my husband and I started a craft distillery in a small town in northern Minnesota, so I actually spend the majority of my time thinking about things like gin botanicals, labeling laws, and barrel sourcing, which, if not the farthest possible thing from breakfast, is definitely not an adjacent thing either. 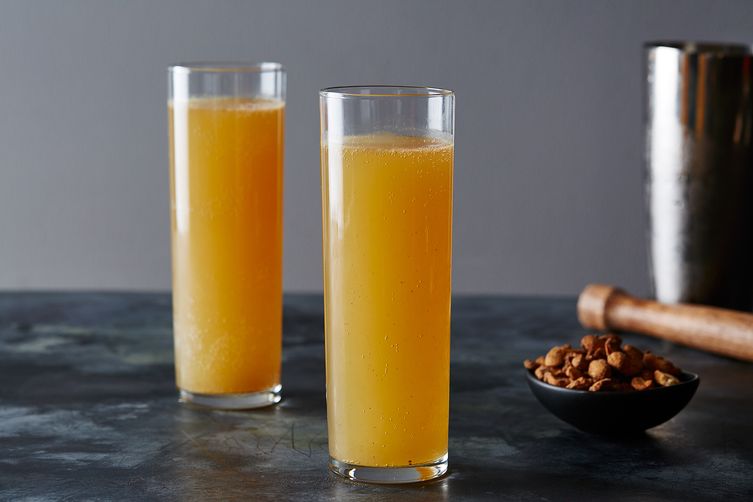 My background is in nutrition and my husband’s is in global public health, so when asked to give an explanation for how, two and a half years ago, we up and decided to leave our jobs, move away from the East Coast to the Midwest, and start a distillery, I am required to resort to a certain amount of mysticism and magical thinking. (And, if you find that intriguing, you can read more about it here.) When I think really hard about it, I remember that I had spent some years taking wine-tasting classes and home-brewing beer, so maybe I was subconsciously primed to move on to distilling; consciously, however, I sure didn’t feel that way.

But, ready or not, here I am. And the important thing, I think, is that I came into booze and continue in booze with a learner’s mind, trying to figure out all there is to know—what is interesting, what is useful, and what is superfluous in the world of wine, whiskey, beer, cocktails, and so on.

This learning process, a sort-of booze 101 if you will, is something I’m excited to share. Things like: What’s the difference between whiskey and Scotch and bourbon anyway? Not to mention what on earth is the difference between an E.P.A. and an I.P.A. or a stout and a porter or a pilsner and a lager? And can you really tell the difference between a Cabernet Sauvignon and a Merlot just by smelling and tasting it—really? Or can you still make respectable cocktails even if you’re not carving perfectly clear polar bear-shaped ice cubes from a giant ice block using a saw hammered by the same metal-smithing family that once made swords for samurais? (Spoiler alert: It’s dubious, but maybe, probably still possible). 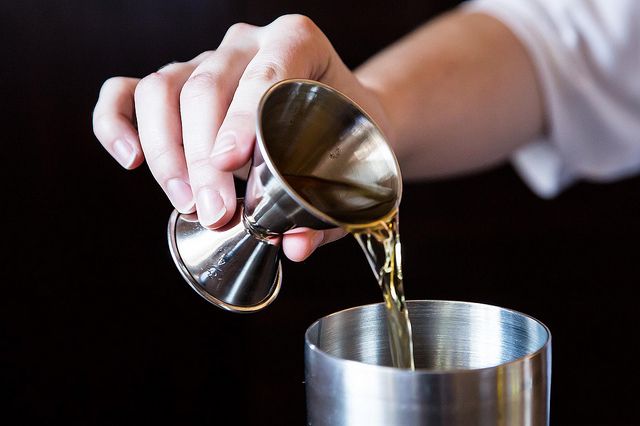 I thought I’d start by showing you, what the heck goes on in a distillery anyway. Welcome to my office!

So, for making any distilled spirit there are three most basic steps:

However, only some spirits are aged; as a general rule, brown spirits (like whiskey, brandy, and dark rum) have been aged, while clear spirits (like gin, vodka, eau de vie) have not. For unaged spirts, I guess you could say there are just two basic steps (if you don't count infusion). 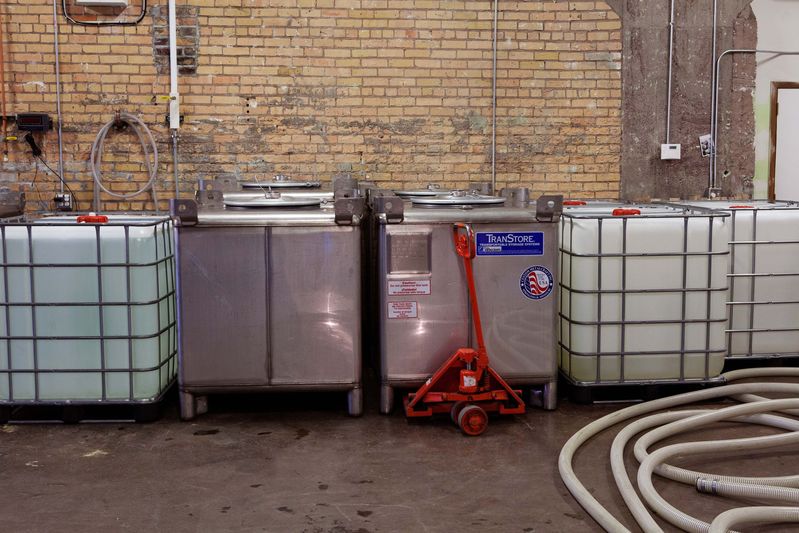 The first stage—fermentation—happens in the tanks.


In order to make the first step—fermentation—happen you need yeast and you need a source of sugar. The source of sugar is different for different spirits. For whiskey, for example, it's grain; for rum it's sugar or molasses; for brandy it's fruit; for tequila it's agave, and so on. You break your sugar source down by cooking it, mashing it, malting it, or adding enzymes, then you add yeast. As the yeast eats the sugar, it makes alcohol as a byproduct. The waste of yeast is truly a wonderful thing!

At the end of the fermentation process, you wind up with a soupy, still sweet, and generally pretty funky mixture that is, most typically, anywhere from around 8 to 15% alcohol depending on what sugar source you started with, the type of yeast you use, how hot the fermentation process gets, etc. This mixture then gets transferred from the tanks where it was fermenting (pictured above) into a still (pictured below). 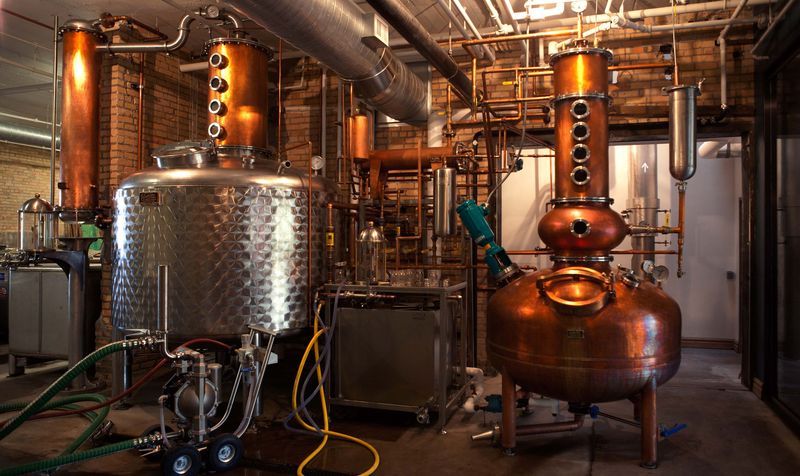 The second stage—distillation—takes place in the still. 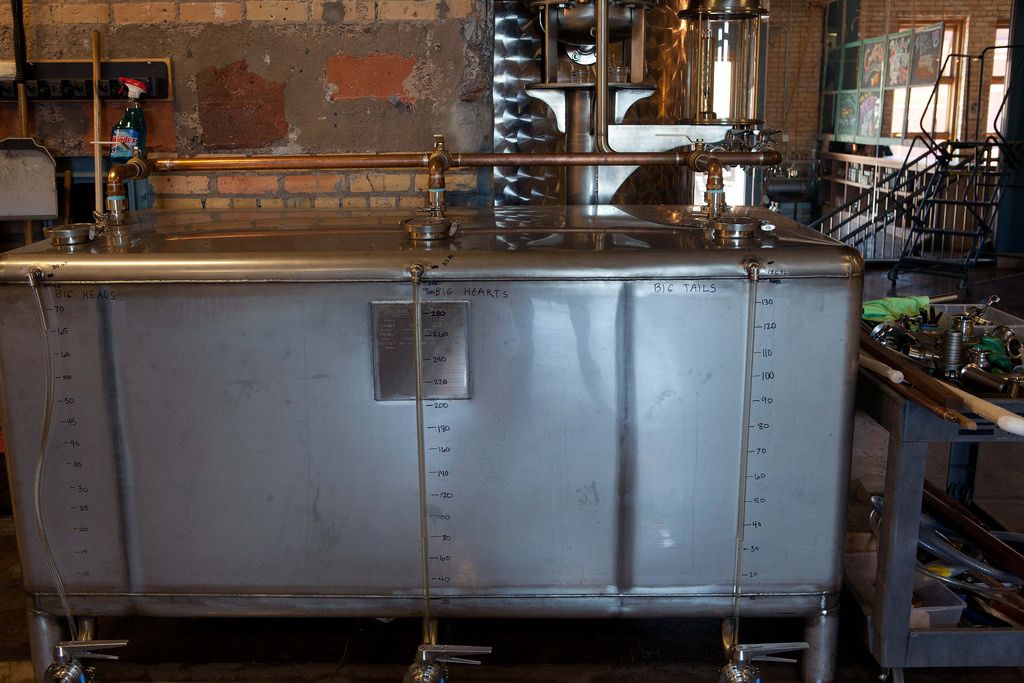 The collection tank is where the alcohol (and other stuff) that boils off during the distillation run gets collected.


The stuff that comes off first smells horrible and poisonous, like a combination of nail polish remover, floor varnish, and green apples. This is called the heads and it smells poisonous because it is poisonous. The heads are responsible for the stories of moonshiners going blind or dying after drinking their hooch. We discard the heads or sometimes use them as a solvent when we need to clean something impossibly sticky.

What boils off next we call the hearts, and this is where most of the ethanol—the alcohol we’re trying to get—lies. It smells, unsurprisingly, like alcohol.

Last comes the tails. Tails aren’t poisonous, but they’re full of heavier alcohols and oils that are stinky (a combination of barnyard, wet dog, and cardboard). If you’re making a spirit that is going to age for some time, you want some of the tails mixed in with your ethanol because over time, some of those heavier alcohols convert into another compound called esthers, and esthers contribute complexity to aged spirits. But, in clear, unaged spirits, you generally want to focus on collecting something close to pure ethanol, which you do by distilling your hearts multiple times, each time separating out more and more of the other compounds from the ethanol. 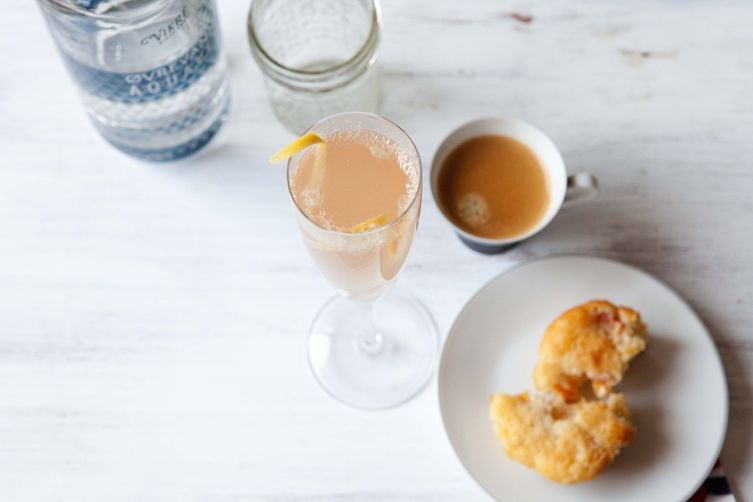 Sunrise Over the Fjord is an aquavit cocktail with grapefruit and sparkling wine.


My favorite spirits, and the ones that we are currently making (apart from whiskey that we are aging) are gin and aquavit. These are clear spirits that are infused with herbs and spices, which we refer to as botanicals (pictured below). To make these, we start by doing several rounds of distillation to get our base spirit really clean and neutral-flavored—as close as we can get it to pure ethanol. Then, we infuse.

For sturdier botanicals like juniper berries and cardamom, we put them directly in the bottom of the still and let the alcohol boil off around them. As the alcohol heats up to a boil, it becomes infused with the flavors of the botanicals. 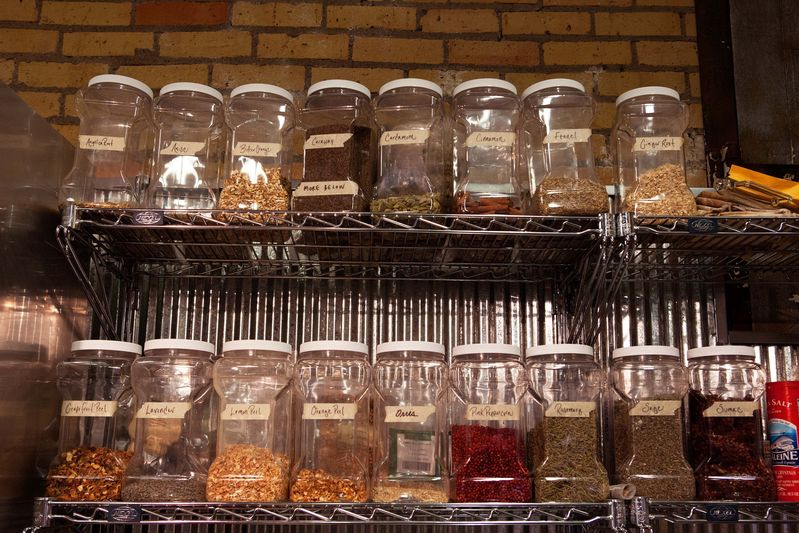 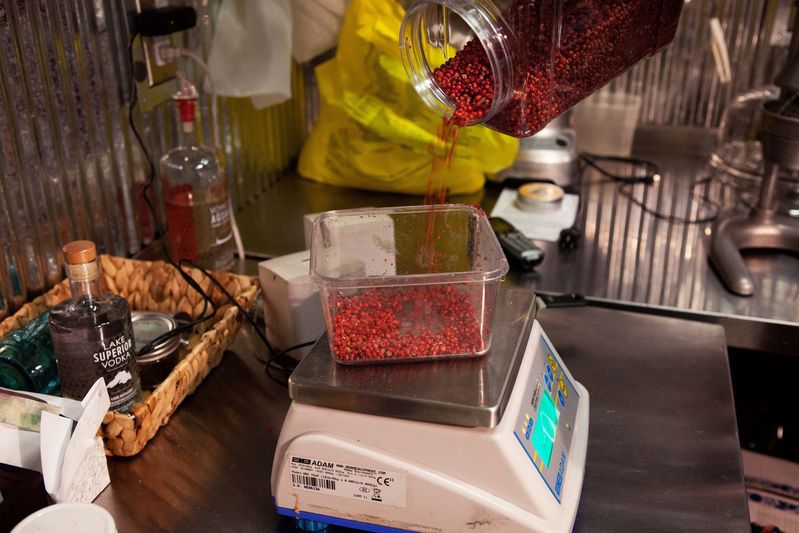 Here you see just some of the Vikre Distillery botanicals.


With more delicate herbs like lavender and citrus peels, we use a process called vapor infusion: We pack a perforated metal container—in essence a giant tea strainer—with these botanicals and we force the vapors through pipes and through the botanicals before condensing the vapors back into liquid. In the process of passing through the herbs, the vapors pick up the flavors.

The infusions, both the direct and the vapor infusing, take place on the final round of distillation. We've usually distilled the alcohol mixture 3 or 4 times already and before we do the final infusion distillation run.

At this point, we're ready to add purified water to the alcohol to bring it to the proof at which it will be sold. We bottle it, pack it into boxes, and ship it off. The whole process from fermentation to bottling takes about 1 to 2 weeks. 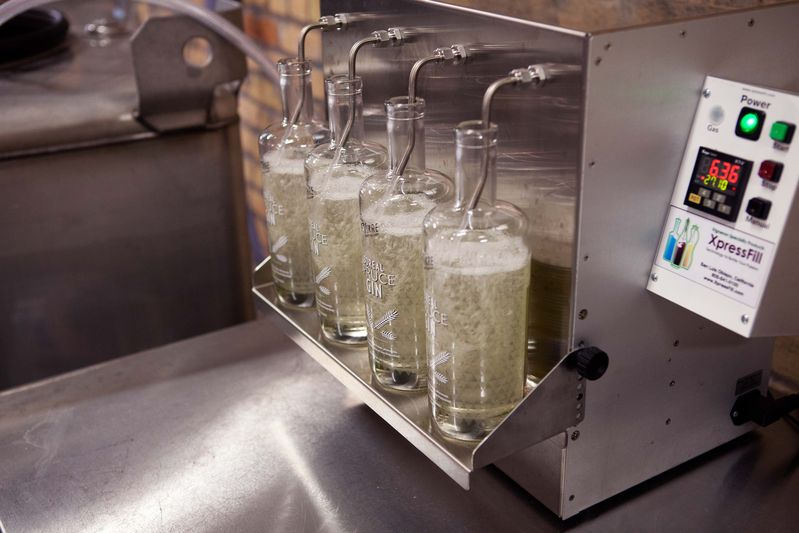 Spirits that we are going to age, on the other hand, get distilled only a couple times and then transferred into oak barrels (pictured below), which we store in a warehouse until we are ready to tap the barrels and bottle the spirit. This aging process could be 1 year, 3 years, 5 years, or even 18 years depending on what we’re making. 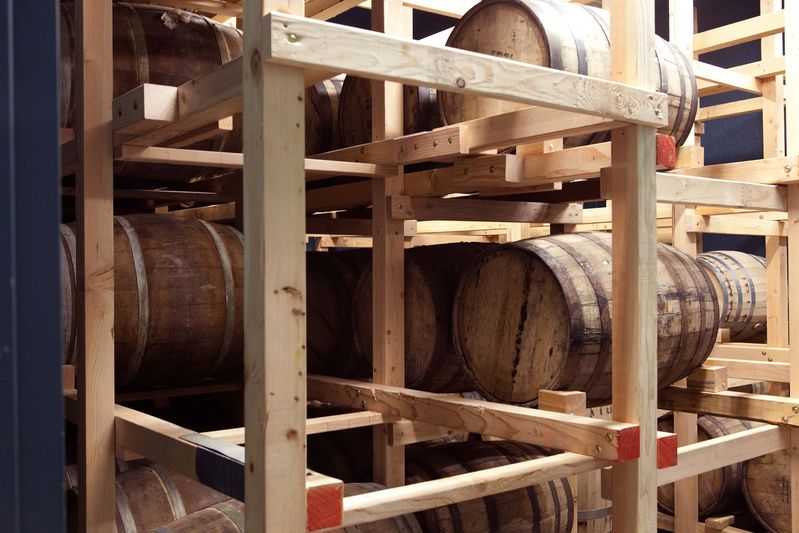 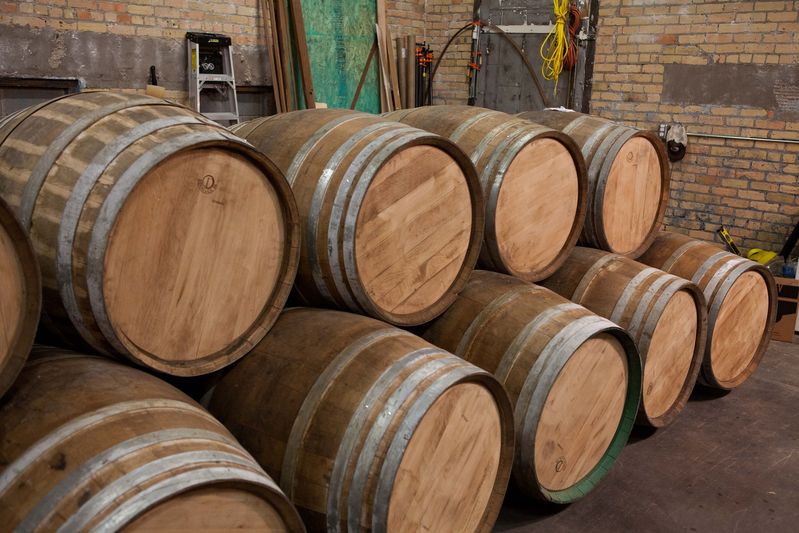 That's the quickest dirtiest version of how distilling works. Obviously when you get deeper into it, it gets more complicated and there are a lot more tubes, fork lifts, and intensive regulatory processes. But, you don’t need to know about those—I do. You can just raise a glass and feel good about the results of yeast, sugar, boiling points, and time. 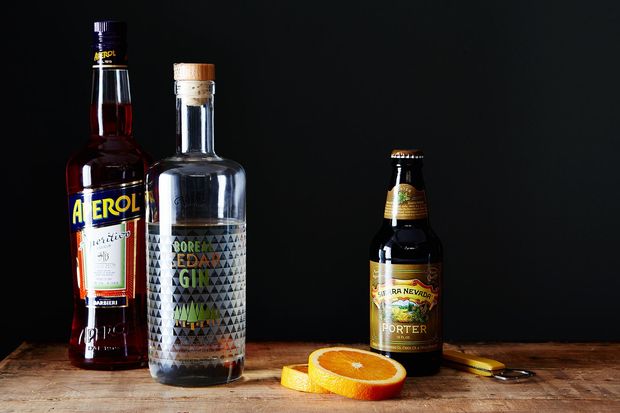 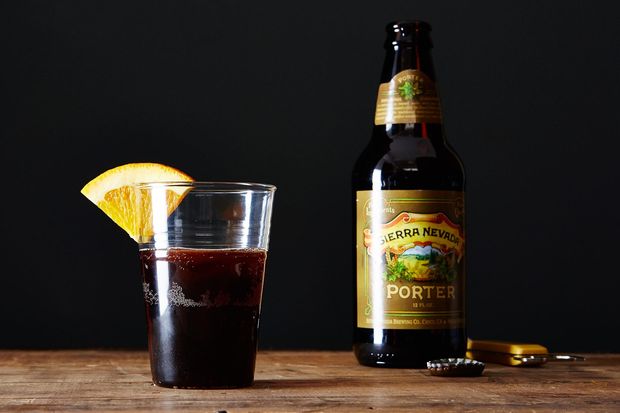 We made Darkness on the Edge of the Town with Vikre Distillery gin, aperol, and porter.

grandoldrobert October 1, 2019
In This Article: This chick's boyfriend is the one who really understands the process, she just manages the books, approves the cute labels and enjoys tasting the final products (and not the whiskeys).

Lasse L. September 2, 2015
I've just found this site and up pops your article.
The distillery name of Vikre rings true to a Norwegian like myself, and sure enough.... ;)

I'll follow you (from afar) and check out your recipes to see if there's new twists to the Scandinavian cooking I do myself.
And hopefully taste some of the distilled stuff one day too:

Gregg August 16, 2015
thank you for sharing I really enjoyed your journey, how can I found out more?

Kenzi W. August 13, 2015
The place looks beautiful! And I was captivated by your explanation of heads, hearts, and tails.
Author Comment

fiveandspice August 20, 2015
Sorry I never responded to this! Thank you so much Kenzi!! :)