The Search for the Perfect Roast Chicken Recipe

I feel about “perfect” roast chicken as I do about God: Everyone has a different way of getting there and I’m pretty sure that everyone is mostly right. Each of the kitchen masters who have taught me how to cook from the pages of their cookbooks has had a recipe that claimed perfection, and one chicken at a time, I’ve tried them all. 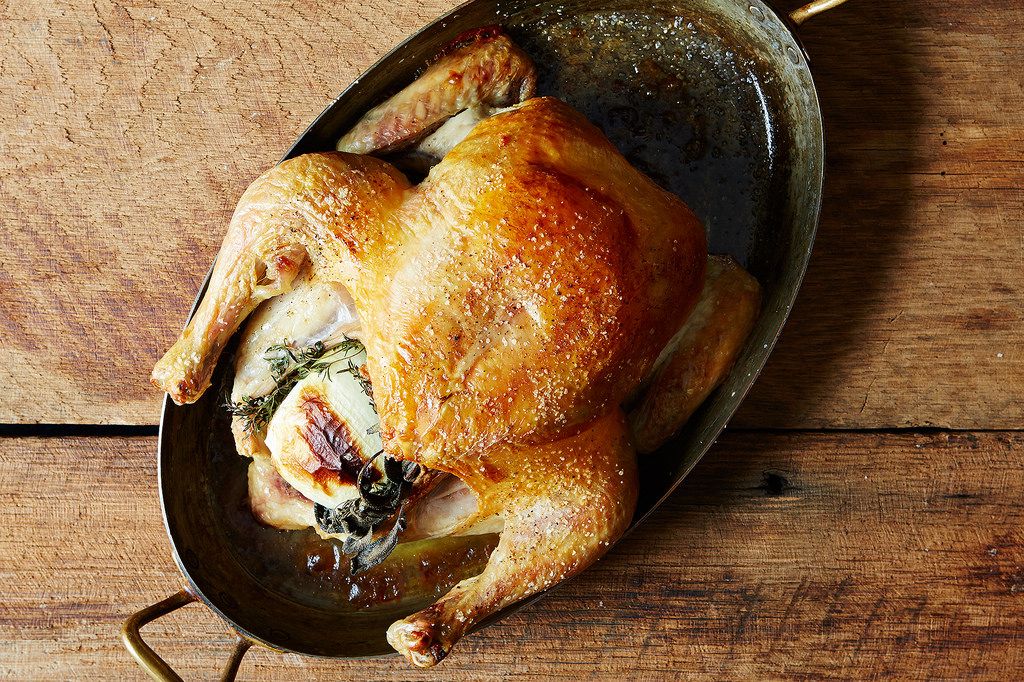 It began with Nigel Slater. A friend gave me his book Appetite, and the roast chicken was the first recipe I made. "Don't believe any of the smart-arse recipes you see for roast chicken," Nigel told me. "This is the one." He had me rub the whole bird with butter (no quantity included in the recipe, so I assumed it was lots), even putting "a walnut-size piece inside the bird." There was an entire head of garlic cut across its equator to make two flowers, and then there was the lemon—one half in the pan with the garlic and the other shoved into the cavity of the bird. I'd been raised by vegetarians, so going wrist deep and running my hand over the boney insides felt new and thrilling and a little bit wrong. Then the whole pan went into a hot oven, and I was to baste it or not—Nigel didn't really care. The end result was crispy and juicy and of course, perfect. 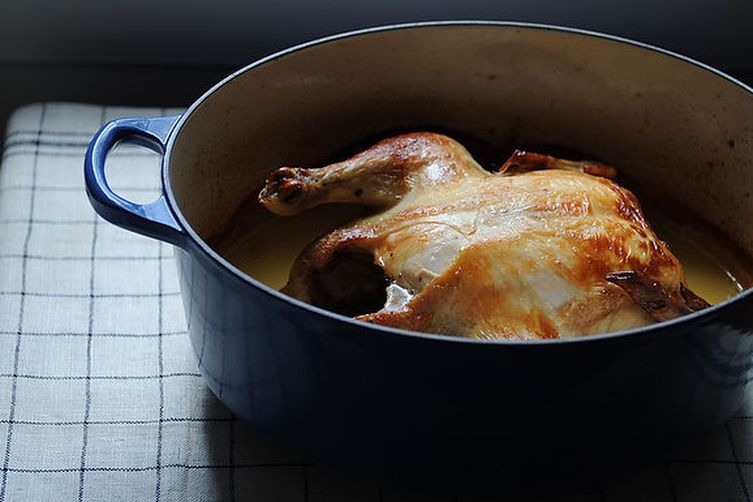 But then there was Laurie Colwin. "As you approach your bird," she warned "you will realize that there is controversy on the subject of roasting time." There was a little paprika on the skin—lemon, garlic, and, if you're feeling fancy, grapes inside the cavity—and three hours in a 250° F oven. I was to baste this chicken "constantly" which was impossible, but I wouldn't want to disappoint Laurie, so there was a whole afternoon of opening the oven, deeply inhaling, and spooning juices over the bird. The paprika made the skin a deep smoky red, and the meat was so tender it nearly dissolved. To this day I've never met a Laurie Colwin recipe I didn't love, and her chicken is, in fact, perfect. 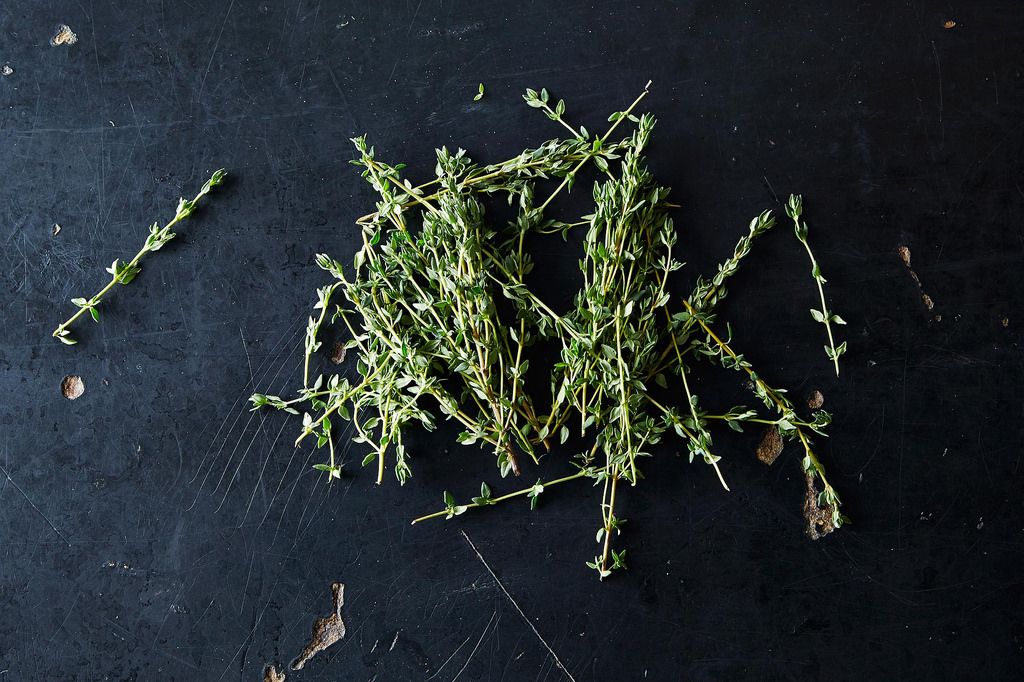 Oh, but who can say no to Ina? The collared shirt, the reassuring tone, the casual elegance! Her bird sat on a throne of roast vegetables and demanded both an exact and exorbitant amount of thyme (1 bunch plus 20 sprigs). I had no kitchen twine for the mandating trussing but used something from my kids' art supply drawer, string that smoked and crackled in the 425° F oven. Still? Delicious.

Judy Rodgers' roast chicken was one of those recipes that passed through the internet like a wave at a hockey game. I resisted. I didn't want to loosen the skin and salt and herb several days before roasting. I couldn't think about anything that far in advance. I knew my kitchen would fill with smoke as it roasted that bird at 475° F, and I already knew how to make perfect roast chicken.

My friend Andrew worked at Zuni Café for years. The night he cooked for me there, he sped around the open kitchen, making sure he laid eyes on each dish that came to me. He was manning the brick oven that roasted the chickens, and I sat at the table just beyond the oven, close enough to watch the dry and salted skin of each little bird turn gold each and every time. And the chicken that he brought to my table was... well, as Deb Perelman put it, Zuni Café chicken is "something of a religion for people." If chicken and God were to align together in some way, I think it would be on that plate at Zuni, and in the marriage between the skin, the meat, and the vinegary tang of the bread salad.

So I made it. I planned days in advance, I used a tiny bird (three pounds is the maximum, as any larger will cook unevenly), and I sizzled that chicken in my cast iron skillet. It was almost as good as the bird Andrew had made for me. Almost. 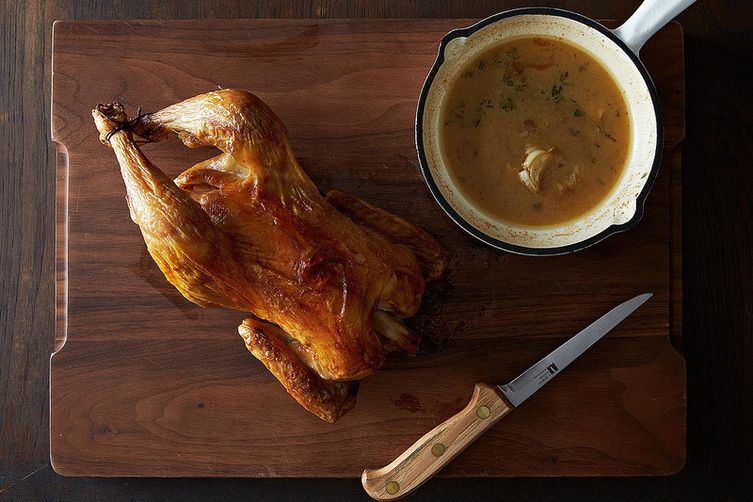 There was something in Thomas Keller's tone that finally inspired me to buy a roll of kitchen twine. His recipe (no butter, hot oven, butter on the meat after cooking) was a variation on those I'd made before, but he seemed to feel strongly about binding up those legs. It appealed to my inner girl scout, although the legs kept slipping out of their knots. Still I prepped a la Keller, doing my best to "rain salt over the bird." The chicken was as good as any other, and, true to Keller's instruction and that moment from the movie Amelie, I ate one oyster from the backbone and gave the other to my daughter. 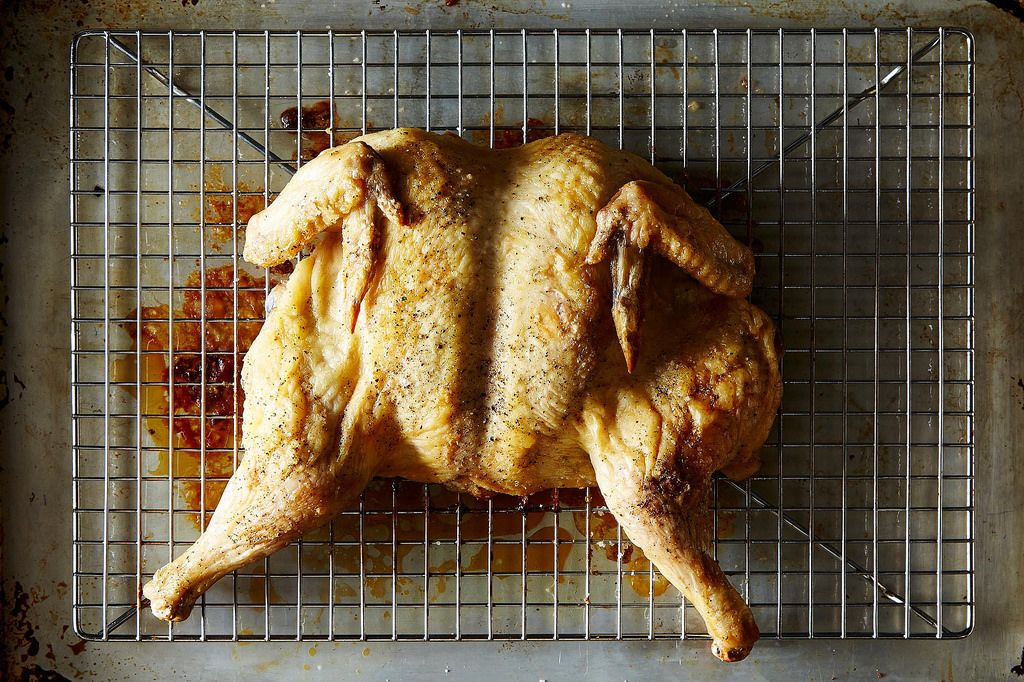 Of course it didn't stop there. There was the spatchcocking, which of course I had to do just to use the word. There was a brief moment where I considered the Modernist Cuisine at Home method, but the thought of injecting brine into the chicken (not to mention the blanching, the patting, the waiting, the resting, the flipping) made me tired before I even began. If you try that one, tell me how it goes. But for the most part, each "Perfect Roast Chicken" recipe has seduced me and I find that each chicken really is wonderful. There are minutely varying degrees of dryness, varying tastes depending on the source or happiness-while-living of my chicken. But really, roast chicken is perfect. And even if it’s not, there’s nothing that a little extra gravy won’t fix.

More: Or, make it without a recipe. 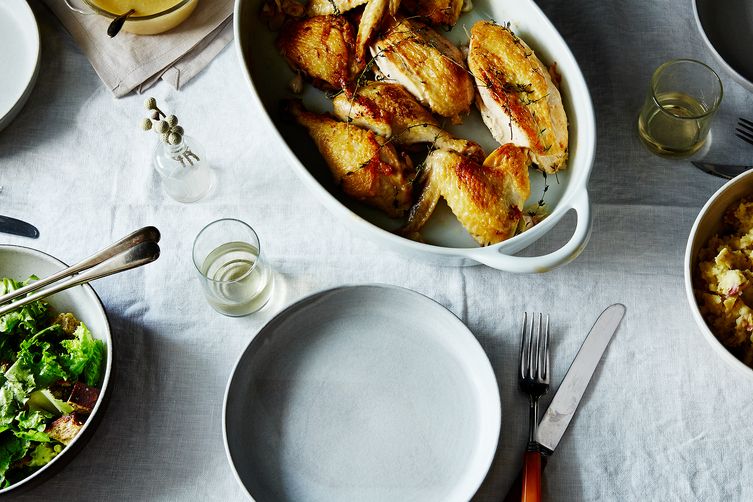 We know you have one; what's your favorite roast chicken recipe?

eatingfromthegroundup.com
Alana Chernila writes, cooks, sells fresh vegetables, teaches cooking and cheesemaking, and blogs at EatingFromTheGroundUp.com. She is the author of two books, The Homemade Pantry:101 Foods You Can Stop Buying and Start Making, and The Homemade Kitchen: Recipes for Cooking with Pleasure. She lives with her husband and daughters in western Massachusetts.

Westcoasty March 12, 2017
My favourite recipe so far is to stuff the cavity with fresh herbs (sage, thyme, rosemary), then pour a couple of glugs of Madeira over the bird, followed by the juice of a fresh-squeezed lemon. The chicken is then sprinkled with sea salt before roasting at 375 in a covered roasting pan. You can put halved fresh mushrooms in the pan while cooking to soak up the heavenly pan juices, or make rice to pour them over.

RandR November 1, 2015
Air drying the chicken and then slightly brown the skin with a propane torch oil or butter the skin for perfect skin salt before roasting at 450 about 1hour take it out of the oven to rest when instant read temp is 140 F herb or spice of your choice in summer indirect heat on the grill covered is a good variation

Sdonk October 21, 2015
Nice post, I admire your dedication in trying several recipes.
Heston Blumenthal's perfect roast chicken is the recipe I use when I remember to start the day before. The chicken is brined overnight and then roasted in a mild oven until cooked (takes about 4 hours) and then blasted into a hot oven to get a crispy skin.
I'm also tempted to try the ChefSteps method (https://www.chefsteps.com/activities/ultimate-roast-chicken), but I can't hang a whole chicken either in the fridge nor in the oven so I need to get creative.

Humphrey P. October 14, 2015
Following up on my comment below, just wish to note that this recipe has never failed - the chicken is invariably moist, it cooks in an hour and 10 minutes or less (if the bird is less than 4 pds), and there is only 1 small pan to clean.

Humphrey P. October 14, 2015
The best and easiest is the aptly titled "Naked Road Chicken" by the four-time James Beard winner Rozanne Gold. The recipe was published in the weekend edition of the WSJ, November 12-13, 2011. The chicken goes superbly with Gourmet's recipe for Black Peppercorn-Maple Sauce published in the second Gourmet Cookbook edited by the esteemed Ruth Reichl.

Nancy October 14, 2015
Loved your opening paragraph (and open mind about other recipes). To add one more to the mix, Michael Ruhlman recipe from Ruhlman's Twenty:
Seriouseats.com/recipes/2011/09/perfect-roasted-chicken-recipe.html

702551 October 13, 2015
It's worth pointing out that shortly before her untimely passing, Judy Rodgers did not cook her birds in the manner described in her cookbook.

She backed off a lot on the salt (not just poultry, but almost everything). I chatted with her at Zuni a few years before she died, and clearly she had mellowed on her salt stance.

Part of the brilliance of the Zuni roast chicken is the wood-fired oven which draws air past the bird (convection cooking), something that the average home cook cannot duplicate with their ovens. If you are a skilled grillmaster, you can accomplish this on your grill (with a closed hood).

soupcon October 13, 2015
My perfect roast chicken starts the night before. It is "the Judy Bird" recipe but I have found you do not need to measure exactly the salt per 5 lbs of bird weight as in the recipe. I generously salt the chicken with diamond kosher coarse salt and let it sit overnight in the fridge uncovered on a rack and the next day before roasting I bring it up to room temperature if I remember before roasting in a hot oven on a rack in the roasting pan until a thermometer stuck into the space between the breast and the thigh registers 165*F. I don't stuff or truss the bird but do salt the cavity. Sometimes I skip the overnight in the fridge bit and just salt the bird an hour or two before roasting. Overnight in the fridge uncovered dries out the skin and the result the next day is the most crispy addictive chicken skin you have ever had.

Amy October 13, 2015
My favorite way to roast a bird and now pork is as well is to dry brine. It's so delicious with little prep. Rub salt all over, leaving it uncovered in your fridge overnight. Roast the next day at 375 degrees Fahrenheit.

Ben October 13, 2015
Surprisingly, my favorite 'recipe' is 350 F with a plain chicken on an elevated rack. No salt, oil, butter, or anything else. Then I serve it with a side homemade dipping sauce and a salt grinder. It produces the juiciest chicken with perfect skin.

Allyn October 13, 2015
In our house we've tried countless versions of roast chicken and at this point, my husband usually tweaks a basic version with whatever flavors we're in the mood for and it turns out beautifully. However, he recently made Ina's Engagement Roast Chicken (http://www.foodnetwork.com/recipes/ina-garten/engagement-roast-chicken-recipe.html?oc=PTNR-joy_the_baker-pubexchange_article), and it might be my new favorite. I especially love the lemony gravy that it produces over rice and vegetables on the side. So dang good

ChefJune October 13, 2015
Well, Alana, here's another one for you to try. It's posted here on Food52, and it's also in MY cookbook, "Feastivals Cooks at Home." It's the recipe I make "without a recipe," and quite a large number of folks say its the best they've ever made, as well. :) https://food52.com/recipes/3401-perfect-roast-chicken Let me know what you think.