Alex Stupak Told Me to Make My Own Tortillas, So I Did

Forget what your kindergarten teacher told: It's not what's inside that counts. At least not when it comes to tacos.

According to Alex Stupak, who just wrote a book on the subject, the difference between a great taco and a crappy one comes down to the tortilla. 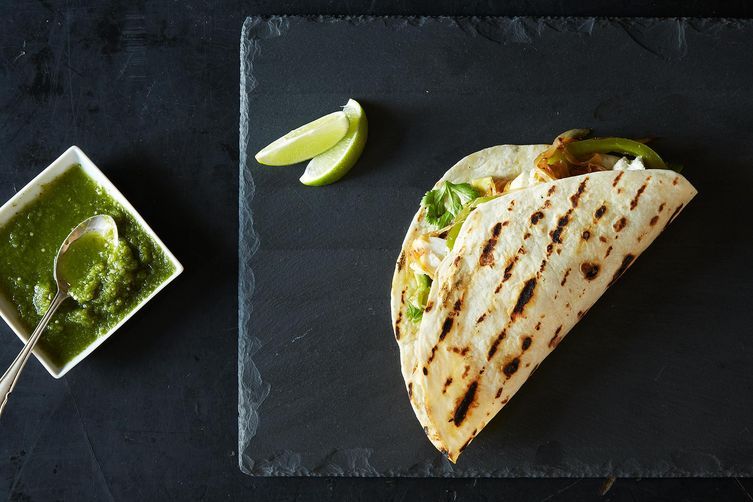 Stupak defines a taco as "a tortilla with a product on it that you want to eat and the appropriate dressing or accoutrement." The tortilla, be it flour or corn, is the taco's foundation, and its quality is essential. Just as some Japanese sushi chefs argue that sushi is 90% about the rice, Stupak claims that tacos are about the tortillas.

And that explains why the cover of his book on tacos is a strikingly bare tortilla, nothing to cover it up in sight. 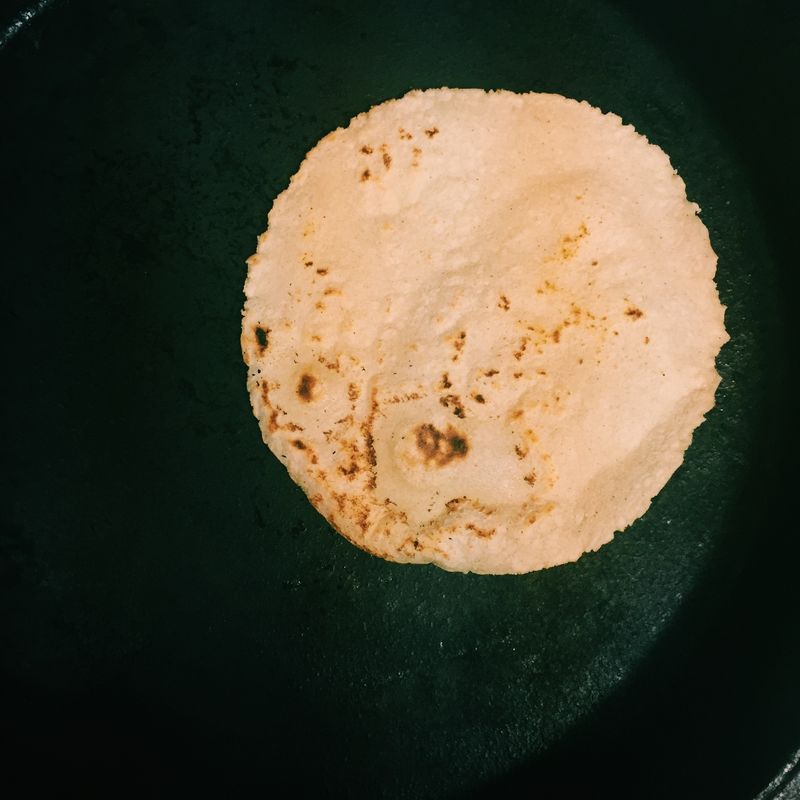 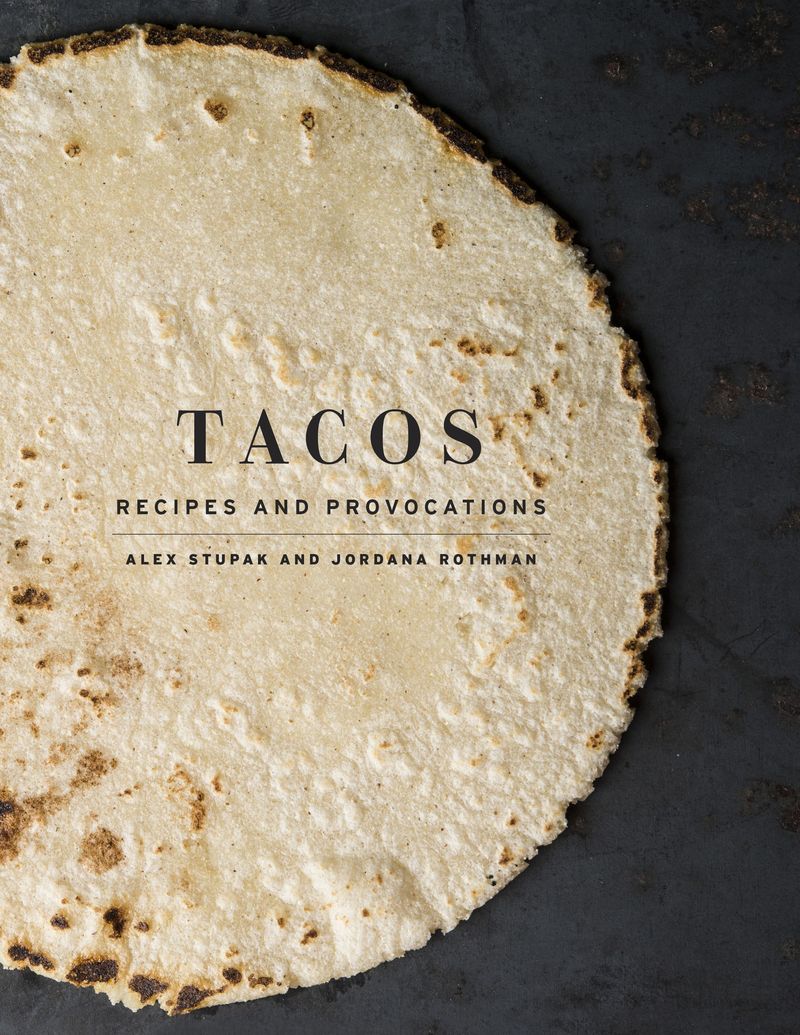 My attempt to recreate the cover at home

Don't even ask: No, you cannot subsitute store-bought tortillas with a clear conscience: "There is absolutely no substitute for a fresh, homemade tortilla, and suggesting any kind of store-bought alternatives would keep me up at night," Stupak writes.

At his three taco-serving Empellón restaurants in Manhattan, tortillas are made of fresh masa, which is itself made from ground nixtamal. That's a word you might never have heard before—and one I didn't even attempt to pronounce until last week.

Nixtamal is produced when dried, whole kernel field corn—not your eat-on-the-cob sweet corn, this is the majority of corn grown on the planet and is used in everything from animal feed to toothpaste—is made edible. The kernels are treated with an alkaline solution of water and calcium oxide (called "pickling lime"), which takes at least 12 hours, and then ground into masa. 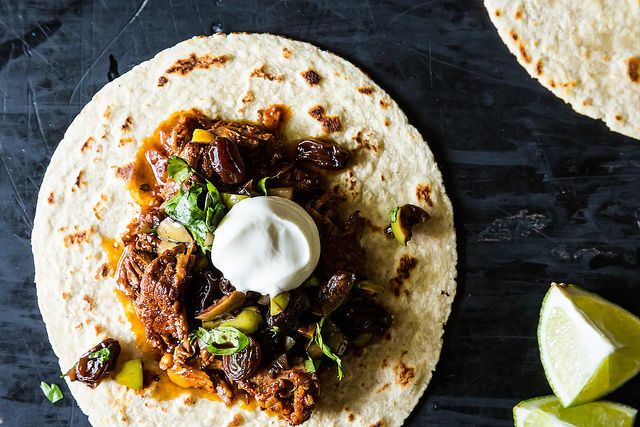 If this all sounds very complicated, it might come as a relief to know that you can't do this at home (Stupak says so!). Even if you make the nixtamal (and yes, there is a recipe in the book), there's no reliable piece of home kitchen equipment that will get the grinding job done. The only way they do it at Empellón (and at Hot Bread Kitchen, where they also make tortillas starting with real corn) is with an industrial corn grinder.

If you want to start with fresh masa, you'll have to tap into the resources of a nearby tortilla factory (and this will be in easier in San Diego or Chicago than, say, Fairbanks).

So what to do if you really want to obey Stupak's laws but you don't want to track down fresh masa? Use masa harina, an instant flour made from dehydrated masa. Masa harina is to masa as Folger's coffee is to the real stuff, says Stupak, but it still makes a tortilla better than the packaged options.

More: How to make corn tortillas, no tortilla press needed. 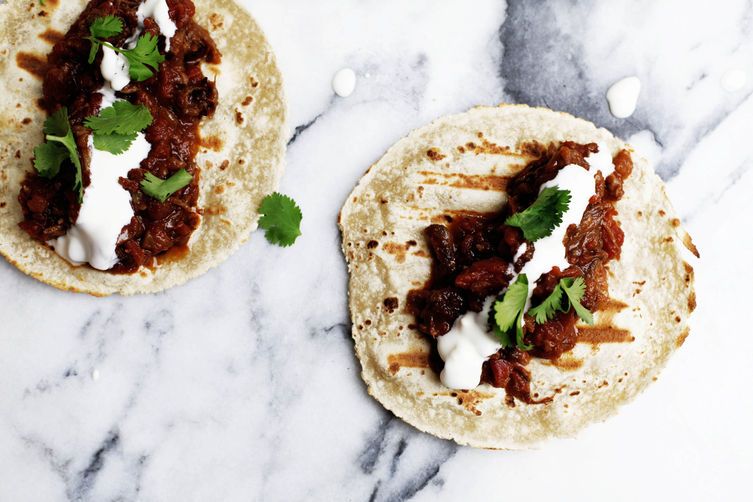 Still, I was skeptical that I could do this myself. Though Stupak made it seem easy to make corn tortillas when I visited him at his restaurant, could I really do it myself at home? I borrowed a taco press from Kenzi, mixed 1 1/2 cups masa harina with 1 cup of water, and kneaded to rehydrate.

The first challenge was getting the mixture to be the right consistency. You want the masa to be malleable and moist, but not overly wet. The dry dough cracked and crumbled under the press, whereas the wet mixture stuck to the plastic and the pan. 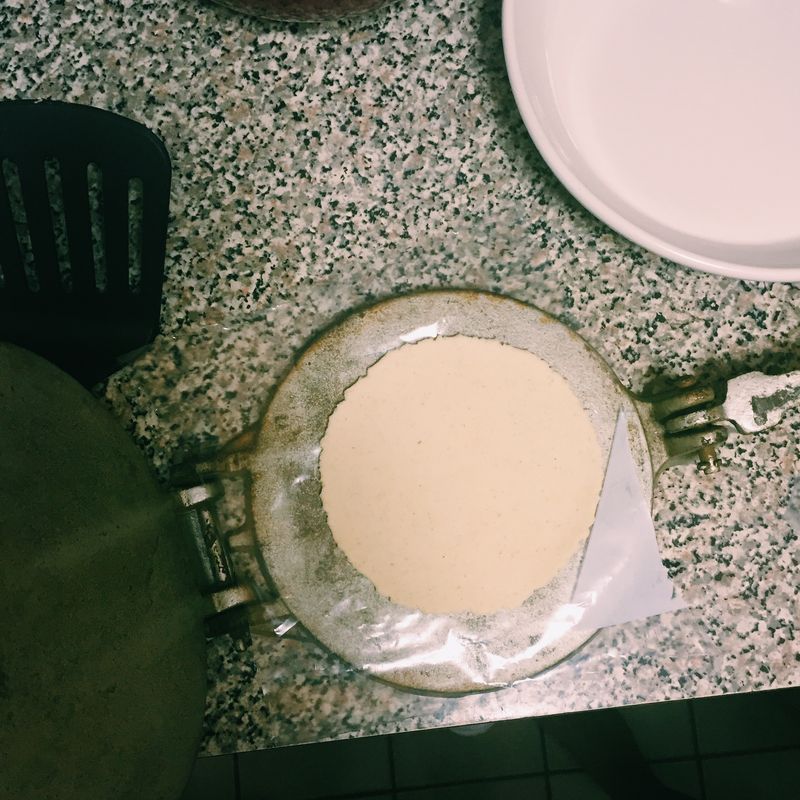 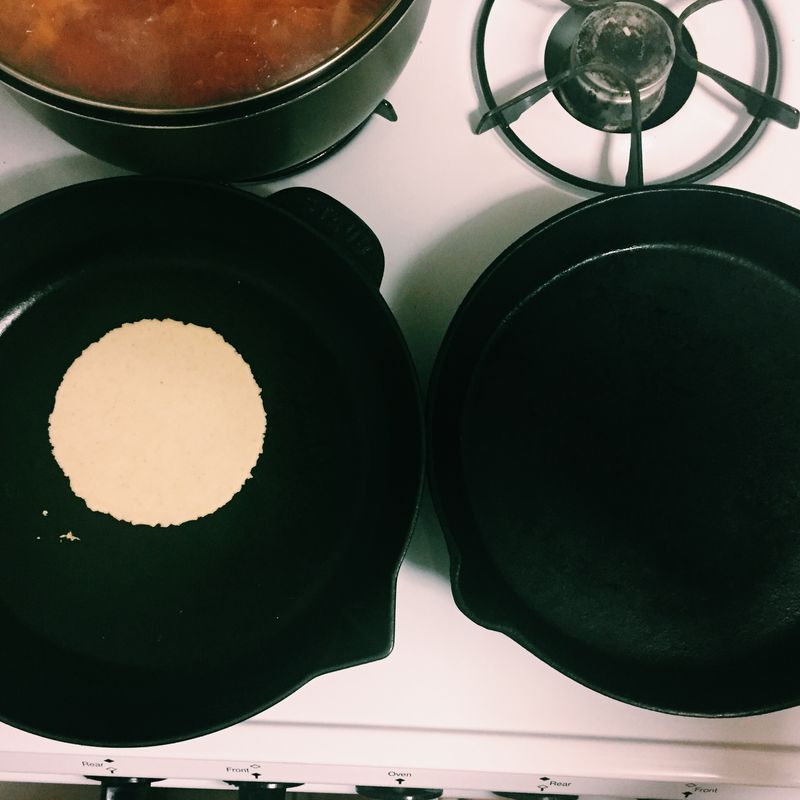 Once I got the moisture-level right, the next obstacle was controlling the heat of the skillets (yes, skillets multiple). For Stupak's recipe, you cook the tortilla first in a medium-high skillet (15 seconds on each side) and then you move it to a scorching hot skillet and cook it for 30 seconds, flip for 10 seconds, and then flip for a final 10 seconds.

If you've done it right, the tortilla will puff up dramatically once it moves to the hotter skillet. You will cheer and dance and attempt to take a video. 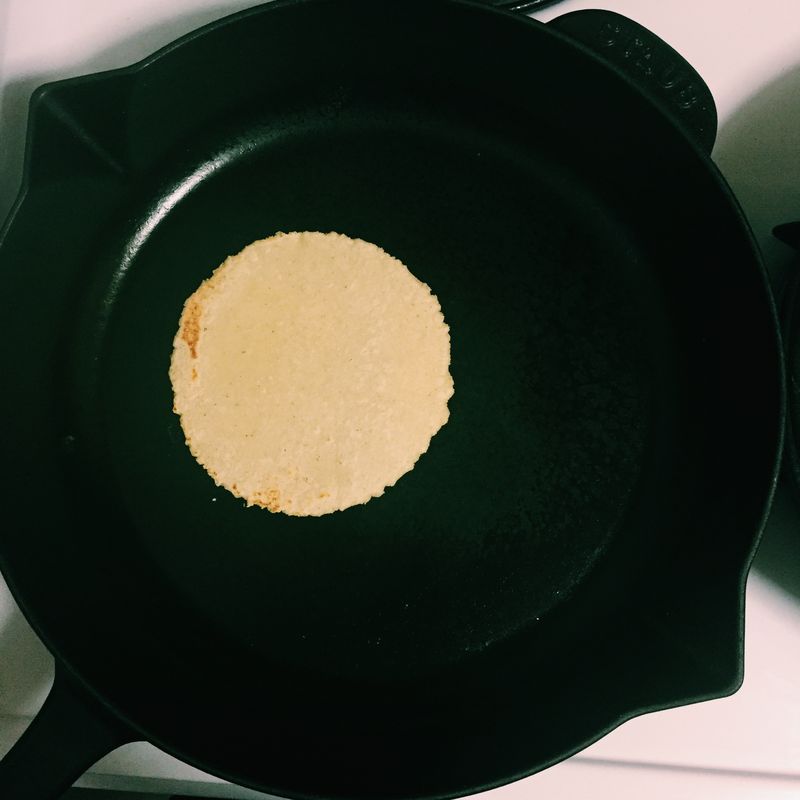 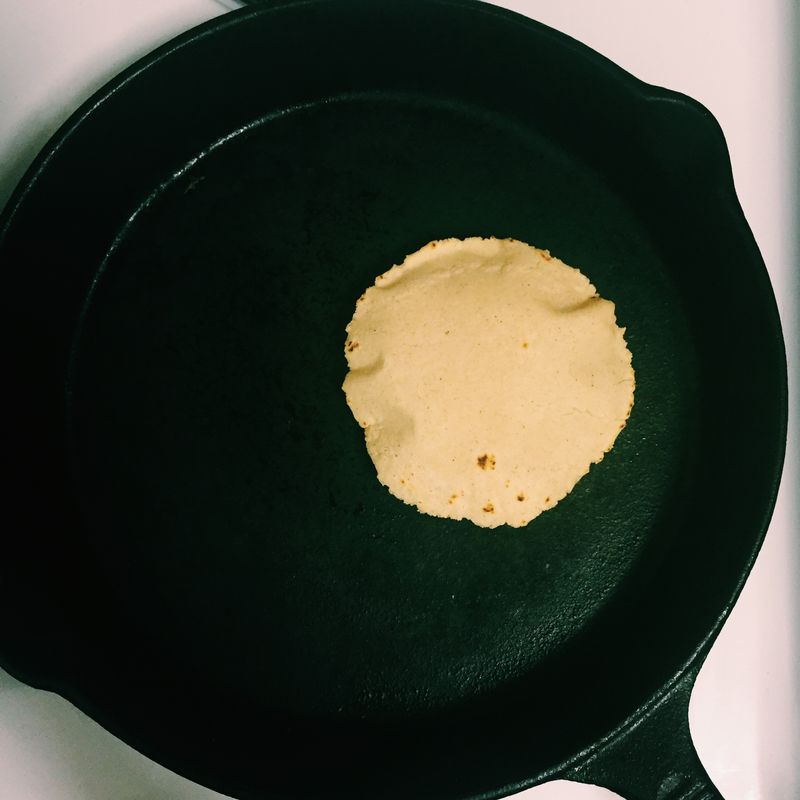 Tortilla in the medium-high pan (left) versus tortilla (puffing up!) in the hot-hot-hot pan (right)

Once I had cooked a few tortillas, I figured out a system with my roommate: As soon as I had moved the tortilla to the hotter pan, she would press the dough and lay it down into the cooler pan.

We got into a groove until the magic stopped. With almost no warning signs, our dough stopped cooperating, no matter how much masa harina or water I added to try to achieve homeostasis. It cracked and stuck to the plastic and generally frustrated us. So we stopped and ate the earlier models instead. 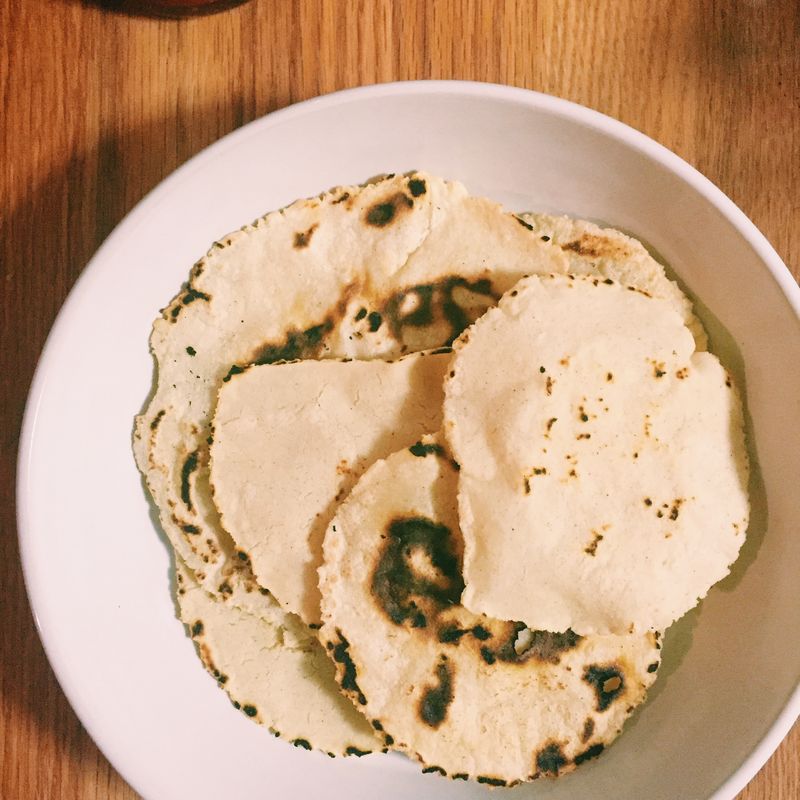 My finished corn tortillas, slightly misshapen and a little charred


And how did they taste? Their texture was definitely superior to any store-bought corn tortilla I've tried. But the flavor wasn't, walking the line between bland and bitter. My hypothesis is that the masa harina was stale. Since it's the only ingredient in the recipe, its quality is imperative.

I would, however, seek out some new masa harina and make these again. It wasn't difficult and it brought me the satisfication that only DIY projects can. And only once I've mastered the tortilla will I move on to the stuff inside—I have a feeling that will be a while.

Why did my tortillas taste a little off? Share your advice in the comments.

Jay P. March 8, 2016
I've been making corn tortillas for breakfast nearly every day for a few months now. 30g of Masa to 50g of water. That makes 4 20g tortillas, though until a couple weeks ago made 3 vice ones. I press them between two wooden cutting boards wrapped in plastic wrap. I don't know whether I'll have the energy to use the two skillet method, just a very hot griddle does pretty well. My girlfriend makes fun of me eating them every day (while she eats oatmeal every day), but I just can't stop. I usually just put a bit of cheese and add lettuce, avocado, egg, or whatever is left over from dinner.

MrsWheelbarrow October 19, 2015
And now that you've made your own tortillas, try my recipe for hidden eggs, put here on the site a zillion years ago.

Doug R. October 15, 2015
I've been making homemade tortillas (flour AND corn) for better than ten years. There's nothing that compares. That being said, we still buy store tortillas most of the time, due to time constraints.

Jared S. October 15, 2015
I've used the glass pie plate method as well with parchment paper. Adding salt and lime also brightens the flavor! Might try chipotle in the near future

Smaug October 13, 2015
I don't know- here in California, you can get pretty good storebought tortillas even without going to a tortilla factory, and they aren't hard to find. I make my own a lot of the time because I enjoy it. I like to give them some time to hydrate- I usually mix up the dough in the morning to cook in the afternoon. Unfortunately, the generally available brand of dried masa, Maseca, is a white corn product and doesn't have much taste. They make a yellow corn version, available for big bucks on Amazon (possibly even in Norway)- It has much better flavor, but is a bit trickier to use for some reason. Bob's Red Mill also makes a yellow corn masa, but I've found it too coarse for tortillas- maybe tamales. My formula, for what it's worth, 1 1/4 c. masa to 7/8 c. water (I may add a couple of tsp. before pressing) and a pinch of salt; in my giddier moods I sometimes add other flavorings- Ancho chile powder, eg.- like with pie crusts, such things should be in very small quantities.

laurenlocally October 13, 2015
I have both the masa and the press at home, and needed this inspiration!

janet October 13, 2015
i don't know why they tasted 'off' - but if you want a richer flavor, use 'corn' water from boiling an ear of corn - it definitely adds to the final product

aargersi October 13, 2015
It had to be the masa creating the off flavor UNLESS there was old oil hiding in the iron skillet? So when I make them (I am lazy and we have a store here that makes fresh corn tortillas that you can buy in 30 packs, still warm, for a couple bucks, so I usually do that) I add a good pinch of salt and a squeeze of lime to the masa. Not conventional, but tasty! Then I do both sides in the same super hot skillet. That's all I got
Author Comment

Stephanie G. October 13, 2015
I always add salt.
I also use a glass pie plate and a ziplock bag to press them. The glass allows me to see the thickness of the tortilla. In my experience, the thin-ness of the tortilla and the heat of the cast iron makes it more likely to puff...sorta like pita bread.