Posie Harwood, who finds the best back-of-the-box recipes in the grocery store, takes advice from Canada on pie crust. 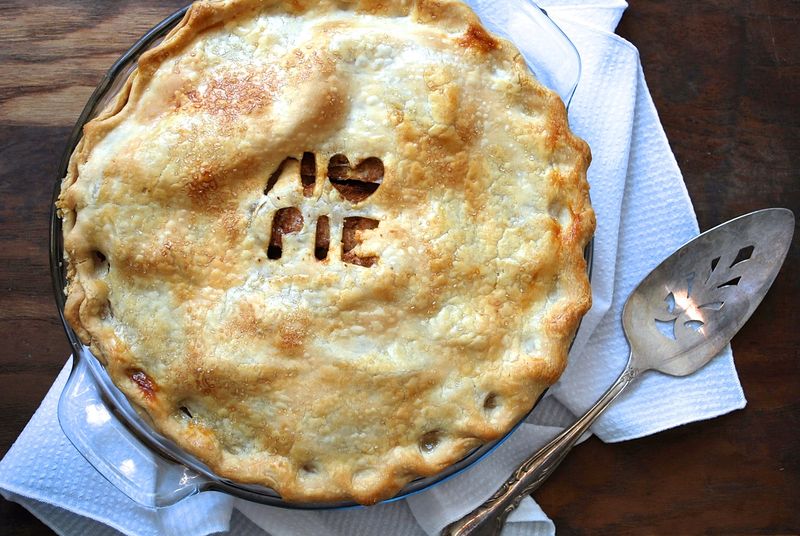 With Thanksgiving and winter holidays around the corner, talk of pie has started to creep up everywhere.

You can’t browse the internet without stumbling over someone’s advice for pie crust, and a novice baker could easily be overwhelmed with options.

Some swear by shortening, others by all butter. One cookbook instructs you to use vodka, another lists apple cider vinegar. Your grandmother uses pastry flour, your mother uses all-purpose.

More: Three ways to fancy up your pies. 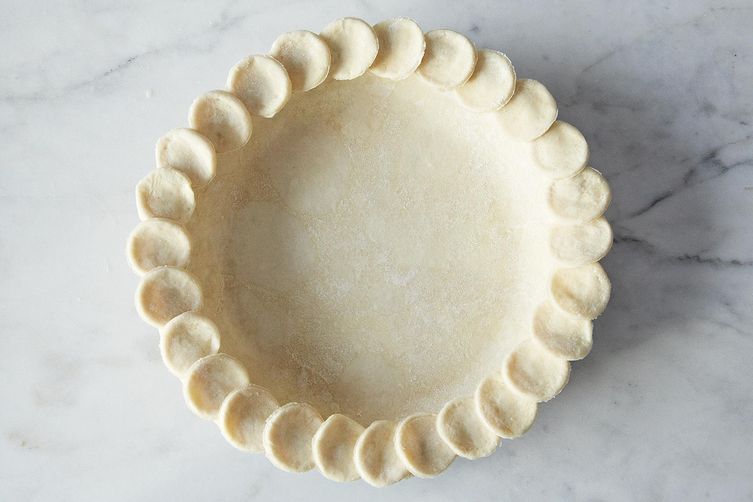 I’ve always used an all-butter pie crust. No vodka, no vinegar. Five simple ingredients, regardless of the type of pie or quiche in question. I love that recipe, and I’ll surely be writing more about it in the coming weeks as I play around with fillings and fruits.

But in the spirit of my back-of-the-box recipe experiments, I thought I’d audition another crust. This one comes from Tenderflake, a Canadian lard company. The all-lard crust has a slightly vinegar tang, reminiscent of British hot water crust pastry used for savory pies.

My filling is a very basic combination of peeled and sliced apples with a little lemon juice, flour, and cinnamon and sugar to taste. I rarely use a recipe here and just eyeball the amounts. Be sure to prepare the filling at least 1 hour in advance of baking to allow the apples to release some of their juices. Either discard the excess liquid or boil it down in a saucepan until syrupy and drizzle it over the filling. 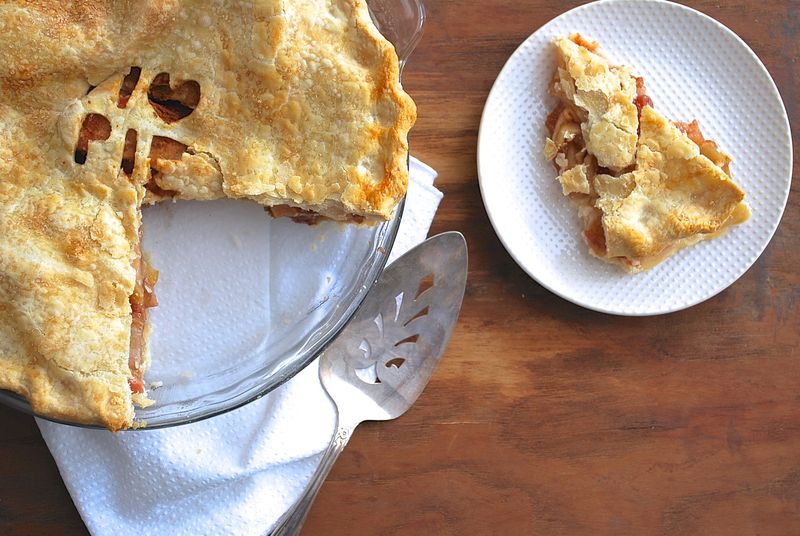 I do like the crackly, flaky crust with apples, but, in my opinion, the inclusion of vinegar lends itself better to savory fillings or quiche. If you do go sweet, use it with hardier, less delicate fillings like apples or pumpkin.

As you can see from the photos, the crust is harder and breaks apart more sharply than does the softer, slightly more pliable flaky pastry crust. The overall effect is nicely shattered bits of crisp pastry strewn amongst your soft apple filling, and it tastes as lovely as it sounds.

Before the crush of holiday baking, try out this crust. Bake a spinach quiche on a Wednesday night, or an apple pie on a weekend afternoon, and see what you think. Does it earn a spot in your all-star pie roster? 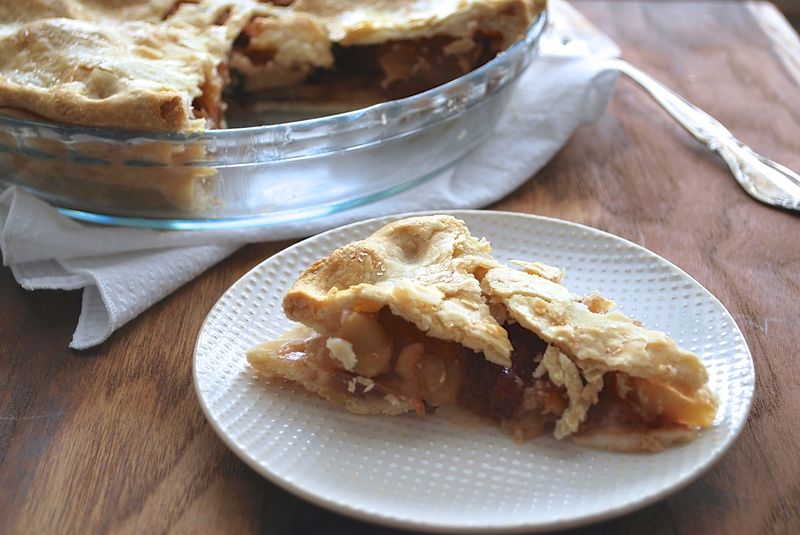 Second photo by James Ransom; all other photos by Posie Harwood

Eileen February 9, 2016
I make all butter crust according to the Cook's Illustrated recipe which uses 12 T. butter, 3 T. sour cream (mixed in with the cold water) and 2 1/2 c. flour. The sour cream makes it flaky - I assume because of the acid. I love the buttery taste but get more flakiness if I use half butter, half frozen lard. The two most important things are keeping everything cold - even returning to fridge or freezer in the middle of the process to chill things up again - and not handling more than necessary after adding the water.

Cherie November 8, 2015
My mother and grandmother always used the Tenderflake lard recipe and so do I. I have made hundreds of pies as a caterer over the years and I always get compliments on the pastry. I think the secret may be to handle it as little as possible. I often wondered about the purpose of the vinegar but I have never tried it without. Last Thanksgiving I used a pound of Crisco shortening as my local store was out of lard and the results were very different and disappointing. I don't worry about the unhealthy lard too much - just try to save pie for special occasions...

MarZig October 28, 2015
Since we are talking pie crust. Anybody have some suggestions for higher altitude. When I am in 7000 feet, i have problems with the crust, including ready made crust. The crust seems to spread more (when doing rustic pies/crostata) and it also seems to take FOREVER to bake. Not sure if I have ingredient issues and/or over temp problems? Tried kicking temp up 25 degrees but meh??? not that much of a difference. Thanks for the tips and explanations... I am a serious pie crust person :)
Author Comment

Posie (. October 28, 2015
Hm, the main challenge I know of with pie crust at high altitude is that it can dry out more easily, so sometimes you'll need a touch more liquid and should use flour very sparingly when rolling out the dough. I have read that it will take longer to bake though than at sea level, so I'd suggest covering the edges with foil and just baking it longer. However, I'm also wondering if it could be your oven (if it's not your regular kitchen) -- do you have a standalone oven thermometer that you could use to check the temp and make sure it matches the oven display?

nancy E. October 28, 2015
Vinegar in the crust inhibits the formation of long strand gluten, resulting in a flakier crust. Alcohol has the same results. It is not there for flavour as you can never taste it in the finished product unless you used much too much

MarZig October 28, 2015
Thank you. Its interesting to find out the chemistry behind the ingredient. I am seriously gonna give it a try on my next pie crust.

beejay45 November 5, 2015
Can you go a little deeper? I.e., is it the acidity/pH of the vinegar? Would something like lemon juice do as well? Thanks.
Author Comment

Posie (. November 5, 2015
Actually, the fact is that in order to have enough acid to inhibit the gluten formation, you'd need A LOT -- too much to put in pie crust (it would make the dough too liquidy). So, scientifically acid would help give the pie crust more tender but in this small amount it doesn't have much of an effect. Guess it's just a holdover from old recipes, and I still do it because it feels kind of comforting!

beejay45 November 9, 2015
Ah. Thanks. My grandmother never used it, and her crusts were amazing. I was wondering if I needed to change that, but I guess not. ;)

Doug R. October 28, 2015
My wife makes the flakiest pie crusts I've ever had (even better than my aunt, and that's saying something). She uses a 50/50 mix of lard and butter for hers.

Betsey October 27, 2015
I made a pumpkin pie one year with Crisco and all I could smell as I ate it was the Crisco. Blort. I'll stick with refrigerated pie crust from now on.

MarZig October 26, 2015
no offense but what makes this Canadian. Is it the vinegar? Otherwise Everybody knows the best and flakeist pie crusts are made from lard or hydrogenated vegetable oil (solid white stuff/crisco.)
Author Comment

Posie (. October 26, 2015
Oh, this particular recipe comes from Tenderflake, which is a Canadian company! So not quintessentially Canadian, just me being silly.

MarZig October 26, 2015
no worries... I really wanted to know... plus I never heard of adding vinegar before. I am gonna try this if opportunity presents it's self next time visiting family up in Canada (so I can get Tenderflake; i haven't seen it on the State's side of the boarder)

Ellie B. October 25, 2015
Interesting~I still can't get over that lard is...lard! since I am still somewhat of a semi-health nut! ;P haha. But I can see how good of a crust lard would rend.

violentyoda October 26, 2015
I'm sure the lard is lovely, but my grandma always used this recipe (basically!) with shortening instead. I LOVE it, no other pie crust compares to me. It's soooo flaky and tender. All butter crusts are too much like cookies, and shortening without vinegar/egg is just bland. Eating this growing up has left me extremely biased and picky about pie crust!