The Most Addictive Bread You'll Ever Eat

We partnered with Jet.com so you can browse their (digital) shelves while you're searching for ingredients or supplies. (Seriously, they have everything!) Get almost every ingredient for this recipe here.

This is how the conversation normally starts when I say that I went to Davidson College. Located just north of Charlotte, the quintessential college town of Davidson used to be a well-kept secret—until 2015, that is. In June, former student Stephen Curry won an N.B.A. championship and an M.V.P. title.

But the fame I was more interested in was due to a recipe and a restaurant (sorry, Steph). 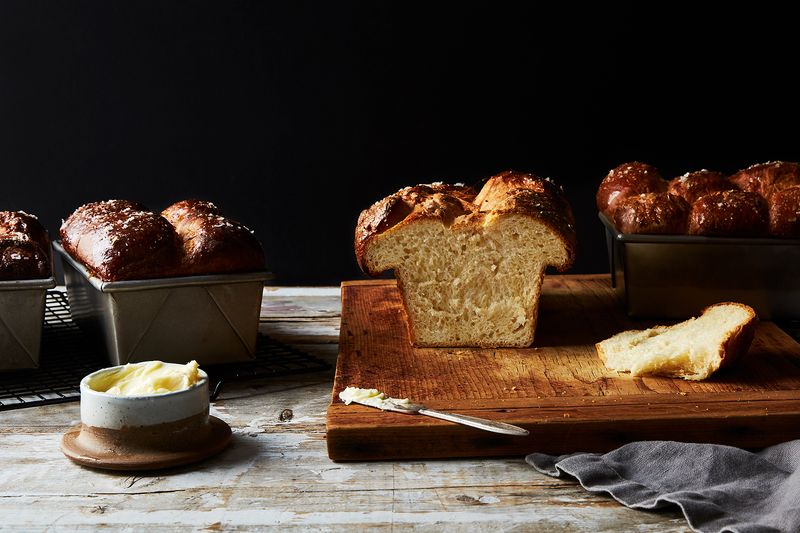 Kindred Restaurant opened in February 2015 on Davidson's Main Street—the only street in town worth knowing. The opening was a warm homecoming for the Davidson-bred owner and chef, Joe Kindred, who started the restaurant with his wife Katy.

The first week it opened, a number of my colleagues at Summit coffee shop visited and each came back regaling the same story, about the same recipe, the same starter, the same bread: Kindred's Milk Bread.

For a whole week, I couldn't stop hearing about how addictive, how salty, how warm this bread was. But the whole time, I was wondering, What's all this fuss about a loaf of bread? 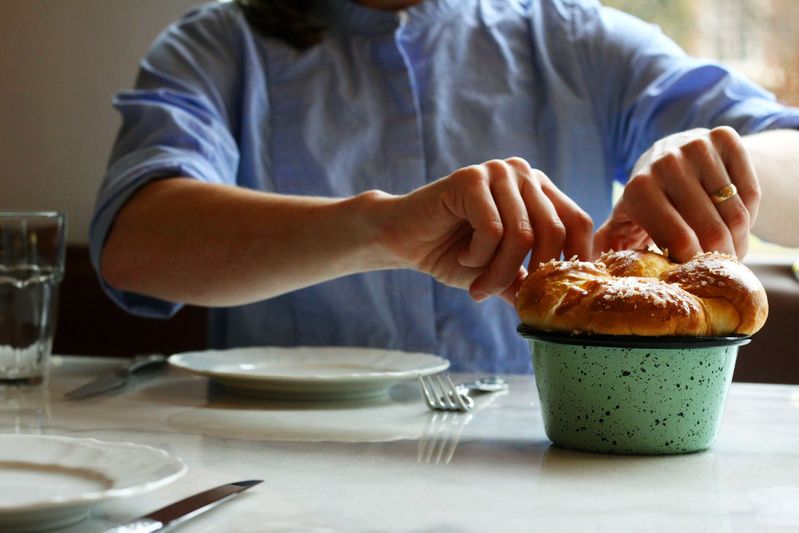 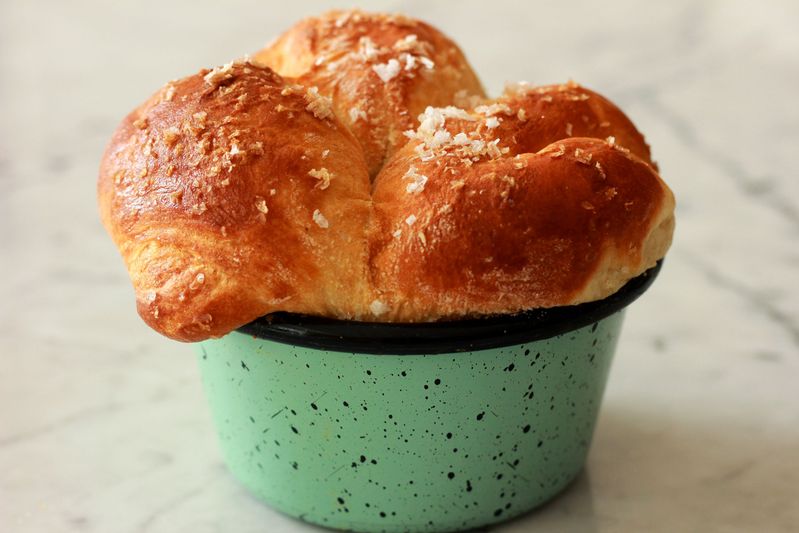 And now, I'm preaching that fuss to you. After a week, I couldn't take it anymore and I decided to try the Milk Bread and the rest of Kindred's menu for myself. I walked the five minutes it took to get there and was seated at a table for four, where I waited for my other friends to arrive (as I, the eager restaurant eater, often do).

Then I saw it: the Milk Bread. The waiter, seeing that I was seated, came and placed it on my empty table. Now, how was I supposed to sit there waiting for my friends to arrive with this bread, the Milk Bread, placed in front of me? I eyed its muffin-like top, bursting with sparkly salt. The spots of sandy-colored dough bunked next to a darker golden shell brainwashed me. How long until they get here? And then, in moments, my friends seated themselves and the four of us tried—and finished—Kindred's Milk Bread.

Then we ordered another. And another. You get it—I was on the bandwagon. 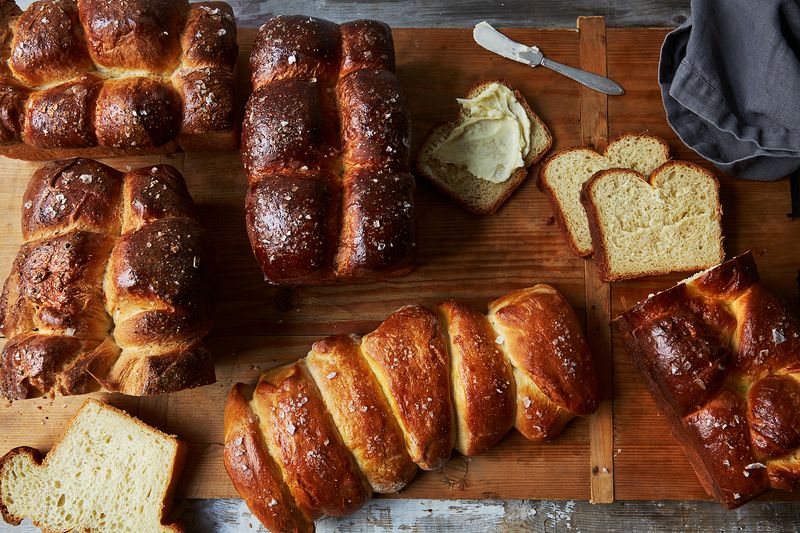 Since then, I've visited Kindred three more times, each time consuming inappropriate amounts of Milk Bread. But given the fact that my love for Kindred's Milk Bread now fringes on addiction and I no longer live in Davidson, I decided that I would have to make the Milk Bread at home.

Within twenty-four hours hours of learning the recipe (I was lucky enough to host Chef Joe Kindred in our office with my Food52 colleagues), I made four loaves. And to my great delight, every one in our office ate their bodyweight in Kindred's Milk Bread that day. And they're still talking about it.

Now, it's time for you to make it! Not sure what you might use it for? If you don't want to eat Milk Bread plain (but really, is that even a question?), Joe says that you can truly enjoy it at every meal: French toast, sandwich bread, burgers, lobster rolls, doughnuts. Just swap the Milk Bread recipe in and you're one step closer to creating a whole new network of followers. 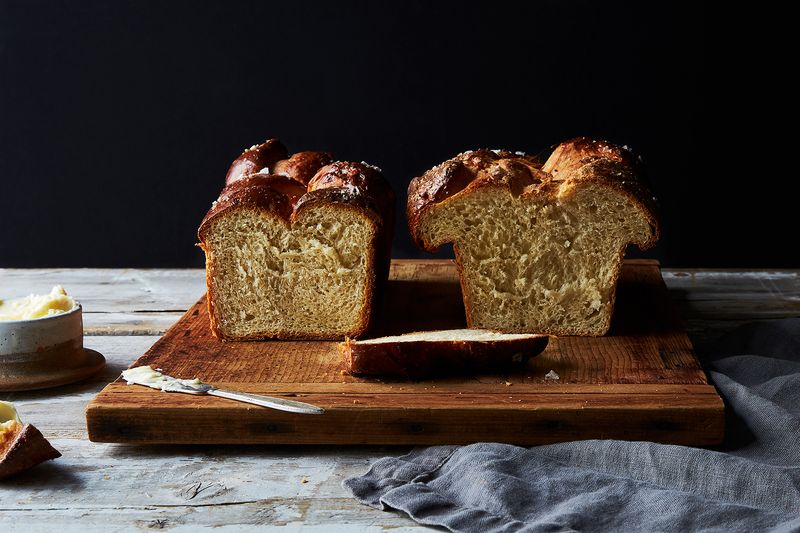 foodstuffs.blog
foodstuffs is my interweb home where i log recipe projects, new foods i’m tasting, and any other stuff i feel like sharing. come stop in!

Nina B. March 28, 2020
I can’t count the ways Food 52 has enriched our lives but now crave those Enamelware bowls in which Kindred’s Milk Bread is baked. Can you let us know the source?

Karen September 11, 2018
I'm sorry.. but Betty, was your sea salt lecture really necessary ? Every one has the choice to use it or not when they know the medical effects it ( sea salt ) may have ? Just Sayin.

Betty August 7, 2018
For all us cooks who use sea salt, do you realize what you are doing to your bodies? The reason Morton salt has iodine in it is to prevent GOITERS and THYROID operations and also to keep from taking pills before you eat in the morning. My mother had a goiter and I have a enlarged thyroid and I used Sea Salt. Why did I ? I followed. I followed recipes and articles and I kept using it. I even bought some fancy salt. Then I realized that we are following without checking out what we are following..So, ask your computer, teacher, doctor as to why we need the iodine.. Stop following. Be an individual.

Michael O. August 10, 2018
Iodine is available in sources other than salt. Depending on diet, everyone has different requirements.

carol September 15, 2018
Many many foods, vegs and dairy contain iodine. Yes, you can get too much. Getting high levels of iodine can cause some of the same symptoms as iodine deficiency, including goiter (an enlarged thyroid gland). High iodine intakes can also cause thyroid gland inflammation and thyroid cancer. Just saying from a dietitians point of view. There is a balance for everyone and everything.
But bread is yummy!!!

Miles April 8, 2020
Enlighten us...😂. Sea salt has many trace and micronutrients...furthermore Ms. know it all. Iodine was introduced into salt in the 20’s. When we didn’t have such a selection of goods available to us. 100 years later it is not needed. Furthermore, that chemical shitstorm you liken to iodized salt is toxic to the human body. Furthermore, hashimotos is a very real and prevalent autoimmune condition, and supplementing Synthetic forms iodine as in iodized salt further destroys the thyroid gland. Now this is a good site not a medical site, save your erroneous opinionated rant for your FB page. No ones cares here.

Mtlong04 June 25, 2018
Has anyone tried braiding this like challah?

Elizabeth S. May 31, 2018
hi! I just made this bread. Tastes great but my dough was much stickier than the dough in the video. Did anyone else add more bread flour? If so, how much? thanks

Greg E. May 14, 2018
It will not work. Whole wheat flour has sharp little points that puncture the walls. Just stop with the whole wheat stuff and enjoy your food.

NC July 8, 2018
Smh. Terrible assumption that someone isn't enjoying their food since ply bc they wanted to make the bread healthier. How rude and childish of you,grow up.

Miles April 8, 2020
Wheat will more than likely weigh it down and make it much denser. Try substituting a little at a time you will have to play with the ratio because of the different gluten content.

Teresa March 29, 2018
What if I don’t have bread flour? Can I use regular flour? If so what needs to be done different, if anything?
I ask this hoping not to offend anybody or cause a storm of mean responses. It’s a question I have had before but never asked. For some reason I feel compelled to ask today. I am an experienced cook/Baker. Definitely not at a professional level, but I know what I’m doing in the kitchen for the most part. How does a person find out something unless they ask, right? So here it goes.....
Thank you much and I hope you all have a wonderful evening! Take care!

MD March 29, 2018
you can definitely use All Purpose flour (hey, it's for All Purposes, afterall!). Bread flour has, if I'm remembering correctly (my mom is an avid baker and obsessive, frenetic researcher), has a higher amount of gluten, so you get a better elasticity/bounce to the bread. It definitely produces a nicer finished product, but not having it absolutely is *not* a dealbreaker!

Robin S. June 18, 2018
You are so right, thanks! I looked it up:
Add one teaspoon vital wheat gluten per cup of flour. This converts all-purpose flour to a form that can be used just like bread flour. This ratio scales proportionally. For instance, if your recipe calls for 2 1/2 cups of bread flour, you would add 2 1/2 teaspoons vital wheat gluten to 2 1/2 cups of all-purpose flour.

mary February 23, 2018
The texture was amazing, it would be fun to add different spices, such as cardamon, or cinnamon etc. I would definitely make it again
thanks

Shari February 21, 2018
So very VERY sad...They closed down the end of the farmer's market summer/fall season 2017. They were the most impressive bread artisans I've ever met in person. Everything was wonderful. I enjoyed them back when they were just a tent in the market. WOW! Irreplaceable...They now live in Morganton NC. No word if they have another location. My only question...Did you get the biscuit recipe? Hate them normally but fell head over heals with their breakfast biscuits!!! It's like they bake with bread fairy magic...LOL.

Raymond G. July 2, 2018
Hey. Who are the bakers you're talking about? What was their business called?

Picholine December 30, 2017
There is an inconsistency with the recipe as posted here and the one that says “for the full recipe”the full recipe calls for a lot of salt . The first has none added to Dough . Big difference!

Picholine December 30, 2017
Kosher salt is best used! Has to be your measurements!

Picholine December 30, 2017
After checking , one recipe has salt the other doesn’t so maybe one is written wrong

Teresa D. December 29, 2017
This appears very similar to a brioche recipe I've made before, with adjustments, brioche is addicting, is a bread, not a roll... differences in room temperature, humidity, flour temperature, and various things like altitude can affect a bread in the end. IF a person tries it without success, please find out what was wrong on attempt one and adjust from there. Advice from one pastry chef to others, use your nose, tastebuds, & overall senses when creating food. A roll IS a type of bread, no need to judge one stripe by another. But the difference is merely in the shaping from pan to pan & ingredient content is a very blurred line. Best wishes!

Kirsten M. December 12, 2017
Just deleted all the nonsense about this being a) bread, and b) addictive. It is an overly sweet roll that amazingly is also too salty. It is not bread. Get it? Not bread.

kris November 12, 2017
the reason it's so popular is because it's basically a sweet roll! Cream, butter, eggs, honey...! This is not Bread! Add some cinnamon and frosting on the top--you'll have cinnamon buns. But bread it is not....

MrSnickers October 26, 2017
I've made about 4 times until I found a Milk Bread with Honey Bread. This is very good however I do not think I would give up at this recipe. There are much grander out there.

Marie October 20, 2017
I did not use the salt that was included in the recipe I used only a half teaspoon mine came out delicious

Beth100 October 20, 2017
A possible solution to the overly-salty issues many are experiencing:

Jody H. September 10, 2018
Thanks for the tip. The article was really interesting and made so much sense about how salty a recipe tastes! I will now adjust my recipes accordingly 😀

Dot W. October 18, 2017
Made this bread several weeks ago and it was AMAZING....a little salty mind and I might reduce that the next time I bake, but this recipe was so easy and so delicious. Both loaves had a really good crumb. If only bread was on my list of approved diet foods!