There are so many beautiful loaves of bread on (Not)Recipes, but ink and lemon (a.k.a Lucy)'s caught our attention because it's spotted with chocolate polka dots: 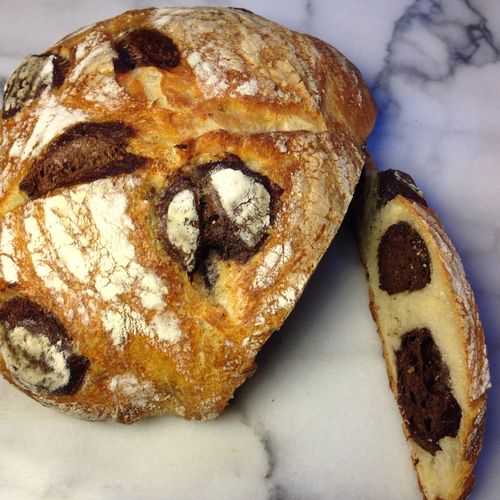 ink and lemon over 6 years ago
29
Sourdough with dark chocolate spots! It has moments of deep chocolate flavor without being sweet- perfect for cheese!
I used a lowish- hydration dough with a one hour autolyse. After the first set of stretch and folds, separated out about a third of the dough and worked in a paste of cocoa powder and water. After bulk fermentation, divided chocolate dough into twelve pieces and shaped into balls, then individually wrapped in master dough and squished together into a boule. Proof, score and bake as normal.

As she wrote on her blog by the same name, her project was inspired by giraffe bread, which is sometimes confused with tiger bread, a.k.a Dutch Crunch bread—which has a crackly, sectional top thanks to a pre-bake rice paste coating. (Judging from what I've found on Instagram and Pinterest, giraffe bread seems to have more traction outside of the U.S.—at least as of now.)

A couple weeks back, Lucy followed a recipe, which she translated from Spanish, for giraffe bread made with a simple yeasted milk dough.

But having caught the sourdough bug, she wanted to apply the same technique—split up the dough and color part of it with cocoa powder, then wrap the plain dough around logs of the chocolate sections—using her starter. So...

On today's breakfast table for the littles: soft and fluffy giraffe bread. I finally got myself a pullman pan during the Labour Day Phoon Huat sale, but of course I missed out on the digital scale (aunty grabbed the last piece just as I turned into the shelf lane), hence the not-so-balanced giraffe spots. Adapted @sonianll's #eggfree recipe to make it #vegan and #refinedsugarfree.

"The cocoa powder paste was a tiny bit bitter, but only in the good way," said Lucy. And since she didn't add any sweetener to the bread, it's just as good with cheese as it is with jam.

And now we're left wondering: What other flavors, pastes, and patterns are possible?