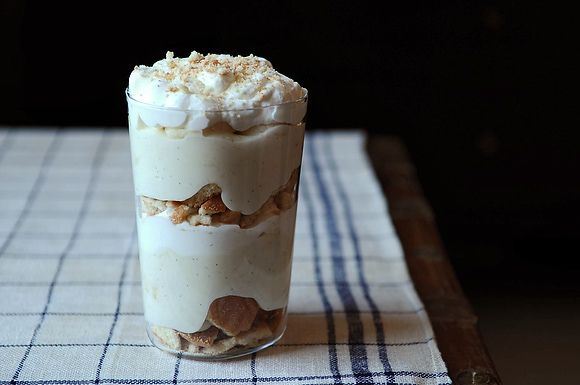 My friend Alexandra is a self-trained banana pudding aficionado. If banana pudding's on the menu, she's guaranteed to order it -- and to have strong opinions about it afterwards. In case you're unfamiliar with this Southern classic, it's basically a trifle made with pudding, vanilla wafers and bananas. Like most traditional dishes, there are as many versions of banana pudding as there are cooks who make it.

A few years ago, Alexandra was kind enough to let me tag along on her quest to find the best banana pudding in New York City. We went on a series of field trips to various soul food joints in boroughs near and far, seeking out the puddings that had come the most highly recommended -- from friends, friends-of-friends, and total strangers on the web.

This rigorous bout of research was followed by a blind banana pudding taste test that Alexandra hosted at her apartment. We ran around the city, gathering samples of our top contenders, and then seven or eight of us sat in a circle in her living room, spoon in one hand, typed questionnaire in the other, assessing the taste, texture and overall appeal of each pudding.

While I don't remember the final consensus, I do clearly recall my own favorite. I'm not a huge fan of their cupcakes, which are too sweet for my taste, but Magnolia Bakery has won a permanent place in my heart with their banana pudding. Less dense than most renditions, their pudding is lightened with fresh whipped cream and studded with healthy chunks of banana. Some prefer a smooth pudding (ahem, lizb, I'm really hoping we can still be friends after this post), but I like my banana pudding to have little pieces of fruit, to remind me that I'm eating something made from scratch rather than from a box.

Last week, spurred on by our pudding contest, I attempted to recreate Magnolia's light, not-too-sweet banana pudding, using this simple vanilla pudding recipe from Martha Stewart as my jumping-off point. And I think I came pretty close to the original. Of course, the real test will come when I make it for Alexandra.

TammyE August 15, 2011
This looks fab!had the magnolia banana pudding a couple of years back in NYC and still remember how tasty it was, even though sickly sweet!
Really want to make it now..but im in the UK and neither jello pudding or nilla wafers are available here. Thank you for your recipe for pudding, but what do you suggest as the best substitute for vanilla wafers? Could you please describe them? as i have actually never had them.Thanks

TammyE August 15, 2011
this looks fab, tried the magnolia banana pudding in NY a couple of years back and although i remember it being sickly sweet i still loved it!
i really want to make it but i live in the uk and neither jello pudding or nilla wafers are available here!thank you for your pudding recipe...but what should i use instead of the wafers!?what are nilla wafers like anyway, i have never had them.

Embrosia March 26, 2011
Crumbling vanilla wafers and chopping bananas? Must be a Yankee thing. Banana Pudding in North Carolina is multi-layered with whole Nillas, round banana slices and pudding in a large shallow dish, about 2 inches deep.

kellymcmichael March 17, 2011
The Common Sense Kitchen has a recipe for a from-scratch banana pudding with homemade vanilla wafers. They are truly awesome. Do try them sometime.

Jane E. March 13, 2011
The pudding looks just right; I wonder how it would be with vanilla bean shortbread? I think my mother would have called it "wretched excess." Can't wait to make it; I have bananas ripening now.

Merrill S. March 13, 2011
My mother would call it the same thing. That shortbread idea sounds over the top. Let me know if you try it!

Meredisu March 13, 2011
I made this and it was downright heavenly! I'm living in Buenos Aires right now so Nilla wafers were simply not an option, however it was still wonderful. Barely lasted two days in our fridge because we couldn't stop eating it! Many thanks for the recipe!

lizb March 10, 2011
Of course we can be friends! I'm sure I'll love this as much as I love Magnolia's banana pudding. My recipe was created almost out of necessity – while a nice ripe banana in pudding is lovely, the bruised, brown, over-ripe bananas in my fruit bowl make an otherwise tasty pudding look unappealing. I'm not sure how bananas go from green to brown in an hour, but the next time I catch them in that perfect ripe phase I'm going to make this pudding. I have lots of Nilla wafers in the pantry and no other acceptable uses.

lacerise March 14, 2011
I've been buying only organic bananas for a few years now and they ripen quite slowly and then, once brownish on the outside, are still firm, not overly sweet, and heavenly on the inside. Most people I tell this to say that organic fruit, including bananas, should ripen and then rot more quickly than non-organics, but that's not been my experience.

courtneycarlson March 10, 2011
I bought the Magnolia Bakery cookbook at a tj maxx a couple on months ago only flipping to the index to see if they had the banana pudding recipe--didn't look at the actual recipe. Got home and Opened the book to find Jello vanilla pudding as the base for the recipe--so disappointing--so grateful for your take on it. I used to live around the corner from Magnolia and the pudding and sometimes available peanut butter ice cream (now discontinued, i hear) were my favorite treats there. Yum.

Renee's K. March 8, 2011
Love banana pudding. It's dangerous! I keep a stash of ripe bananas in the freezer to add to smoothies and other recipes. I'm going to try this next!

beyondcelery March 8, 2011
Yum! This is one of my favorite desserts. I'll have to taste this version. But may I add that there is one substitute for Nilla wafers: homemade vanilla wafers. I couldn't go back once I started making my own. (And yes, it was specifically for banana pudding!) =)

ChefJune March 9, 2011
Merrill, I arrived at those one time when I overbaked lady fingers!

singing_baker March 8, 2011
Can't wait to make this! I just have to wait until my bananas ripen. Thanks for the great recipe.

drbabs March 8, 2011
I love banana pudding, too, and you're right--only Nilla wafer will do.

Panfusine March 8, 2011
Hats off to you for nonchalantly placing your laptop right on the counter. I have a tough time placing my point & shoot camera w/o getting some food particle on the buttons!

mrslarkin March 8, 2011
Yum! I like how the vanilla seeds are visible throughout the pudding. Or is that just my dusty monitor? ;) Sconeman, the techie, got this keyboard-cleaning-goop for his team: http://www.thinkgeek.com/homeoffice/gear/b88d/ He says it works pretty well!

ChefJune March 8, 2011
I'm with you, Merrill. I like sizable pieces of banana in my banana pudding. My recipe comes from my Southern "Other Mother." The only reason I didn't enter it in the pudding contest is I would have had to make it, and I KNOW I would have eaten far too much of it.

After my Spring Cleanse is over, I am going to try your Magnolia recipa to see if it's as good as Mamma's. A test, you know? :)

SarahS March 8, 2011
Merrill - we had a hard time because I believe I was greedily eating all of this pudding. ChefJune this recipe is worth making after your cleanse is over. Enjoy!