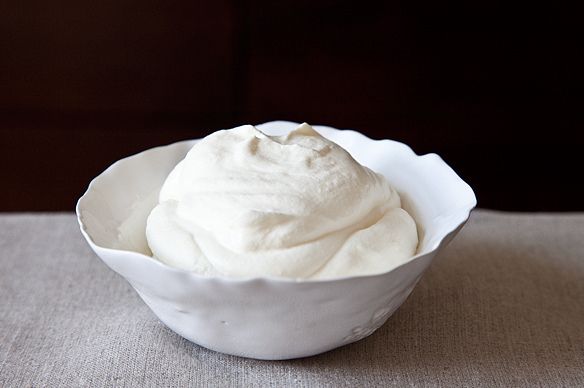 Now is the time to talk of whipped cream -- before the last stone fruits of summer disappear, and we can still have a hurrah or two with plum cake and nectarine slump.

But it's also high time we armed ourselves for the next few months of apple and pear pies and crisps. We're going to need a lot of whipped cream. 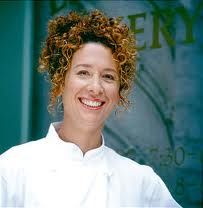 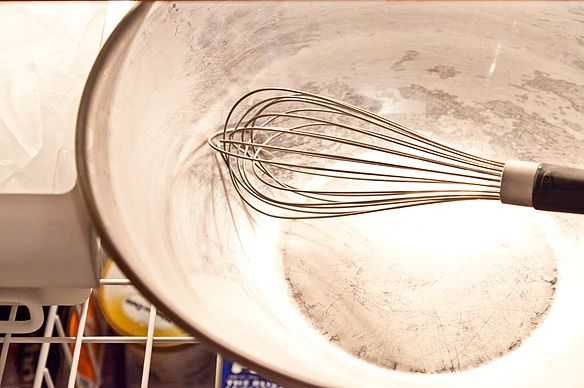 Of course homemade is always better than anything squirted out of a can -- and almost as effortless -- but we still tend to worry over it. Because overwhipping the last pint of cream in the house, or seeing perfect tufts collapse into puddles, can feel as if they might lead to our undoing. It's a good thing Nancy Silverton, L.A.'s most beloved pastry chef, has our back.

In her 1997 cookbook The Food of Campanile, Silverton walks us through her foolproof methods, both by hand and in an electric mixer, and tells us how to salvage the overwhipped stuff -- but the biggest coup is in the simple way she resolves that pesky deflating issue, freeing us to whip cream hours before dessert without worry.

Others have tried all kinds of ways to shore up whipped cream. Gelatin is common, but tricky. Rose Levy Beranbaum likes cornstarch. There's a "Never-Weep" recipe bobbing around the internet that swears by instant vanilla pudding. Shirley Corriher has even been known to whip a melted marshmallow (a ready source of gelatin) into hers.

But Silverton's technique wins big points for taste -- in fact, you might already be doing it, just because it tastes good. She mixes in a modest scoop of crème fraîche, which not only breathes tang and depth into plain whipped cream, but makes it more resilient too.

How? A few factors may be at work in cultured cream's clumpier protein bundles and natural emulsifiers, but the true hero is clear to me (and Harold McGee): straight-up butterfat.

You see, the only real difference between heavy cream (which, at 30% butterfat and higher, will whip admirably) and milk (which won't) -- is the fat. Fat globules are sticky and sturdy, capturing and cloaking the air bubbles that are whipped into them. And crème fraîche tends to have even more fat globules than heavy cream.

Though McGee cautions that liquid with 30% butterfat is ideal for whipping -- too much fat will eventually weigh down and collapse the fragile house of bubbles -- here, we get a pass. It turns out that swirling in just a bit of smooth, glossy 42% butterfat crème fraîche after the cream reaches soft peaks is just right for adding one last protective layer to the architecture of a pudgy pile of whipped cream.

So now the only question is -- why wouldn't you just lace every batch of whipped cream with crème fraîche? Don't forget: the countdown to pumpkin pie is on. 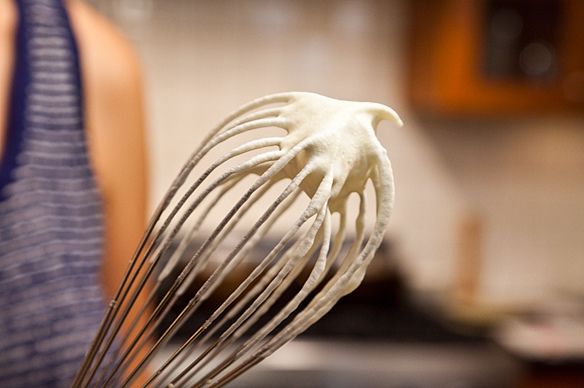 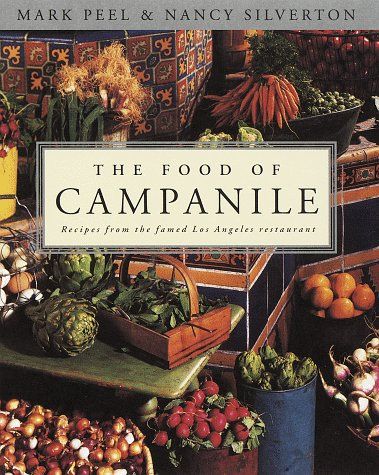 From The Food of Campanile by Mark Peel & Nancy Silverton

The addition of a little sour cream or crème fraîche to every cup of whipping cream will ensure that beautiful sheen, extra smoothness, and fuller flavor.

William F. September 22, 2017
whip the cream using a little powdered sugar and put in a strainer lined with cheese cloth over a bowl in refrigerator, all the wey will go to the bowl and the cream will last, it seems forever

djgibboni March 27, 2017
Cream cheese is another good choice. The gums used to make cream cheese will go a long way towards stabilizing the cream. Adds a nice flavor, too.

Terri April 9, 2016
I made some a few days ago with a couple tablespoons of coconut cream - made great whipped cream and held up beautifully.

kfh April 5, 2015
I suppose you could also use clotted cream if you have it on hand... I think it's 55% butterfat. Keeps longer than creme fraichefraiche.

Donna Y. October 6, 2011
Ahhh, sheer perfection! I love whipped cream but I know I will adore this version because of that tiny bit of tang the creme fraiche will add. (And then the added benefit that the whipped cream stays lofty, merveilleux!

lkcooks September 23, 2011
I have often mixed Mascarpone with heavy cream when whipping it & it works like a dream to let the whipped cream keep. Also if one uses pasteurized & not ultra pasteurized whipped cream it whips up much more quickly & seems to hold longer. This creme fraiche idea sounds great as well!

Soozll September 23, 2011
I've addad a heaping spoonful of mascarpone cheese to heavy cream before whipping it and it holds up for days! But I don't always have mascarpone, so I'm happy to see that this works, too. I've often wondered if whipping sour cream would work but never tried it. Thanks for featuring this.

MissGinsu September 22, 2011
Love it! Thanks for this! Best addition to whipped cream since vanilla extract.

Alanna K. September 22, 2011
I think of cream whipped with sour cream as "Swedish Cream" -- after learning to make it this way while living in Finland many years ago. I often add a pinch of cardamom or another spice too.

Lillbet September 22, 2011
I used Cook's Illustrated's method and the best thing about it is it doesn't require an extra pricey ingredient- just freeze bowl and beaters before whipping. Beat 1 cup heavy whipping cream,1tbsp sugar, and 1tsp vanilla for 30 seconds on low, until bubbles form; the 30 seconds on medium until peaks start to form; then 30 seconds on high until you're satisfied with the stiffness of the peaks. Keeps 8 hours in the fridge in a strainer. Took mine to a picnic in an insulated bag and after about 2 hours the cream was still thick and delish. Once I screwed up the time and went for 30 seconds on low and 90 seconds on medium and it was still perfect! So thanks, but I'll stick with my method. :)

judy December 10, 2014
I like this. I was wondering about the expensive ingredient as well. I really have no use (I know there are about a million) in my world for the creme fraiche. Tried it once and wasn't impressed enough to pay for it. I use CI's method as well and there is nice whipped cram for pumpkin pie for breakfast then next morning--oh don't you make enough pumpkin pie for breakfast the day after Thanksgiving?! A must in my household!

Steve2 I. September 22, 2011
I've been doing this for years, didn't know it was Ms. Silverton's trick. I also use brown sugar and a shot of scotch to make this butterscotch flavored. Really outstanding with sweet potato or pumpkin pie.

witloof September 22, 2011
Been doing it this way since reading about it in Mr. Latte, and agree with Amanda's original assessment: "Two cups of bliss."

JSCooks September 22, 2011
Tangy Whipped Cream made with creme fraiche (I go half and half) is one of two "master recipes" at the start of Farmers' Market Desserts. Much more character than plain whipped cream. It's easy to make your own creme fraiche and much less expensive than buying it -- just add 2 T creme fraiche, cultured buttermilk, or plain yogurt (with active cultures) to 1 cup of heavy cream in a clean glass jar, shake, and leave at room temp for 24-36 hrs, checking every 8 hrs or so. You'll see and taste when it's thick and tangy, and it thickens further in the fridge, where it can last up to 2 weeks.

allyeats September 22, 2011
Do you think full-fat Greek yogurt would stand in well for the creme fraiche?

Kristen M. September 22, 2011
Flavor-wise, definitely. But it looks like Fage Total Greek yogurt is only (only!) 10% fat, so it won't have quite the same holding power as creme fraiche or even heavy cream. However, the yogurt whipped cream in this Pavlova recipe works well and is delicious (it just doesn't hold long): http://www.saveur.com/article/Recipes/Pavlova

allyeats September 22, 2011
Do you think full-fat Greek yogurt would stand in well for the creme fraiche?