Today: Perfect pumpkin pie in half the time. 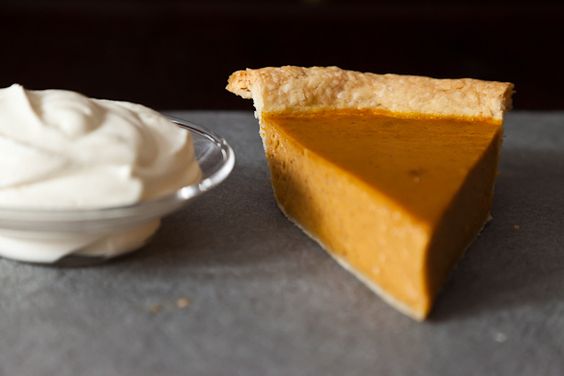 At a recent photo shoot, a few of us were standing around lamenting that we don't have a go-to pumpkin pie. Or that our go-to is so involved that it's more akin to an awkwardly choreographed square dance, and stresses us out and furrows our faces just reading it. Feast day recipes shouldn't require memorizing three steps ahead for success -- it won't end well (and so on with the lamenting).

Then along comes Amanda's mother Judy Hesser, an untouchable cook (we're talking Chocolate Dump-It Cake and Peach Tart untouchable). She casually said she was fond of an old recipe that has you cook down the pumpkin to caramelize it. 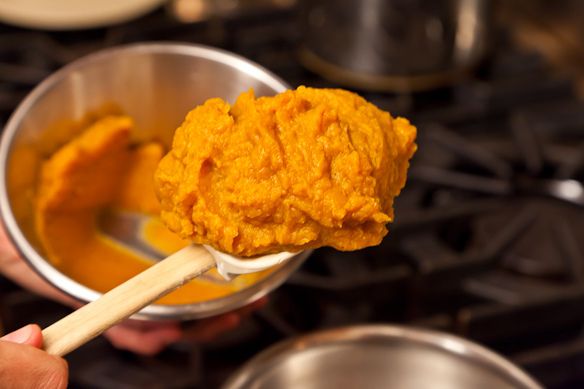 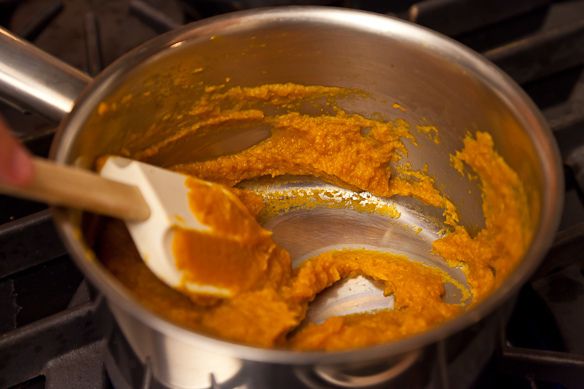 That alone was enough to sell me -- it sounded like a pie with guts, that wouldn't just sit there phoning in the pumpkin flavor, and burying it under lots of spice. But when I made Amanda dig up the recipe -- in the two-volume gem Meta Given's Modern Encyclopedia of Cooking (the overlooked step-sister of The Joy of Cooking and Fannie Farmer) -- the genius of the recipe was much more than that. 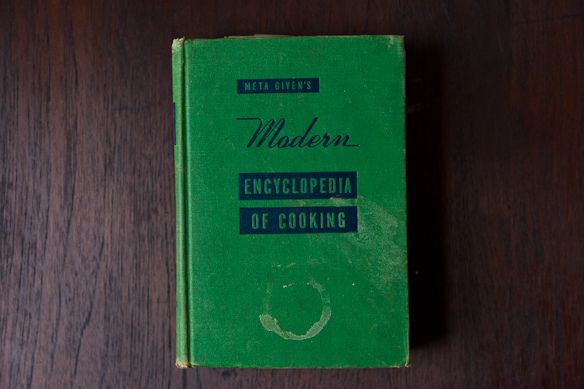 You don't have to blind bake the crust. You use real milk and cream instead of evaporated milk, with predictably way-better results. And because you blast it at 400 degrees the whole time, it bakes in 25 minutes -- less than half the time of your average back-of-the-can recipe.

Are you thinking, "But it's a custard pie! How can it sustain such abuse?" I told you this was a pie with guts. I credit the cream, and the chilled pie shell.

A few words of caution -- if your crust is rolled especially thick, or your pie dish is glass instead of tin, or you loathe underdone bottom crust, you might still want to blind bake it a little. But if none of these apply, you (and your bottom crust) are golden. 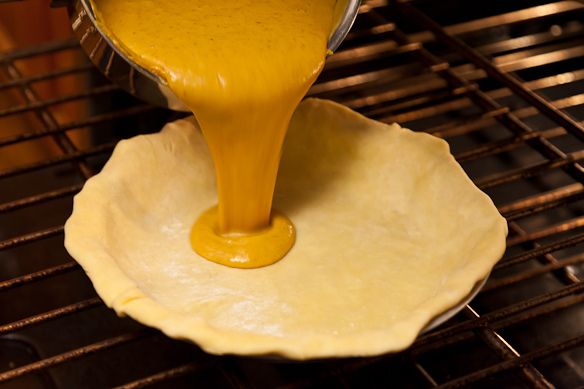 Caramelizing the pumpkin doesn't stick to the dry saucepan like you may worry it will (it's moist enough that it basically keeps deglazing itself -- that's real science). And it does everything you'd hope for the flavor -- pumpkin, and proud of it.

The creamy custard base puts this pie less in the league of its sturdy-jiggly evaporated milk brethren, and more on the way to a regal chiffon mousse (without the gelatin and whipped egg whites and fear). Which means at the end of all the Thanksgiving brouhaha, you may only want a small slice, and you might not even need the whipped cream (but make sure you have a bowlful, just to be safe). And -- oh well! -- that just means more left to eat cold for breakfast on Friday. 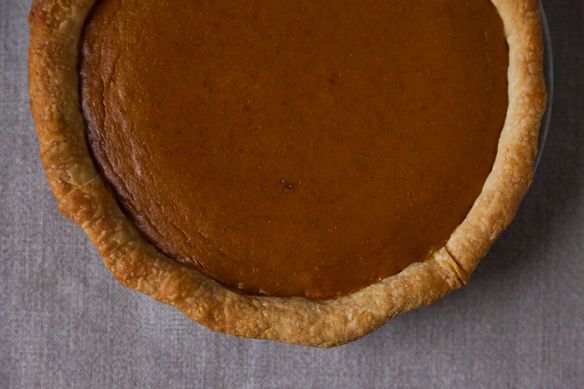 Vivienne November 22, 2015
The two volume Meta Given's cookbook I have belonged to an aunt who made many notes over the years. It is a cherished heirloom for the aunt who was Martha Stewart before Martha Stewart in everything from cooking to crafts, to creativity in entertaining.

gwimper November 3, 2013
If chilling the pie crust and adding it to the hot oven in a Pyrex pie plate wouldn't it crack?

gwimper November 3, 2013
I have baked pies before and it hasn't cracked but I have never baked a pie higher than 350. Usually I chill the pie plate with the crust...

Rachel C. November 2, 2013
I just baked this pie in a 9.5-inch glass pan using all half-and-half instead of cream and milk, and the pie turned out perfectly!! There are no cracks on the surface, and it took 45 minutes at 400? (although I'm sure I could have taken it out at the 40-minute mark).
I've never made pumpkin pie before and I'm so excited at how easy this recipe was! My house smells delicious, and I can't wait to share it with my friends tomorrow :)

Stokelyworks February 23, 2013
In case anyone is interested, I have a Feb. 1953 12th Printing edition of Meta Givens Modern Encyclopedia

Latetotheparty January 31, 2012
Made this for the holidays and it lived up to its title - Genius Recipe. I don't even like pumpkin pie, but, loved this one. Thanks for sharing.

ejm December 1, 2011
This was wonderful, it looked great and tasted better. Thanks!

freshparsley November 26, 2011
Wonderful recipe! We baked this on Thanksgiving morning and had a perfectly iconic pumpkin for dessert.

JadeTree November 25, 2011
Tremendous success! The pumpkin pie lovers were silent with rapture and the non-lovers kept raving about how this pie converted them to the cause. This is now The Pumpkin Pie for winter holidays.

I did use a glass plate but did not blind bake. The pie took 35 minutes in my measly electric oven, but that gave me more time to dress whichever child was to hand. The crust turned out perfectly cooked on the bottom, nether underdone nor burnt. Thrilling!

Sheilad2000 November 24, 2011
I made this yesterday -- YUM. I was using a glass pie plate so I blind baked the crust for about 10 minutes as suggested. It was done in 25 minutes and was perfect!

lapadia November 24, 2011
This pie sounds wonderful, and what a coincidence that I happen to have this cookbook shown in your article, (a hand-me-down), and my pie crust is mentioned, too! Thanks for the shout out Kristen. I'd like to add (for future purposes) that I have a Food52 link specifically for the crust mentioned, as well, there is a link with Dorie Greenspan making it. The links are below. The crust recipe is enough for 2 single crust pies or one double. Wow, the Holiday season is officially here, Happy Holidays to all!

drbabs November 25, 2011
lapadia, i use your crust all the time. It is so delicious and flaky and it rolls lout like a dream. I used it for apple and pumpkin pies yesterday and it was wonderful. Thank you for a great recipe.

linzarella November 24, 2011
Made this yesterday and it came out perfectly. Used a ceramic pie dish and after 25 minutes, it was perfectly set. Can't wait to eat it today!

Kathy C. November 24, 2011
Will this recipe work as well if you use sweet potato canned mix?
Author Comment

Kristen M. November 24, 2011
I've never used sweet potato canned mix, but if it looks like the orange puree in the photo above, it's probably fine. If it's already sweetened and spiced you should probably skip the sugar and spices in the recipe or only use them to taste.
Author Comment

Kristen M. November 24, 2011
I've never used sweet potato canned mix, but if it looks like the orange puree in the photo above, it's probably fine. If it's already sweetened and spiced you should probably skip the sugar and spices in the recipe or only use them to taste.

pontius06 November 23, 2011
Could you use honey or maple syrup in place of all (or even some) of the sugar?
Author Comment

Kristen M. November 23, 2011
It could be a tricky swap, since the moisture and acidity of maple and honey are very different from granulated sugar. I tried another version of this pie with brown sugar and it worked well, however. If you want to substitute for one of the more liquid sugars, you'll want to decrease the milk and/or cream -- here are some good guidelines: http://www.ochef.com/91.htm

EmilyC November 23, 2011
So glad you posted this recipe! My go-to pumpkin pie for about 5 years has been from King Arthur. It's actually very similar to this recipe with the additions of brown sugar, nutmug, cloves, and a little black pepper. I've always loved it because of the cream (instead of evaporated milk). I'm going to combine it with this recipe because I LOVE the idea of caramelizing the pumpkin! Can't wait to try it with a heaping dollop of Genius whipped cream!

cfelten November 22, 2011
I'll be using this technique to make some pumpkin scones that are on my to do list.

For Miche's question about refrigerating the pie if it's made the day before, yes, please refrigerate egg and milk-based dishes if they are not going to be consumed within a few hours of prep. Think of it this way - would you leave your creme caramel or quiche sitting around at room temperature for 18-24 hours before serving? Probably not. Safety first!

AntoniaJames November 22, 2011
Thank you for discovering and posting this! I can tell from the recipe that it is, truly, genius. So looking forward to making this! ;o)

Miche November 22, 2011
Query: Does pumpkin pie has to be refrigerated overnight if made on Wed?
Author Comment

Kristen M. November 24, 2011
Hi Miche -- sorry we missed this question! I'd recommend refrigerating it overnight, but other commenters have said they just keep it in a cool part of the house and it's fine too.

Miche November 22, 2011
Looks great. Similar to our family recipe (i.e. ginger and no f***ing nutmeg, but made with 1/2 and 1/2 and brown sugar, and with the addition of a tad of apple cider and brandy.) I will definitely steal the idea of cooking down the fresh pumpkin as the only flaw in our recipe is that it tends to come out a little watery sometimes. Thanks.

jenniebgood November 22, 2011
I just came across a recipe in Joanne Chang's Flour cookbook last night that also provides directions for cooking down the pumpkin as well...love this idea! I'm thinking about pairing it with a recipe for a pecan crust (found on the Whole Foods website (http://www.wholefoodsmarket.com/recipes/3095?utm_source=Responsys&utm_medium=email&utm_campaign=2011_11_21_Recipe).

RonaMoser November 22, 2011
This is the first recipe for pumpkin pie I actually want to make!!!! Genius indeed!