Today: Your everyday duck confit -- all you have to do is skip one big fat pricey ingredient. 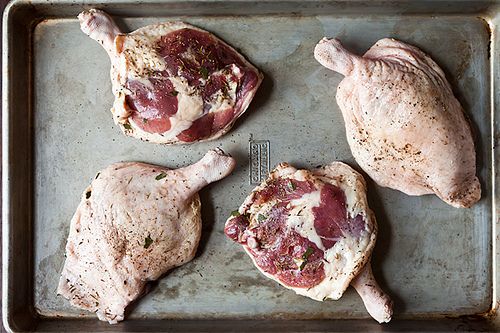 This is not the confit they teach in cooking school, or the kind served at restaurants. It's the kind you can make anytime -- all you need are a few good duck legs, a skillet, and some very basic spices. And it's just as good.

Confiting duck, technically, is just a matter of salting it long enough to draw out its water content, then preserving it by replacing that water with fat. Traditionally this is done by simmering the salt-cured legs in a big burbling vat of duck fat, which you are expected to already have.

It's not terribly hard to come into a bunch of duck fat. Slow roast two ducks and you'll have the two quarts of fat a standard confit recipe might require, easy. Or you could buy it retail in tiny containers. It will cost you an extra $50 or so and you will feel a little silly (or, you know, there's always this bucket).

But all of these demand a significant head start, one that food writer Melissa Clark skips right past, by exploiting the natural gobs of fat that come free in every duck leg. Her trick: Just render that fat out first. It's not traditional, but who cares? 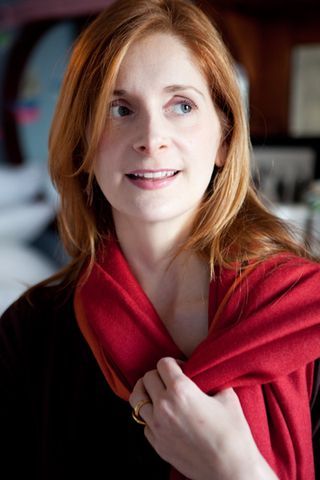 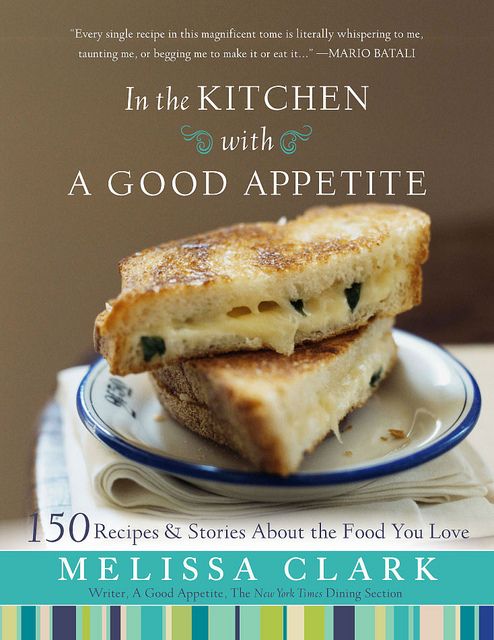 This is the most obvious perk of Clark's method, which she developed after feeling inhibited by this whole vat-of-duck-fat requirement and consulting with Eric and Bruce Bromberg, chef-owners at Blue Ribbon. But there's even more to its genius than this.

For example, you might think the recipe doesn't call for nearly enough salt: a teaspoon and a half -- barely enough for a subdued sprinkle on each side. But it's portioned deliberately, so that you don't have to rinse the excess salt away at the end of the cure stage as you would in many traditional confits. This is doubly good, because the cure stage leads right into the sear-in-a-hot-pan stage, which is much more fun without water and fat spitting angrily at each other.

You'll sear away until you've collected about 1/4 inch of pooling fat in the bottom of the skillet, then you'll flip the legs, cover the pan with foil, and shelve it in the oven for a few hours, covered for most of the time. The lingering fat on top slowly trickles down into the meat, leaving a crackly sheath of skin behind, while the underside stays submerged.

Another bonus of this technique: you don't have to monitor the temperature with a deep-fat thermometer. A modest layer of fat in a heavy skillet at 325°F mostly babysits itself. (Another thing that babysits itself? A slow cooker. But I digress.)

When it's done, the duck will be golden and gorgeous, with jewels of dark luscious meat and a crisp-paper skin to put the best roast chickens to shame. Clark recommends serving with roasted potatoes, noodles, or bitter salad greens. But you should count on being down a leg or two, if you are weak of will (and/or unsuccessful in fending off trespassers, who will just stand there stony-eyed, gnawing on a leg over near the sink like a dog).

So for anyone who thought this was only the stuff of fancypants restaurants or roadside inns in southwestern France, consider this your starter confit -- one that you can make anytime you spot a nice set of legs at the market. Clark's simple dried thyme and bay cure is a good baseline, to be fiddled with later as you see fit (try star anise, dill, or coriander).

And on top of confit, guess what else you get? Duck fat! And lots of it. Stick it in the freezer so next time you're feeling proper, you can try confiting the old school way. Or forget the old school way, and use it all up: fry potatoes, sauté greens, work it into tart crusts, and smear it on your toast. 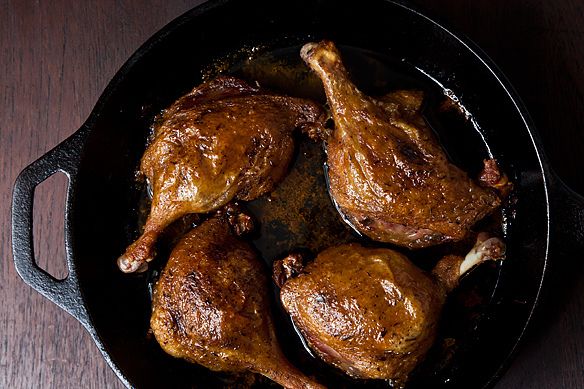 Adapted very slightly from In the Kitchen with a Good Appetite (Hyperion, 2010)

(As you may know, we're big on both salting early and long-cooking in ample fat around here.)

Eatentions January 6, 2015
Made this last week! Simply DELISH! I had duck fat in the freezer and I ended up cooking it for 1 hour covered and 45 minutes uncovered and it was PERFECT! YUMMMMMM

Benny May 9, 2012
clever clever. I've been using the same batch of fat (kept in the freezer) for multiple batches of confit. However, my product is getting saltier, and I fear that I have to make another hefty purchase of fresh duck fat.

mvangraaf March 9, 2012
Can I prepare this ahead? As in mid-afternoon? And then finish cooking/achieve crispy skin just prior to serving? How about potatoes cooked in that duck fat?????

mvangraaf March 9, 2012
I made this and it was delicious! Would like to serve to group at dinner. How can I prepare this ahead? How far ahead? Mid-afternoon? And then finish off......getting crispy skin......just prior to serving?
Author Comment

Kristen M. March 9, 2012
So glad you liked it! You could certainly make ahead -- mid-afternoon would be fine -- and either heat up in the oven or by searing in a skillet with a bit of the fat (or a combination -- sear, flip, roast in the oven till warmed through). Also, with all that duck fat, you might consider Nigella Lawson's roasted potatoes.
Author Comment

Kristen M. March 9, 2012
So glad you liked it! You could certainly make ahead -- mid-afternoon would be fine -- and either heat up in the oven or by searing in a skillet with a bit of the fat (or a combination -- sear, flip, roast in the oven till warmed through). Also, with all that duck fat, you might consider Nigella Lawson's roasted potatoes.

mvangraaf March 9, 2012
I made this and it was delicious! Would like to serve to group at dinner. How can I prepare this ahead? How far ahead? Mid-afternoon? And then finish off......getting crispy skin......just prior to serving?

MTMitchell February 6, 2012
I made this yesterday. We couldn't find moulard duck legs (I probably didn't look hard enough) so we made it with what the butcher shop had, and it was crazy good. We served it over homemade pasta...full disclosure: I made enough for there to be leftovers that I had planned to freeze and be able to use one night next week or something, but we ended up, shall we say, snacking on it all evening. It was wonderful, and I will for sure be making it again, probably when we have guests, and I will probably let them think that I didn't do the confit the "genius" way!

ChefJune February 6, 2012
What a great idea for getting enough duck fat! I'm doing that this week!

SKK February 5, 2012
Kristen, I love what you come up with! Love your research and am most grateful for your seemingly "dodgy career choices".
Author Comment

AntoniaJames January 30, 2012
I made this yesterday. It's absurdly easy. I plan to use the bay + thyme dry brine, which is simply divine, on my next roast chicken. Dinner tomorrow: shredded duck on hot-off-the-griddle roti, with the citrus slaw from the pork taco recipe featured in the Jenny's in the Kitchen piece today, and a touch of hoisin sauce (homemade from the Crispy Duck Pancakes recipe posted here on FOOD52 by grantacus). ;o) P.S. I made the duck at the same time that I made Nekisia Davis' granola, as I always like to cook at least two or three things at once when I have the oven on. My house smelled wonderful, as you can imagine.

greenbeanalmondine January 29, 2012
would be great if it was printable...

CarlaCooks January 30, 2012
I didn't have any trouble. Go directly to the recipe (http://food52.com/recipes/15892_melissa_clarks_really_easy_duck_confit) and there is a little print button on the left side of the screen.
Author Comment

Randy-in-Paris January 29, 2012
This looks like a fabulous recipe. I live in Paris part-time so can easily get confit de canard in most grocery stores in Paris, in particular "Picard" (frozen food store), which are excellent. I heard about using different oils to substitute duck fat, but it sounds so so messy and what am I gonna do with all that left-over oil. So, this recipe sounds a god-send for when I'm in US and missing confit! Merci beaucoup!...
Author Comment

Kristen M. January 30, 2012
Lucky you! Is confit de canard priced reasonably at stores like Picard? Here it's a bit of an extravagance.

Randy-in-Paris January 30, 2012
Funny you should ask, I just returned from Picard, it's across the street from where I live. It costs about 7€ for 2 cuisse du canard (2 thighs/drumsticks). Alot of people will use the "canned" ones from Monoprix or Carrefour, which always surprises me, but I think it's more for the rendered fat more than the duck itself, cause it falls apart really easily and tastes mushy. You can buy the fat here inexpensively though in much more reasonable sizes, and we use it to flavor cassoulets or even just plain old fries. I use it for stir frying vegetables... FYI..., you can bring it back with you to US since it's either canned or bottled.

JuliaB January 29, 2012
What a genius technique! I've always been intimidated by duck confit but will definitely try this method!
Author Comment

Trillinchick January 29, 2012
I once purchased duck legs at Whole Foods in Berkeley. Once home I stuffed them in the freezer pre-investigation, then felt so overwhelmingly frightened about duckness, fat, rendering, confit, crispy skin, time et al. Since duck appears more on menus (Piedmont's Bay Wolf specializes, and Chez Panisse in Berkeley serves) this seems the right recipe to give it a go. Just remember, this may be for duck, but I'm still a little chicken! Trillinchick. ;-)
Author Comment

Kristen M. January 30, 2012
There's no chickenness of any kind with this recipe.

haeema January 29, 2012
We raise our own ducks. A friend GAVE me 3 ducklings, another lady gave me 3 grown ducks, and I have bought 2 Peking drakes. We now have 11 grown ducks. We LOVE the fresh eggs (Duck Eggs Benedict) we get daily. I was looking for a recipe for the duck itself without all of the extreme cooking. Well, now I have found it! We have 2 young drakes that we will butcher in the early spring and this will be the 1st recipe I make!

By the way, we are on a very fixed income and enjoy such a rich life with our small hobby farm.
May YaHuWaH bless you all!

Hilarybee January 29, 2012
I love this recipe. In the kitchen with a good appetite is one of my very favorite cookbooks. Incidentally, Nekisa Davis' Olive Oil Granola is also included in Melissa's Good Appetite.
Author Comment

Shazza January 28, 2012
I can hardly wait to try this. Thanks.
Author Comment

arielleclementine January 27, 2012
i'm so excited to try this! thanks for the recipe!
Author Comment