UPDATE: Jim Lahey's new book My Pizza hit shelves last week (read on below for his no-knead pizza dough recipe and why we love it). To celebrate, Clarkson Potter is giving away 12 copies of the book to our readers!

To win a copy, just tell us your dream pizza topping combination in the comments below by Monday, March 26th at noon EST. (For example, Lahey likes things like walnuts and shiitake; Thai eggplant and bonito flakes -- go wild!) We'll pick 12 winning pizzas that wow us and make us hungry.

We have winners! Congrats to za'atar, gingerroot, freida2020, bebe le perche, Carly DeFelippo, MandT, seasonalfeast, PepLV, yenyen, Burf, Amypineapple,and Heena -- we'll be emailing you to collect your addresses, and then My Pizza will be yours! Thanks to everyone for sharing your dream pizzas. You succeeded in making us very, very hungry.

The no-knead bread revolution finally comes to pizza -- and it's even more revolutionary. 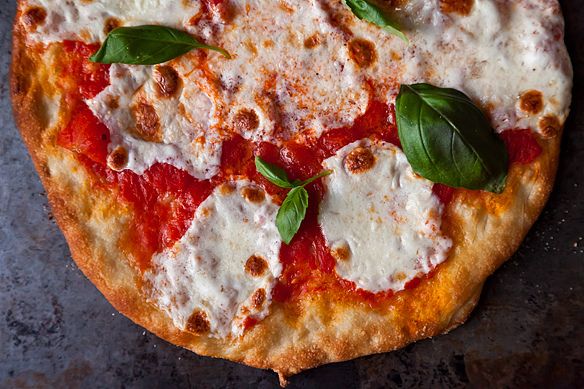 The internet got its first viral recipe in 2006, when Mark Bittman brought Jim Lahey's technique for No-Knead Bread to light in the New York Times. (It proved far more useful than the Bacon Explosion, the internet's second viral recipe.)

Not-kneading tore through the blogosphere and, unlike the Explosion, it stuck -- seeding something of a revolution. (Have you tried it? I bet you have!) 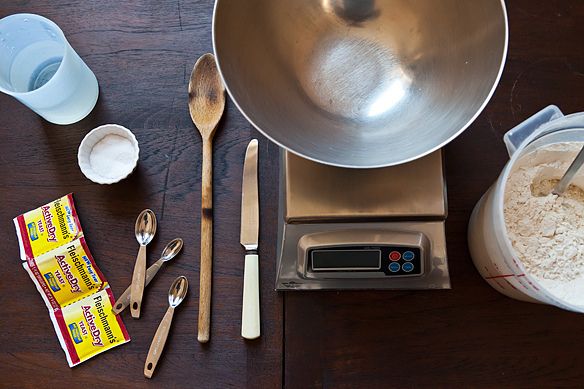 Its instant and lasting popularity is not because kneading is so strenuous (it'll never cramp your biceps like whipping egg whites will), but because it requires an understanding. You must form a relationship with your dough, find your rhythm, and sense when it's feeling too dry, or leathery, or loose (and how to fix it).

These are worthy and satisfying pursuits, but they give cooks enough pause that bread-baking was once reserved for dedicated hobbyists. People even got really into bread machines there for awhile, which happily seem to have gone the way of the milkshake mixer and the grapefruit knife. 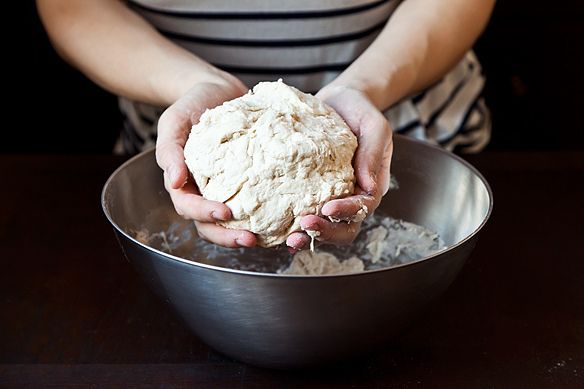 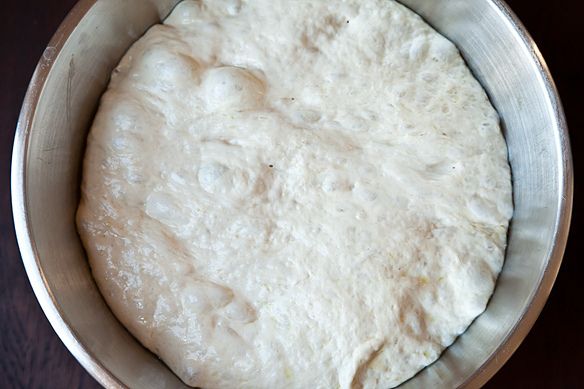 So when Bittman urged, "Let time do the work," we listened. And he wasn't kidding -- after mixing up your flour, salt, yeast, and water, you just flop the dough around a couple times and wait till it's time to bake. 18 or so hours and a smidgen of yeast will have done all the rising, relaxing, and gluten-forming for you.

And thus Bittman and Lahey brought homemade, machine-less bread (and confidence) back to the home cook. But still, Lahey's pizza dough was a different animal -- it used a lot more yeast for a short, furious rise. Slowly developing nuanced flavor in his crust wasn't a priority to him when My Bread came out in 2009. Back then, he was using the dough Roman-style at Sullivan Street Bakery, as nothing more than a thin, crackery base for more flavorful layers of toppings like shaved cauliflower and green olives. 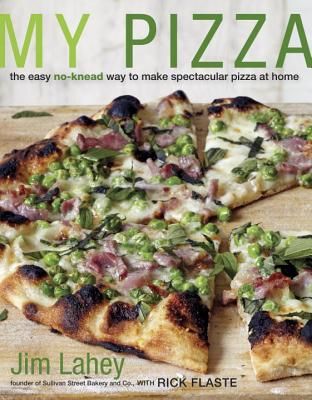 But ever the mad, tinkering genius, he couldn't stop there. In late 2009, he opened the elegant pizzeria Co. and, this March, he's releasing a new book called My Pizza, with a newly refined version of his classic long-rise, no-knead technique. "The lesson here is understanding that without fermentation the dough won't be that interesting," Lahey explains. He even extensively walks us through tricks for getting good pizza from electric ovens, oddly placed broilers, etc. (Hear that, Steingarten?)

Not-kneading pizza is even simpler than not-kneading bread, if you can believe that. You just mix your dough together the night before your pizza party, leave it in a warm spot to bloat into a slightly tacky mass, then stretch it into fragrant, bubble-pocked disks. Like his bread, it's the wet dough that makes for a steamy, puffed interior with a chewy, crackling surface. It may or may not make round pizzas, but Lahey doesn't care.

From this noble base, the book is filled with curious toppings that are streamlined and smart -- not California-style wacky for the sake of wacky. Charred thai eggplant is garnished with bonito flakes, clumps of shiitake top a walnut onion puree, and, in the Popeye Pie, three cheeses are tucked beneath a mountain of spinach leaves.

And then there's his pepperoni, which he says "has caused servers at the restaurant untold moments of awkwardness" as they're forced to tell customers that this pizza has none of the pepperoni they know, only red pepper puree (salted with fish sauce!), lamb merguez, mint and pecorino. He's not a liar, he's just being literal. Pepperoni means peppers.

If we revolutionaries have learned anything from the internet, it's that we'd best listen to Jim Lahey. He'll probably be bored by us, but here we went with his classic Margherita Pie, and it was awfully good. 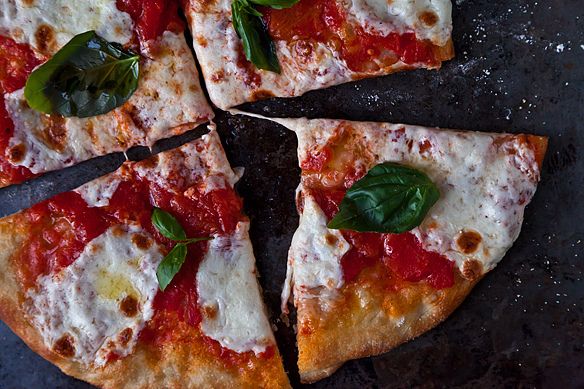 Note: The recipe as published doesn't recommend freezing the dough. However, when asked about this, Lahey alluded to other, more advanced biological capabilities we have in freezing, and as such pizza dough should present no problem.

Assembling and Baking the Margherita Pie:

The T. March 23, 2017
How would you adjust the recipe if using a sourdough starter in place of the active dry yeast?

daisybrain March 27, 2012
Based on the dough split I'm assuming these proportions will make about 4 12" pies. Can't wait to not knead my dough although my standing mixer does most of it for me anyway. What I'm looking forward to here is the flavor the fermentation will give. In our family our two favorite pies (so far) are caramelized onions, smoked mozzarella and oil cured olives and fontina with browned mushrooms and truffle oil.

Collin J. March 27, 2012
Bacon, Fruit(pineapple or some other) and hamburger!

ibbeachnana March 26, 2012
Wow, too bad we have to get exotic, I prefer a more traditional pizza such as Pizza Margherita as wild as I prefer to get is using pancetta or prosciutto for a topping, always homemade sauce and fresh basil, but I have made a flatbread shrimp and hummus a la Ben Ford that was wonderful, but not sure how it would work for a thicker crust pizza. I made the dough recipe when it was first posted here, nice and in my keeper pizza dough folder.

wendyagogo March 26, 2012
For a wild ride of a pizza- Tomato sauce (I use arrabiata) , mozzarella or Italian 4 cheese blend, a few anchovies, spicy capicola, diced pancetta, jalapenos, & pineapple- it's delish...& I'm not even pregnant.

The F. March 26, 2012
There are two pizzas I have really fell in love with over the years. The first pizza is topped with extra virgin olive oil, pancetta slices, dinosaur kale (that is sauteed in the pancetta grease and garlic cloves), fresh mozzarella cheese, and organic red grapes. And my second favorite pizza is topped with Walla Walla sweet onions, cremini and baby bella mushrooms (all three are sauteed in extra virgin olive oil and garlic cloves) and topped with a herbed goat cheese like chevre Capri.

cookiecakes March 26, 2012
I love a fresh basil, tomato, mozzarella pizza- with the veg and herbs straight from the garden!

Vivilicious March 26, 2012
Thin crispy chewy crust please. Then a smear of tomato sauce, italian hot sausage with lots of fennel, spinach, mushrooms (any mix ok) with taleggio. Or tomato sauce, grilled thinly sliced eggplant, mozzarella and when it comes out of the oven, hit it with parma ham, rocket and shave parmesan, yowzah!

cmazzalina March 26, 2012
I like it simple: the dough drizzled with a little olive oil, no sauce, crushed red pepper, and mozzarella. When it comes out of the oven, I toss some arugula with a quick dijon vinaigrette and pile it on top - yum!