Liyna and Anum's Big Feast: All About the Hyderabadi Biryani

All week, we'll be featuring recent college graduates and longtime friends Liyna Anwar and Anum Arshad as they plan, prepare, and host a backyard South Asian-inspired feast for their mothers.

Today: Liyna prepares -- and meditates on -- the Hyderabadi biryani. This is the third post in their Big Feast -- check out Shopping for Spices and Building the Tandoor Oven. 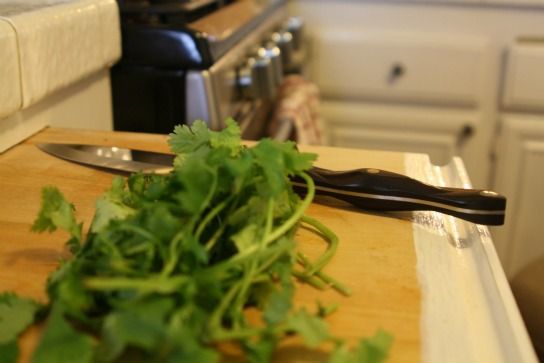 I feel like I have a lot of responsibility to accurately present biryani to all of you readers out there. It may seem silly that I feel like a thousand glaring eyes are on me, waiting to pounce if I say something wrong, but that’s how serious biryani is to Hyderabadi people! Everyone has his or her special family method of doing it, yet at the same time there are some standard features that most Hyderabadi biryanis have. And because it’s often served at parties, weddings, and other special occasions, biryani also symbolizes celebration, togetherness, and quite fittingly, a big feast.

All biryanis are great but there are a few things about Hyderabadi biryani that make people go, well, crazy. One thing that people always comment on is how every grain of rice seems to be imbued with so much meat flavor. That is a result of the cooking technique. Unlike most other varieties where the meat is cooked first, in Hyderabadi biryani you cook the raw marinated meat and par-cooked rice together in the oven. So as the meat is cooking, the juices release themselves into the still-absorbant rice. Another difference is the combination of spices. Some biryani varieties are strong and spicy or use a colorful mix of vegetables. But true Hyderabadi biryani uses a subtler mix of ingredients – people love it for being bold, but elegantly aromatic. However, to try to explain every intricacy of biryani in one simple post would be superficial (at best) and could get me some serious hate mail (at worst). That’s why I’m going to speak about what’s relevant to my experience with Hyderabadi biryani – some secret techniques, some pivotal steps, and what it means to me.

Ever since I was little, I have loved biryani. I understand that all desi people love biryani, but I love biryani. I would wait anxiously for the days my mom would make the garlic-ginger paste, filling the kitchen with a pungent aroma. Since the first step in marinating the meat for biryani involves rubbing it with that ginger-garlic paste, biryani was already destined to be one of my all-time favorites.

My mom is the one who taught me how to make Hyderabadi biryani and although I’m nowhere near an expert, I am slowly getting the hang of it. The time I make it for the Big Mother’s Day Feast, though, will be the first time I will make it on my own. (And I know everyone says this, but my mom’s biryani is the best. I will have a tough crowd.)

Here are some of the main ingredients (I cant give them all away! Some are secret!) that go into Hyderabadi biryani. We use onions, lemons, full fat yogurt, ghee (clarified butter), garlic-ginger paste (please just make this fresh!), and cilantro (Indians use the leaves and stems).

As for the spices, cinnamon sticks, cardamom pods, saffron, cloves, and caraway seeds all go into a spice grinder (you can also use a coffee grinder) and then into the mixing bowl with the raw chicken and other ingredients. Chili powder, turmeric, salt, and fried onions all go in the marinade, too. About the fried onions. In Indian cooking, fried onions are made by placing very thinly sliced onions in hot vegetable or canola oil and letting it cook down past the stage of caramelization – you cook until the strands are dark brown! It seems like they are burnt, but if you do it correctly, the end result is a deep, sweet onion flavor. There really isn’t an exact flavor comparison in American cooking and it plays a major role in how biryani tastes. After you let the finished fried onions dry off on some paper towels, you crush them up into a coarse powder consistency and add them to the chicken marinade. 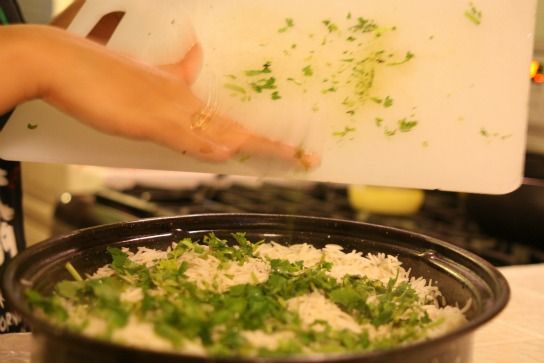 After the seasoned chicken goes in a casserole dish, it’s time to prepare the rice. My mom says that cooking the rice is probably the most important step because it’s the easiest to mess up. In Hyderabadi biryani, the rice needs to be par-cooked before you add it on top of the casserole dish. If you par-cook it too much in the water, by the time it comes out of the casserole, the end result becomes mushy. Too little, and you’re left with hard rice. It’s all in the timing.

Wrapping the casserole with foil and then covering it with a lid may seem redundant, but trust me – it’s not. That extra tight seal is what really locks the flavors in and allows all the components to mingle and become one cohesive unit. In India, a lot of cooks actually seal the edge with dough to provide the tightest possible covering.

After you take it out of the oven, mix the rice up and down gently to combine the chicken mixture from the bottom with the rice on top.

The Hyderabadi biryani is done! Serve with raita (also known as dahi ki chutney), which is a sauce made from yogurt. 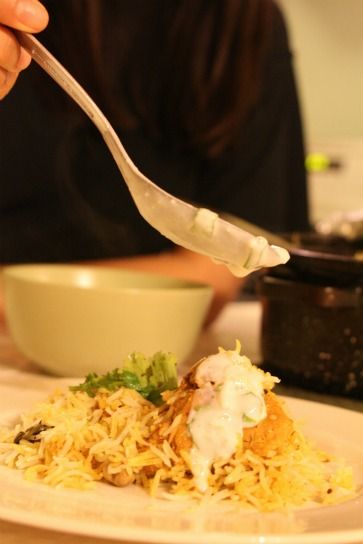 Want to make your own biryani? Here are two FOOD52 favorites:

Le Creuset has generously offered to reward our Big Feasters for all their hard work, and as our third Big Feast, Liyna and Anum will win, in the color of their choice (flame, cherry, fennel, Caribbean, dune, Dijon, or Marseille): a 5-quart braiser, a 4-quart stainless saucepan, and a large serving platter. Pitch us your Big Feast at [email protected] for a chance to win up to $500 in Le Creuset booty.

k9 November 8, 2014
If u cant give out the secrets , I dont understand whats the use of even lostin ur half done recipe here ?? Its just waste of viewers money tryin to make ur so called half biryani. Dont worry I'll let out the secrets for u. The main spices which are not mentioned here are stone flower, kebabchini, khus root, pan root, maratha maggu, mace, nutmeg, star anice ,rosewarer, kewra water along with the ingredients that the blogger mentioned.
Author Comment

Anum&Liyna May 15, 2012
Thanks for all the comments :) We put the full biryani recipe up on Anum's blog! Here's the link: http://anumarshad.wordpress.com/2012/05/15/big-feast-hyderabadi-biryani-recipe/

mrslarkin May 10, 2012
Looks like so much fun, and so delicious! Can't wait for the big feast! P.S. that shrimp biryani mentioned at the end of the post is one of my all time favorite food52 recipes. Going to try the tamatar biryani very soon.
Author Comment

Anum&Liyna May 11, 2012
Thanks mrslarkin!! We love alll kinds of biryani so we definitely will add those ones to our to-do list :)

monkeymom May 10, 2012
Looks wonderful. Is it possible to get the recipe?
Author Comment

Anum&Liyna May 11, 2012
haha well my mom would probably kill me if i gave the whole recipe away but I'll message you something right now :)

boulangere May 9, 2012
Your feast is treating us all to a profound series of learning experiences. Thank you again.
Author Comment

Anum&Liyna May 11, 2012
That's so sweet of you to say! Glad you are enjoying them and hopefully you like our final post too :)