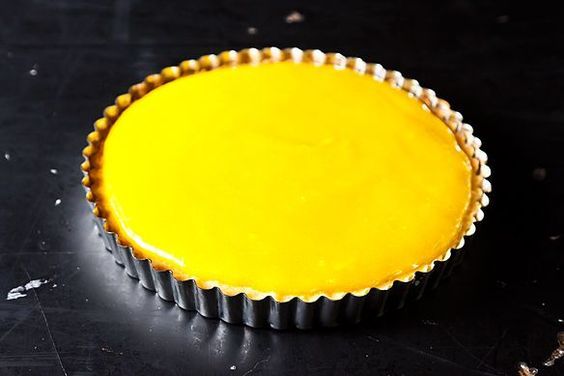 The other day I arrived home from work to a rectangular package on my porch, its outer wrapping somewhat ripped, postmarked Los Angeles. I opened it to find a wooden box, which likely once housed a bottle of wine but now carried four Meyer lemons. There was a scribbled note inside -- “We miss you in Brentwood, love Jamie.”

I smiled to myself, imagining my friend Jamie sitting in her backyard at dusk, inhaling the smell of lavender and sage as she watched the sky turn lavender behind her lemon tree, feeling slightly guilty for her citrus bounty, thinking “Who can I unload some of these lemons on? Oh yeah! Jennifer! Poor dear living in that land of $5 asparagus! She always loved my lemons.”

She then no doubt piled herself into her Prius – which happens to be covered in polka dots – and hastily deposited my lemons at the post office before running off to her kid’s school to yell at the headmaster about the fact that California elementary schools never seem to teach the American Revolution and why is that?

I allowed myself an hour to feel sad, imagining my old self driving a black Pontiac aimlessly along Santa Monica Blvd pondering what to eat for lunch instead of my current self who chases Senator Jim DeMint down a flight of stairs.

And then I got busy with this Lemon Tart with Olive Oil. Which, as it turns out, is a slightly modified version of this recipe from epicurious. I only discovered this after I made the tart, so I'll tell you what it was like following the modified version.

I will tell you that nancy d. has a creative way of looking at the world – one minute she is talking about a cup of this and a teaspoon of that, and then the next thing you know she’s dealing in ounces. No matter, you have a kitchen scale right?

Also, how much is the juice of three lemons in her mind? Let’s call it half a cup. And let me tell you, this interesting crust, really more cookie than pastry, is not getting pressed up the sides of anything. Prod it bit by bit until it spreads across your tart pan and say a small prayer.

She also never tells you quite how long to cook that curd -- which you should do in a heavy bottomed pot -- and so I became impatient when it did not thicken and tossed in a bit more corn starch. Big mistake. I never fully got out the smallest lumps, even when in stirred in my butter and the delicious olive oil that my friend Helene recently brought me from Italy.

A few hours later, chilled tart in hand, I trotted off to Bethesda for dinner at M & A’s house, during which I explained that I probably was going to have to relocate soon because there are no left turn lanes in DC and I’d recently seen a grown man carrying his MetroCard around his neck. They patiently pressed their case for DC, explaining we would have a good bakery in Farragut Square any day now.

As M told us a story involving the Irish ambassador set in the wilds of rural Alaska, we dug into the tart -- which is basically a giant lemon bar, and quite tasty – and drank a bit more wine. My friends pretended not to see the lumps. Because that’s what great friends do, no matter where you happen to find them.

nogaga May 28, 2012
Thank you for highlighting this recipe. I thought it was easy and fab! I just made it, following the epicurious instructions and using up some late backyard lemons with a beautiful aroma and an unknown pedigree. The color is amazing!

BettinaS May 20, 2012
I came across this blog looking for something to do with the bounty of Meyer lemons I came across this week, but I'm staying (or subscribing) because of your wonderful story telling. I once was a Los Angeleno living in D.C., bemoaning the lack of quality citrus and expensive artichokes, avocados, and asparagus just the same, but really barely realized what I was missing until I moved back to California.

As far as bread and bakers, I'll ditto your recommendation for Atwater's (they are also at the Dupont Farmers' Market on Sundays), and Uptown Bakery, particularly their sliced wheat bread. I dream of finding a wheat bread so good in my new SF Bay Area stomping grounds.
Author Comment

bostongal May 20, 2012
thanks for another great must make recipe to add to my ever growing stack. I am going to weigh 300# very shortly LOL.

I remember my first trip to CA and AZ where I discovered that the avocados that I pay a whopping $3 a piece for here were 10 for $10. I also was in heaven with all the citrus - went on a little citrus binge while staying out there (eating, baking with, buying, making different iced teas...) but then I returned home where these jewels are not quite so abundant (or cheap). Sigh.

As for the Metro in DC - nice clean trains is a plus but every city has it's public trans issues. Having been all over the country I think we have one of the best here in Boston but still it has issues - raising rates all the time with less service, shutting down at 1 a.m., old trains, old tracks and the list goes on.

Hope you get a good Bakery your way soon!

calendargirl May 17, 2012
It will be interesting to see how Paul does with U.S. ingredients, or do they bring French butter with them? Has anyone tried their outpost in Georgetown on Wisconsin? Meanwhile, I recommend a surprising place in Bethesda, Praline Bakery & Cafe on Sangamore Road, in an unlikely mall.
Author Comment

mariaraynal May 15, 2012
Jennifer, you always make me smile. Love this post, the lumpy tart, all of it!
Author Comment

DAVILCHICK May 15, 2012
I laffed out loud over the man with the metro card around his neck and I felt your anguish over having to now live in a city with no left turn lanes. Seems barbaric, doesn't it? I'll give this recipe a try although it's sounding a little high maintenance-y for me but it does look like the perfect summer tart.
Author Comment

Jestei May 15, 2012
no i just make it sound like it all takes a long time; it's not really HM i don't really do HM (except for nail care)

mcs3000 May 15, 2012
I will swap as many Meyers as you want for those fried jelly donuts from Kosher Pastry Oven. Deal?
Author Comment

Jestei May 15, 2012
I can't believe I have learned about this place from you. It looks great .

camilla May 15, 2012
This is something a must try lemon dessert, a tart that has a twist using lemon. Well you can find in everythinglemon a wide selection of lemon recipes you'll surely love!
Author Comment

ATG117 May 14, 2012
Your column is one of my favorites, and the color of that tart is spectacular. But I gotta say, I'd wear a metro card around my neck if they'd make the NYC subways as clean as the DC metro. Oh, how I long for days waiting 14 minutes on the platform when I'm crammed onto a smelly 4,5 every morning.
Author Comment

Jestei May 15, 2012
Isn't that color downright sexy?? I can send you an entire screed on the short comings of the metro, beginning with constantly broken escalators (which matters since they are a million miles underground here) and ending with the fact that it does not service vast swaths of the city. But the grass is definitely always greener in someone else's (smelly) commute. Happy eating :)

Rhonda35 May 14, 2012
It's been 17 years since I lived in the DC area, but Firehook used to make really good bread. I know it's still around and has several locations...is it not so good anymore??

Jenny, I would eat that lumpy tart just so I could hang out with you and listen to all your funny stories. Happy Mother's Day, one day late.
Author Comment

PistachioDoughnut May 14, 2012
The tart looks simply divine. I am biased for bright yellow color. I am totally in for the olive oil in the use of tart shell.How could I not? I have added pistachio oil in my mango cheesecake.
Author Comment

PistachioDoughnut May 17, 2012
J which brand or company of Pistachio Oil do you suggest? Right now I am using La Tourangelle.
I would like to learn which is the best or better.

Midge May 14, 2012
This sounds delicious, lumps and all. You made me laugh aloud re the man with his Metro Card around his neck. Only in D.C.
Author Comment

gt9 May 14, 2012
J - You make Monday's worth getting up for with your kitchen chronicles! Still smiling. :-)
Author Comment

Shalini May 14, 2012
I have to say, I love this post. I am wondering about the bakery, should I ever make it to DC.
Author Comment

jenniebgood May 14, 2012
This looks amazing. I actually still have some Meyers left over from March (!)- I've been checking them weekly hoping they will keep and hoping something will inspire me.... Maybe it's fate.....
Author Comment

BlueKaleRoad May 14, 2012
Ahh, to have citrus growing in my backyard...I miss my LA days. How very kind of your friend to share! I think this lemon tart is the perfect post-Mother's Day treat to indulge in - love the almonds and olive oil in the crust.
Author Comment

lazychef May 14, 2012
Yes WHYYY are there no good bakeries in DC? I'm a bread fiend; this tortures me on a weekly basis.

MrsWheelbarrow May 14, 2012
None. Not a single good bakery. But I will extol the virtues of Atwater's, at the Bethesda Central Farm Market. Their seeded rye is almost as good as the one I haul back from NYC every single visit.
Author Comment

Cortni R. May 15, 2012
You know we are in a baked goods wasteland (save Baked and Wired) when the only bread offering at the farmer's market is Great Harvest.