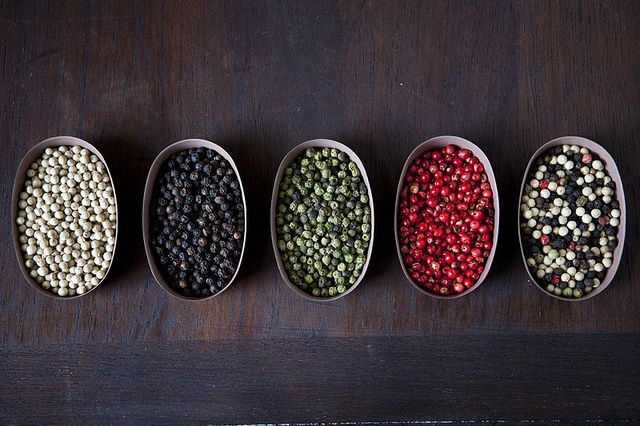 We admit it -- we've been known to use pepper indiscriminately, grabbing whatever peppermill is near. We know it's wrong -- don't judge us too harshly -- and we decided that it was time get our act together and bone up on pepper. We called on our friend Lior Lev Sercarz of La Boîte à Epice (remember him? Eric Ripert's go-to spice guy), to set us straight. He forgave our seasoning sins (you should, too) and gave us the following re-education.

All true pepper comes from the piper nigrum plant. There are other spicy berries masquerading as pepper, but don't be fooled.

It's best to stick to whole peppercorns and grinding your pepper fresh. The pre-ground stuff loses its aroma quickly, making it dull by the time you get to cook with it. Who wants that?

Want to know what Lior says about grinding and storing spices? See here. 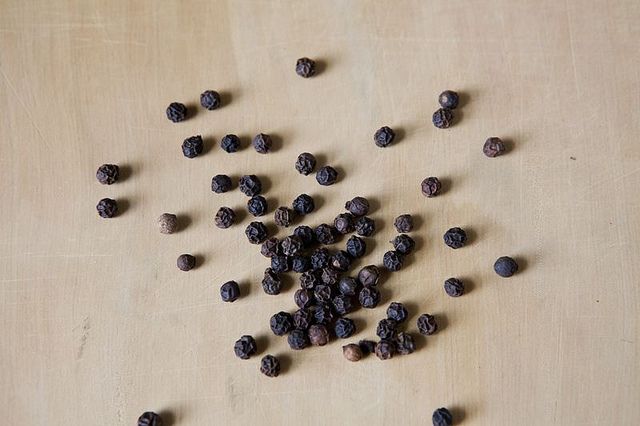 What it is: Produced from the still-green, unripe fruit of the piper nigrum plant, the berries are dried for several days, or blanched and then dried.

Good for: Just about anything. We love it freshly ground over salads or eggs, and use it in a majority of our savory cooking. We're also hoping to revive Steak au Poivre, Merrill published a great recipe for it in the New York Times not too long ago. 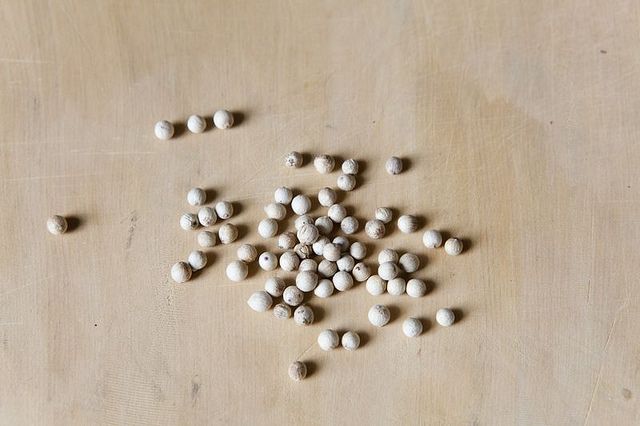 What it is: The slightly ripe fruit of the piper nigrum plant is gathered and soaked in water in order to remove the flesh from the seed. The remaining seed is then dried. As a result, white pepper is less spicy.

Reputation rehab: There was a time when much of what was available wasn't exactly high quality white pepper. Lazy harvesting practices -- like cutting the drying time short -- can lead to fermentation and a funky taste. Luckily for us, and for white pepper's stature in the spice world, all this is changing and the quality of white pepper on store shelves is much improved.

Varieties: You might come across Muntok pepper from Indonesia and Sarawak pepper from Malaysia. Penja, a delicate white pepper that grows in volcanic soil in Cameroon, isn't likely to be found at your local A&P; if you come across it on your travels, please pick some up for us -- thanks!

Good for: Think of this as your more serene pepper, the ideal dinner guest who won't shout at the table, the one who always minds his manners. Pair it with vegetables, like these Haricots Verts à la Dijonnaise. Call on it when you're cooking fish and shellfish -- this Preserved Lemon and Spring Vegetable Risotto with Grilled Pernod Shrimp is a favorite of ours. 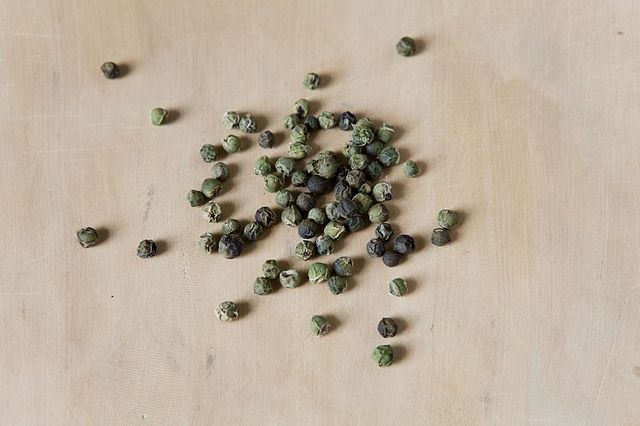 What it is: The unripe fruit from the piper nigrum plant, green pepper is most commonly pickled, freeze-dried, or air-dried.

Good for: Its fresh, herbal notes make it great for pork and pickling. Try it with Cider-Braised Pork Shoulder or Spicy Celery Quick Pickle Sticks. 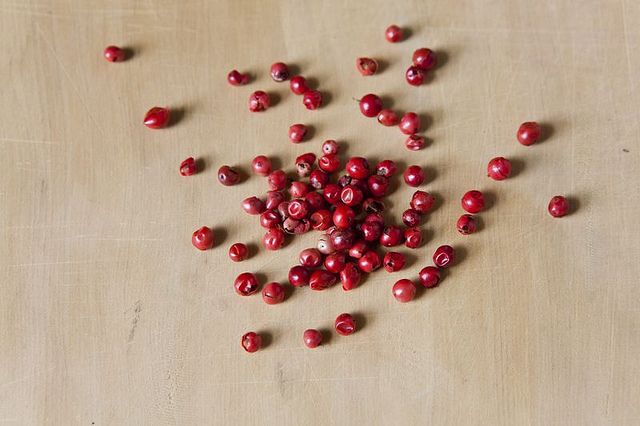 What it is: The fraud of the pepper world! It may look like pepper, and it may be called pepper, but this berry comes from another plant altogether. It's often grouped under the pepper umbrella because of its shape and spiciness. It's also commonly referred to as red pepper, though they are unrelated.

Where it comes from: Pink pepper is the round fruit of the schinus terebinthifolius tree, native to South America. Most pink pepper comes from Brazil.

Good for: We like this little misfit, and you will, too. Its delicate bite, mild heat and berrylike sweetness make it ideal for seafood and desserts. Try these Pink Pepper Macerated Strawberries.

What it is: The ripe fruit of the piper nigrum vine, picked and left to dry in the sun. Often confused with pink pepper, red pepper is very hard to find. Chances are, the average consumer will never encounter red peppercorns but, again, keep us in mind if you happen upon it.

Where it's from: Red pepper hails from the region of Pondicherry in India.

Good for: The citrus notes of red pepper pair perfectly with seafood, such as these Salmon Papillotes with Red Peppercorns, Lime and Fresh Ginger. 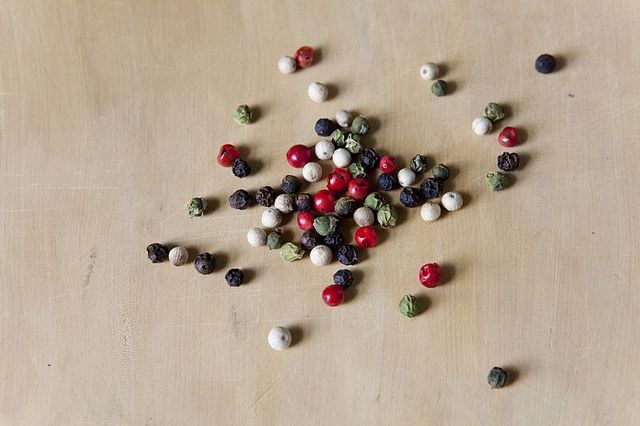 What they are: Blends make for a complexity of flavors. At La Boîte à Epice, Lior makes a colorful blend of eight different peppercorns called Pierre Poivre, named after the French merchant who broke the Dutch monopoly on the spice trade.

DIY: Why not make your own blends? Buy peppercorn varieties individually, and then mix to your heart's content. Think of the possibilities!

Good for: Blends such as Pierre Poivre are great for steaks, game, burgers, grilling, and salad seasoning. 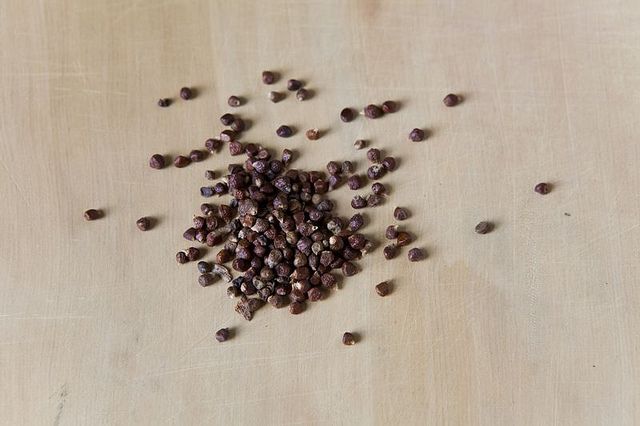 What it is: Another pepper imposter. Grains of paradise were once used as a substitute for black pepper when it wasn't readily available. We're big fans of this spice, and think that in some cases, it's got pepper beat. Someone around these parts wrote a love letter to these exotic little seeds a few years ago.

Where it's from: Grains of paradise are the seeds of the the melegueta plant, a shrub that grows wild in countries like Guinea, Liberia, and Ghana. The plant is often linked to the cardamom family and, like cardamom, it produces pods filled with fragrant seeds.

Good for: Less acidic and milder than black pepper, grains of paradise have notes of citrus, ginger, cardamom and hazelnut with a nutty crunch. They're popular for brewing beer and also great sprinkled over salads or as seasoning for fish and meat. Or try them with these Hard Cooked Eggs, Lime Aioli and Dukkah.

What's your favorite type of pepper? How do you make the most of it?

Kayla A. May 19, 2015
What is l'espilette pepper? I see it in many recipes, yet have never seen it in a store. What can I use as a substitute?

Ashley B. March 16, 2013
My favorite pepper is Kampot pepper specially in red. It is very tasty and fragrant. http://kampot-pepper.us
Do you have other arontic pepper to advise me?

Kitchen B. June 6, 2012
A Kitchen Confidence feature on cardamom pods would be great - I say this because I've been meaning to blog about the different types of cardamom I've come across including one impostor - white cardamom! I hurriedly snatched up a bottle in Paris a few years ago, excited that I had happened upon a rare being.......only to discover...an impersonation, skimmed milk masquerading as cream - bleached green cardamom pods masquerading as new, fresh, white!

Panfusine June 6, 2012
White cardamoms go thru a bleaching process, an extra step .. Cardamoms by themselves have quite a bit of processing before they get to the form that we buy.. I'll get the details from my other half (his family once owned a cardamom plantation) & share..

Kitchen B. June 6, 2012
Grains of Paradise are plentiful in Nigeria - they are chewed as a common cure for a sore throat! But also in a spicy peanut butter and other dishes. I also have cousins of piper nigrum - long peppers. Would one call these impostors or the real thing?

I have a tin of penja pepper and sugar that I got as a gift from a friend. Haven't really used it much - I'm thinking now it would be great in meringues, sort of a blank template for the pepper flavours to shine through. Thanks for giving us the 'low-down'.

Panfusine June 6, 2012
Long peppers were a precursor to peppercorn & have been used since Roman times..They're a different variety and its not the fruit thats used but rather the inflorescence or Catkin. They have a zing similar to schezuan pepper (AARGH, another pepper!). I have a recipe on F52 for Lehiyam truffles that uses long pepper.

Panfusine June 5, 2012
My favorite and a staple in my kitchen is a jar of green peppercorn on the stalk pickled in brine these bottles usually have a couple of bits of preserved lemon as well.. It works wonders for pesto & dips!