The Cherpumple-Off: FOOD52 vs Serious Eats

For the next two weeks, we're hosting our own Summer Food Fights on FOOD52 -- come play along! Big prizes await. 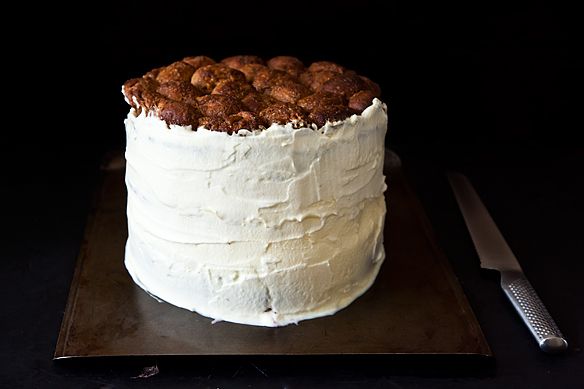 Have you ever heard of a cherpumple? The idea is nutty: first, you bake a cherry pie, a pumpkin pie, and an apple pie. (Hence the name.) Then...you bake each pie into a cake -- traditionally a chocolate cake, a spice cake, and a yellow cake, respectively.

What? I'll show you: First, you drizzle cake batter into your prepared pan. Then, firmly grasping your fully-baked pie, you flip it into the cake pan and cover it with the remaining batter. Contrary to expectations, it bakes up perfectly, without ruining the pie, into a perfectly smooth cake...with a secret inside. 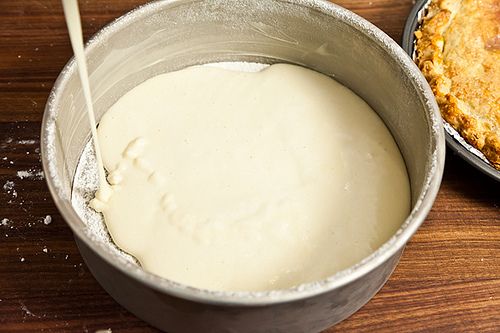 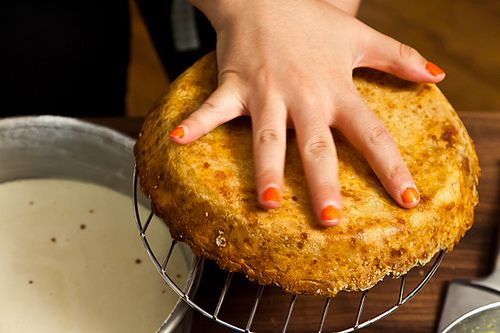 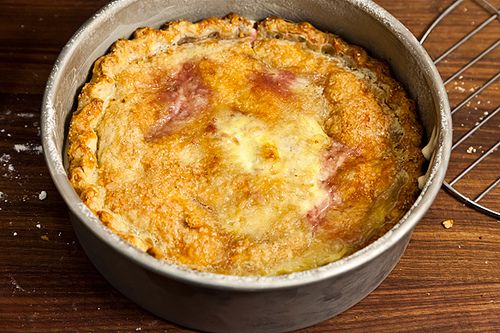 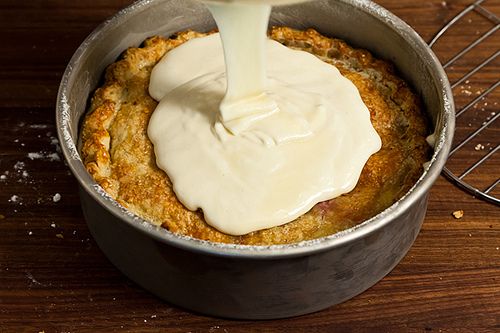 Do this three times, stack the results, and you get a monstrosity of baked goodness that we can only describe as...Olympian. Which is why we challenged our friends at Serious Eats, who we decided were most likely to take on a ridiculous baking project, to a Cherpumple-Off!

The Challenge
To bake the craziest, most imaginative, most delicious cherpumple-inspired confection. To make things interesting, we took on a sweet cherpumple and Serious Eats signed up for a savory one.

The Results: FOOD52
I baked our three pies at home, then transported them to the test kitchen for layer baking and stacking -- I knew I couldn't do it all in a day. The pies? I kept it in-house with contest-winning Cherry Clafouti, Amanda's Raspberry Swamp Pie, and the Banana Cream Pie from the New York Times Cookbook (I swapped in a meringue topping from the book for the cream).

My strategy was to wow the audience with wildly different pies that each had difficult elements: fragile meringue, creamy, oozing raspberry pie, and delicate clafouti custard.

And the difficulty continued with the chosen cakes: the banana meringue was paired with Monkey(Ginger)Bread, because I knew I wanted to incorporate a yeasted sweet bread. The clafouti went inside a Milles Crepes layered with whipped cream (I used the batter in this recipe for Crepes with Lemon Curd & Blueberry Compote) in keeping with the French theme. And to keep a layer classic, the raspberry pie was embedded into Tender Yellow Cake, which you can see above in the cake layer how-to. 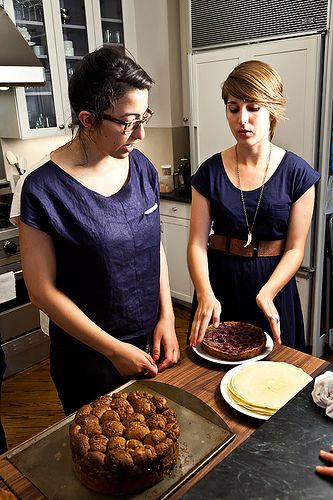 Kenzi and I taking a deep breath before cake assembly

As you can see, assembling the layers was no cake walk -- the crepes slipped and slided, and the banana cream was partially oozing through the monkeybread. (Have you ever tried turning a meringue-topped pie upside down?) 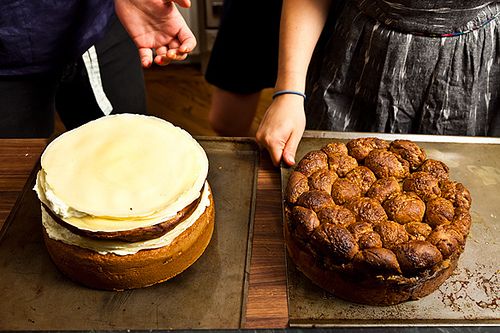 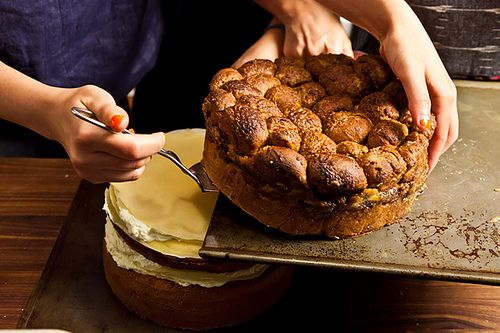 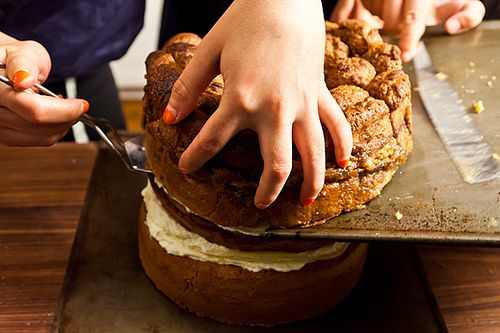 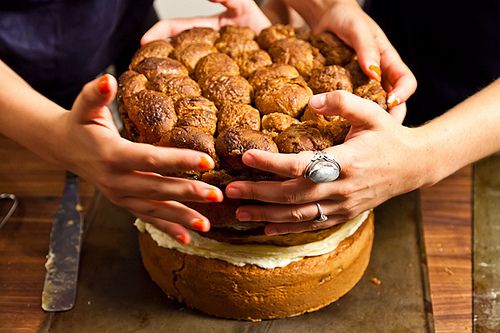 But once we iced the contraption -- which, by the way, weighed at least fifteen pounds -- with Nancy Silverton's Genius Whipped Cream, it looked positively svelte: 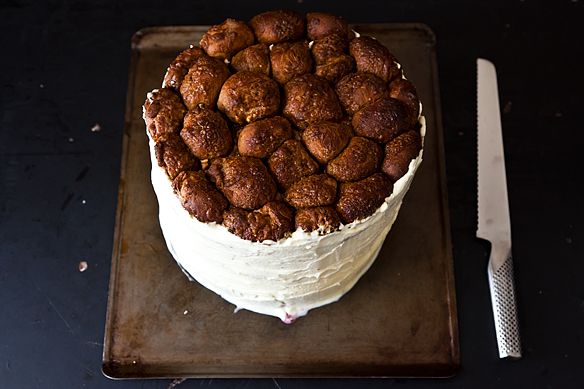 We'll show you the inside when we get to scoring. For now, on to Serious Eats.

The Results: Serious Eats
In a move that still has us reeling, the SE team, led by Chief Creative Officer J. Kenji Lopez-Alt, made a Thanksgiving-themed savory cherpumple for their entry. The mind boggles. 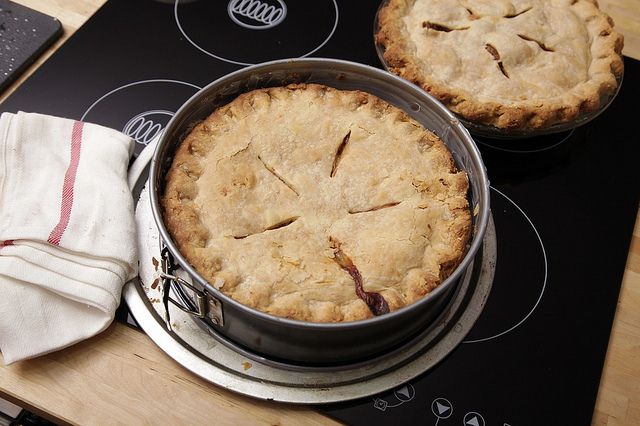 They kept it simple: sweet potato pie, green bean casserole pie, and chicken pot pie, all in double crusts of pie dough. (For those of you keeping track at home: that's a pound and a half of butter just in the pies.) 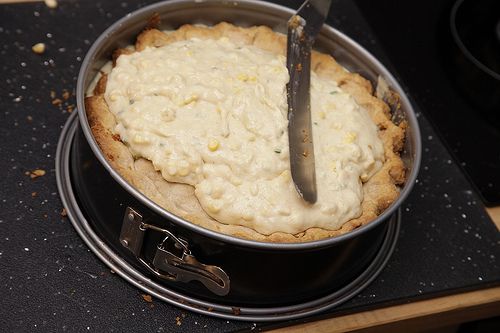 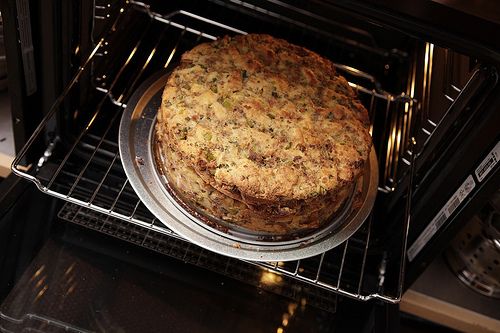 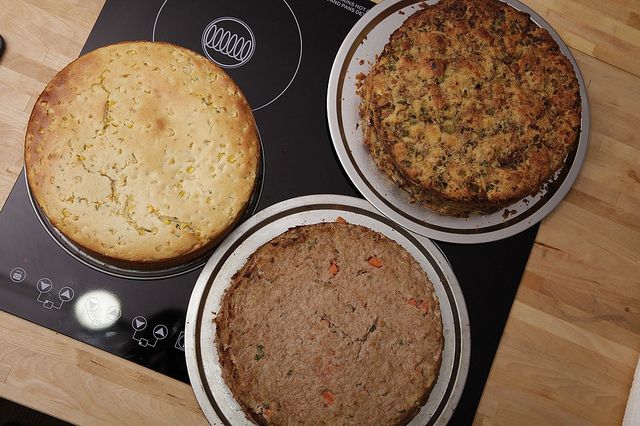 The pairings? Sweet potatoes matched up with jalapeno cornbread, green bean casserole went inside a sage-sausage stuffing, and the chicken pot pie became a Turducken layer, embedded in a duck-turkey meatloaf. (Slow clap for that one, Serious Eats.)

Kenji encountered some of the same crumbling issues we did when it came to assembly, but again, icing solves all problems. Or, in their case, mashed potatoes, cranberry sauce, and fried garlic. 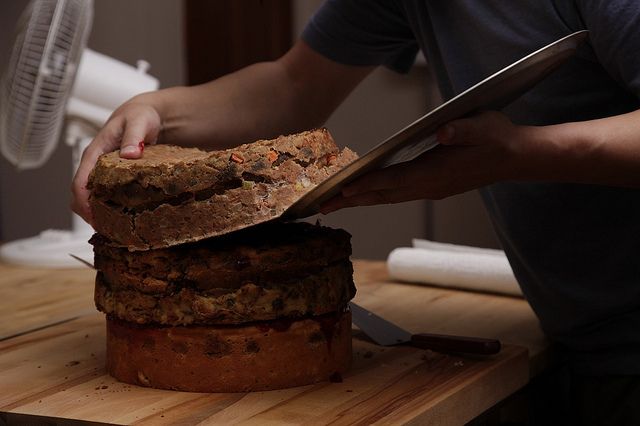 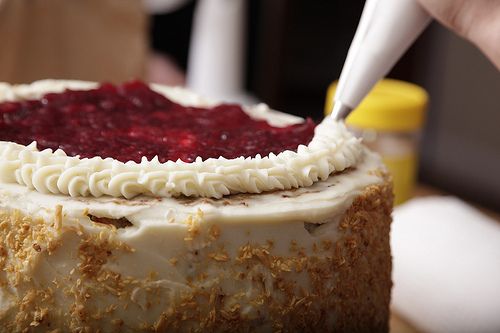 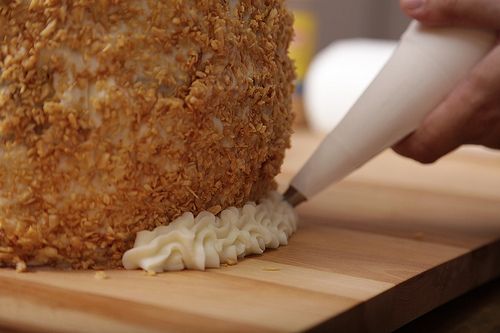 The final result was impressive to behold. (I will confess that I gasped audibly.) But what about the inside? 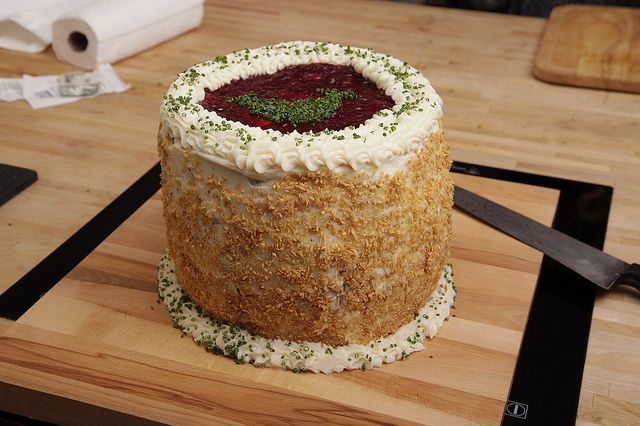 The Breakdown
In the end, the competition got closer than anyone could have expected. We invented the following rubric for cherpumple success -- the winner is the one with the most points out of 50:

5 for name
F52: 5
"Clananafouti Swamp Monkey": In the spirit of "cherpumple" itself, it both tells you what you're dealing with in the cake, and is just really fun to say.
SE: 3
"Sir Plumple": SE took the meta-route -- Thanksgiving, with its pardoned White House turkeys, is a holiday that can't help but be anthropomorphized -- but points off for no portmanteau. 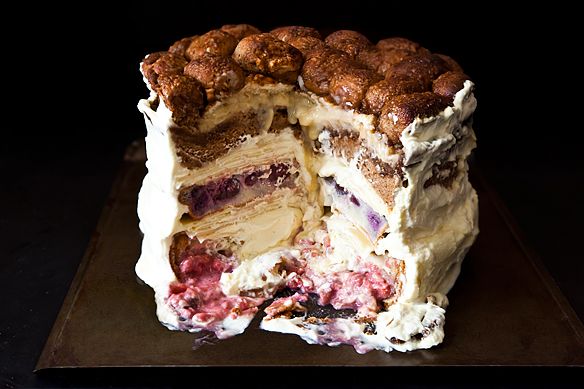 F52: 1
The cake buckled about 30 seconds after the first slice was pulled out, with the Raspberry Swamp Pie leaking and the Milles Crepes oozing whipped cream. Soon after, the cake did an impressive imitation of the Leaning Tower of Pisa, slowly slumping sideways until the top layer reached the baking sheet. 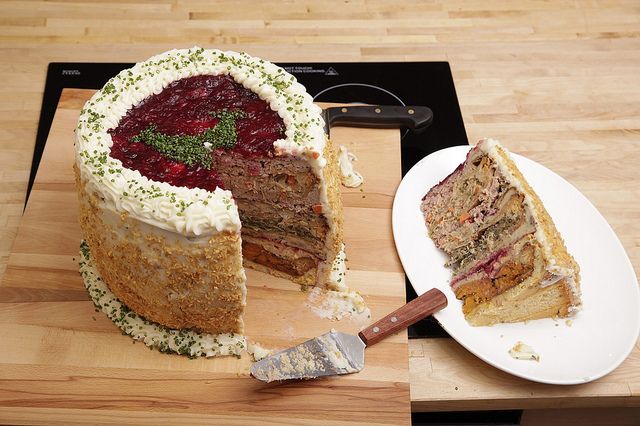 SE: 4
The cake held up to numerous slices, both thick and thin, while staying whole and upright! But when it had reached the halfway point, small bits of the cornbread and stuffing layers began to detach from their inner crusts like shingles on an old house.

F52: 4
With a rustic (but maybe too rustic) whipped cream outside and a monkeybread top that begged to be picked at, the cherpumple looked like a hatbox (kind of). Or an oatmeal cream pie with a foot of cream filling (kind of). 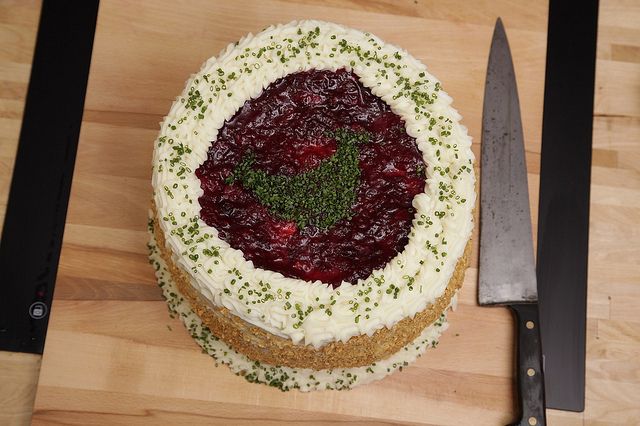 SE: 4
With piped-on mashed potatoes flourishing the top and bottom of the cake, fried garlic paving its outsides, and a slick of cranberry sauce garnished with chives in the shape of the Serious Eats logo on top, the cake looked adorably like an elaborate throw pillow. But one point off for structural problems -- under the weight of its Turducken top layer, the top-heavy cake started to bulge in the middle from the heaviness as soon as it was assembled.

10 for originality
F52: 9
The cake ran the gamut of both pie styles -- with a double crust, a meringue top, and a clafouti -- and cake styles -- with a regular yellow cake, a yeasted sweet bread, and a crepes cake. (You'd think they were trying to make it hard on themselves or something.) The pairs of cakes and pies themselves were complementary without being expected, but hey, is clafouti really a pie?
SE: 7
Points for executing a Turducken layer (a meme within a meme!), but while the idea of a Thanksgiving-themed Cherpumple itself was original, once that was decided the rest was pretty expected. 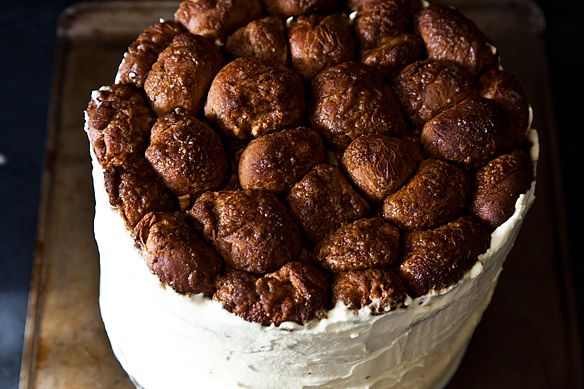 F52: 20
The cherpumple had an all-star pedigree: the Raspberry Swamp Pie, Ginger Monkeybread, Cherry Clafouti, and Tender Yellow Cake were all FOOD52 contest winners in the past, and they worked as well as a dream team as they did on their own. However, though the Banana Meringue Pie was impressive (how do you flip that into a cake pan?), it was a bit overambitious -- baked inside the yeasted bread, the meringue became gooey and tough on top and the graham crust got soggy. And the Mille Crepes was a whipped cream bomb, with little flavor aside from the clafouti inside. Post-collapse, the cake almost worked better than it did upright -- hand-picking bites from among the wreckage, with a little bit of cream here and a little bit of gingerbread there, was a delight. 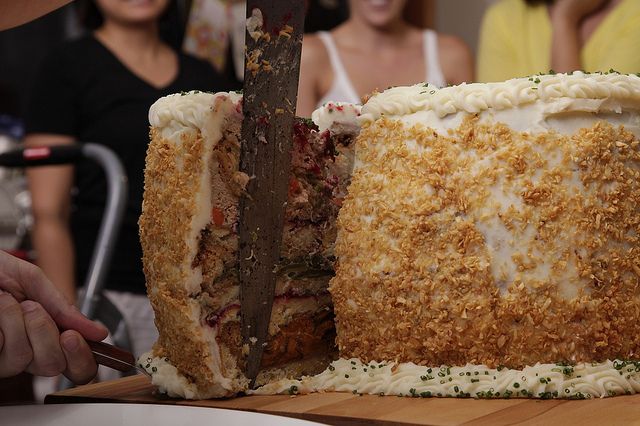 SE: 23
Here's the thing about Thanksgiving: everything goes well with everything. Taken as a whole, the flavors were harmonious and familiar. Of course you'd want a bite of stuffing at the same time as a bite of green beans. But taken separately, the cornbread was a bit one-note, with the jalapeno dominating, and the sweet potatoes were underseasoned, neither sweet not savory. And some of ours tasters complained about the fried garlic being overwhelming (though to be fair, others loved it). 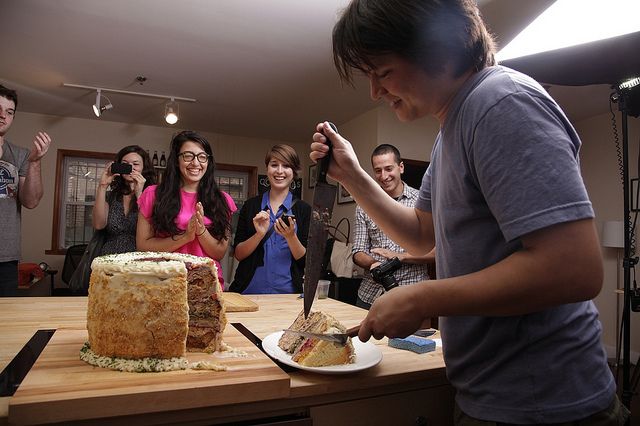 Congratulations to our friends at Serious Eats! The points were close, but we knew we were goners when we saw (and tasted til our bellies ached) their Sir Plumple. As you can see from my and Kenzi's expressions as Kenji cuts into the cake, we weren't even mad -- just impressed and in awe. It takes a special kind of crazy to make a twenty-pound cake that takes a full two days to finish. It turns out that both Kenji and I have what it takes to do so, but Serious Eats won this round.

Til the next time, and the next intricate baked good, we're signing out!

Deedledum November 16, 2015
Have you guys ever considered a rematch with Serious Eats?

Michelle G. January 5, 2014
Innovative idea, but I like my tastes a little more separated?

ChefJune August 13, 2012
Splendid creations, both! Amazing to look at, but not sure I'd want to try eating a slice of either. Although it would be fun to pick at both. Looks like you all had a ton of fun with this.

FWIW, Clafoutis is not a pie, it's a pudding.

Cucinista August 12, 2012
Looks like an entry in the film Le Grande Bouffe (1973?) with Marcello Mastroianni --a classic about eating oneself to death. Definitely a team effort but fun to watch. Awesome!

Kristen M. August 8, 2012
Not only was this contest awe-inspiring to watch unfold, but both cherpumple derivatives were actually delicious. No, really. Like keep-picking-till-they're-gone, just-one-more-2-pound-slice delicious.

Cookie16 August 7, 2012
Oh my goodness...haha. I'm sure these were tasty, but the slices kind of look like a hot mess! Not the most appetizing thing I've seen all day, but probably was the best tasting of them all!

arielleclementine August 7, 2012
this is the greatest thing ever! hats off to the competitors- so impressive! and thanks for including the monkey gingerbread! eee!

Panfusine August 7, 2012
wow... I'm speechless.. Splendid cakes both! COngrats to both of you!

Panfusine August 7, 2012
wow... I'm speechless.. Splendid cakes both! COngrats to both of you!

Dina M. August 7, 2012
last year, for my friend's birthday, I made a rainbow layer cake with vanilla frosting, so that it looked like an ordinary cake on the outside, but when you sliced it, voila! instant party excitement. I thought there was no way to top that...until now! awesome entries all around! fun times!

jenniebgood August 7, 2012
Cake wars - YES! Congrats to both teams - I think there were winners all around.

Kenzi W. August 7, 2012
All weeks should be as pie-filled (and cake-bound) as those were. Best. Challenge. Ever.

aargersi August 7, 2012
You guys are complete nutbars. In a good way! This is hilarious and, well, hilarious - I mean, who DOES this???

Nozlee S. August 7, 2012
I still can't think about the hours of work I put into the cherpumple without GIGGLING with delight. So fun! So ridiculous!

Shalini August 7, 2012
Congratulations to both teams on brilliant ambition and excellent execution! Hand-picked bites were a delight....good for you for eating it!

fiveandspice August 7, 2012
Oh no you didn't. You guys are cah-razy. I say that as a compliment with awe in my voice.

MrsWheelbarrow August 7, 2012
I bow to you. This is at times appalling, at times hilarious, but, primarily, inspiring. You could get a medal for Sticktoitiveness. (flipping a meringue pie? what insanity?)