Tomatoes are the beauty queens of summer: beautiful, a bit high-maintenance, and occasionally prone to bursting. And they're not afraid to break your heart: tomatoes just aren't worth eating in any season but the summer. As red as a hothouse tomato looks, it can't compare to the juicy, intense flavor of a sun-ripened sungold at farmers' market.

As you probably know, tomatoes are actually fruit. But did you know that to keep tariff laws in order, in 1893 the Supreme Court unanimously decided to classify tomatoes as a vegetable? You can read the full decision here, if you'd like -- tomatoes may be fruit botanically, but legally they're vegetables.

If you're lucky enough to have tomato plants in your backyard, you know to water them well (but never let moisture touch the leaves!) and to keep them on the vine as long as possible to get the best of their sweet flavor once picked. For those of us who have to buy at market: most tomatoes are sold just a day short of peak ripeness, just for ease of transportation. Look for tomatoes that are unblemished, feel heavy in the hand, smell amazing, have clear, unwrinkled skin. If you need tomatoes for that day or are looking to make a big batch of salsa or tomato sauce, ask around until you find a stall with a "seconds" bin -- tomatoes that got smushed in transit, are partially split open, or are just a little ugly. Not only are these ready to eat, they're also less expensive! 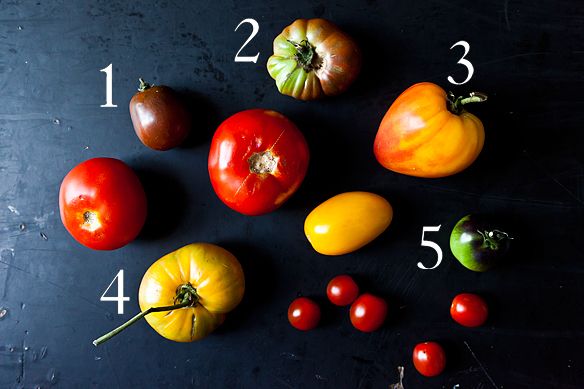 The Heirlooms
Heirloom tomatoes are the ugly ducklings of the family, with gnarled outsides and flavorful innards. With dozens of cultivars, most heirloom varieties originated when a genetic mutation held over a generation or two. Because they aren't bred for consistency, heirlooms have wonderful craggy shapes and come in all colors: yellow, orange, green, and even black. We gathered as many varieties as we could at the Union Square Greenmarket to photograph, but these are just a drop in the bucket:

1. Black Krim - This variety originated in Crimea, where the long, hot summers are perfect for growing tomatoes.

2. Black Heirloom - Originally from Russia, the reds and greens in this tomato make it almost mahogany in color.

3. Mr. Stripey - Intensely sweet and striped in red and yellow, the tomato we picked out was adorably heart-shaped!

4. Green Zebra - Conventional green tomatoes are just unripe, but in heirloom varieties it's just another mature color. This yellow-green tomato is less sweet than other varieties because of its striped green flesh.

5. It's a Mystery! - We couldn't figure out the variety of this tomato: pale green on its lower half and darkest black on top, it had sky blue mottling near the stem. Amazing. If you know what variety this could be possibly be, let us know! 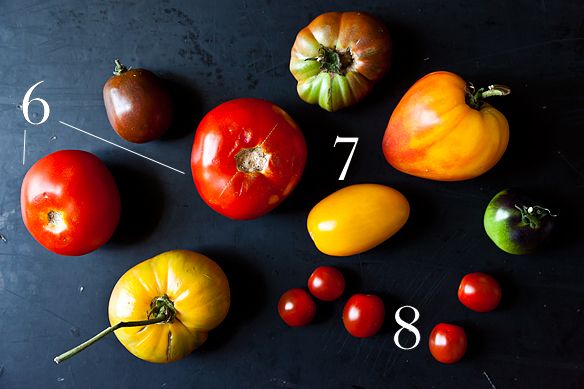 The Regulars
These are the tomatoes you're used to: round, reliable, and uniform in color. Most of these tomatoes are hybrids bred for their consistent shape -- an heirloom tomato makes a gorgeous addition to a salad, but it's the plum tomato you go to when you need to make a sauce. There's room for all kinds.

6. Beefsteak - This is what you think of when you think of a tomato: round, meaty, and red to the core. (These are Merrill's favorite kind of tomatoes!) They're sweeter than heirloom varieties, are usually smaller, and have a much higher yield, meaning that you get more bang for your buck when planting them in the garden.

8. Cherry - From Sungolds to "Yellow Pears," I would bet that most cherry tomatoes never make it out of their respective owners' gardens -- they're that irresistable eaten sun-warmed straight off the vine. If you manage to get them inside, though, cherry tomatoes are perfect for salads: bite-sized and ready to eat, they won't get watery on contact with dressing. (Need to cut them in half? Try this trick.) 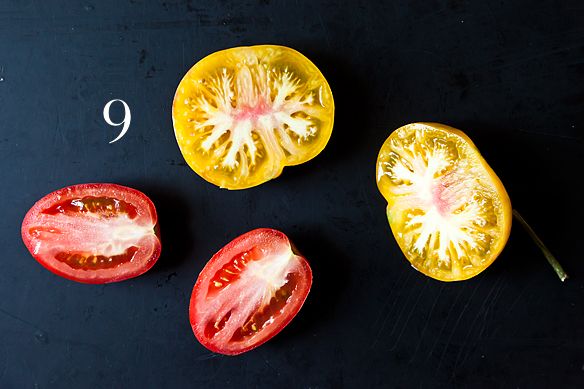 9. The Inside Scoop - As pointed out above, the inside of a tomato is important once you start cooking. Big, pound-plus tomatoes are mostly composed of seeds and the membranes around them -- less than ideal for breaking down on the stovetop. Small, meaty plum tomatoes, on the other hand, leave more behind after seeding.

Whether you're making sauce, tomato pie, or anything else, you might also need to peel your tomatoes. Kristen has us covered: you can freeze them, blanch them in boiling water, or just use a food mill.

From the garden or the farmers' market, it's always a good idea to eat as many tomatoes as possible during the summer -- here are three tomato-forward recipes you'll still be dreaming about in December:

Nicole January 31, 2014
For those in the Kansas City area, Kurlbaum's Heirloom Tomatoes are the BEST source for heirlooms while in season!!

David August 15, 2013
The definition of "heirloom" tomatoes is highly debated due mostly to length of time seeds have been available but scientifically all heirloom tomatoes are open or self pollinated and hybrids are cross pollinated. Hybrids have been developed by tomato sellers from farmers to grocers to better suit their needs. The two most dominant characteristics they're bred for are large production per plant and thick skins which help protect them from disease and bursting during shipping and handling. Thick skinned tomatoes are usually smoother, more uniform in size and symmetrical in shape. So while most all "ugly" i.e. wrinkly, asymmetrical tomatoes are heirloom or open pollinated there are plenty of heirloom tomatoes that are smooth skinned and symmetrical in shape. So don't feel you have to buy ugly tomatoes to get heirloom or sweet, good eating tomatoes. Hybrid tomatoes tend to have less vibrant color, and less concentration of flavor (and smell). So in looking for a good eating tomato look for vibrant color, thinner skins and good tomato smells.

When speaking of her 3 categories of "regular" tomatoes just like "roma" is a type of plum tomatoes "beefsteak" is a type of larger red, round, or perhaps better called "slicing" or "sandwich" tomato. Almost every tomato that actually has "beefsteak" as a part of it's name is an open pollinated or heirloom tomato. Because most beefsteak tomatoes have medium thick skins they were somewhat successful as a commercial tomato being offered in most grocery stores up until about 5 years ago. Unfortunately now they have to be sought out more and more at farmers markets etc.

A note on "plum" tomatoes. It is estimated that 50%-75% of american canned tomatoes are from 5 hybrid cultivars developed in CA. In Italy it's estimated 50% of Italian plum or canned tomatoes are from the plant "Roma VF" which is an open pollinated plum tomato bred to resist the Verticillium Fungus. I've grown these tomatoes and they are significantly sweeter than ordinary grocery store plum or roma tomatoes in America. About 10% of Italian canned tomatoes are San Marzano tomatoes, a thin skinned, sweeter, thinner and longer shaped plum style tomato. It is open pollinated and also indeterminate in contrast to most plum tomatoes being determinate. To me it's usually worth paying a little more for San Marzano's just like paying a little more for a good sandwich tomato.

Lindy C. August 13, 2013
Mystery tomato is an unripe Indigo Rose variety. I have them in my garden now. When ripe, the green becomes more rose colored. I find their flavor less delicious than the other 150 heirloom varieties I grow. I won't regrow them next year (despite their popularity with children as "purple" tomatoes) simply due to the lack of good flavor. I am an urban farmer from Seattle.

Shalini August 20, 2012
Hi Nozlee! What intensely beautiful tomatoes you have chosen, including the mystery one!
Nice breakdown in types and great, concise fact-finding!

LunaTec August 18, 2012
Tomato #5 is the Indigo Rose developed at Oregon State University. (http://www.opb.org/news/article/osu-researchers-roll-out-new-tomato/) It supposedly has the highest anti-oxidant level of any other tomato in the world. ?? Don't know about that though. I was told it just came out this year and that it's DNA is intact and undamaged because they never messed with it in the first place. ?? Don't know about that either but it sure is yummy! :D It starts out looking like a little purple and green cherry tomato. I was told it's still unripe as long as the bottom is green. It's supposed to be purple on top and red on the bottom and it's size is more like a small tomato than a cherry tomato. I have 3 plants in my yard here in Portland and they're pretty prolific. And we've had a very mild summer too. Can't wait to see what they do when the sun comes out.

erin August 13, 2013
I concur. I have an Indigo Rose as well and it's underside will be red when ripe. The indigo/black color comes about when exposed to sun. Great and very productive, and as it is open pollinated, you can save the seeds too!

nutcakes August 17, 2012
Regarding tomato #5, my uncle has a plant that looks like that with the dark green top. He got it from a Cal State Univ, and it was tagged 'Millionaire's Tomato'. This might be a lead.