Ruth Bourdain (and a Giveaway!)

Today: We have no idea who he/she is, but the mysterious (and hilarious) Ruth Bourdain talked to us about his/her new book, Comfort Me with Offal. We're giving away 3 copies -- read to learn more! 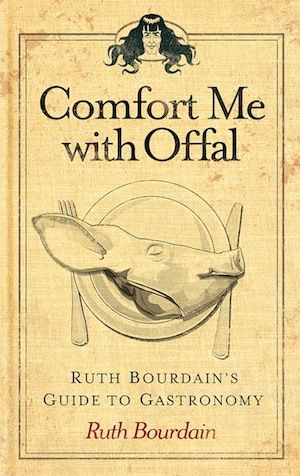 1. Describe your all-time favorite meal.
Hmm. Mine or Ruth's? Ruth would definitely go whole beast. Ideally, an elephant, which she would not eat nose-to-tail but trunk-to-tail-to-ears, saving the elephant ears for last as dessert dusted with cinnamon and sugar. Speaking for myself (it does get confusing at times), I'm pretty happy with a giant bowl of really good ramen with copious amounts of chashu pork.

2. Ruth Reichl and Anthony Bourdain -- why mash them up?
Ruth Reichl's tweets, with their distinctively poetic tone and haiku-like structure, were just asking to be spoofed. They stand in such stark contrast to the rest of what you see on Twitter. Anthony Bourdain took notice and started to read them aloud as mock beat poetry on his short-run Sirius radio show a couple years ago. I took the next logical step and performed a mind meld, mashing up these two starkly different food personalities, re-envisioning her dreamy tweets in his acerbic, scatological, drug-addled persona.

3. How has your persona evolved over time? What made you make the jump to a book?
Pretty quickly after the character took off on Twitter, I got some interest from a number of publishers. I knew that the parodies of Ruth Reichl's tweets could not a book make. However, as time went on, the character began to evolve into a general food world satire, poking fun at all sorts of things from Michael Pollan's food rules to holiday cooking tips. Once that evolution took place, the idea of doing a book became much more realistic as there was more to work with. I toyed with a few ideas, from a cookbook spoof to a memoir, and eventually hit upon doing a satirical handbook. This gave me an opportunity to poke fun at the whole food scene. The Preppy Handbook was a big inspiration. I also put some "foodoir" in the book -- personal essays about Ruth's past that open each chapter.

4. "Foodies" -- you either love 'em or hate 'em. What's your take on the food-obsessed masses?
I'm a foodie. Oh no, did I really just say that? I mean, I'm a "culinary enthusiast." There, that's better. Everybody hates the word "foodie." Food obsession is a little over the top these days, but that's what makes it so ripe for parody. This book is an effort to catalogue the crazy state of modern food -- particularly the chapter that presents a typology of all the different food "types" or "tribes" that inhabit the gastronomic universe -- and play with some of the moral conundrums all foodies must face, like what to do when you bring a locavore to Chinatown.

5. What's next for Ruth Bourdain? Any book tour appearances?
What's next? I'm open to anything: a Food Network show, Dancing with the Stars, bar mitzvahs, cage match with Guy Fieri, you name it! I would like to do appearances, but we haven't figured out a way to do so that would preserve anonymity. On the other hand, I will start doing some radio interviews soon using a voice modulator.

Want to win a copy of Ruth Bourdain's new cookbook, Comfort Me with Offal? Answer the question below in the comments section of this post by Tuesday, October 23th at 2pm EST:

What two food celebrities would you mash up for a Ruth Bourdain-esque character? (Martha Fieri, for example.)

We'll pick 3 random winners and contact you by email -- best of luck!

witloof October 18, 2012
M.F.K. Lee. {MFK Fisher and Sandra Lee -- because just the thought of the two of them meeting each other is so horrifying, it's hilarious}.

sitstay October 17, 2012
Rocco Stone. He only tweets photos of himself cooking shirtless.

Burlap A. October 17, 2012
Michael Ruhlman and Martha Stewart, hands down totally best combo!! His twitterific use of the word Fuck and her penchant for perfection at all time make it a winning combination!

pierino October 17, 2012
I'd like a cage match with Guy Fieri too. So please enter me in the contest.