Anna's Big Feast: The Day of the Party Arrives

All week, Anna Hezel has been researching, planning, and, ultimately, celebrating her sister's wedding with an Azerbaijani brunch feast.

Today: The big day arrives! This is Anna's fourth and final post -- check out All About Azerbaijan, Bringing the Feast to Buffalo, and Setting the Stage. 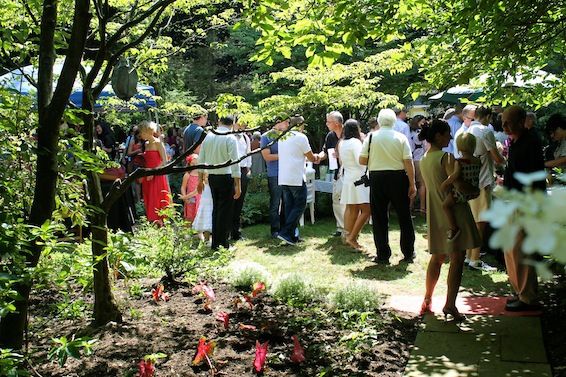 When the day of the big feast arrived, nobody was completely prepared. Down to the last minutes, we found ourselves running around in tennis shoes, moving furniture here and there, cubing watermelon, and icing our precious kegs of beer. We had all been out late the night before, celebrating the wedding, and we had all woken early to prepare for more celebrating. 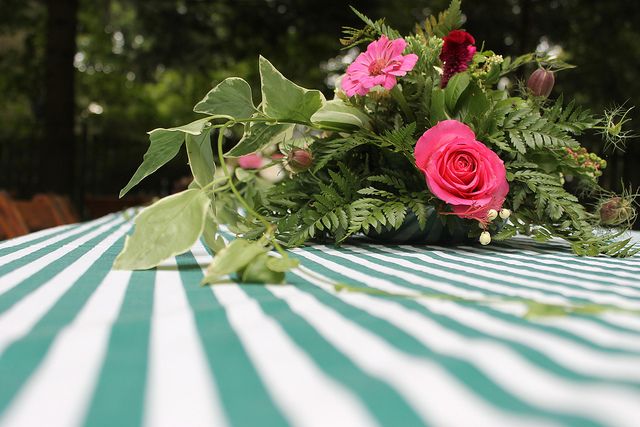 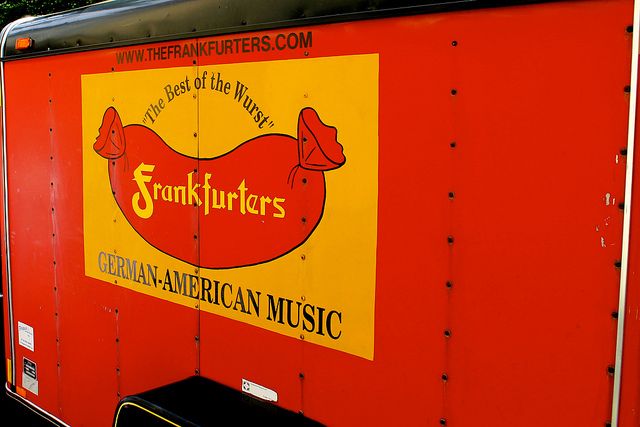 A fire was started in the grill. Lemon and lime slices were added to tall, icy pitchers of lemonade. We dashed around the yard, setting out bouquets of flowers from the wedding the night before. The Frankfurters arrived in a procession of vehicles and motorcycles and assembled in a corner of the back yard. Before we could even say the word "lederhosen," the guests began to appear. 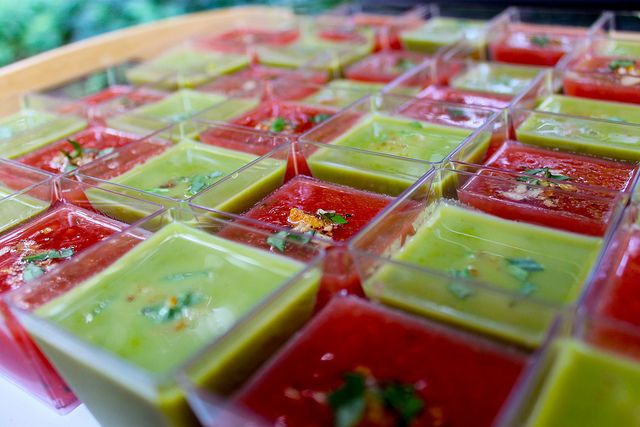 After everyone had helped themselves to glasses of wine or crisp Flying Bison beer straight from the tap, it was high time to begin eating. Paying tribute to the Azerbaijani tradition of beginning a meal with a small glass of dovgha, a chilled herb-filled yogurt-based soup, the brunch began with two cold soups -- an emerald green pea and tarragon soup, topped with toasted breadcrumbs and tarragon, and a sweet watermelon gazpacho, sprinkled with toasted almonds and basil. 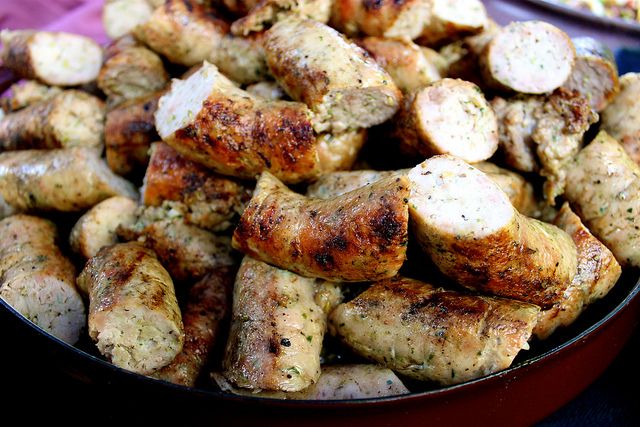 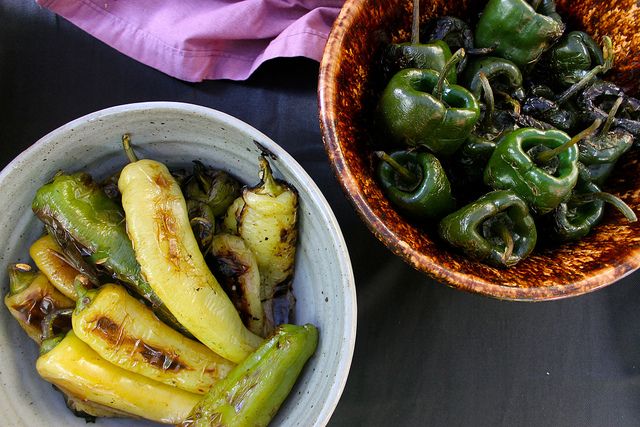 When the yard had been filled with nearly 200 people, after tiny shots of soups had been passed around on big trays, it was time for the real meal. In accordance with Azerbaijani tradition, fragrant sausages and spicy, charred whole peppers went directly from the grill into serving platters. Grilled zucchini was tossed with olive oil, salt, pepper, and fresh basil. Recalling the common Azerbaijani contrast of smoky eggplant and bright mint, we layered grilled eggplant with feta cheese, pomegranate seeds, scallions, mint, and toasted pine nuts. 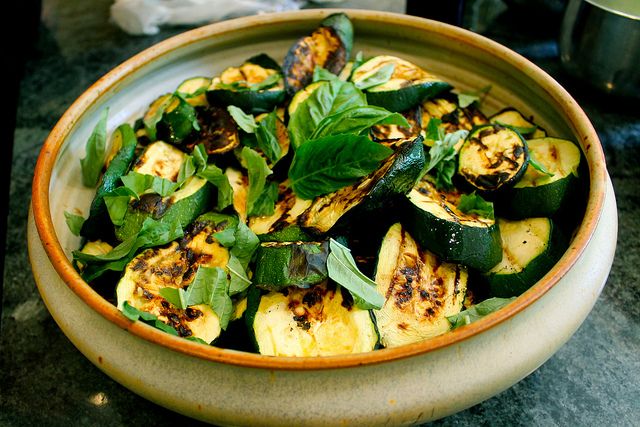 To accompany our grilled fare, my sister made an outrageous amount (60 cups, once it was cooked) of couscous, tossed with dried apricots, yellow raisins, toasted pistachios straight from Azerbaijan, cilantro, and plenty of lime zest. My mother shredded carrots and tossed them with orange juice, cumin, and mint. 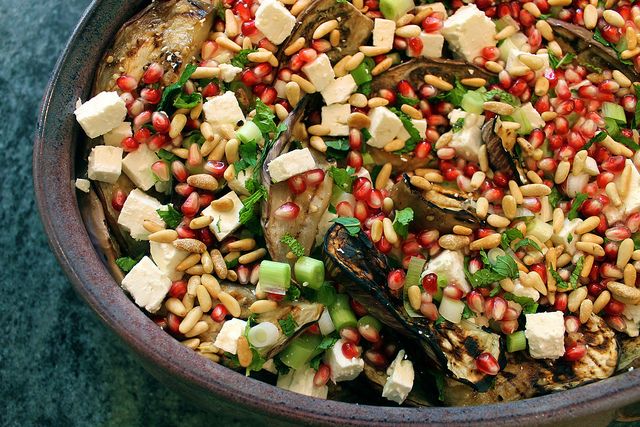 As if this weren't enough, we added to the table a giant bowl of green beans, platter after platter of juicy red tomatoes, and no fewer than six batches of Edna Lewis' corn pudding. Yes, the corn pudding was 100% American. But in my mother's opinion, it's a crime not to serve sweet corn at an end-of-summer party in New York State. 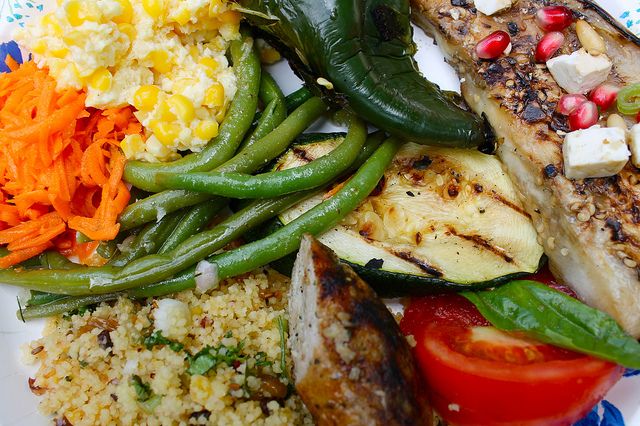 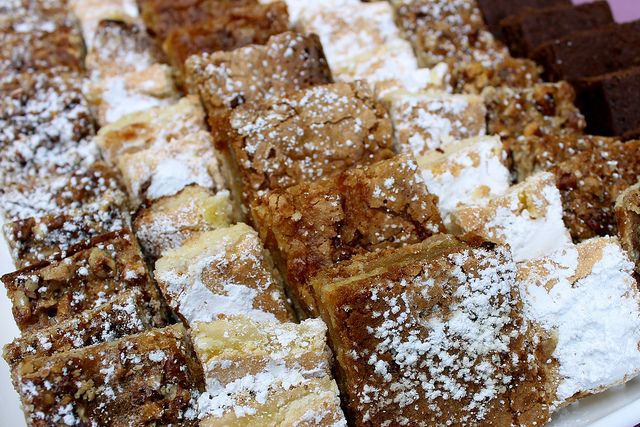 For dessert, my mother made four types of cookie bars: pecan, apricot, lemon, and chocolate. After many debates about cakes and doughnuts, baklavas and pastries, we settled on bars, knowing that we needed something that could be made in advance, that would hold up well to heat and humidity, and that wouldn't require any fussy cutting and serving during the party itself. The bars looked beautiful, arranged in stripes on their platters, and they offered enough variety to please the whole crowd. 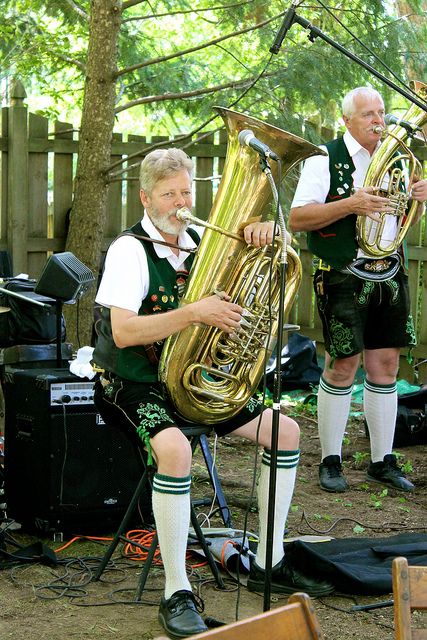 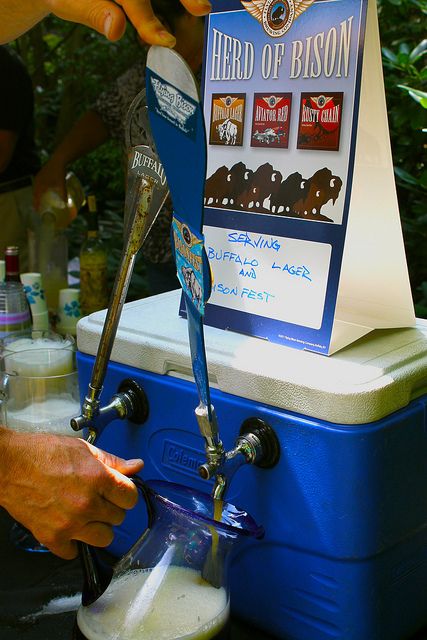 The Flying Bison Buffalo Lager and Bisonfest beers we had on tap were huge hits. Such big hits, in fact, that we managed to run out of them only an hour or two into the party, necessitating an emergency mid-party beer run. Even so, the party continued on cheerfully into the evening to the tune of trumpets, accordians, tubas, and Alpine horns. 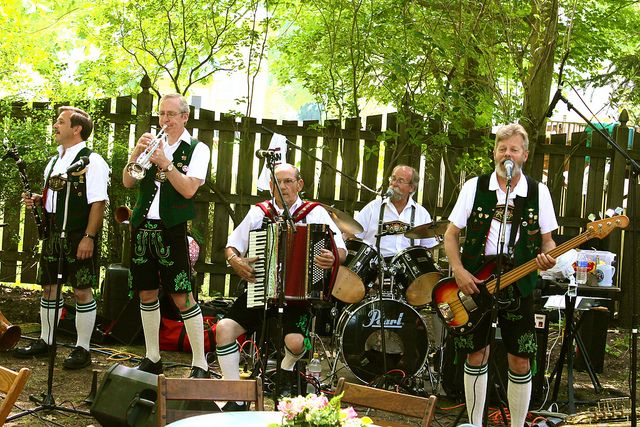 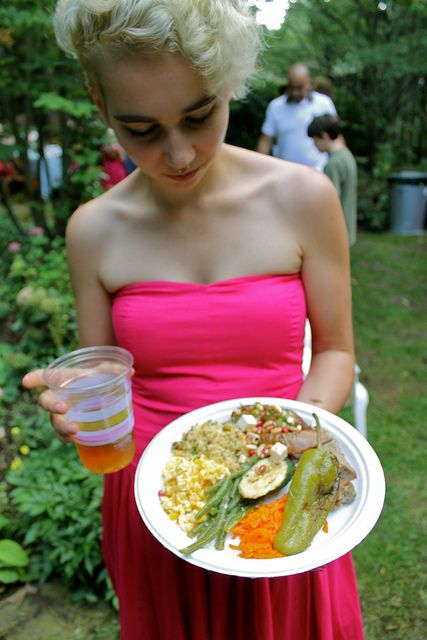 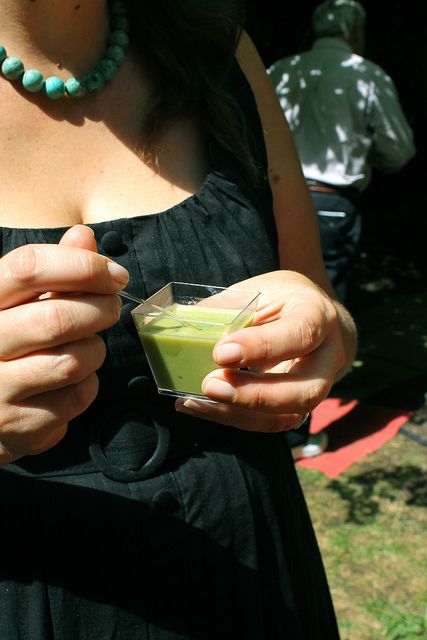 Americans and Azerbaijanis alike -- adults and children -- ate their fill, danced, laughed, and sat in the garden a long while, soaking in the rare company of so many friends and relatives convening in one place. Even as the final guests petered out, my immediate family stayed outside until dark, alternating between sips of coffee to revive ourselves after the long day and champagne, to celebrate a big success. 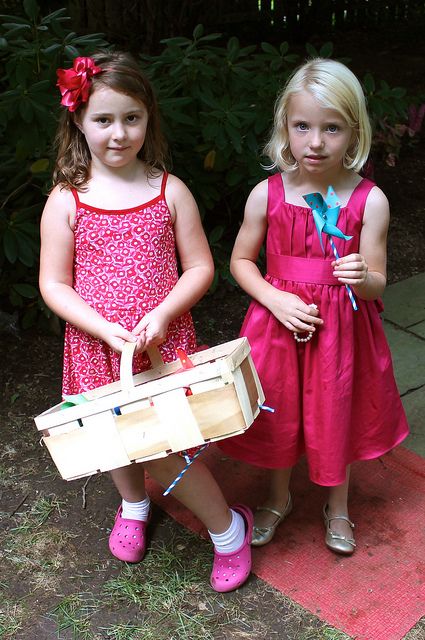 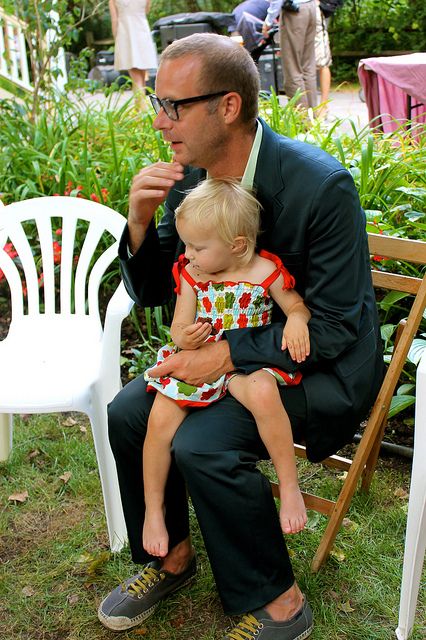 We breathed a collective sigh of relief. We had done it. Rachel and Javid were at last officially married on two different continents, and we had successfully hosted 200 people at our home, turning no one away hungry. We may have sacrificed some sleep and pulled some muscles here and there, but for this party, it was worth it. And besides, we had some great leftovers to look forward to. 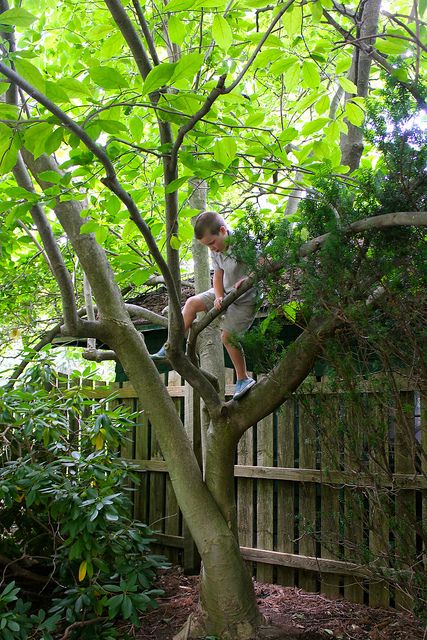 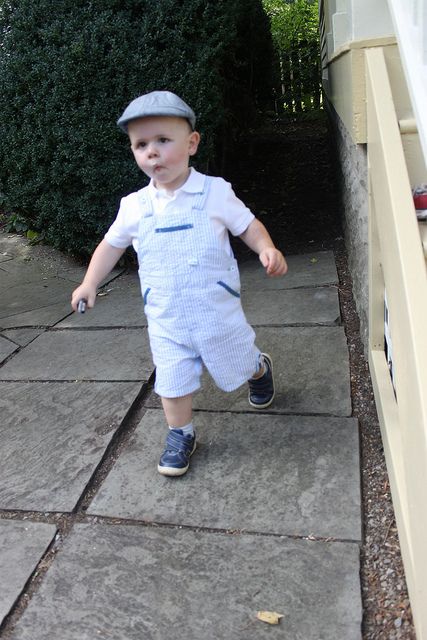 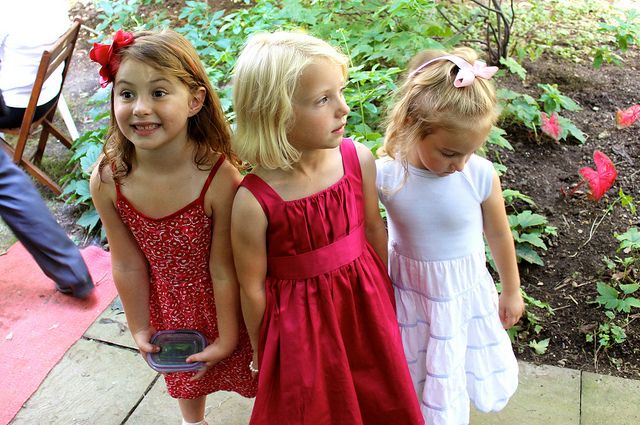 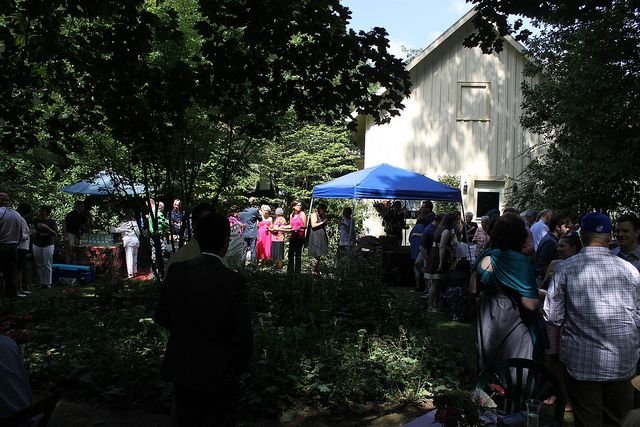 Blissful B. October 25, 2012
I love the Big Feast series, always so impressive, and yours is no exception: from the huge amount of work and love that went into it, to the gorgeous photography and prose. Thanks for sharing your lovely achievement with us.

TXExpatInBKK October 21, 2012
Gorgeous colors and the food looked delicious... thanks so much for sharing with us!

fiveandspice October 21, 2012
Congratulations on a wonderful feast Anna. What a crowd, and what a great spread! I bet everyone had a fantastic time.

rizzle October 19, 2012
What a gorgeous party! I love that the little girls' dresses match the soup!

cookingProf October 19, 2012
What a fantastic post and such a warm way to welcome Javid into your family.
Your mention of dovgha brought back warm memories of my Azerbaijani grandmother and her dovgha. I should probably post her recipe here some time.
Author Comment

Anna H. October 20, 2012
You should! That would be fantastic! Thank you so much for following along and reading about my Big Feast.

cookingProf October 19, 2012
What a fantastic post and such a warm way to welcome Javid into your family.
Your mention of dovgha brought back warm memories of my Azerbaijani grandmother and her dovgha. I should probably post her recipe here some time.

EmilyC October 19, 2012
Anna, I thoroughly enjoyed reading about your Big Feast this week. It's no small feat to pull off any meal for a crowd, especially 200 people! Beautiful spread of food -- so seasonal and fitting for the occasion. You're clearly an awesome sister! : )

Bevi October 19, 2012
Anna, your feast is beautiful. Simple yet gorgeous food, in keeping with your culinary culture, and I love the German band!