Inspired by conversations on the FOOD52 Hotline, we're sharing tips and tricks that make navigating all of our kitchens easier and more fun. Today, we're taking a closer look at vanilla. 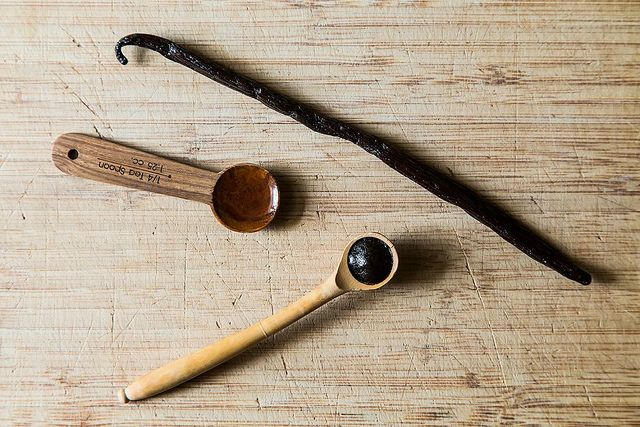 Vanilla is a workhorse in the kitchen. Every home cook who likes to turn out baked goods has vanilla in various forms in their pantry. It's so ubiquitous that we probably don't give this ingredient much thought, but that's not fair considering all it does for us. Think about it, a drop of extract, or a scrape of a bean, can take you pretty far. And don't those little flecks of vanilla make a dish look more exciting? Yes.

So today, we're giving vanilla some well-deserved time in the spotlight. 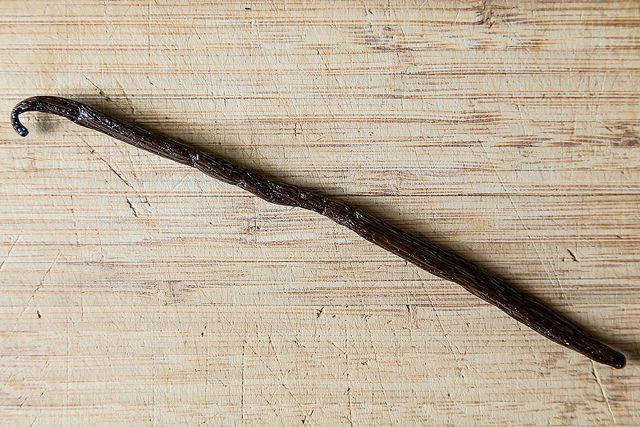 First things first: why are they so expensive? Producing vanilla is labor-intensive and time-sensitive. The trickiest part is pollinating, which is typically done by hand -- these climbing orchids need to be pollinated the day their flowers bloom and to make matters more difficult, the flower only lasts one day, so if you miss the flower, you're out of luck (and vanilla). After pollination, it takes about 9 months for a mature vanilla bean to form. The beans are picked green and cured for several more months before they end up on store shelves. 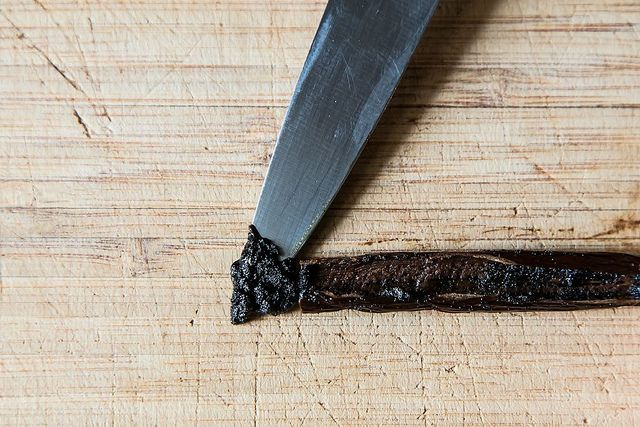 The flavors in vanilla beans vary, depending on where the plants were grown. There are four main varieties we'll find on store shelves; here's a brief primer:

Bourbon vanilla from Madagascar (and surrounding islands) is known to have the most pronounced vanilla flavor, thanks to high amounts of vanillin (the natural compound responsible for that familiar flavor). Bourbon vanilla is also grown in New Zealand by our friends at Heilala.

Indonesian vanilla sometimes has a smoky quality, and tends to be lighter in color.

Mexican vanilla beans have half the amount of vanillin of Bourbon beans, and according to Harold McGee they "have distinctive fruity  and winy aromas."

Tahitian vanilla is a distant relative of the other varieties -- the plant is actually a different species -- and is popular for its soft floral notes.

How to store vanilla beans: Luckily, vanilla beans aren't very fussy once they've made their way into our kitchens. Just store in a cool, dark place in an airtight container. We've heard that refrigerating vanilla beans is a good idea, but an expert opinion says otherwise. In her very thorough cultural history of vanilla, Patricia Rain says that refigeration can cause the beans to harden and crystallize, and nobody wants that. 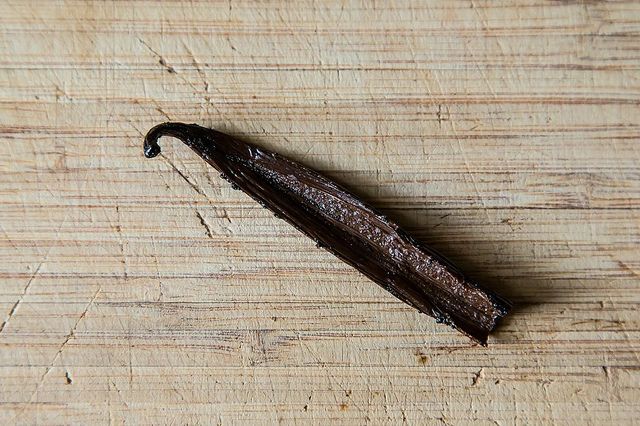 Do not discard: Vanilla pods have more flavor than the seeds we scrape out of them, so don't throw them away. A great place for scraped vanilla pods to end up is in a container of sugar, but that's not your only option -- you can use them to infuse their flavor into custard bases, simple syrups, and any kind of liquid you like. As long as they're still fragrant, they'll impart their flavor, so rinse and dry them after each use and see how much you can get out of them. Once their scent is faint, let them rest in sugar.

Do you have any favorite ways to stretch the life of your scraped pods? 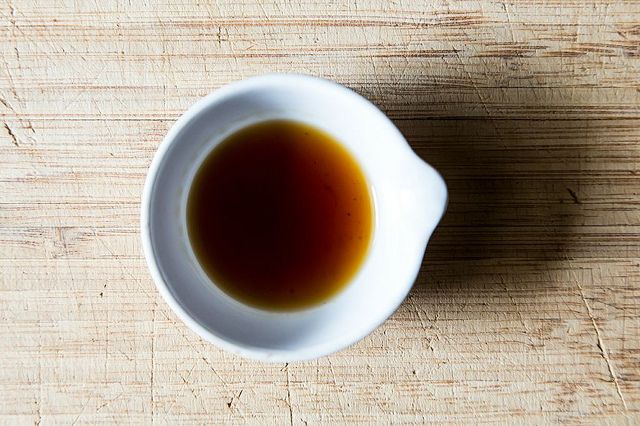 Extract: Know what it takes to make vanilla extract? Alcohol, vanilla beans, and time. The alcohol extracts the flavor compounds from the vanilla bean, then the extract ages to develop more complex flavors. The method is flexible -- the extraction time can last days or months, and the aging time can also vary. We love a flexible method, but not too flexible -- some vanilla extracts include sugar, corn syrup, and coloring. Keep an eye out for extra ingredients that might not be so necessary.

Flavoring: Natural vanilla flavoring is an alcohol-free, glycerin-based product. It is more commonly used in commercial settings, but if you look hard enough you'll be able to find some to use at home. Cooks Illustrated notes that the consistency is "viscous and a little slick" and that its flavor is sweet. The vanilla flavor it imparts is more mild than what you would get from using traditional vanilla extract, so it might not be worth the effort of tracking it down. If you're looking for an alcohol-free vanila flavoring, try vanilla powder. 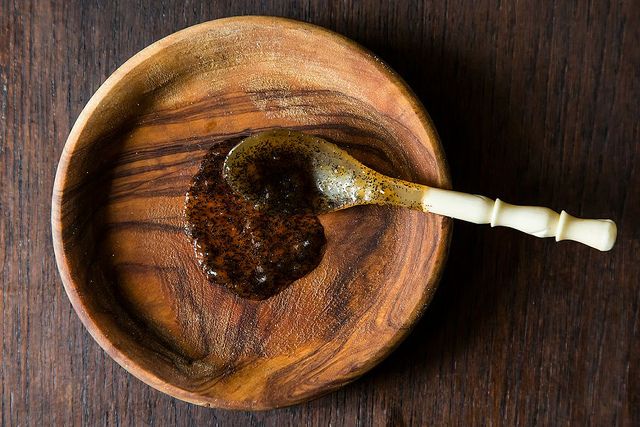 Heilala vanilla paste, a new favorite in our test kitchen.

Paste: Vanilla paste is a mixture of vanilla extract and vanilla seeds with some sugar added. It's a very convenient product if you use a lot of vanilla, or don't like scraping vanilla beans. One thing to be aware of is how much sugar is added to the product -- some vanilla pastes are 40% sugar and more like jam, which might mean you'll want to adjust some components of a recipe (or you could just spread a little on slices of buttered toast). Heilala vanilla paste is only 5% sugar and is a safe bet for baking -- a teaspoon is equivalent to one vanilla bean. We've used it in the test kitchen with great results.

Powder: Vanilla powder is dried extract with a cornstarch base. It can be used just like vanilla extract, in equal amounts, and won't discolor frostings or other color-sensitive recipes. Just mix it in with your dry ingredients.

Synthetic Vanillin: You may encounter products that contain synthetic vanillin, which isn't vanilla at all -- this stuff comes from industrial by-products like wood pulp. Synthetic vanilla flavoring is certainly less expensive, but the flavor is flat compared to the real deal. Some might say "you get what you pay for."

What's your favorite way to use vanilla? Enter the recipe into our contest!

And if you need to restock your supply, check out our shop offer for Heilala vanilla extract and paste.

Nina L. December 15, 2013
My vanilla beans were not properly stored and have dried up. Anyway to revive them?

mimiwv November 29, 2012
If the pod contains more flavor than the seeds, why don't they use it ground up in the paste or some other way, commercially?

AntoniaJames November 29, 2012
I grind the pods up all the time, whenever I can get away with it. They're especially potent in flavoring homemade almond milk. ;o)

dottieinthekitchen November 16, 2012
Yikes - I always store my vanilla beans in the freezer! Do you think I should take them out and just put them in the pantry?
I love the ideas on how to use the scrapped out pods - espc. in coffee beans!

Jeanneb November 1, 2012
I now live in Mexico and have the advantage of the real deal at a reasonable price. I love vanilla and usually double the amount called for in baked goods.

Kristy M. November 2, 2012
Mexico is the only place in the world where vanilla orchids can be pollinated naturally. It's very rare, but how cool is that? I love vanilla too, but am not lucky enough to be as close to the source as you are.

Kateq October 31, 2012
Also nice to stick the pods into a jar of coffee beans--imparts a faint and very pleasant scent/flavor

Kitchen B. October 31, 2012
I LOVEEEEEEEEE vanilla. The best thing is I've discovered how to make vanilla powder by accident (isnt that how great things happen?). The vanilla powder uses the whole pod, dried and ground to provide a spice that has all the good things about vanilla and more! This way, I dont feel bad that the dried pods only live life stuck in a sugar jar. Check it out http://food52.com/recipes/5662_homemade_vanilla_powder

AntoniaJames October 30, 2012
Last year I added a whole, unscraped vanilla bean to each of several jars of brandied cherries that I put up. Once we had enjoyed the cherries (over ice cream, over my mother's sour cream pound cake, and in some insanely decadent scones), we used the vanilla/cherry/brandy syrup for spritzers, to flavor glazes, etc. I scraped the bean seeds into some baked goods as well as in a big batch of whipped cream used with a dessert I served at a party. Then I put the cherry/brandy scented scraped vanilla pods -- which still had quite a bit of life left in them -- into a canister of white sugar. That stuff is heavenly. I use it mostly for sweetening whipped cream, where you can really taste the vanilla. ;o)