Today: We talk to everyone's favorite food blogger, Deb Perelman of Smitten Kitchen, about the brand-new The Smitten Kitchen Cookbook -- plus, a giveaway! 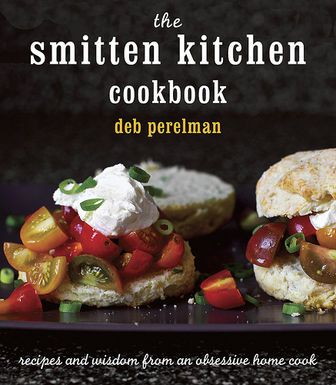 It's finally arrived, the day we've all been waiting for: The Smitten Kitchen Cookbook has hit the shelves. You'd be hard-pressed to find a home cook who doesn't revere Deb Perelman -- and/or wish to chat on the phone about recipes with her. With the 100-plus recipes in her new cookbook (mostly new, with a few old favorites from her blog), Deb's signature chatty style and simple, home-run (and Genius!) recipes comes in print form for the first time.

We talked to Deb about her tripartite cooking influences, her famously tiny kitchen, and more:

1. Describe your all-time favorite meal.
This is where I'm probably supposed to bring up that one time at Per Se or something equally luxurious, but I tend to obsess more over smaller things that I miss, like this casual place we used to go to in Chelsea back when we lived there. Anyway, we'd always drink Sancerre and someone would order escargot and I'd always order this incredible crisp artichoke salad with pistachios and manchego. And we'd always split the roast chicken and the jus, the sauce, was the kind of thing you'd drink with a straw, if everyone at the restaurant promised they would look away at the same time. They had the most perfect bread, the most perfect butter, and the fries, I swear, they were fried in horse fat or something equally un-P.C. and I don't care because they were my platonic ideal of pommes frites and we've missed them terribly since the place got new owners/menus/is no longer worth mentioning. Sigh.

2. How was the book publishing process different from blogging? (Would you do it again?)
I wanted so much for it to be the same because I've been food blogging for six years and I can do this! I've got this! But it wasn't. I think there's a certain amount of panic that sets in for first-time cookbook authors, this idea that the stakes are raised which leads to forgetting everything they know well. Or maybe that was just my experience. I think overtested some recipes; it's a guarantee that on the sixth round, you'll do something that makes the recipe fall apart and you'll pull your hair out and wonder why you were crazy enough to think you should write a book. Again, probably just me! And it took forever -- almost three years beginning to end, at least double the time it would have taken me to put the same amount of original recipes on the site. Finally, it's difficult to put the amount of things you can squeeze into a blog post (8 large photos, 4-paragraph stories, recipes with three headnotes and two footnotes) onto a bookpage. Impossible, actually.

3. What (or who!) are some of your cooking influences?
I'd say they're equally divided into thirds: seasonal/Americana, French with a little Italian, and Jewish/Eastern European. Whenever I try to stay in one area, it doesn't work and I make hamantaschen that are closer to little free-form pastry tartlets, and beef bourguignon turns into a mushroom stew with a Strogonoff-like dollop of sour cream at the end.

4. Your kitchen is tiny. Like, teeny tiny. Do you think having an enormous space would change your cooking style? If you had a magic wand, what's one change you'd make to your current setup?
It's weird because the longer I work in a small kitchen, the less it bothers me. I am not sure at this point that it would change my cooking style, or at least my approach to cooking. I think in the back of my mind I'll always have that alarm that goes off when a dish requires more than two pots or bowls or expects that your oven has room for three trays because even if your kitchen were big enough to accommodate all of that, who'd want to make a big fuss over a recipe? And although I'd like a fridge that doesn't freeze things in the back and a big open kitchen that wasn't adjacent to my son's room (he will wake up if we so much as reheat spaghetti after he goes to bed), I still think my kitchen could be a lot worse. There's a dishwasher. There are bright white cabinets (which make the place feel brighter and bigger than it is) and a cute checkerboard floor. The counter is hideous in person but looks kind of cool in photos. And there's a window, my room has a view! I can pretty much handle all of the negatives because of that.

5. What is one dish in the book that you're really proud of, and why?
Oh man, you're going to make me pick a favorite child, aren't you? Just because it's fall, I'm obsessed again (re-obsessed?) with the apple cider caramels. I made them on such a whim and I knew the process (boiling four whole cups of fresh apple cider down to 1/2 cup of syrup, before adding the butter/brown sugar/cinnamon/sea salt/cream) was crazy but even now when I try them, I still can't believe I pulled it off. They look just like any other caramel, but they taste intensely like my idea of fall bliss.

Want to win a copy of The Smitten Kitchen Cookbook? (That is, if you didn't pre-order a copy already...) Answer the question below in the comments section of this post by Tuesday, November 13th at 2pm EST:

What's your favorite SK recipe of all time?

We'll pick 5 random winners and contact you by email -- best of luck!

Rachel T. November 12, 2017
Tough choice!! I love the butternut squash and caramelized onion galette from her first cookbook. A recent favorite is the elote corn and black bean soup. SO GOOD!

cookinginvictoria November 13, 2012
I can never resist chocolate . . . chocolate souffle cupcakes with mint cream! So many of the Smitten Kitchen recipes are stellar!

meganvt01 November 12, 2012
Broccoli Parmesan fritters. I really crave them all the time - especially handy to make with leftover broccoli and a fav of my 3 year old.

irish1482 November 12, 2012
The peanut butter chocolate cake is probably the best cake I've ever made...Deb's instruction were so clear that all the steps seemed totally doable!

andreakb November 12, 2012
I love Deb's recipes soooo much! But I think my favorite is her french onion soup. It got me through last winter. Once, while making it, my soup caught on fire in my broiler and the bread bits got REALLY burnt. I just scrapped the burnt bits off . It was still delicious.

casey29 November 11, 2012
Deb's site has been in my top 5 of favorite places to find yummy recipes for years. Pick one? Hmmm, just not possible ...the latest ones I've tried are spinach and cheese strata, raspberry lemon muffins, pepita granola, and monkey bread for a brunch. So good!

CarlaCooks November 11, 2012
Deb's chicken pot pie is to die for. I am pretty sure my husband thought I was a domestic goddess after I made it the first time.

lizziebeth November 11, 2012
... dulce de leche cheesecake squares - cheesecake and chocolate and caramel, is there anything better and all together!

mels1550 November 11, 2012
White Bean Roasted Red Pepper Dip. It has a great story to go along with it as well. And it's a great snack to whip up in a hurry for my kids to dip their veggies in.

Matilda L. November 10, 2012
I loved so many of the recipes... the coconut muffins, the salads,... but Deb is my go-to when I need a killer cake recipe, whether it's an everyday cake (like the wonderful chocolate one baked in a loaf pan) or a special occasion one (my son always requests the chocolate one Deb used for her wedding cake-making adventure).

Amanda N. November 9, 2012
I love red wine and I love chocolate and I love cake! So it wouldn't be a surprise to say that I absolutely love Smitten Kitchen's Red Wine Chocolate Cake recipe :] It's always hit wherever I bring it

[email protected] November 9, 2012
There are so many of her recipes that I adore, but my absolute favorite is the breakfast apple crisp. Crunchy granola topping and silky apples...I can't resist!

AntoniaJames November 9, 2012
So many interesting and wonderful-sounding recipes. What a great idea to ask community members for their favorites!! ;o)

annbaroq8 November 9, 2012
Ooh, it's hard to pick just one, but her blueberry boy bait has never let me down. (And like she says, how can you possibly resist that name?)

Congrats to Deb on the cookbook!

spoon November 9, 2012
always the one i've made most recently -- which, since i baked this morning, is the blueberry yogurt cake.

Panfusine November 9, 2012
Haven't tried any of her recipes yet, but the apple cider caramels seems to be haunting and enticing me.. Will probably start with that recipe!