This week, she tackles finger food. 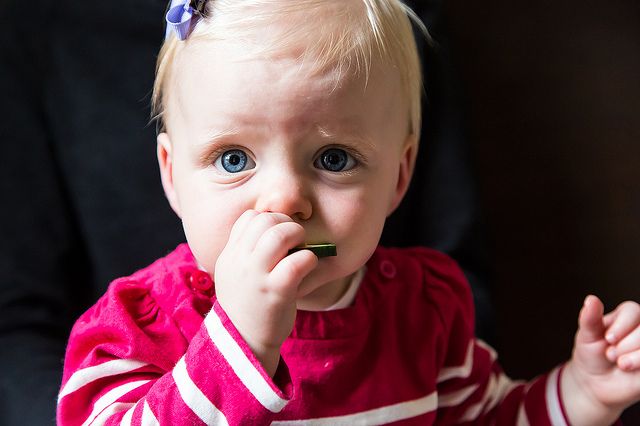 Recently, Clara has been showing signs of craving independence. She has become more and more impatient when we try to feed her and quite insistent about feeding herself, often lunging at the spoon, trying to intercept it as it makes its way to her mouth.

With things like yogurt or broccoli soup, this is a challenge -- our "neat" baby has quickly become a magnet for food stains of all sorts. But we've discovered lots of things that she'll happily gnaw at with her 6 1/2 little teeth, and that keep the mess under control. She gets to practice her chewing and gripping skills, and we can actually get the dishes done while she's occupied.

One of our earliest and most popular experiments -- to be fair, I'll credit my dad with the initial idea -- was toast. Ever since tasting a piece of my father's toast one weekend, Clara now has toast every day for breakfast (whenever we say the phrase, "Toast and BUTTER!" she literally wriggles with excitement).

As much as she loves it, after a few weeks of making her plain old toast with butter every morning, I started to get a little bored. My mother used to make cinnamon toast for my sister and me when we were little, and I still consider it one of the ultimate comfort foods, so I decided to make it for Clara. It went over well. 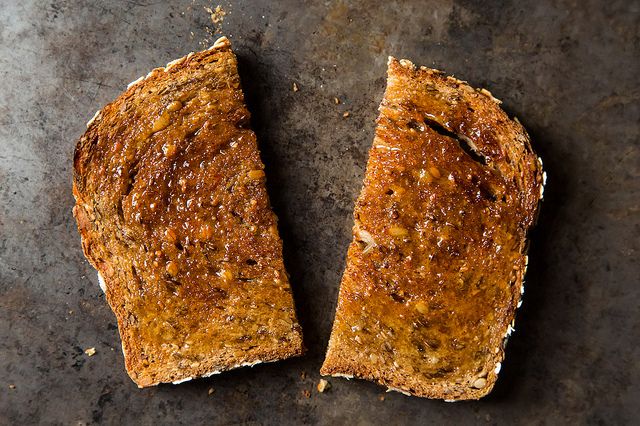 I've included my recipe for maple cinnamon toast at the end of this post (with a Genius technique suggested by Kristen Miglore that involves melting butter and then mixing in maple syrup and cinnamon). But first, here are some other suggestions for simple finger foods to give your baby when he/she is ready:

• Cucumber or red pepper slices
• Clementine segments
• Slices of apple or pear (pears should be on the firm side, or they can be too slippery)
• Cooked broccoli florets, chunks of carrot, string beans, etc.
• Semisoft cheese, like Gouda
• Biscuits or other chewy bread (Clara has taken a shine to croissants)

PassTheKnife December 8, 2012
Clara is beautiful! I have two very small boys. Their favorite early finger foods? Tiny bits of filet mignon, blueberries and grapes cut in half (use that amazing cherry tomato cutting technique I learned here where you slice a bunch between two tupperware lids), Parmesan chunks, black beans, and bits of steamed and seared carrot. And I found "finger food" is a relative term that means clean foods to adults, but (at least my) kids don't care about that. They really preferred getting little clumps of food - even chopped spinach or mashed sweet potato - lined up on their plate over getting fed by a spoon. They learned that pincer motion fast!

LetaBee December 2, 2012
My oldest son was very independant when it came to feeding himself. So I would put out some 'tapas', aka an ice cube tray, with an assorted mix of chewable food. Whatever I wanted him to eat went in first.. then the spaces were filled with more goodies were added as the meal progressed. He loved cooked apple chunks (skin off), shredded cheese, grapes cut in 1/2.. all in their individual spaces, green scrambled egg (a spoonful of spinach puree cooked with the egg).. whatever we were eatting deconstructed
BTW Everytime you post a photo of Clara munching away I am positive the fertility rate of your readers spike.. She is so sweet!

@lorinarlock: We did the tofu thing too, but only when we were in Chinatown and got it fresh ..if I didn't eat it first:)

Jennifer13 December 2, 2012
I can't wait until Simon is old enough to try these! Keep the Clara corner coming!

Lori L. December 2, 2012
One word: tofu! One of the challenges I had when Josh was a baby was getting him to eat anything with protein. Enter tofu, which he continues to love today. It's easy and there are lots of organic brands.

Christina @. November 30, 2012
Hi Merrill, although this is not finger food, I wanted to tell you about orzo (with your Italian experience, you may already know about it, but just in case you don't.) It's an Italian barley drink and when poured over toast, is a great breakast for babies, toddlers, teens and college students (yes, my fifteen year old still eats it before rushing out the door with more bags than I carried around Europe, and my college sophomore son still wants it when he comes home!) I bet Clara would love it. Here's my post on orzo: http://christinascucina.blogspot.com/2012/11/orzo-coffee-substitute-barley-drink.html

AntoniaJames November 28, 2012
Cold watermelon rind, with just a bit of the pink stuff left and the green rind totally removed, was a favorite with my teething babies. Sticky as all get out, but tasty, I guess, and with just the right about of give to ease the pain. ;o)

Westminstress November 28, 2012
Just be careful with the apples - they're actually a common choking hazard bc they tend to break apart into chunks.

AntoniaJames November 27, 2012
Wonderful! Brings back memories of the baby and toddler in their high chairs biting away at toast, when the older one (now an aspiring filmmaker/screenwriter, I might add) realized that by biting it a certain way, he could turn his toast into a small pistol. Which he did, and then transformed his brother's toast the same way, so the two could have some mealtime fun. Important parenting lesson: You can declare your home a de-militarized zone (and our kids watched absolutely no TV or videos until the oldest was about four), but you can't prevent pre-verbal males from turning your dining room into an armament factory. Love the maple cinnamon toast! ;o)

mommychef November 27, 2012
try rolling your fruit in some of that powdery baby-cereal stuff. My baby wouldn't eat any of that pablum but when I rolled slippery pieces of banana or melon in it - it really did the trick!

aargersi November 27, 2012
I don't really know anything about babies except that you have a REALLY cute one. Like, ridiculously cute.

lastnightsdinner November 27, 2012
Love it. And I read somewhere when Julian was cutting his first teeth that there is a compound in raw cucumbers that helps to soothe their gums? I guess it's actually used in some over-the-counter teething remedies. I'd give him a spear to hold and gnaw after I scraped the seeds out with a spoon :) We will definitely try your yummy-sounding toast soon!

Elycooks November 27, 2012
Tips for a teething babe - frozen bagels. Or tough, chewy bagels at any rate. These got me thru many a grocery shopping expedition.

Cucinista January 2, 2013
...and tied on a cotton string around their necks prevented dropping them!