Today: Catherine King gets back on the sugar bandwagon for Joy the Baker Cookbook. 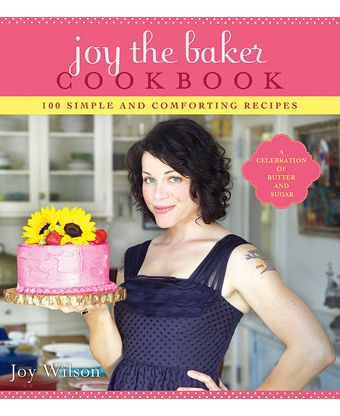 I have a bone to pick with this book. Namely, because I began 2013 determined to abstain from sugar for the month of January, and just one glance at Joy the Baker Cookbook utterly destroyed my will power. Truth be told, I had hardly made it through a sugar-free week when I agreed to review this book, jumping a little too eagerly to bask in Joy's self-titled celebration of butter and sugar. The clever among you may argue that this says more about my will power than it does about Joy's recipes, but in my defense I can only reply: Peanut Butter Cream Cheese Frosting! Toasted Coconut Dutch Baby! Chocolate Bourbon Spiked Banana Bread!

Looking to ease into the sweet-factor, I began my foray with Cornmeal Molasses Pancakes and Blackberry Vanilla Sauce. Though I was weary of the oddly lumpy cake batter at first, the heady, summertime scent of simmering blackberries and vanilla quickly distracted me. By the time I took my first bite the batter lumps were long-forgotten, replaced by the taste of lightly crunchy corn cakes in a slurry of warm, syrupy berries. I could have lived without the molasses this recipe called for, and two tablespoons of batter seemed awfully small for each cake, but these were personal preferences that I would happily tweak on the next go-around.

After that, I tried the Single Girl Melty Chocolate Cake on a whim one Friday night and was not disappointed. Though my single girl days are long-behind me, this rich, single serving of chocolate cake spoke to my heart, coming together in under 30 minutes start-to-finish. Finish, in this case, referring to the point at which you find yourself licking an empty plate and wondering in a daze what happened to the cake you just made.

Then: fluffy, ginger-scented raspberry scones, a tasty leek and asparagus quiche, and a cream cheese and peanut butter slathered brownie that garnered acclaim as "Best Bribe" during a little friendly office competition. The only disappointments came with a breakfast of Baked Coffee Cake French Toast and the book's aptly-titled Coffee Bacon. The former seemed rich with potential, but the result was only so-so, hindered by an imbalanced crumb-topping-to-bread ratio. The latter, with its blend of fresh coffee grounds, chili powder, brown sugar and molasses, resulted in an overpowering flavor that all but masked the bacon it was meant to enhance.

Still, these letdowns were comparatively minor. After testing nearly ten of Joy's recipes, I'm still eager to return to the dozen or so more dogeared pages waiting for me. In the end, what won me over was Joy's simple, unfussy approach to baking. I wouldn't call this collection groundbreaking, and its puzzling chapter breakdown makes navigation tricky, but it's otherwise hard to complain about a book that provides so many recipes I imagine adding to my regular baking repertoire. For all of this, the Joy the Baker Cookbook has earned its place on my bookshelf, albeit tucked behind some of my healthier tomes -- lest I get carried away.

wendy H. February 18, 2013
Hmm I have recently sworn off buying anymore cookbooks - again! Looks like I might have to reneg on that. Great review and it sounds like great baking.

Sauertea February 15, 2013
Great review. I have to confess, I have been cooking from the book since last year and would have loved to write the review, but alas was too late. I love the book and vintage feel of the photos. The blueberry pancakes are amazing. The Texas Sheet cake rocks. The brown butter banana cake is also one of my favorites. I agree with you about the baked French toast, I thought it must have been me. You really do the book justice!! I think it should be in everyone's kitchen.

luvcookbooks February 13, 2013
The Oatmeal Cookie Pancakes and Avocado Pound Cake from this book were both delicious! Both of them were easy and took an ordinary recipe up a notch!! Really like her down to earth ness and kitchen tips, too. Thanks for the ideas on other recipes to try... evocative writing. I cannot wait to try the cornmeal pancakes.

hardlikearmour February 13, 2013
OH MY! The recipes you describe sound dangerously delicious. I wasn't interested in this book before reading your review, but have definitely been swayed!
Author Comment