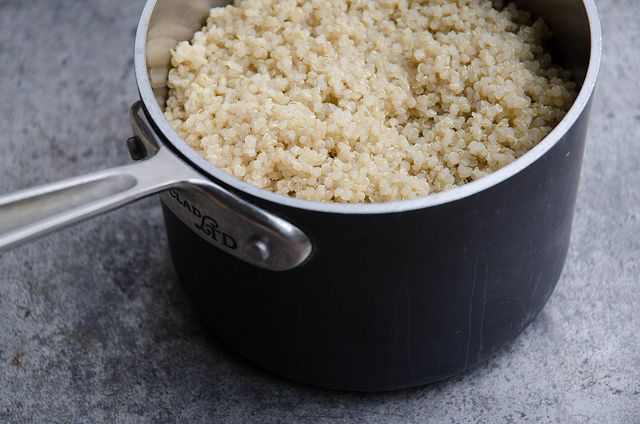 My friend Steve once spent a long day biking in Northern California with a fitness-obsessed colleague. They talked a lot about getting in shape, how to work out, what to eat. "Quinoa," the guy says. "Total superfood. Protein, nutrients, general awesomeness." Steve thinks, "right, I can do quinoa. Not exactly at the top of my bucket list, but okay. Eat more quinoa." Flash forward to the rest of Steve's super-fit life: rock-hard abs, gorgeous blood work, and total, utter joylessness.

More: Are wheat berries more your style? Make a week's worth of dinners out of those, too. 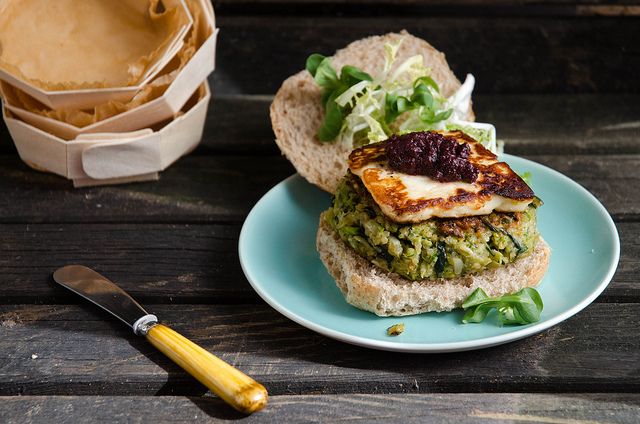 Quinoa, Fava Bean, and Chard Veggie Burgers
I made a double batch of these veggie burgers last weekend and couldn't stop eating them throughout the week. Topped with a thick slice of grilled Halloumi and a dollop of olive tapenade, they made me want to stop dating other burgers for a while. Though not terribly demanding, this is the most labor-intensive of the week's recipes, so make it while you're still really excited about that pot of quinoa. The burgers hold together just fine with careful handling but are a little delicate, so I'd recommend making them smallish and cooking them in a pan instead of on the grill. 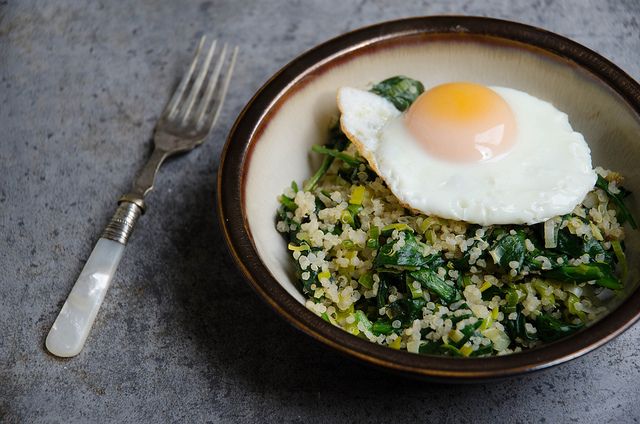 Lemony Quinoa with Leeks, Spinach, and a Fried Egg
On a night when you've only got a few minutes, sauté a couple of sliced leeks and three or four big handfuls of baby spinach in some olive oil in a skillet. Spoon in a cup of quinoa to warm through. Finish with a little lemon juice and zest, and top with a fried egg. This is one of my favorite dishes -- comforting but still bright and full of flavor. 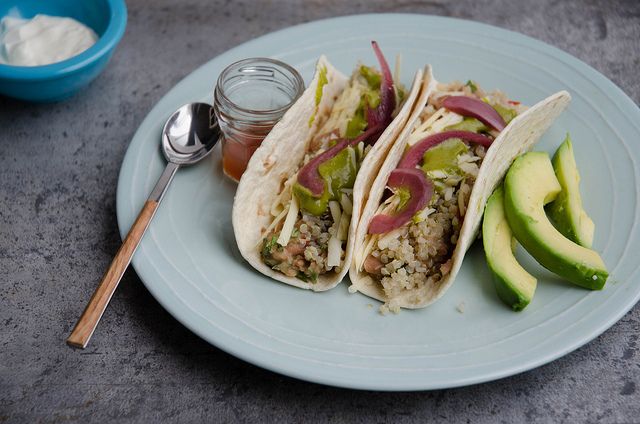 Pinto Bean and Quinoa Tacos
Bean tacos with the works have been a family staple and easy crowd-pleaser of ours for years, and adding some quinoa to the mix only increases this meal's superhero status. For the beans, sauté a diced onion, a green or red bell pepper, and a few minced garlic cloves in olive oil. Then add two drained and rinsed 15-ounce cans of pinto beans along with a cup of stock, a teaspoon of cumin, a teaspoon of salt if your beans aren't salted, and a teaspoon of chili powder. Bring the liquid to a boil, then simmer, uncovered, for ten minutes or so, until the beans and the now-reduced liquid have gotten over their awkwardness and really started to commune. Use a potato masher to magic the whole thing into a nice, textured purée. Then stir in some fresh lime juice and a big handful of chopped cilantro. We like to use flour tortillas and top with sliced avocado or guacamole, shredded cheese, cilantro sauce, and pickled onions. Yup, all of the above. No judgment. 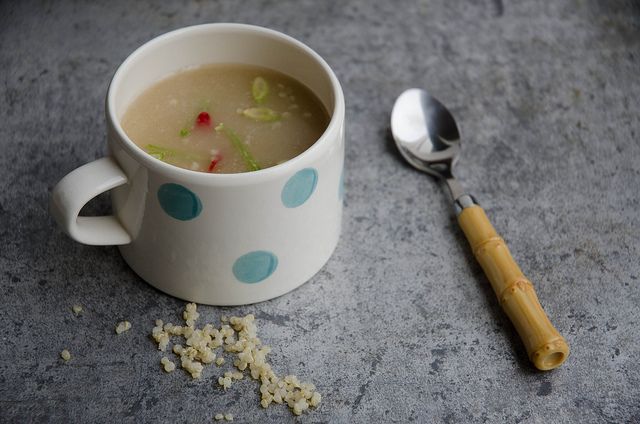 Miso Broth with Spring Vegetables and Quinoa
Miso broth is a genius among stocks. It's scrappy and simple to make yet has an incredibly satisfying, complex flavor. Try making miso soup a meal by adding some sliced shiitakes and scallions, julienned summer squash, and a big scoop of quinoa to this broth to cook for a few minutes before stirring in the miso. 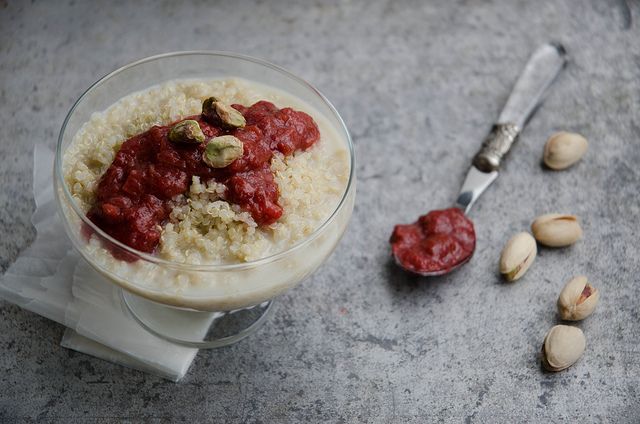 Quinoa Porridge with Rhubarb-Strawberry Compote
Craving something a little sweet by now? Heat up a scoop of quinoa with some milk (I use homemade almond milk). A sprinkle of cinnamon and nutmeg never killed anyone, either. Top with a nice dollop of rhubarb-strawberry compote and a few pistachios, and it's breakfast for dinner. Or for breakfast.

umamigirl.com
Carolyn Cope is the voice behind the popular food and lifestyle blog Umami Girl (http://umamigirl.com), where she'll soon be releasing a free e-book filled with easy ways to incorporate more healthy, plant-based foods into your life. A moody but enthusiastic reader, runner, musician, yogi, and family man, she is equal parts live-to-eat and eat-to-live -- and currently does both from London.

Elizabeth A. January 18, 2015
I plead ignorance, what is Hallourni?

anna K. August 4, 2013
Brilliant! I usually cook a big base batch of quinoa and add it to salad, stew or almond-milk-breakfast-yumminess throughout the week. Another great discovery was quinoa bibimbap. It's so easy to assemble when I'm not bothered being creative but I want something healthy and tasty.

Carolyn S. May 7, 2013
That lemony quinoa with the egg looks so simple and easy! Thanks so much Carolyn!

jRossM May 1, 2013
Question to the food52 editors: In the picture of the Pinto Bean and Quinoa Tacos, where is that spoon from???! I must have it!

Carolyn C. May 2, 2013
It's from Zara Home in London from last season. I think they've opened in the States now too. Good luck!

inspiredbyyou April 30, 2013
I found this Halfway to Dinner feature very disappointing. Perhaps I missed something, but it eems that all the recipes make the same mistake in that they put the flavor in the sauce or other components but they neglect to add it to the quinoa itself, which causes the very "ho hum, boring quinoa" reaction that you were trying to avoid in the first place. My suggestion would be to start with a batch of quinoa which is not quite finished cooking. When you go to add it to, for example, the taco filling, saute it directly with spices a few minutes and then add flavoring liquid to finish. This way, you create quinoa that has flavor unto itself and that will therefore contribute much more to the flavor of the dish it is going into.

tamater S. October 1, 2013
I never thought of doing quinoa like that, strangely enough, as I do this with rice.... Thanks a bunch for the hint, inspiredbyyou.

That said, I love your moniker and I'm psyched about the burger recipe, so thk you!

nomoreviolence April 28, 2013
What is a reasonable alternative to Hallourni (not available in the wilds of the Great Lakes)

Carolyn C. April 29, 2013
Feta would work really well for flavor, but I wouldn't grill it. If you can get a nice firm queso blanco, that would probably be the closest substitute that can be grilled. Good luck!

fudgefactor April 28, 2013
Yo! there are no links attached to the photos or titles.

Cathy G. April 22, 2013
So happy! Have been looking for some recipes with Quinoa.. timing is perfect, thank you

Fionat April 22, 2013
I wish we could pin the photos. I'll never remember to look back here for specific recipes.

Fionat April 22, 2013
Thanks! I wasn't sure if it was intentional or not, but my memory is not good enough to not pin recipes!

Kenzi W. April 22, 2013
I'm with you -- and it's definitely not intentional! As a temporary fix, you might try saving the post to your profile on Food52. Thanks for your patience!

Kenzi W. April 22, 2013
Another temporary fix: you should be able to pin the article if you use the pin button at the very top of this post!

Carolyn C. April 22, 2013
Thanks, Diana! It's no exaggeration that one of my favorite things about living in London is how cheap Halloumi is here compared to in NY. I don't mention that to just anyone, but I feel like we're in a safe space here.