Today: Amanda shows us how to update an old-school dessert. 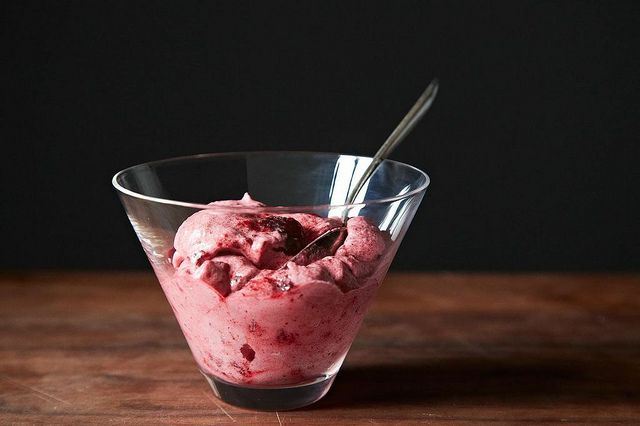 Back when it was acceptable to throw some chopped fruit in Jell-O and call it a salad, another, genius Jell-O dish was born. This unparalleled dish was, of course, Jell-O Fluff -- the bouncy and affable fusion of Jell-O and whipped cream. Jell-O Fluff became a beloved dessert for a number of years, and was then swiftly and heartlessly discarded by the next generation.

There are two schools of Jell-O Fluff -- those made with whipped cream and those made with Cool Whip -- and they might as well be the Yankees and Mets of the Jell-O world. Their fans can not stand each other. The whipped cream fluff camp sees itself as superior, Jell-O elevated. The Cool Whip fluff camp believes it is the fluff of the people, a little fake in flavor but more authentic.

I don't want to sway you, but coming from the whipped cream fluff camp, all I can say is that our version is much better. Cool Whippers, my gloves are off!

My mother made Strawberry Fluff, which meant that after concocting a batch of strawberry Jell-O, she whisked cream into it until it turned a voluminous electric pink. Then she spooned it into glasses and put the fluff into the fridge to chill before dinner -- during which time it would gain a thin skin on the top, a detail I always liked.

These days, I'm less fond of strawberry Jell-O, though fluff still ranks high in my food memory. I wanted to recreate the magic, but this time with Jell-O made from scratch. (Note to Cool Whippers: Jell-O is about to be under siege as well.) There's one berry that I think goes better with whipped cream than strawberries, and that's the blackberry. 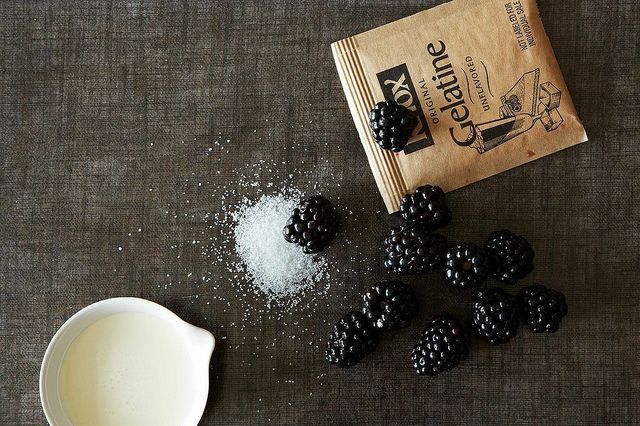 Making Jell-O from scratch is no big deal, it turns out. You need to juice the fruit, and with berries this is easy because all you have to do is add a splash of water and a little heat and they begin collapsing and juicing. 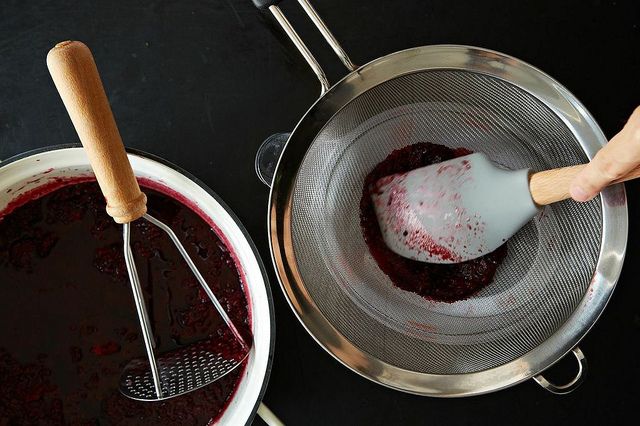 Press them through a sieve, using the back of a spoon to extract as much juice as possible. Measure the juice; you'll need 1 3/4 cups.

Pull out 1/2 cup of the blackberry juice, and sprinkle it with the gelatin. My juice was so thick, I had to add 2 tablespoons of water to get the gelatin to hydrate and bloom. 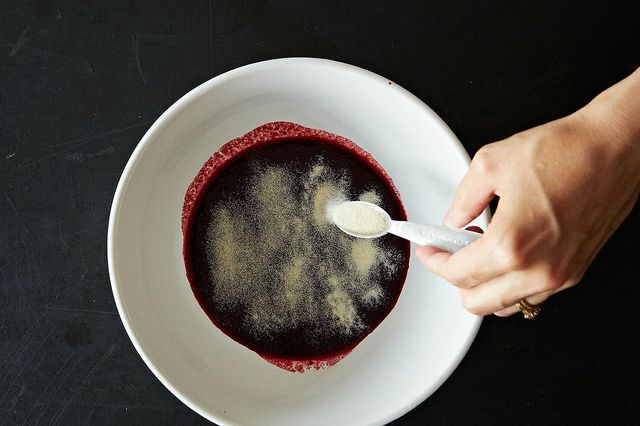 Meanwhile bring the remaining juice to a boil, add it to the gelatin, stirring the mixture until smooth, and sweeten it with sugar. Then into the fridge it goes until it's firm. 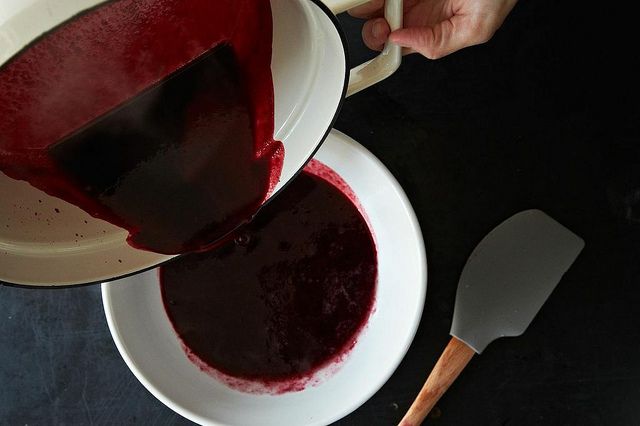 Once the blackberry jello is firm, fold lightly sweetened whipped cream into it. At first it'll look deliciously messy and lumpy, but eventually the color unifies and the chunks of jello reduce to bits. My mother used to whisk hers until it was smooth, but I like the lumpy bits and suggest you leave them in. 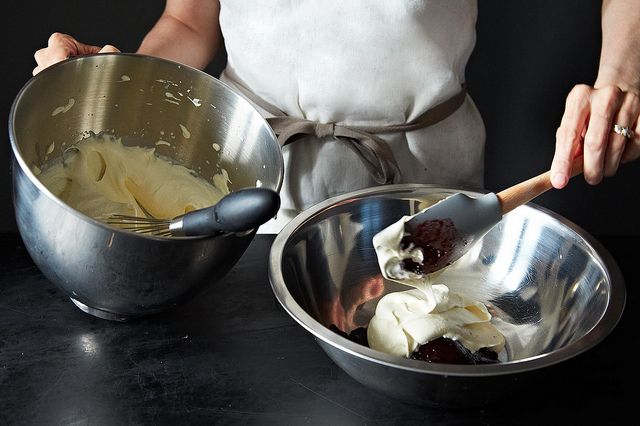 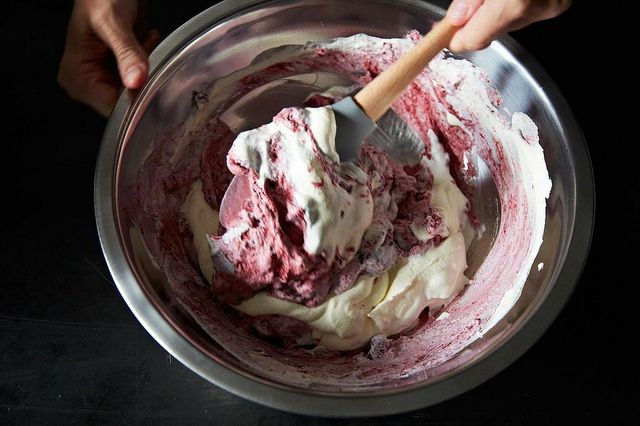 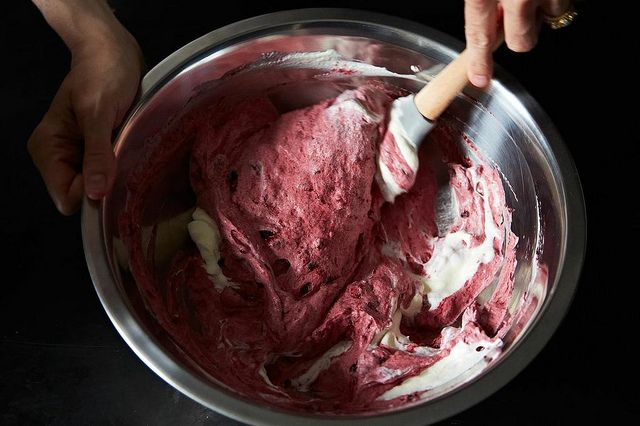 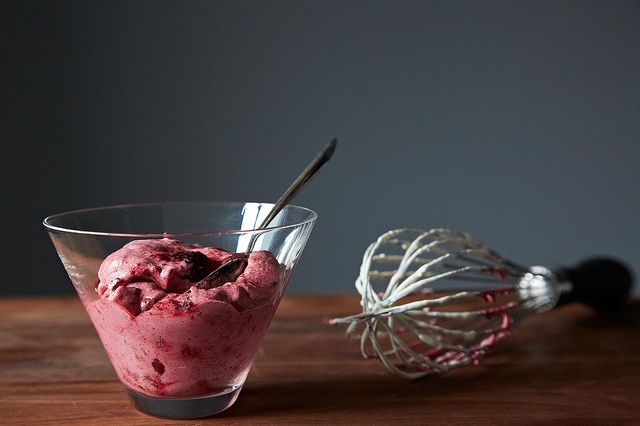 And that is how you make modern Blackberry Fluff.

beejay45 August 8, 2014
We never really ate Jello when I was growing up, so I never heard of Jello like this until I was in my 20s and someone told me about it. I made it once, with Cool Whip, but my friend told me to just wait until the Jello was cool, not set, then fold it in. It made a uniform pink mousse-like concoction, which tasted okay (except for the fake cream odor), but wasn't something we ever wanted again. Guess you had to grow up with it. I may give something like this a try though, something "like" this. ;) Love blackberries so this sounds especially tempting. Thanks!

jenkaa55 July 29, 2013
The idea of "jello" made with real fruit juice (never thought of it, don't know why) makes my mouth water! It reminds me how I hate commercial grape jelly and how one year my mom was given a huge batch of concord grapes and made homemade grape jelly. It was AMAZING! I imagine your "fluff" is, as well.
Author Comment

SaucyCuisine July 8, 2013
Jellified organic fruit juice with some fruit pieces. Now all I need to do is whip in the cream. Yum!!

Tracé H. July 7, 2013
i love reading all of these post. jello was one of my families tried and true 'food-stuffs' with 'jello-fluff' as a fond dessert memory. My mother, too, would use dream-whip for the whip, that is until we moved into the country. There we had fresh milk and all of the cream one could wish for. Once mother used real whip, there was no turning back. She did however modify the recipe and started to fold yoghurt into the mix~ her idea of making the dessert a wee bit healthier.

Pat G. July 7, 2013
From Oklahoma and a long line of wonderful cooks. Dad worked for General Foods which at the time was responsible for Jello! We had Jello themed everything. Our Jello fluff was more of a dessert. Graham cracker crust, jello with some whipping cream beaten into it, and graham cracker dusting over the top. Very light, cool, and tasty. Don't mess with Jello lovers....

Mary R. July 7, 2013
I was so excited when I saw the title for this recipe, but as I read on, I realized it wasn't the same as I grew up with. First I'm 71 yrs old, and this recipe was handed down from my mother's great aunt to give you an idea of how old the recipe must be. We called it Strawberry Fluff". You slice up 1 cup fresh strawberries and stir with 2 cups of sugar until nice and juicy, then add 2 egg whites. Put bowl along with beaters into the refrigerator for an hour to get nice and cold. Then beat at highest speed of your electric mixer until the mixture get a light pink with a marshmallow type texture. It will probably take about 15 minutes. Then take a slice of your favorite yellow cake, split it in half and put half into a small bowl. Scoop strawberry fluff on top and top with fresh strawberry slices, then repeat the layer with the other half slice of cake, fluff and more sliced strawberries. After tasting this, you'll turn your nose up at strawberry shortcake. Enjoy!!! [email protected]
Author Comment

Amanda H. July 7, 2013
This is so interesting -- it sounds similar to recipes called "Apple Snow" from the 19th century. It was made by whipping apple puree into a meringue for a very long time (some recipes say for 40 minutes!).

Greyhoundgirl July 7, 2013
Is there a non-animal substitution for the gelatin? This sounds delicious.

Kitchen B. July 3, 2013
Never ever heard of jello fluff-growing up in Nigeria, we had jelly and evaporated milk drizzled over the top. So for me, this is a welcome new world where jelly translates into cool chic a la mousse. I'll have to try it, probably a strawberry or forest fruit version!

Barb C. July 2, 2013
I remember Jell-O fluff but I have the feeling my mom used --gasp--Dream Whip as opposed to Cream or Cook Whip. I seem to remember boxes of the stuff in the pantry. Not a huge fan of Jell-O (probably because I was forced to eat it with Dream Whip) but I'll give this authentic version a try. But AntoniaJames I really want that Blue Gin Fizz recipe.

Fairmount_market July 2, 2013
This reminds me of the recipe for tapioca flamingo from your NYTimes cookbook, which uses tapioca rather than gelatin as a thickener. I made it recently with crushed strawberries and buttermilk in place of the juice and it was spectacular.

AntoniaJames July 2, 2013
I'm totally in the small lumps of Jell-o camp, by the way. And Cool Whip? Never. (I don't put anything in my mouth that has "propellants" as an ingredient including, incidentally, cooking oils out of a spray can. Not to mention that Cool Whip tastes awful.) ;o)

Aileen M. July 2, 2013
Growing up in Scotland, fluff was made of jello whipped together with a can of evaporated milk

Sophia H. July 2, 2013
Wait no ambrosia, my mom was the queen of the cream cheese version of it. :) She made it for all the family dinners. She also made jello eggs with real egg shells, I tried it once did not work so well.

Loves F. July 11, 2013
Every time I hear ambrosia I think of Edward Scissorhands! (The town hussie brings the ambrosia salad).

Nancy M. July 2, 2013
It isn't the taste but the fact that it coats the roof of your mouth with a nasty slick of oil that makes Cool Whip a turn-off for me. It just takes a minute and no skill at all to whip a little cream so there is just no excuse. But I will not be making my own jello.

AntoniaJames July 2, 2013
Ha! I have several jars of thick blueberry juice I canned late last summer to use in making blueberry curd (which is wonderful stuff, but I realized a bit after the fact that I'd canned far more juice than one would ever need in a non-commercial setting). We've been using it for "Blue Gin Fizzes" but it seems like it would be perfect for this. I seriously feel a project (an easy one!!) coming on . . . ;o)