Today: A gluten-free cake from the mountains of Alto Adige. 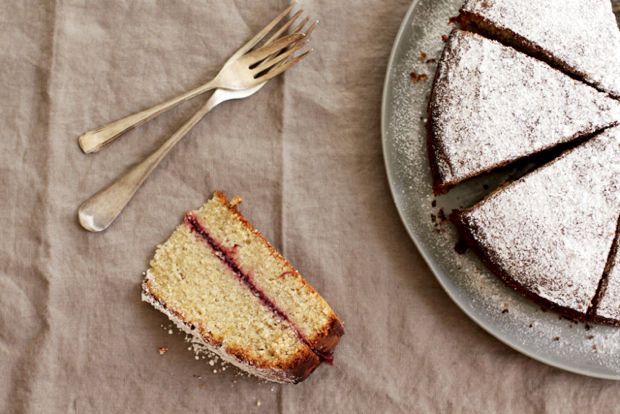 Like so many Italian regions, there is a distinct link between the geography of the place and the local cuisine. Bordering Austria and Switzerland to the north and the regions of Lombardy and the Veneto to the south, Italy's most northern region, Trentino-Alto Adige, has carried influences from its neighbors into its kitchens -- and is governed by the local ingredients of the montainous region.

Known as schwarzplententorte in German or torta di granosaraceno in Italian, this is a very traditional recipe that reflects all of these aspects. It's a simple, gluten-free cake, made wonderfully moist and dense with buckwheat, almond meal and grated apple, then filled with tart lingonberry jam and topped with a veil of powdered sugar. It's usually eaten for breakfast together with a big mug of caffe latte -- or as a morning or afternoon snack.

German and Italian are both official languages in this region, but the fact that this buckwheat cake has a German name indicates that the origins of this recipe are from the northern part of Alto Adige, around Bolzano. It's also the only place where apples have a DOP (Protected Designation of Origin) status in Italy, and, as you'd expect, many traditional desserts call for them (think fritters or strudel). In this cake, the apple seems to almost disappear and melt into the cake crumb, adding moisture and sweetness. 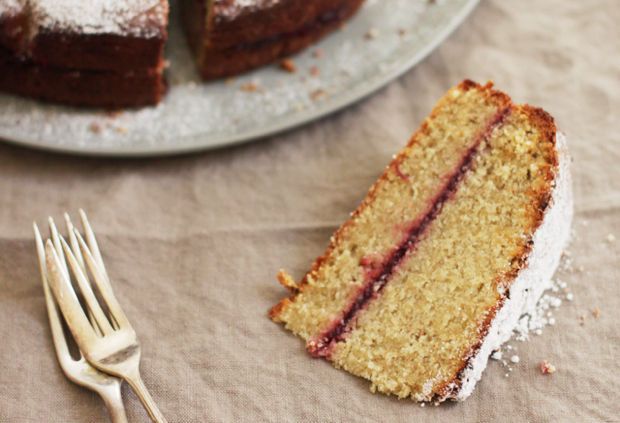 It's quite common to find buckwheat (a seed, not actually a wheat, despite its name) grown in mountainous areas where regular wheat can't grow -- and it's found in a number of typical Altoadesian dishes, including pasta.

The basic version of this recipe is without the apple (it can easily be eliminated from the recipe without changing the other proportions), while the oldest versions of this recipe call only for buckwheat flour, with almond meal (usually made by grinding whole almonds, skin on) being a modern addition that adds to the dense crumb of this cake. Obligatory is the filling of lingonberry jam (also known as mountain cranberries) -- you could substitute cranberry or redcurrant jelly if you can't find this jam, but if you do want to seek it out, try Ikea (lingonberry jam is also a national staple of Sweden!).

It's an extremely simple recipe that needs no added rising agents, as the six eggs do the trick -- the whites are beaten until stiff and fluffy and folded in just before baking. The result is a moist, sweet cake, which only seems to get better with age, with a hint of savoriness from the buckwheat and sharpness from the lingonberry jam. 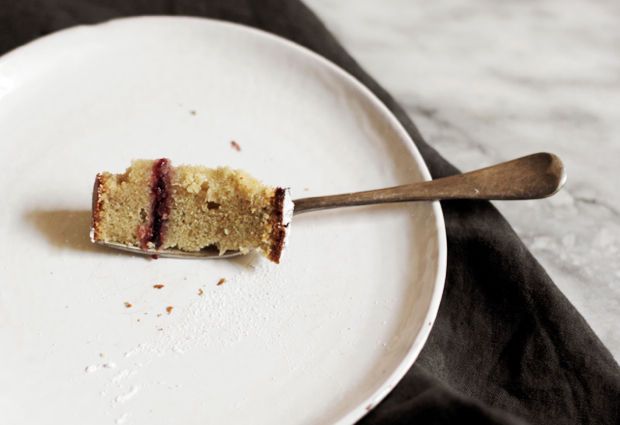 designforsolar October 24, 2013
I loved the idea of this cake--traditional gluten free recipes make my heart go pitter patter. But the vision didn't turn into so great an action. My buckwheat flour is sort of an asphalt gray color (Arrowhead Mills) and made the cake that same, dull, heavy color. What brand results in the golden crumb for this recipe? Also, I found the batter to be exceedingly thick and sticky; folding in egg whites was defeatist at best. The resulting gray cake tasted fine, if not remarkable, and was incredibly dense, totally unlike the delicate crumb pictured above. Help? Did anyone else have these results? Brand of buckwheat flour or high-altitude to blame? Thanks.
Author Comment

Emiko October 24, 2013
Hi, I used an organic, stone-milled buckwheat flour that I buy in bulk from my local organic shop. I believe the golden crumb also comes from the almond meal, which can be with or without skins (with skins, the result is a speckled brown cake, of course!). The batter is indeed very thick, the whites need to be folded in little by little and that lightens up the batter. I've made this several times, always with the same results like in the photo above - once I even made it with buckwheat pancake mix as I was on holiday and couldn't find regular buckwheat flour! Sorry to hear it didn't work out perfectly for you and that I can't help more with the results - I'm not sure about the effects of high-altitude on this cake.

designforsolar October 24, 2013
Thanks for the thoughts on color from almond skins and/or a different buckwheat flour. I'll try weighing the flours, rather than using the cup measurements, to help with the density. Good to know that the batter does tend to be more thick; I wondered when I incorporated the egg whites if it was supposed to be so. I'm wondering about adding in an additional egg white to help with the high altitude--I didn't get much rise either. I have high hopes for getting a result like yours! Look forward to trying it again. Appreciate the feedback.

breadwhisperer October 9, 2013
I'm not gluten-free, but I just happened to have a gifted jar of lingonberries in my fridge, and buckwheat and almond flours in my freezer - so I figured it was meant to be. I'm now nibbling on a piece of this cake with my coffee as I type this! I only had a 9 inch springform pan, so it required a longer cooking time to get the cake done all the way through. And I added about 1/2 tsp of salt to the batter, because everything's better with salt :) Thanks for sharing this recipe!
Author Comment

Sophia H. October 8, 2013
Hm, looks good. I think it would work with pumpkin puree and cranberries, instead of apple and lingonberry. :)

Marisa R. October 8, 2013
I have a buckwheat cake recipe too and it is delish..I will have to try this one...great for GF diets as well