All this week, our friends Allison and Matt from Robicelli's will be sharing recipes from their cookbook Robicell's: A Love Story, with Cupcakes, hosting a Twitter chat, answering our questions, and giving away a book every day.

Today: A cupcake that is cryptically familiar to one of the Robicellis' favorite candy bars. 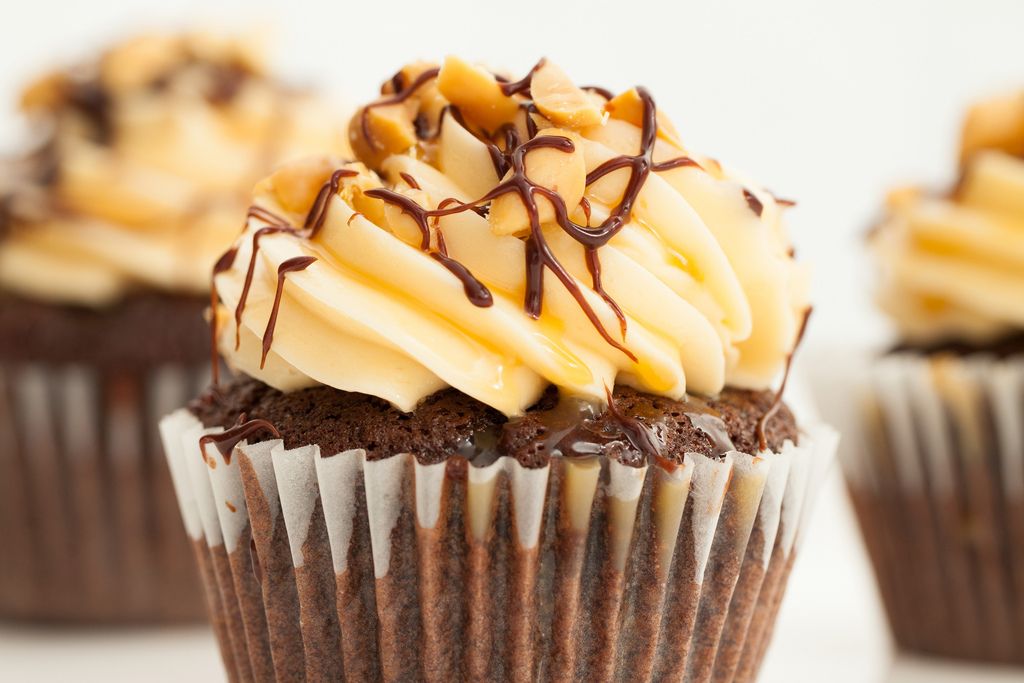 I remember our son Atticus’s first Halloween so vividly: He was seven months old, yet we still took him trick-or-treating, because, honestly, what’s the point of having an adorable baby dressed as a lobster unless you can use him to score free candy? We still make our kids pay us out at least a third of their haul every year because candy is really bad for kids, and the kids shouldn’t be eating it. Matt and I are totally willing to sacrifice our bodies and eat all the candy to protect them.

We’re both incredibly partial to a certain peanuty, nougaty, caramel-y chocolate bar that we’re not allowed to say out loud, but we thought it would make an amazing cupcake -- and what do you know? It did make an amazing cupcake! For legal purposes we couldn’t name it after the mego-globocorporation that inspired it. Fortunately, our super-close friends over at Liddabit Sweets were also inspired by it, making their own candy bar version called The Snacker. So this cupcake isn’t named after Candy Bar X -- it’s named after the candy company that makes the tastier knockoff version of Candy Bar X, which gives us three degrees of separation between us and a potential lawsuit.

Matt says: Why Marshmallow Fluff instead of soft nougat? Because it’s pretty much the same thing. You can make your own Marshmallow Fluff if you want, but really, aren’t you already doing enough? Plus, the most common brand in stores is all-natural, HFCS-free, and very much like what you’ll end up making yourself.

Want to win a copy of Robicellis: A Love Story, With Cupcakes? Tell us in the comments: What candy would you most like to see in cupcake form? We'll choose one random winner each day, and announce them this Friday! (Unfortunately, we can only ship books within the US.)

Maria January 21, 2014
Almond Rocha would be a lovely cupcake

ZombieCupcake December 27, 2013
I know this question is old But figured out my dream cupcake, I even dare say I would eat it for breakfast flutternutter cupcake.

cookinginvictoria October 19, 2013
A Malteser cupcake -- a cupcake flavored with chocolate malted milk balls would be delicious!

Loves F. October 17, 2013
I think they hit the nail on the head with the "snackers" candy bar cupcake, but I guess if I had to pick something else... either almond joy, junior mints, or chick-o-stick!

enbe October 17, 2013
I agree with Cathy, an Almond Joy cupcake would be brilliant. Maybe I should start the experimentation...

G G. October 17, 2013
I'd love a Chunky-inspired cupcake, with the raisins and walnuts. One of my favorite drugstore candy bars is the "midnight" Milky Way. (Somehow never really liked the regular milk chocolate one though!) Also a big fan of tart-fruit options like Skittles or SweeTarts. I can't imagine those in cupcake form, but I'm sure the Robicellis would come up with something great!
Author Comment

Allison R. October 17, 2013
We make a Twix inspired cupcake! And it's AMAZING. I could eat Twix for every meal.