Stuffing Tips from the Food52 Team

Welcome to Blooper Week, where we'll be polling various cooks and food writers -- as well as the Food52 staff -- about their biggest Thanksgiving bloopers and their essential tips to avoid future disasters.

Today: We're sourcing stuffing tips and bloopers from the Food52 team. And we want to hear yours, too! 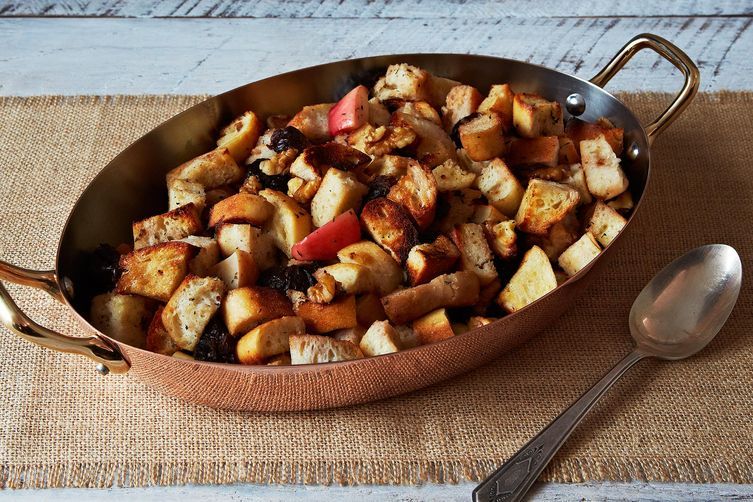 Of all the old favorites on the Thanksgiving table, stuffing may leave the most room for variety -- and for argument. There's stuffing, and then there's dressing, and there are issues of what you add to yours and where you cook it and whether it's wet or dry. There are fruits and vegetables and, sometimes, oysters. There's room for adaptation, but there's also room for disaster: We've all had soggy, or overly dry, or burnt iterations, and they were all a disappointment. A dish that binds together so many ingredients should, after all, be something you can depend on.

Today, we're sharing some of our staff's most clutch stuffing tips, to help you with yours next week -- and we're also sharing a few of our stuffing bloopers, to make sure you only follow in our most successful footsteps.

Christina: Stuffin' Muffins changed my world. We spent Thanksgiving with my sister-in-law's family the year she and my brother got engaged, and her family started spooning 3 different kinds of stuffing into muffin tins. The genius of it is that each scoop gets nice and crispy and everyone gets their own portion. 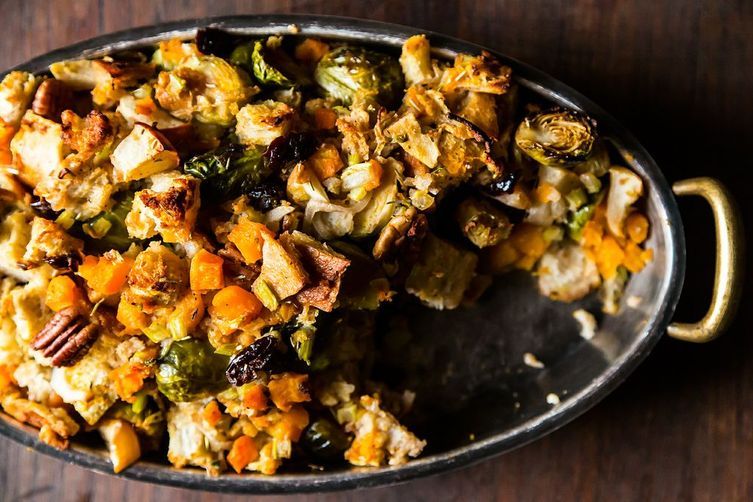 Rachel: My grandmother always had to have chestnuts in her stuffing -- be careful, as they explode in the oven if they aren't pierced first. This has happened to me!

Michael: David Tanis had a genius idea: Fold in chopped raw chicken livers before baking. I never won't do that.

More: Another way to serve chicken livers? In paté. (Go ahead -- feed it to your kids.)

Maddy: I think I've mentioned this recipe a dozen times, but I always make my mother's jalapeño cornbread dressing. The secret is to moisten it enough that the cornbread nearly disintegrates into the wet ingredients (chicken stock, egg, sautéed onion, celery, and jalapeño) so the baked texture is like a bread pudding.

Kenzi: Bursting chestnuts! I'm hopping on the blooper train. The first time I made Thanksgiving, it was at my parents' house, and it was before my loving mother and I realized that it's probably best for everyone if we cook separately during the thick of things. (Prepping vegetables the night before together? Great. Chatting over a glass of wine at the end? Grand.)

This past year, things got really frazzled somewhere in between the gratin and the butternut squash, and as we were trying to oven-jockey, our pan of perfect stuffing fell to the floor, cracked, sunk. We also fell to the floor. Things were vaguely burning in the background. And then we picked it up, salvaged what we could, and put it back in the oven. One hour later, we ate it. And it was good.

More: We've got a few handsome dishes to serve your stuffing in. If you're into that sort of thing. 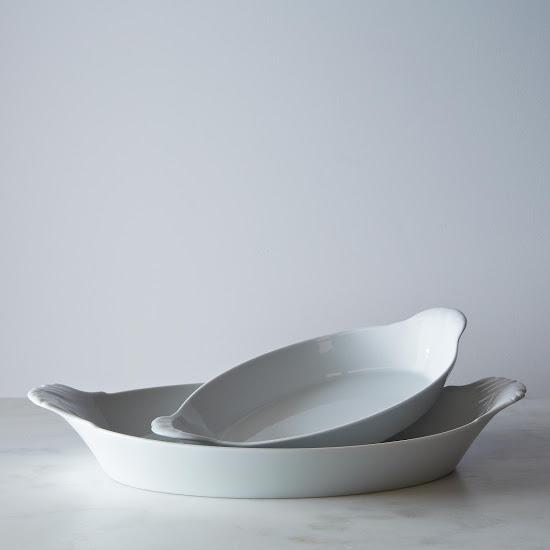 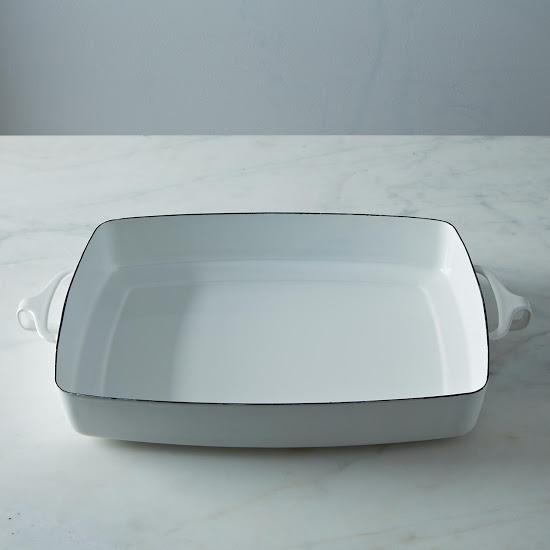 Amanda: Most stuffing is a thick mushy layer topped with a thin crisp layer -- too much mush to crisp. To change this up, spread the stuffing in a larger dish than your recipe calls for so you end up with 50% mush, 50% crisp.

Jennifer: Sausage makes everything better, and stuffing is no exception. Also, like Rachel, I love to use chestnuts in my stuffing (don't tell, but the ones in the jar work just as well as freshly roasted for a stuffing!).

Tell us in the comments: How do you make your stuffing? Do you have any stuffing disasters to share? (Don't worry. This is a safe space.)

Betty November 10, 2016
I use my usual recipe for stuffing, and cook it in the slow cooker. If it seems too moist, I crack open the lid for the last hour or so, until it is the consistency I want. The beauty of this is that it stays hot throughout the meal, so seconds are excellent. (I make mashed potatoes and put them in a second slow cooker, so they stay warm as well.)

handfulofsounds November 20, 2013
I may have to use the muffin tin idea this year. Any idea what the baking time/temp would be since it would be such a smaller surface area?

walkie74 November 20, 2013
One year, I decided to make Parker Rolls. They ended up very badly burned, but I was out of time and brought them to dinner anyway. My aunt and cousins refused to touch them--I haven't been allowed to make anything since. :p

Jennifer K. November 20, 2013
I only have one oven, which will be occupied by the bird. Any suggestions on making stuffing the day before? Can I under-bake it, refrigerate overnight, ad then reheat with a little added moisture? I have a great recipe, but no suggestions for make-ahead suggestions.

AntoniaJames November 20, 2013
Yes, you should do exactly that. I might drizzle a bit of fat, e.g., turkey schmaltz, over the top of it before reheating it. Take it out of the fridge about an hour before the turkey will be taken out of the oven. Put the stuffing in the oven as soon as you take out the bird, to reheat it while it's resting. It's important to get it up to room temperature so that it will warm thoroughly in the oven. Have fun! ;o) P.S. I would not underbake it by much . . . just make sure it doesn't brown too much on top. I'd cover it with foil after baking it about half of the recommended time. That way it won't get too dark when you reheat it.

Jennifer K. November 20, 2013
Thanks so much, Antonia. Glad to know I was on the right track, and happy for more great suggestions. Have a lovely holiday!

ChefJune November 20, 2013
I've known about toasting the bread for the dressing all my life. One of my very first kitchen jobs was to toast all the bread for my mom's dressing. I was probably 4. After reading all these posts, I realize what an important job I had! :)

AntoniaJames November 20, 2013
Love the suggestion to make stuffing in muffin tins. That is truly brilliant.
My blooper story:

My boys were young, and the only bread I had on hand was the soft half whole wheat, half white flour potato bread (Pullman loaf) that I regularly made in those days for the boys’ sandwiches. I hadn’t gotten the memo on toasting chunks of bread before making stuffing, or letting the bread sit out overnight to get stale. I also hadn’t ever heard of making stuffing in a casserole dish to get a nice crunchy top. I *had* gotten the memo on adding some broth to stuffing, but of course I didn’t pay any attention to how much, or under what circumstances; I doubt that my stuffing even needed it, but I added more than would have been advised, in any case. I also chopped up and added a couple of apples, which turned out to be nice and juicy.

You know where I’m going with this. When I took the stuffing out, it was a giant, if fragrant, blob of mush. The barely perceptible bits of celery (cut very small because it was not universally appreciated in larger pieces) and a few sad apple peels did little to help.

When it came time to serve up, both boys – who were generally pretty open minded about the food served in our house – looked at it with decidedly suspicious “You’ve got to be kidding” looks on their faces and moved onto the mashed potatoes. I put gravy on my lump of the stuff and thought it tasted pretty good, but was generally sympathetic with the boys’ “Not on my plate, thank you!” reaction.

Since then, all my stuffing has been baked outside the turkey. I eventually got the memo on toasting chunks of bread in the oven, so I’ve done that exclusively since then, as well, whether or not the recipe I’m using says to do so. ;o)

Soozll November 20, 2013
I like to ladle gravy on my dressing so I make dressing on the drier side. I handle my dressing the way I handle pie crust; I add the liquid, tossing it by hand to keep it fluffier, until it feels moist enough that it will bake semi-congealed. I like it just a little sticky. If I get it too moist, I add a buttered bread crumb topping on it. I do that because in the past, the top of the dressing would get crispy to the point of being too hard. The crumbs and butter are loose and crisp up just right! Well..for me, anyway.