Today: All week, Chad has been walking us through the recipe for his Oat Porridge Bread. Today, he's sharing a few more tips. Read them, learn them, love them, then go start your starter. 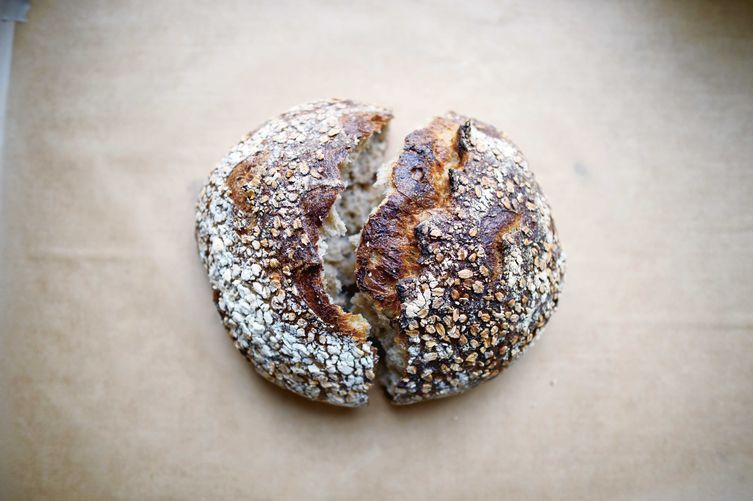 Here are the most important factors to keep in mind when you're baking naturally leavened bread:

Temperature of the environment: This dictates what yeast and bacteria will come into play, and what processes will take place. Naturally leavened, long-fermented bread is a microcosm and ambient temperature is critical in dictating the next steps of fermentation.

Patience: Bread baking is not an immediate process. There are many steps involved and many nuances at play. As the baker, you are constantly adjusting in response to these variables based on your knowledge of the medium -- and your patience.

More: For those of you with a little less patience, Chad has a speedier recipe: Apple Walnut Tea Cake.

Working with the nature of the dough: Like I started to mention above, dough is continually shaped by its environment -- a range of uncharted variables. Since there are so many ways little conditions can affect the final loaf, you’re constantly making slight adjustments. Baking bread is not about controlling the process; it’s about guiding the fermentation. You are there to act as a catalyst for what the dough naturally wants to do.

Depth of flavor and texture: My bread has a deep, crackly crust and a soft, moist crumb. For me, it’s a balance between these textures. Using high hydration, naturally leavened dough and initially baking at a high heat then lowering the temperature imbues each boule with sufficient oven spring and layers of caramelization.

Robert H. October 19, 2015
As a longtime home baker, I find Robertson's recipes unnecessarily complicated especially with temperatures and mixing by hand. Julia Child's croissant recipe, for example, is simpler and straightforward and produces better results than Robertson's. I also doubt that his bakery, obviously a smash success in SF, mixes and kneads breads by hand as he wants us to do.
Bob Hoover

farmersdotter November 19, 2014
I am curious how any small artisan bakery (that isn't a factory) can produce 3000 loaves a day? I have 50 square feet of wood fired oven space that does 70-75 loaves at a time. I can get three bakes done an evening. A fourth bake would be potentially doable. It takes all day (from 6 in the morning until sometimes midnight when we pull the last loaf) to make up starters & dough, proof, bench rest, shape and proof again. Then it takes time to load and unload the oven. Then it takes 20-30 minutes a bake depending on oven temp and variety. This is all I can manage with just myself and my partner.
3000 loaves a day blows my mind. I hope he had lots of staff!
Chad Robertson is an inspiration to be sure.