Today: With her recipe for nutritious, from-scratch peanut sauce, Phoebe Lapine from Feed Me Phoebe might single-handedly shut down the Chinese take-out industry. 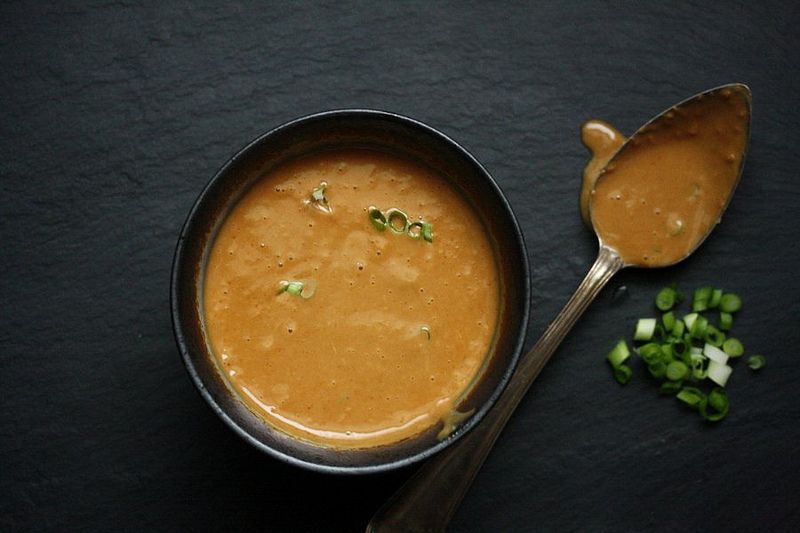 Despite the fact that I’m Jewish and spend almost every Christmas either at a restaurant in Chinatown or on my couch with a container of fried rice, I still emerge from the holiday season craving Asian food. Instead of turning to take out, I turn to my pantry -- and almost always, the most satisfying dish that results is a bowl of peanut noodles.

I’ve been making homemade peanut sauce since my early days as a food semi-professional —- there’s even an early recipe in my cookbook. But around the time that the cookbook came out (and about the same time as I was mainlining peanut noodles at every weeknight meal), I was diagnosed with a gluten allergy. 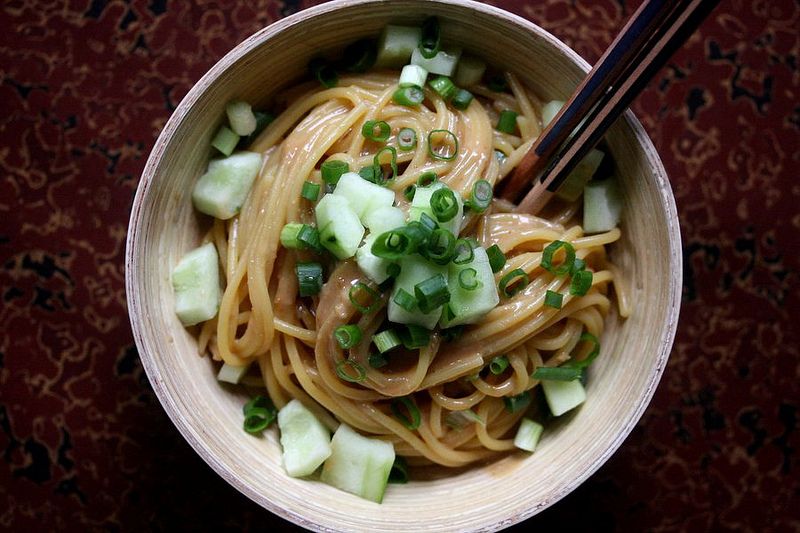 As a cuisine, Chinese food is not the most gluten-free-friendly. Luckily, the culprit -- soy sauce -- is relatively easy to avoid at home. I just substitute soy sauce with gluten-free tamari. It tastes nearly the same as soy sauce and in fact, and is almost ubiquitous at our markets today.

Peanut sauce couldn’t be easier to make: it’s as simple as blitzing a bevy of Asian condiments in a food processor alongside some garlic and fresh ginger, then thinning it with a little water. I’ve streamlined the ingredients over the years to omit Worcestershire sauce (a no-no for vegetarians), so that my peanut noodles can be enjoyed by even more people. I prefer honey to table sugar, but you can easily swap it out to make the sauce vegan. 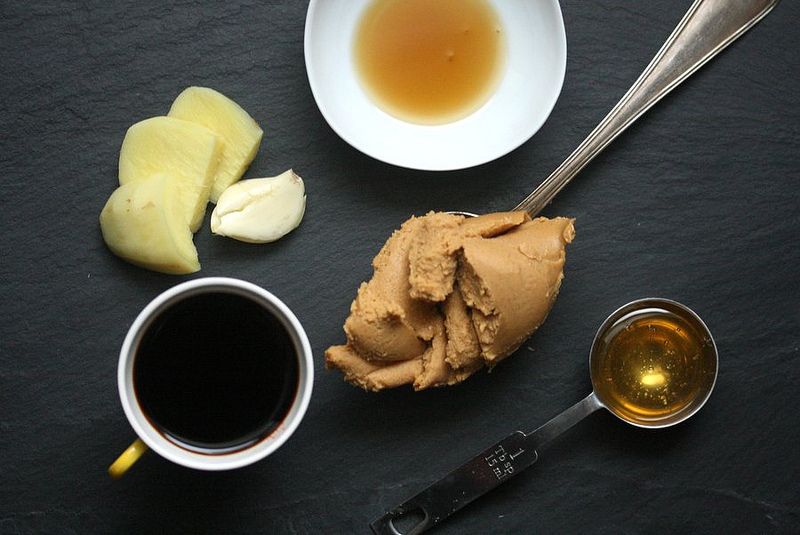 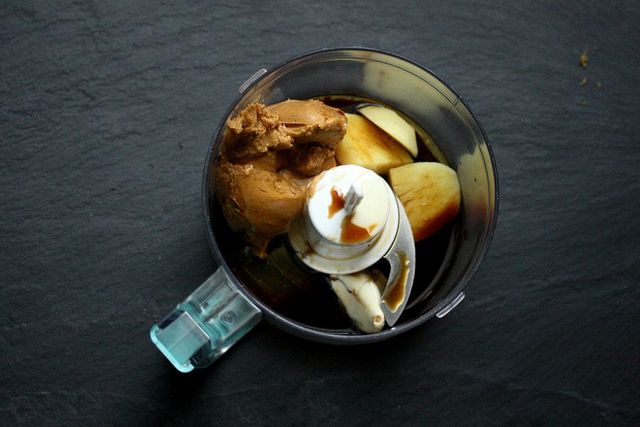 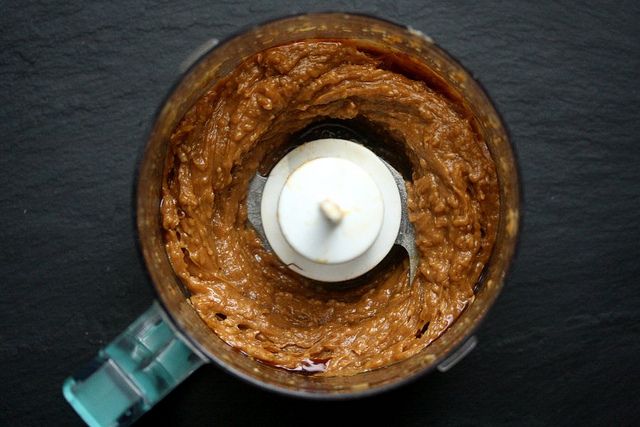 In a small food processor or blender, combine all of the ingredients and purée until coarsely combined.

Add 1/4 cup warm water and purée until smooth. Add more water as necessary, until the peanut sauce is similar to the consistency of ranch dressing. 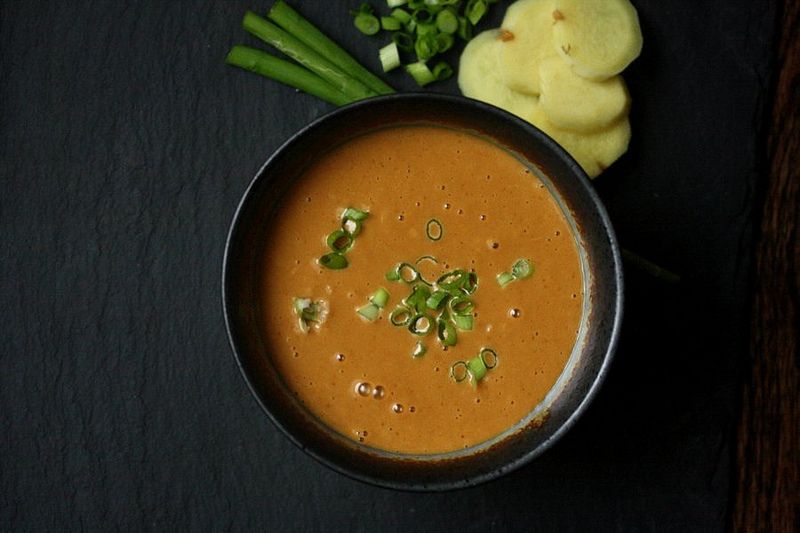 Garnish with scallions and serve alongside shrimp or chicken skewers, as a topping for a rice bowl, or tossed together with noodles. Extra sauce can be stored in an airtight container for up to 2 weeks.

feedmephoebe.com
Phoebe is a writer, gluten-free chef, culinary instructor, award-winning blogger, and author of The Wellness Project. You can find her healthy comfort food and gluten-free finds on www.FeedMePhoebe.com

Shanin B. June 23, 2015
Delicious sauce. Went down a treat! I didn't have any sriracha, substituted with a Nando's hot sauce that I had in the fridge and it gave the sauce a nice kick. I also served with cucumbers which was a perfect accompaniment and a great light summer supper. Thank you for this recipe!

Green R. August 16, 2014
Lovely! The ease of this recipe, as well as the taste, make it perfect! The fact that you use gluten free tamari really works for those who cannot tolerate gluten.

Great sauce thanks so much

karmaya July 25, 2014
they're similar, so why not? the indonesian sauce is spicier and funkier; has dried shrimp paste; you can find recipes online.

Karol E. January 27, 2014
I'm a celiac who is also very sensitive to soy. Do you think the Coconut aminos would work? I'm open to other suggestions. Thanks.

Joan -. January 5, 2014
I was about to store this away for a time when I was ready to pull out the food processor. Then I realized you make it in a little one just like mine. Now I'll pick up some ginger at the farmer's market and have peanut noodles for lunch and probably for dinner during the week, too. Thanks!

Melissa W. January 4, 2014
I am allergic to peanuts and have always wanted to try homemade almond butter sauce but could never find a decent recipe. This looks like one I could adapt. Thanks!

Lowell January 3, 2014
This looks delicious and I will be sure to try it. I have made a version of this type of sauce for Dan Dan Mian using Asian sesame paste which is supposedly more traditional but I know that many Asian restaurants use peanut butter for such sauces as in Satay and Dan Dan Noodles.

KitchenJoy January 3, 2014
Oh My! I am going to make this ASAP. It sounds marvelous! Thanksso much for sharing!