Today: edamame2003 lets Pok Pok transport her back to Thailand. 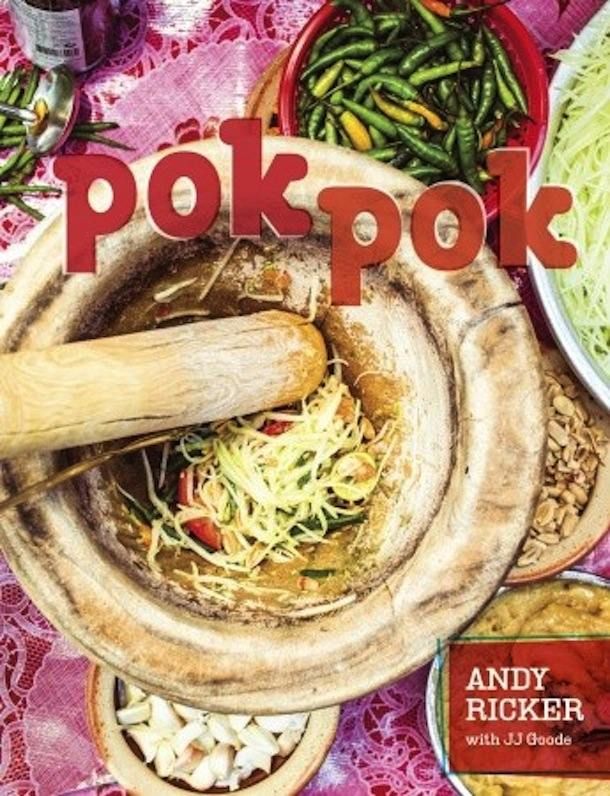 I open Andy Ricker's Pok Pok cookbook and almost forget that it’s written in English. My mind is playing a trick on me and I feel as if I'm reading a transcribed recipe from my mother, a Thai immigrant. It’s full of phonetic spellings, random measurement conversions, and a maze of steps and techniques I feel like ignoring.

But in this case, I don’t ignore them. I measure every ingredient as directed (even though, in any one recipe, I find amounts listed in ounces, grams, cups, and inches). I follow the recipes step by step, including the helpful sidebars of what can be prepped a week, day, and hours ahead.

My book has post-its on almost every other recipe. The pictures aren’t food-porned out with mood lighting in a studio. They are presented the way you might encounter a noodle soup with tripe and a cube of blood -- at a dusty roadside stand, with mopeds carrying whole families (none wearing helmets) whizzing by and elephants sauntering along -- and in that moment, it is authentic to this particular time and place.

I choose 3 recipes to make. The first is familiar -- a noodle dish that I make on a regular basis: Phat Siew. The ingredients are pretty straightforward, the only annoying one being the Naam Man Krathiem, a garlic oil that you have to make ahead of time. The instructions don’t warn you about this, so if you haven’t studied the recipe ahead of time, you wind up either making it at the time (getting hungrier and hungrier for your noodles) or skipping it altogether. I would vote for the latter. In a stir-fry, the key is to add the ingredients in a certain order, which Ricker painstakingly specifies -- and it took longer to read the directions than it did to actually make the dish. It’s not the order I usually follow, but it works. The cook times and technique are precise, and the result is probably better than what you would find at a restaurant. After you’ve made this once (and have the requisite thin soy, black soy, and fish sauce in your pantry), it’s a very easy and satisfying anytime dish.

More: Try a week's worth of recipes from Pok Pok.

Het Paa Naam Tok, on the other hand, was a dish I've never eaten or seen, on the menu at a Thai restaurant or even in Thailand. It's a vegan version of the popular Beef Waterfall Salad, making use of mushrooms to provide umami, and it even offers a vegan substitute for fish sauce by combining soy sauce and mushroom juice. It’s a clever recipe that makes you believe you can eat vegan and still enjoy great flavor and texture.

Finally, I made Sai Ua, a dish I’ve eaten and always wanted to know how to make. Sai Ua is a sausage, sometimes served on a stick from street vendors in Northern Thailand. Reading the recipe, you know you’re in for a project. There’s making the curry paste, and then there’s grinding and stuffing a sausage. On first look, it seems overwhelming. The ingredients will be difficult to find; the measuring is a pain in the ass. But it's more manageable if you follow the instructions step-by-step and break up the process. Once you have your mise en place, it’s just a matter of dumping and stirring. Combining the smoky ingredients of a Thai curry and an Indian curry created a totally new flavor -- one that isn’t spicy, but is deep and layered. Along with the fresh herbs, it’s bright and rich -- like nothing I had ever tasted. With this recipe, I felt I had been given a gift. A flavor that, up until now, had eluded me. I remembered eating this sausage in Thailand and not being able to find it again once I left that pocket of the countryside. Until now. And I think I can expect more gems like this through out the book.

The recipes aren’t easy. Ricker is uncompromising in his ingredients and offers few substitutions. But he provides explicit direction on techniques you wouldn’t otherwise know. I still think some of the steps overcomplicate, though I'd try the recipe once exactly as written before omitting anything.

The beauty of Pok Pok is that it isn’t just a bunch of recipes. It illustrates the time the author spent immersing himself in Thai cuisine and the respect he shows to its people and culture. The recipes are tasty, and so much more: they transport you. For me, it was back to Thailand and back to my childhood. If you’ve never been to Thailand, Pok Pok is almost as close as taking a trip. At first, it's dizzying and uncomfortable. Then it seduces you, and you find yourself addicted, chasing endless flavor combinations. It’s sometimes spicy, sometimes sweet, sour, salty. Often, it’s everything at once.

edamame-eats.com
I work in the entertainment business, and in my free time, I really enjoy growing my own vegetables, trolling my local farmers markets and trying to re-create yummy dishes I eat at my favorite restaurants. My son is a big influence on how and what I cook. He's my guinea pig and promises to try anything I make once. Luckily the recipes on food52 are bountiful and delicious.

stingraystirs February 23, 2014
Thank you for such an inspiring review! I just ordered the book.

edamame2003 February 22, 2014
you did an amazing job! it was like having my mom in the kitchen. great detail on the cooking and stories.

EmFraiche February 20, 2014
Having eaten at some of Ricker's restaurants, I can only imagine it was a daunting task to take on his cook book. Thank you for the great review!

edamame2003 February 22, 2014
thank you for reading. the recipes took some time. And the trip to the Asian store(s) were a whole day thing. but now I have a full pantry--I think thats half the battle.

jenna_lee February 20, 2014
Awesome review, edamame! I love your anaylysis and how your chose dishes you were both familiar and unfamiliar with. While I am not sure if I am quite ready to undertake the tasks of Ricker's recipes, you have me craving another trip to his restaurants!

Eliz. February 20, 2014
Such an evocative, engaging review! Very informative and very tempting. I don't know anything about Beef Waterfall Salad, so I will have to conduct a search to appreciate your praise of the second recipe you tried, but it is the description of Sai Ua that really makes an impression.

aargersi February 20, 2014
You make me want to take on the challenge in this review - knowing it's a PITA/project in advance sets the right expectation. Did you have to acquire gut to stuff the sausage into?

edamame2003 February 20, 2014
hi! yes, you can ask your local butcher for pig casings, or purchase online. It's a project. I made about 5 pounds and froze a bunch and so happy every time I grill these. The aroma is amazing. I think you'd have fun with many of recipes in the book!

healthierkitchen February 20, 2014
so well done, edamame! Your final paragraph is genius: "At first, it's dizzying and uncomfortable. Then it seduces you, and you find yourself addicted, chasing endless flavor combinations. It’s sometimes spicy, sometimes sweet, sour, salty. Often, it’s everything at once." Love it!

healthierkitchen February 20, 2014
Indeed it is, but such an apt simile (hmmm, metaphor? not sure which!) and so well written!

savorthis February 20, 2014
We had a potluck of sorts for Chinese New Year and my friend in charge of an app and vegetable asked if she could cheat and bring Thai food instead. I am so very glad I agreed. She made the chicken wings and an herby, lemongrass salad from Pok Pok and both were amazing. The pile of chicken bones we all accumulated was impressive. This book is definitely on my wishlist.