Today: MartineandJessica learn about cooking and history in Mastering the Art of Soviet Cooking. 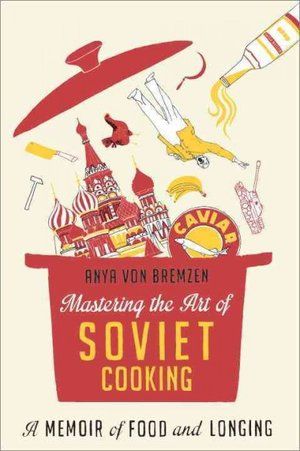 A literary mosaic cobbled from personal anecdotes, vibrant family history, and eighty years of Soviet history, Anya von Bremzen’s Mastering the Art of Soviet Cooking offers an intimate, humorous, poignant, and informative look into the tapestry of Russian life. The book takes you on a journey through decades of Moscow’s deprivations and excesses, and food is the unifying theme. In fact, food plays as significant a character as Stalin, Khrushchev, or Gorbachev in weaving together a tribute to family and to the resiliency of the Russian people.

Food is a central part of the human experience; much like von Bremzen, our own lives and stories -- from our respective hometowns of Port-au-Prince, Haiti, and New Orleans -- are woven around a love of food. Mastering the Art of Soviet Cooking is by far more memoir than cookbook, but what the pages lack in recipes, they make up for in illustrating the concept that food isn't merely functional. We immediately fell in love with this book primarily because its value isn’t in its recipes (of which there are barely any). Rather, its value is in its reinforcement of the idea that food is about people and experiences; it's about legacy and history and the expression of the times.

More: Check out our 5 Questions interview with Anya von Bremzen.

In an effort to review complementing dishes, we chose to cook Palov (Central Asian Rice, Lamb, and Carrot Pilaf) and Cornbread for Khrushchev (Moldovan Cornbread with Feta).

The ingredients to the dishes were similar to their French and Mediterranean bases (our comfort zone) but very different in their execution. For the stew, for instance, the lamb was browned, combined with slightly caramelized onions, then mixed with spices and grated carrots. Then you add uncooked rice on top of the meat and spice mixture so it steams, creating a complex, spicy, and intriguing one-pot meal. The rice was silky and rich, and the combination of turmeric, paprika, cumin, and lamb worked perfectly to create a delicious dish.

Though the recipe for the cornbread required fine yellow cornmeal, we decided to bake it two ways -- one with fine cornmeal and the other with medium ground -- as a test. Both were delicious, but the fine cornmeal worked much better to ensure a non-grainy bread that was more cake-like in texture, which we really enjoyed. We were skeptical of the feta at first, but it proved to smooth out the batter, and the grated pieces were delicious surprises in the finished product. The roasted red pepper added a bit of acidity and sweetness to a dish that we didn’t previously think needed either.

Although Von Bremzen's recipes are different from ones most cooks are accustomed to cooking, she manages to write them in a way that is simple to follow. We thoroughly enjoyed the book -- not only in a culinary context, but historically as well.

belleannee.com
Jessica Bride is the creator of Belle Année, a food and lifestyle blog dedicated to eating, drinking, living and loving in New Orleans and London.

AntoniaJames February 19, 2014
Thank you for the thoughtful, well-written and helpful review. It makes me want to get the book ASAP, which says a lot, as I generally don't find memoir-style food-related books particularly interesting. Best of all, I'm glad to have discovered you and your website, too, MartineandJessica! ;o)

jenna_lee February 17, 2014
One pot cooking is my favorite style of cooking- less clean up! I will definitely look up the interview you referenced as I would love to check out more of her recipes. Thanks for the heads up :)
Author Comment

Belle A. February 17, 2014
Jenna_Lee: The recipes were both really interesting because of the flavors and also the cooking technique, which was essentially one-pot cooking. I suspect the latter was born out of what was available in Russia. They hardly had 13-piece cooking sets at their disposal, right? The book only has a few recipes but she is a great story teller so it is worth it just for that. She was also interviewed in either F&W or Bon Appetit a few months ago and had a few recipes featured there also. You might want to look that up.

nancy E. February 14, 2014
Blah blah, book book...What are those delicious little parcels that brought me to this article?

jenna_lee February 14, 2014
I have tried her "sexy and mysterious" potato soup with fried almonds which was amazing so I am most definitely interested in getting my hands on this book! Both recipes Martine and Jessica sound like they have interesting twists to them.

healthierkitchen February 14, 2014
I loved reading this book, too, but didn't cook from it. These two recipes sound terrific. I did go back and find a copy of her 1990 cookbook of pan Soviet cooking - Please to the Table, which is really interesting!