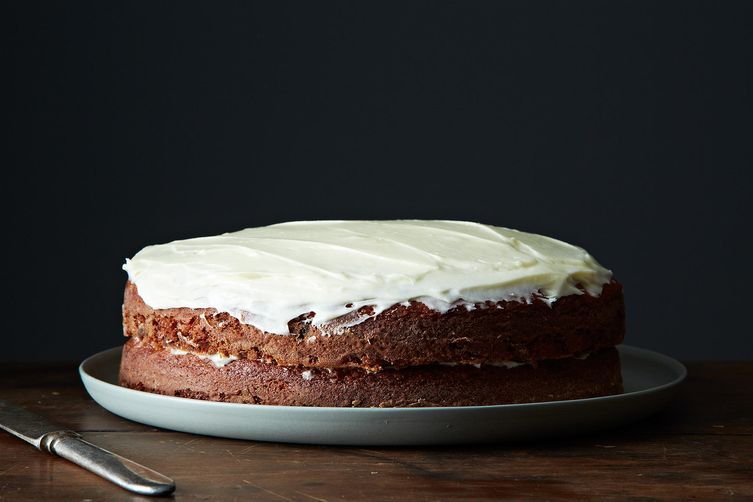 I was supposed to find a picture of my grandmother roughly five weeks ago.

I never got around to it, until a few days back, when I frantically emailed an aunt and an uncle asking for an image, any image, of their mother.

What I received was a photo of my grandmother Ruthie, lounging on a beach, somewhere on Boston's North Shore. Her mouth is big, like mine. She's wearing a killer pair of sunglasses, and she's clearly having the most fun. The photo isn't as elegant or as clear as I was hoping for, but it's all I have, so it will have to do. 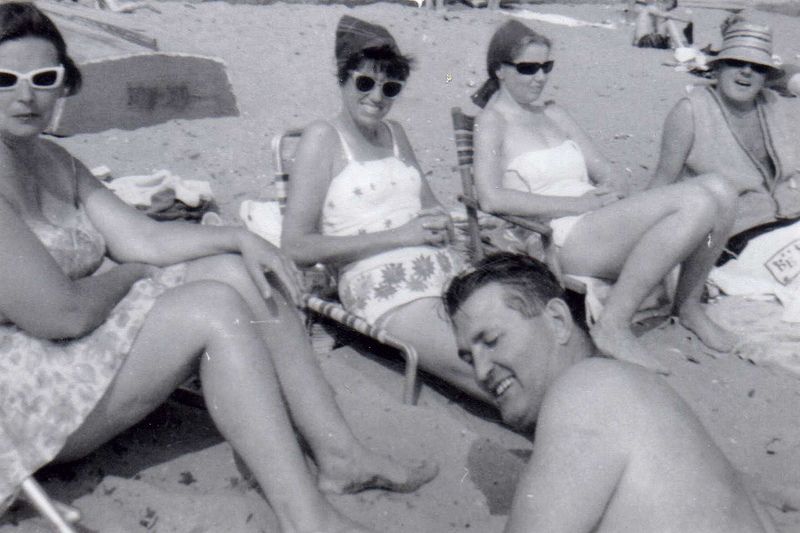 I leave things until the last minute; I get this from my lovely mother. Who, in turn, got much of her charm and compassion and freakish capacity for unconditional love from her mother, Ruthie. She died before I was born, but I carry her name proudly between my first and last.

An Irish Catholic mother of seven whose husband died, too young, from a heart attack, the woman lives on in all of our minds as a saint. She raised seven (loud, rambunctious) children with grace; worked tirelessly; always had an eye out for those around town in need. She brought an Irish sensibility to her resolution to keep going. She put corned beef and cabbage on the table each St. Patrick's Day. And she made this tomato soup cake. 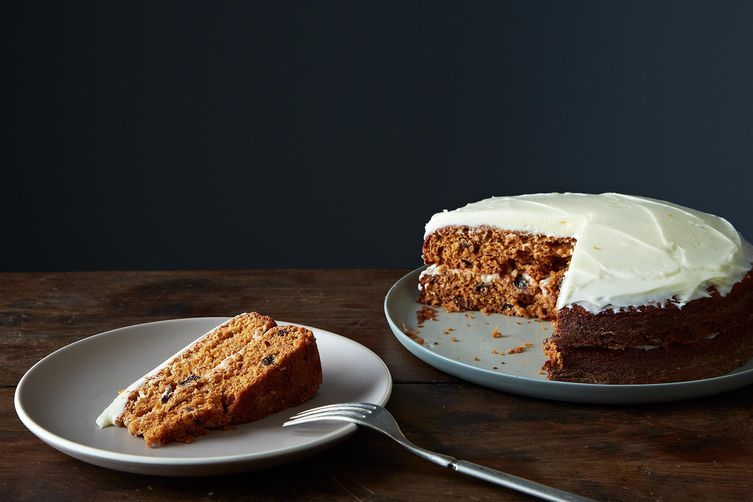 Which, I know, sounds scary. It sounds like it's trying, ostensibly, to push your boundaries, to eke you out of your comfort zone; but it's more resourceful than avant garde, more humble than hilarious. It's more Betty Crocker than Andy Warhol.

The story goes that Irish immigrants devised this cake from a lack of fresh ingredients -- it calls for no milk, no butter. You'll only open your fridge once, to retrieve two eggs; this recipe pays more attention to your spice drawer, and tastes like something you might come across over the holidays. But I suggest you serve it year round. 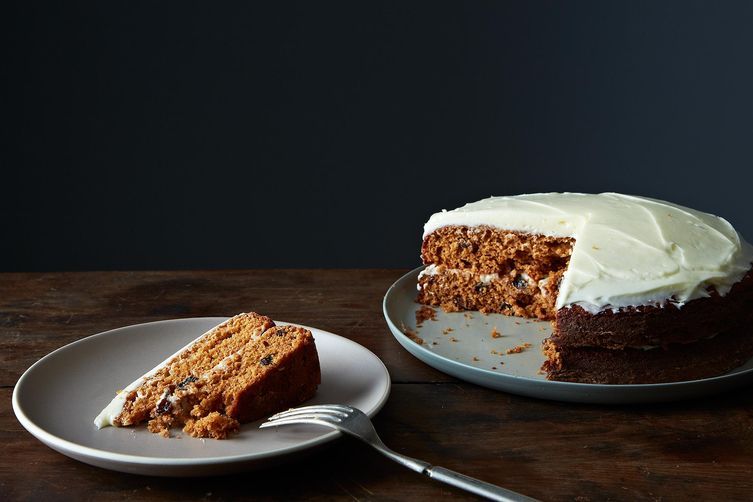 Soup cake is my lone heirloom recipe. I'm proud of its freakishness, its humility. It's an embrace of a cake, and then a joke; a hug and a laugh, just the way I imagine Ruthie would welcome me into her home, had she ever been given the chance.

Dr.Insomnia February 1, 2016
Had never heard of this, and though it sounded weird, I couldn't resist making it and finding out for myself. It's actually a pretty good cake. There is a weirdness to it, especially when you know it is made with tomato. And it would not be sweet enough for (most) American tastes without a good frosting. I went with a typical, heavily sweetened cream cheese frosting with a liberal addition of cinnamon to it to accent the cake. I'll be having a piece of this every night this week.

Marylyn September 10, 2014
Marylyn
My Mother used to make this cake along with Poor Man's Cake. I loved both of them. I just bought Campbell's Tomato Soup today and will make it tomorrow. I can't wait to see how my husband and kids and grandkids like it. What wonderful memories this has brought back for me. Thanks for sharing.

Tiffany K. August 6, 2014
The writing of this article was extremely charming and enjoyable! I'm not intimidated either, I'm ready to take this cake on! Thank you for sharing both recipe and story

audrey T. May 10, 2014
i think i will bake this for Mothers Day and remember....my Mom made ours with peanut butter icing

Hilary F. March 17, 2014
Would this be really strange with chocolate chips? My husband is not a big raisin fan.
Author Comment

SophieL March 17, 2014
I made this cake yesterday afternoon on an impulse because I had all the ingredients on hand, and boy, was it a hit at dinner. The only change I made was baking it in a 13x9" pan for 40 minutes. BTW, my batter was more brownish than pink, but no matter - it was delicious. I took it to work today and people couldn't stop eating it. It's a keeper!
Author Comment

Carole L. March 16, 2014
Go to this website to see the original. http://www.foodchannel.com/articles/article/ritz-celebrates-75th-anniversary-with-mock-nifice/

melissa March 16, 2014
now all we need is the apple pie made with no apples and ritz crackers !! depression era food
Author Comment

diaday March 17, 2014
I haven't purchased a box of Ritz in a long time, but this recipe used to be on the back of the box. It's called Ritz Mock Apple Pie. http://www.snackworks.com/recipe/ritz-mock-apple-pie-53709.aspx

kate72 March 16, 2014
OMG! My grandmother used to make this when I was a little kid, minus the cream cheese frosting because she hated dairy. I always loved this cake but never got around to asking her for the recipe before she died. I'll definetely be making this cake soon. thanks for the memories ;)
Author Comment

Marian B. March 16, 2014
I love hearing how many people ate this growing up! Hope you enjoy trying it again.

Carole L. March 16, 2014
I still have those sun glasses and a bathing suit sort of like the one she is wearing. Eating too much cake has made it impossible to fit into but the glasses can still remind me of Atlantic City in the 50s and 60s. All they needed was bongo drums and it could have been a picture of our crowd in front of the Ambassador Hotel.
Author Comment

Anna March 16, 2014
I will think of your Grandmother when I make this!
Author Comment

karen March 16, 2014
My grandmother made this cake and served it with cream cheese frosting. Good memories.

Carole L. March 16, 2014
The earliest reference in print for this cake was an article in the Los Angeles Times newspaper dated September 18, 1928 in a class taught by Mrs. Maybelle Wyman. This cake was very popular in the early 1920s also.
Author Comment

melissa March 16, 2014
my grandfather disliked tomatoes and cheese ,it was always a secret as to how my grandmother made his favorite cake .. this brought back wonderful memories.. thank you
Author Comment

stingraystirs March 16, 2014
I love the sunglasses too! Gina - do you have a recipe for that eggless, butter less-milkless cake? Just curious. And thanks again Marian. I made your recipe and it was a hit. Still on the hunt for my Grandmother's, which I'm sure is very similar, if not identical. I put an A.P.B. out within my family for the tattered, stained recipe card I remember it being on. A cousin remembers a Campbell's soup can label taped to a greeting card. I'll keep you posted….

gina G. March 16, 2014
This recipe, and its WWII cousin recipe, Eggless-butterless-milkless cake, were the birthday cakes I always asked for as a kid.
I would KILL for those sunglasses.
Author Comment

GraceMargriet March 16, 2014
This sounds delicious and interesting! I am in Europe and I am curious what canned tomato soup I should use. And if I can find it here.. Was it Campbell's? (which I find a bit sweet compared to the canned soup we find here)
Author Comment

Sam March 16, 2014
Great Tomato Cake Recipe. What I love even more than the recipe is the very affectionately you speak of you grandmother. It's very refreshing.
Author Comment

debbie H. March 17, 2014
Sam is right - its not only the ingredients but also the love that went into everything you grandmother cooked. I had a grandmother like that too. Thanks for sharing.

Shelley L. March 11, 2014
OMG, my mom used to make a recipe that appears to be just like this one, back in the 70's. She wasn't a very good cook, but this was one of her recipes that I LOVED!