How to Brine Meat—& Why You Should Bother

The only other question is...are you team wet brine or dry brine?

Have you ever suffered the travesty that is a dry, tasteless chicken breast? Or tried to cut into a pork chop, only to be rewarded with a bicep workout and a rumbling stomach? Or chewed your way through a turkey that tastes like it might've been made out of sand? We have, too. It was unpleasant. Thankfully, it never has to happen again—just harness the power of science, and you can brine your way to consistently better meat. Brining meat should happen at least 12 hours in advance of when you want to cook the meat and can be done with water, salt, and sugar or a dry brine using a variety of herbs and spices. Here's why it works, and how to use our brine recipes for everything from a Thanksgiving turkey to everyday cuts of meat.

Why Do You Brine Before Cooking?

Brining was originally used for food preservation in the pre-refrigeration era. However, there are two solid reasons why you should brine your meat in the 21st-century: flavor and texture. Brining infuses the meat with savory, finger-lickin' flavors, all while tenderizing it to butter-soft texture. So how does it work?

Let us turn back the clock to seventh grade science class for a moment. Does the word "osmosis" ring a bell? That's how brining works: When you place meat in a bath of salty, flavorful liquid, the solution will travel into the meat in order to equalize the salt levels. This means that, before even hitting the heat, your meat has a higher liquid content—so when you cook it, your meat will lose the same amount of moisture, but will still end up juicier. As culinary expert and general food science nerd Harold McGee puts it: "This is one time when we find our old nemesis 'water retention' actually playing a beneficial role!"

While you brine, your meat is not only gaining liquid; it's also gaining salt, and the higher salt concentration will begin to break down its proteins. Think of the proteins in meat as tight, stubborn coils—then salt comes along, gives them a deep tissue massage, and they begin to relax. This yields a meat with a more tender mouthfeel and reduced chewiness. Kenji Alt-Lopez of Serious Eats sums it up perfectly: less tightening = less moisture loss = juicier meat.

What Meat Should Be Brined?

Some cuts of meats benefit from brining more than others. Drier, leaner meats are at the top of the list as cuts that could use a good ole brine, as they don't have as much fat to contribute moisture and flavor. Poultry breasts, pork chops, shrimp, and that infamous Thanksgiving turkey are all good candidates for brining. As barbecue season draws near, racks of ribs are also begging for a briny dip, which will help them retain moisture through a long smoke. Before purchasing a piece of meat to brine, check the label to make sure it hasn't already been injected with a salty solution. On the other hand, tender, smaller cuts of meat like a juicy filet mignon, fatty chicken thighs, and moist, flaky fish don’t really need a wet or dry brine.

How Long Does It Take to Brine Meat?

A general rule of thumb is to leave your meat in its brine for roughly one hour per pound—never brine your meat more than the prescribed amount, lest the proteins break down too far, turning it into unappetizing mush. So for a 12 to 14 pound Thanksgiving turkey, an overnight brine in salt and water or with a flavorful dry rub will do the trick.

How to Wet Brine Meat

The basic ratio for any wet brine is one cup of kosher salt to one gallon of water. Make sure to fully dissolve the salt in the water. If you're feeling fancy, throw in some smashed garlic cloves, peppercorns, citrus (also smashed), or even a sweetener like honey or brown sugar. Or instead of water, feel free to use apple juice, which will give the poultry a sweet, autumnal flavor. Pro tip: If your meat has skin on it (hi, turkey), drain it, then pat dry a few hours before cooking time, and leave in the fridge, uncovered. It will end up juicy and tender, with shatteringly crisp skin that becomes beautifully golden brown when you cook the meat. 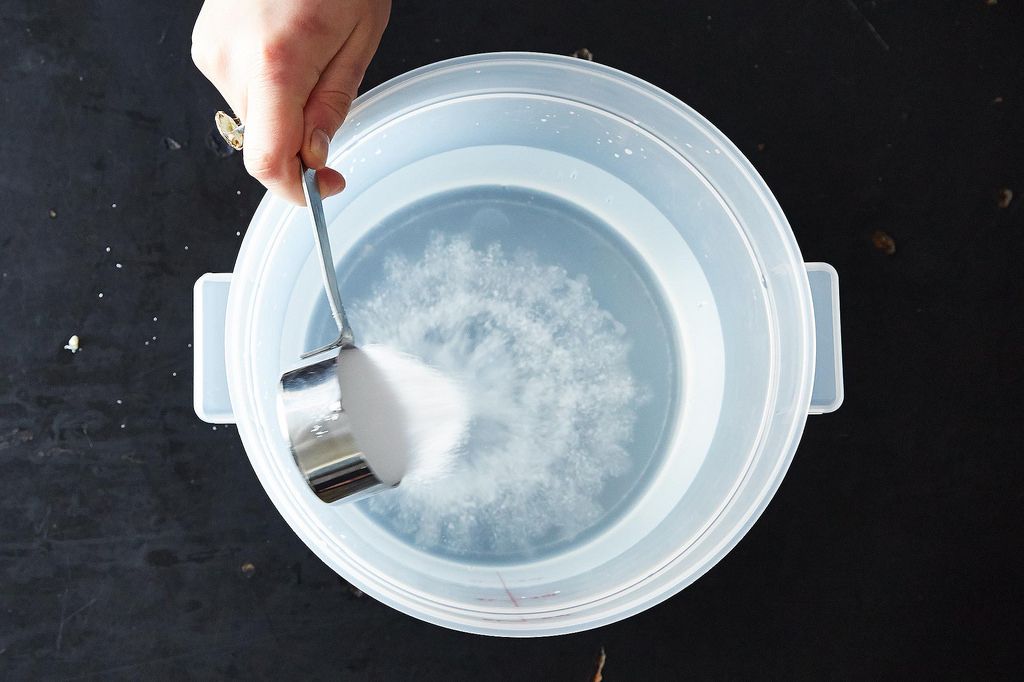 What Is Dry Brining?

Dry brining is technically a misnomer. The term "brining" implies a liquid, and dry brining could more accurately be categorized as a rub, or a "cure," for your meat. However, the end result is quite similar. By coating your meat in a salty dry brine, it both re-distributes moisture and pulls the seasoning deep into the meat. Dry brining is also a clean, simple seasoning option if you don't want to fill your fridge with large containers of submerged meats, for some reason. Like say if you’re my in-laws who once spilled gallons of wet brine all over their newly renovated kitchen on the morning of Thanksgiving, approximately an hour before guests started to arrive at their house. (Oh yeah, true story.) 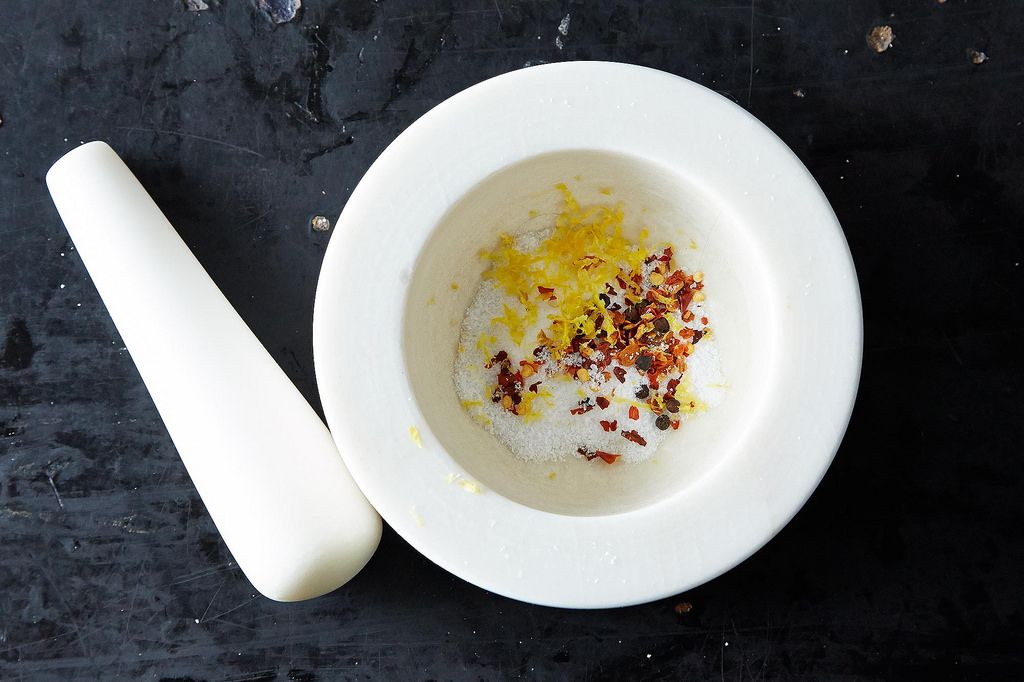 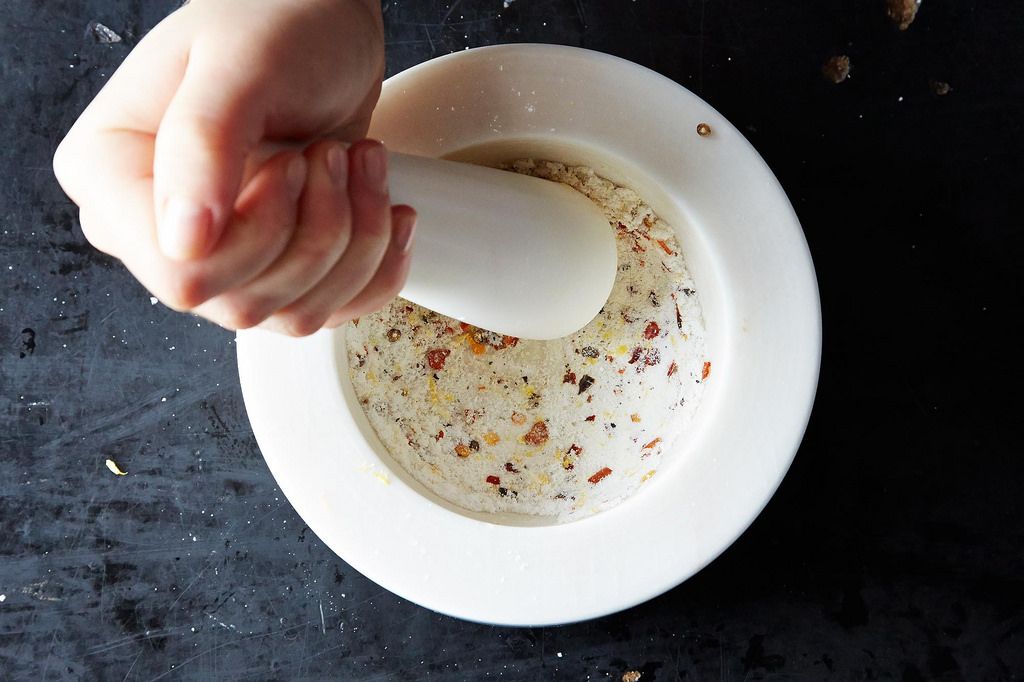 How to Dry Brine Meat

General dry brining technique calls for 1/2 teaspoon of kosher salt per pound of meat, plus whatever other (dried) herbs and spices you so choose. It’s important to use kosher salt as it’s significantly less salty than table salt. Pummel everything into a sandy texture with a mortar and pestle, then rub it onto your meaty canvas. Unlike a wet brine, dry brining a piece of meat takes a little longer.

Place the meat in a very sturdy Ziploc bag and refrigerate for one to 2 days (though if you're in a rush, just leave it in for as long as possible). Pro tip: Adding a pinch or two of sugar to your dry brine will help the meat caramelize as it cooks. 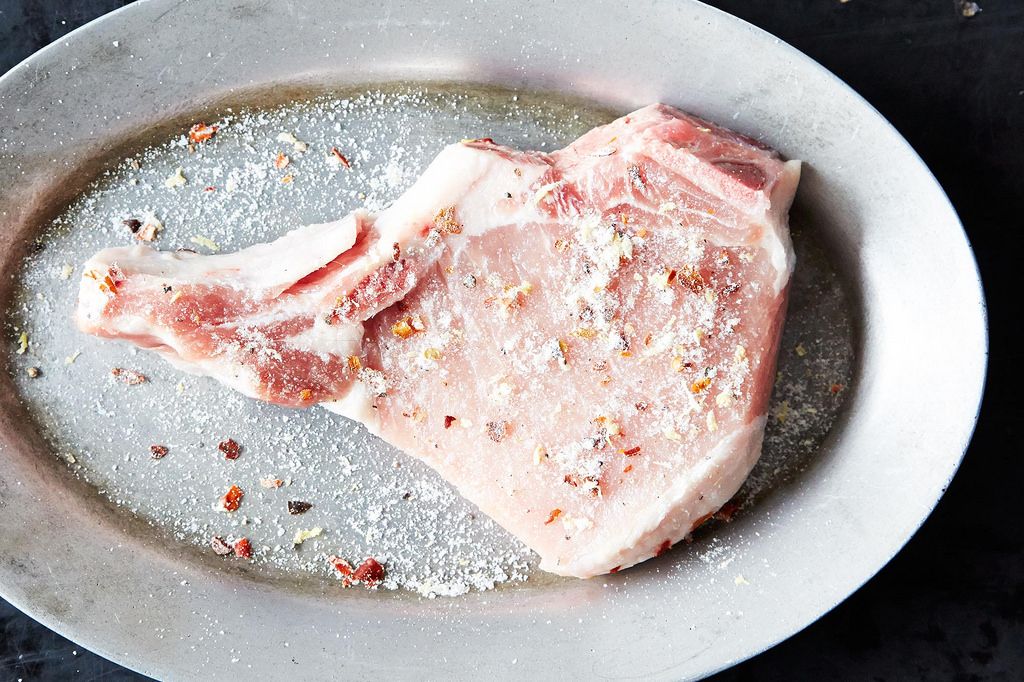 For a basic brine, it’s important to follow a few very important food safety tips. To avoid scary bacteria like salmonella, always brine a piece of meat in the fridge. For the same reason, make sure none of your meat is exposed to the air, as this can increase the likelihood of contracting a foodborne illness. Always let your meat come to room temperature before cooking, as this will ensure that it stays tender and cooks evenly. And finally, if you are brining a turkey in a wet brine, pat it dry with paper towels before placing it in the oven to remove any excess moisture from the skin of the bird and ensure that it crisps up beautifully on the exterior. If you’ve got a brine? It’ll all be fine.

Are you on team wet brine or team dry brine? Tell us in the comments!

drsmith1 July 8, 2021
This recipe or technique is pretty much Kosher meat. The techniques purpose is to draw out the animals left over blood. I have used the technique for chicken and turkey. The technique does result in a crispy exterior and tender interior. I will try the technique to see if it takes 'cheap' meat and makes its more tender. As far as the alt brine ripping up or breaking tough tendons in the steak...I tend to think that it does not.

navarro1950 May 6, 2021
This is more than a question than a comment.
I’m all for bringing but , what about people that
suffer from high blood pressure using so much salt ?
If you reduce the amount of salt will this have some what
the same effect on the meat ?

Cookinggranny December 11, 2020
I watch MeatEater, and even in the field he brines! So, I am going to give it a try. Totally new to brining, but what he was cooking just looked so delicious and tender, can’t not brine! Any ideas on brine recipes?
Suzanna

G35Craig October 2, 2019
Soaking meat in brine is not osmosis. Quite the opposite. Osmosis occurs when a solute (water) passes from a low concentration to a high concentration of salt. Brining is a diffusion process. If it was osmosis the water in the meat would move into the concentrated brine and dry the meat. Chemistry 11.

Maria P. March 31, 2019
I saw a chef on tv he froze his steak in the freezer before cooking it. I tried it and my ribeye always come out perfect

Joyce Y. February 28, 2019
I have high blood pressure so my salt intake is non, by brining my me will it be salty and if so what can I do?

Vanessa April 7, 2019
Buy a fresh papaya, peel it, remove seeds & cut half of it into slices, then mash the slices, put aside. Rub meat with Mrs. Dash seasoning sprinkled lightly & 2 cloves of fresh-pressed garlic, then tenderize the meat by pricking it all over with a fork. In a bowl, mix the mashed papaya with 1/2 c extra-virgin olive oil, then add seasoned meat. Allow it to sit in marinade for at least 2 hours before cooking. The papain in the papaya will break down the meat, tenderizing it as salt would without the sodium. Meat tenderizers all used to contain powdered papain.

Janette T. November 27, 2017
How do you avoid the meat being "exposed to air" while brining and also while letting it come to room temperature?

Samantha A. April 20, 2020
Wrap it in plastic or place on a dish and cover the dish in plastic.

mutton H. June 5, 2017
I guess was trying to assess the depth of the marinade--
as in a smoke ring. .This is artical is very nice..Thanks for sharing the post..

Ash W. May 30, 2017
In my experience wet or dry brining is superior than just cooking and seasoning. Seasoning and salting takes time to penetrate meat. Do you notice that leftover often taste better? Because the seasoning has penetrated meat and vegetables more. Brining also reducing bacterial content in meat which also enhances flavor and digestion.

Dean P. March 3, 2017
I don't understand why you want the meat at room temperature. I haven't brined yet, but I grill my meat frozen solid...outside is nice and charred, inside stays moist. If the meat isn't frozen, I use it as cold as possible to preserve moisture and slow the cooking of the inside. Works for me.

James C. January 22, 2017
By definition brining should remove water from the meat as the salt(/sugar) solution is a low water concentraton compared to the concentration of the salts and sugar in the meat. The meat would have a high water concentration so water would leave by osmosis. I think that brining allows the flavour molecues to enter the meat by diffusion and the muscle fibres to relax as well as preventing the growth of bacteria on the meat. That is the science, the rest is simply magic.

Meredith November 17, 2016
Technically osmosis is the movement of water from high concentrations to low concentrations. Seasonings get pulled in as easily because they're bigger than water molecules.

Jay November 11, 2016
Thanks. I have made a mistake with marinating too long.
wasteful. I guess was trying to assess the depth of the marinade--
as in a smoke ring. I appreciate your response.

James A. November 10, 2016
the longer the amount of time in the brine, the deeper into the meat it goes.
If you leave stuff in a standard brine too long, though, you can ruin it. If time is not an issue, use an equilibrium brine. This requires 20 to 30% more time or as long as you want to leave it (within reason). Take the total weight of your meat and enough water to submerge it and make your salt .25% to 1.5%. Stay on the low side for seafood and the higher side for chicken-pork.